The Sony KDL-47W805A is a 47-inch set from the second tier of Sony’s new full HD TV range. It differs from the flagship Sony KDL-55W905A W9 series tested recently by not employing Sony’s new Triluminos colour system, not using local dimming in its edge LED lighting and, intriguingly, shifting to a passive 3D system.

In fact, the Sony KDL-47W805A is the first passive 3D TV Sony has ever launched in the UK – a symptom, perhaps, of Sony’s new-found and much-appreciated interest in offering people more choice rather than just trying to make everyone buy what Sony thinks they should buy. 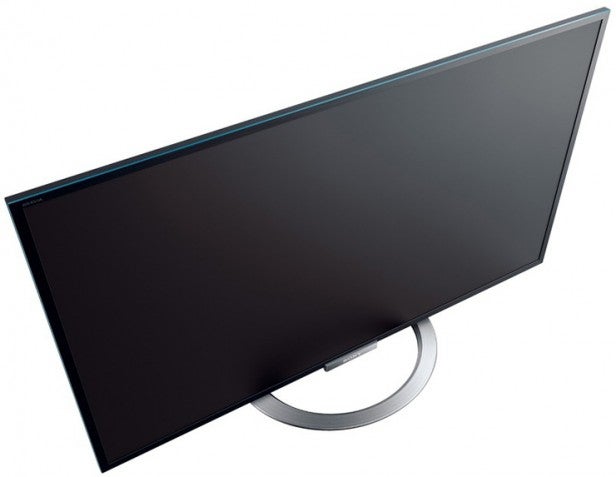 The Sony KDL-47W805A picks up the ‘Sense of Quartz’ theme introduced by the W9 series, as it has a narrow, angled and undoubtedly attractive turquoise trim around the TV’s extremities. The set’s bezel is quite slim too – not as tiny as the ones wrapped around the latest Samsung, LG and Panasonic TVs, but it’s certainly trimmer than Sony has tended to go with previous designs.

Also earning the Sony KDL-47W805A style brownie points is its elegant circular loop stand, and the cute ‘intelligence centre’ silver block that rests under the centre of the screen’s bottom edge. It’s in here that Sony has housed the TV’s powerful processing engine – including the latest version of Sony’s esteemed X-Reality PRO system. As with the W9, the colour emitted by LEDs along the Intelligence Centre’s bottom edge changes in response to the source type you’re watching.

The Sony KDL-47W805A connections are satisfactorily numerous, with highlights of four HDMIs, three USBs, and both wireless and wired network connections able to stream content from networked PCs and take you online with Sony’s latest SEN (Sony Entertainment Network) platform.

Some of these connections, surprisingly, stick straight out of the TV rather than being accessed from the side, which could present problems for people wanting to wall-hang the TV. Though in reality most people with modern home entertainment systems should be able to avoid these ‘outy’ connections and stick with the side-mounted ones.

We’ve already covered a few of the Sony KDL-47W805A features, but there’s plenty still left to say. Perhaps the most concerning element of the 47W805A’s specification from a picture quality point of view is its move away from the local dimming edge LED system that served both the Sony KDL-55W905A and Sony KDL55-HX853 models so well. Hopefully this won’t lead to a severe reduction in the screen’s contrast.

The reappearance of Sony’s X-Reality PRO processing engine, though, is very welcome. This proprietary Sony system draws on a huge database of picture quality ‘examples’ to streamline the process of adapting the TV’s video processing to deliver the optimal performance with any source type you chuck at it.

Sony has thoughtfully provided the tools in its much-improved (versus 2012) onscreen menus for tweaking many elements of the X-Reality system, including the extent to which it boosts the resolution of the source it’s working on and the amount of noise filtering it applies.

Sony’s new smart TV interface, meanwhile, is a mixture of good and average. We’ve covered the system in a dedicated Sony Smart TV 2013 review, so we won’t get too deep into it again here.

But briefly, the good stuff concerns the amount of streaming video content available (including the BBC iPlayer, LoveFilm, NetFlix, Sony TV Entertainment, Sony’s Video and Music Unlimited services, and Demand 5), an excellent ‘Fast Zapp’ system for quickly scanning through TV programmes and on-demand content without interrupting your current viewing, and the presentation level of Sony’s TV Side View control/content sharing app for Android and iOS devices.

Also appreciated during our tests was the second, streamlined remote control Sony ships with the TV, and the way this remote control allows you to mirror on the TV the screen of any NFC-capable second devices you might have – such as the Sony Xperia Z phone – just by tapping the two devices together.

The less impressive stuff concerns the current inability to share what you’re watching on the TV with the screen of your tablet PC or smartphone, and the rather haphazard way all the available apps are ordered in the TV’s onscreen menus, meaning that you sometimes have to scroll through many rows of icons you don’t want to get to the one you do.

Used as the main TV for the review period
Tested for more than a week
Tested using industry calibrated tools, discs and with real world use
Tested with broadcast content (HD/SD), video streams and demo discs
Next
Performance Review