With Sony just announcing that it’s willing to give you a ‘scrappage’ value on your old duffer of a TV if you trade it in for a new Bravia, today seems the perfect time to check out a set from the Japanese megacorp’s latest TV range: the 200Hz-sporting, 46in 46Z5500.


If you’re thinking that it doesn’t seem all that long since Sony seriously started pushing its previous 200Hz screens, the Z4500 range, you’d be right; the brand’s (in)famous Kaka/zoetrope campaign only really kicked into full swing in the first quarter of this year. But don’t worry; Sony isn’t rushing its second generation of 200Hz TVs out because of any major problems with the original TVs – honest!


In fact, as proof of this, the Z4500 range is continuing to run alongside the new Z5500 range, as a cheaper alternative. The idea with the 46Z5500, then, is to deliver a step-up 200Hz experience. Something that it seeks to achieve in a number of potentially significant ways.


The most instantly obvious sign of the 46Z5500’s relatively high-end status can be seen in its design. For starters, its bezel is impressively thin; barely an inch across on the top, left, and right sides, and only a couple of inches along the bottom edge. 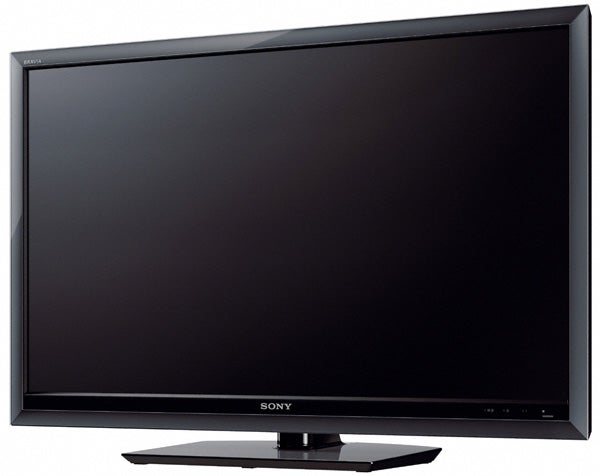 The bezels’s shiny, slightly opaque finish atop a deep grey colour is also striking. Plus, of course, there’s the trademark (deactivatable!) illuminated Sony logo along the bottom edge.


The 46Z5500 also improves on Z4500 models by providing four HDMIs rather than three, and by making its Ethernet port able to access Sony’s (currently rather limited) AppliCast online service, as well as material stored on a DLNA PC. The Z4500’s Ethernet port didn’t offer any online functionality.


Fans of mother nature, meanwhile, will be pleased to hear that the Z5500 series are claimed to consume as much as 35 per cent less power than their older siblings, and even sport an energy-saving ‘picture off’ option if you’re listening to MTV or something that doesn’t really need pictures. Trees will be gratified to note, too, that the Z5500’s instruction ‘manual’ is actually tucked away within the TV’s onscreen menus, rather than being splashed across loads of tree-munching sheets of paper.


If you’re more interested in picture quality than saving the planet, the 46Z5500’s most important improvement over the Z4500s is its Bravia Engine 3 video processing. I’ve found BE3 to be a large leap forward over the Bravia Engine 2 system sported by the Z4500 models, particularly when it comes to processing speed and suppressing noise, so it will be interesting indeed to see how BE3 ties in with the 200Hz engine.

If there’s a disappointment to be found in the 46Z5500’s up-front ‘story’, it’s that the 200Hz engine itself doesn’t appear to be any different to that used by the Z4500s. But then this engine is a genuine 200Hz system, rather than the ‘pseudo 200Hz’ systems sported by most rivals (except for Samsung). What’s more, it seemed to work very well on the Z4500s, so I guess the old ‘if it ain’t broke, don’t fix it’ adage could well apply.


Other bits and bobs worth covering briefly here, even if they don’t represent any new ground for the 46Z5500, include multi-level MPEG and standard noise reduction systems, a black level corrector, a contrast enhancer, gamma fine tuning, a white level booster, a Wide colour space option, and Sony’s Live Colour system for delivering more natural and vibrant colour tones.


Even though I was quite a fan of the Z4500 range, it’s obvious right away that the 46Z5500’s picture performance is markedly better. 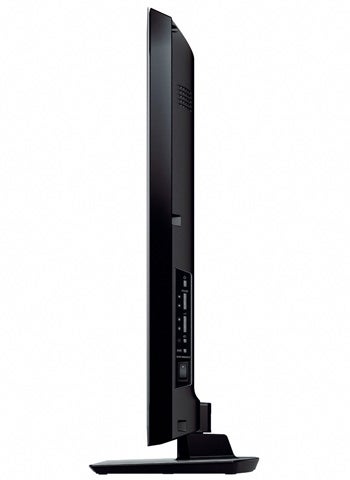 The single greatest reason for this is the image’s clarity. For where I had cause to bemoan a little smearing and trailing when showing extensive amounts of motion with the 46Z4500, this seems to have been almost completely eradicated by the 46Z5500.


I can’t be 100 per cent certain why this should be the case, especially as I haven’t been able to find out if there’s any difference in the native refresh rates of the Z4500 and Z5500 ranges. But I suspect it’s down to the 46Z5500’s use of Bravia Engine 3 rather than the less potent Bravia Engine 2.


Backing up the improved motion handling in producing images of truly excellent clarity is an exceptional talent with portraying every tiny detail of HD sources. Even standard definition pictures look sharp and textured thanks to Bravia Engine 3’s upscaling capabilities. 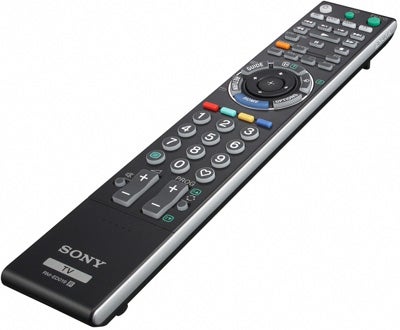 The 46Z5500’s black levels also seem slightly more profound than those of the 46Z4500 – no mean feat given that the 46Z4500’s rendition of dark scenes was itself impressive. There seems even less greyness hanging over black elements of the picture, and the 46Z5500 is also better at producing shadow details during dark scenes – probably because it doesn’t seemingly need to reduce brightness as much as the earlier model in order to produce a convincing black colour.


The Bravia Engine 3-inspired improvements continue with the 46Z5500’s colours too, which combine similar levels of vibrancy and intense saturation with a seemingly slightly wider range, resulting in colour tones even more consistently natural than those of the 46Z4500.


The relative authenticity of the 46Z5500’s 200Hz engine, meanwhile, means it suffers likeably little with processing side effects. I spotted none of the ghostly second and third cricket and tennis ball ‘echoes’ sometimes witnessed with ‘200Hz’ TVs that use scanning backlights, and nor is there much evidence of the edge flickering/shimmering halo phenomenon seen with so many motion processing systems. So long, at least, as you leave the MotionFlow option set to its Standard and not its High preset.

Overall, when they’re at their best – with a quality Blu-ray image – the 46Z5500’s pictures are nothing short of sensational.


But before you get too carried away, the 46Z5500 doesn’t always look its best…


The most distressing flaw by far is more evidence of the backlight consistency issue that’s so blighted a number of Sony TVs in recent years. On our test screen, when watching a very dark sequence like the opening black and white sequence from ”Casino Royale”, there are some quite large patches of the screen that look slightly brighter – or greyer – than others.


I know what Sony will say to this; that all LCDs struggle to some extent with this problem, and that in any case the inconsistency is so subtle that you can only detect it when viewing very, uniformly dark material of the sort that only rarely crops up in normal viewing conditions. 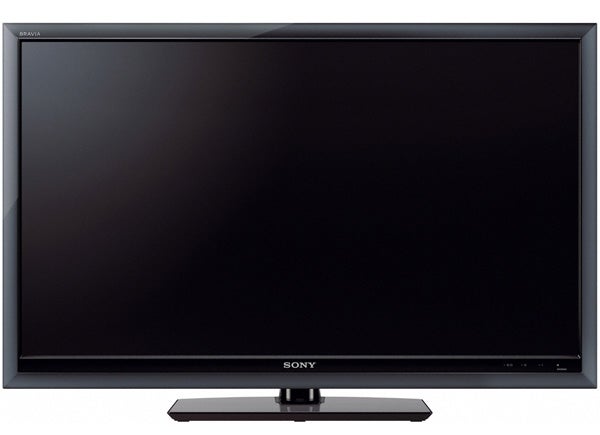 But while it is indeed true that you won’t register the flaw for 99 per cent of your viewing time, just about every film you care to mention contains at least a few very dark sequences. And when the problem appears, it inevitably distracts you from what you’re watching.


As for the argument that backlight inconsistency is a common problem, I’m sorry, but I can’t think of any other premium TV from any other mainstream brand right now that suffers from the phenomenon as obviously.


It could, of course, be the case that the 46Z5500 sample we tested was an early production model rather than a final production line release, and that the ‘finished’ screens will have sorted the problem out. I’ve witnessed a similar situation with one or two previous Sony screens I’ve tested over the past year or so.


But somehow I just don’t feel that this explanation applies to the 46Z5500. And even if it does, after getting so much flak for the problem for so long now, Sony has nobody to blame but itself for sending out a duff early sample again.

Regarding the 200Hz processing, meanwhile, the final Ashes match again shows how cricket has an uncanny knack of catching out motion processing systems. For on regular occasions, when the ball is crashed towards the boundary with the MotionFlow system engaged, it actually almost disappears, as if David Copperfield is on the pitch somewhere. This is especially true when the ball travels over the light-cut sections of the pitch where practice wickets lie. (Hopefully all this cricket-speak isn’t going over your head if you’re not a sports fan!)


As a result of this issue, I’d strongly recommend turning MotionFlow off completely when watching any sport involving a ball smaller than a football. 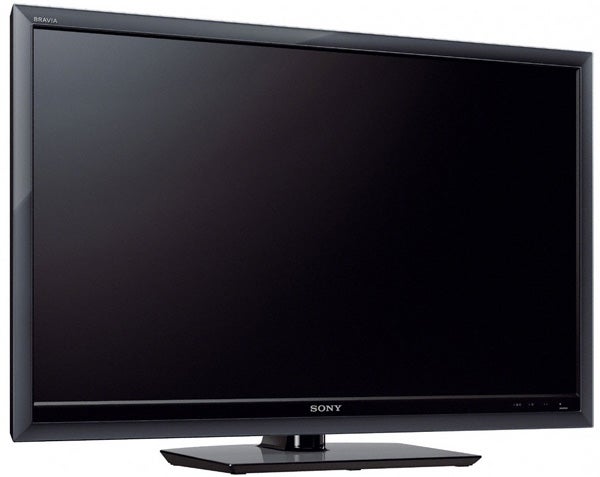 With this in mind, it’s a relief that although not quite as crisp or judder-free, the 46Z5500’s MotionFlow-free pictures are still impressively free of LCD’s common motion blur issue, and so remain extremely watchable. Especially in HD.


My other main issue with the 46Z5500 is that while standard definition pictures look exceptionally sharp by Full HD LCD standards, they also seem to slightly exaggerate MPEG noise in digital broadcasts. Obviously you can reduce this issue by using the provided MPEG noise reduction. But be warned that this tends to make the picture look softer.


Turning at last to the 46Z5500’s audio, it’s a respectable rather than spectacular effort. In the positive corner, treble detailing is precise, and the soundstage has surprising width and depth. But bass isn’t very meaty, the soundstage can’t expand to any great degree to add ‘oomph’ to action scenes, and male voices can sound a little muffled, even during relatively quiet scenes.


There’s a big part of me that wants to love the 46Z5500. For as well as looking resplendent in Sony’s most appealing design for ages, the set’s 200Hz processing is excellent, and its HD pictures in particular are for the vast majority of the time really quite superb.


But no matter how tempted I might be, in the end I just can’t give a TrustedReviews Recommended badge to a TV costing the best part of £1650 that suffers with marked backlight inconsistencies – however rarely they might affect day-to-day viewing.