If 2010 proved one thing where Sony was concerned, it’s that the brand is back in the innovation game. It delivered the UK’s first Freeview HD TV, it took online TV to a whole new dimension, and right at end of the year it gave us the 40EX43BU: the first TV in the UK to sport a built-in Blu-ray player.


This makes plenty of sense, of course. For if there’s a ‘Holy Grail’ of AV for your average compact living room, it’s reducing clutter. What’s more, with the price tag of just £571.65 that we’ve found online, the 40EX43BU is cheaper than getting a decently specified 40in Sony TV and Sony Blu-ray player separately, so you can feel like you’re getting a genuine bargain as well as leaving your room looking neater. 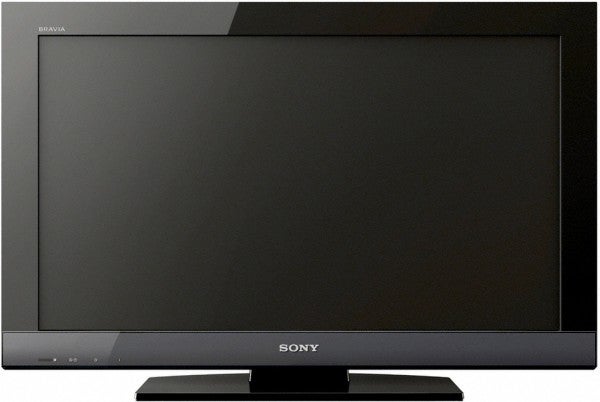 Of course, there’s a good chance that the performance of either the Blu-ray deck or the TV will be compromised in some way by having both crammed into a single chassis. It will be especially interesting to see what if any effort the TV makes to accommodate Blu-ray’s high def audio potential. But then to be fair, it’s likely that anyone buying this set will realise that some degree of performance compromise will be involved with their convenience-based decision, especially at under £600. So unless anything gets truly disastrous, we’ll probably feel inclined to cut the 40EX43BU a little more slack on the performance front than normal.


Aesthetically the 40EX43BU’s design hasn’t been compromised provided you’re looking directly at it. It wears the same mix of gloss black and smokey grey that we’ve seen on numerous other Sony models of late – except the relatively high-end ones that come dressed in Sony’s striking, all-black ‘Monolithic’ design.


Aside from a small Blu-ray logo on the bottom right corner of the 40EX43BU’s fascia, the main visual signs of the set’s combi nature are reserved for its rear, which boasts a disc slot on the right edge, and sticks out considerably more than most modern TVs – well in excess of 100mm.


As might be expected of a combi product, the 40EX43B carries three HDMIs – one less than most of Sony’s other current TVs. But there’s no sign of compromise elsewhere, at least where video and multimedia connections are concerned. A USB port, for instance, can play JPEG photo, MP3 audio or DivX, AVCHD and MPEG4 video, as well as potentially making the TV Wi-Fi capable via an optional USB dongle.


There’s also an Ethernet port, there first as mandatory support for a built-in Freeview HD tuner. But it also enables connectivity and file playback from a DLNA PC and, even more pleasingly, it enables you to jack into Sony’s excellent Bravia Internet Video service.


Having covered BIV regularly, including in our online TV update feature a week or so ago, we won’t go into detail on it again here. We’ll just mention its highlights – the BBC iPlayer, Demand Five, YouTube, the LoveFilm and Qriocity movie on demand services, plus Sony World of Television – and add that for us it’s currently the most consistently engaging online system currently available on a TV.

The only area of connection weakness – if it’s really fair to call it that – concerns the TV’s audio output. For while it has an optical digital audio output allowing you to enjoy Dolby Digital 5.1 from your Blu-rays, there’s no way of getting HD audio from Blu-rays to a suitable AV receiver. But then to be honest, it’s unlikely that someone getting a combi product like this will be decked out with a full-on surround sound home cinema system anyway – or at least, a sound system potent enough to benefit from the joys of HD audio.


The first sign of any potentially important flaw in the 40EX43B’s makeup comes with the discovery that it doesn’t have any 100Hz – or higher – video processing, raising concerns about potential motion blur. 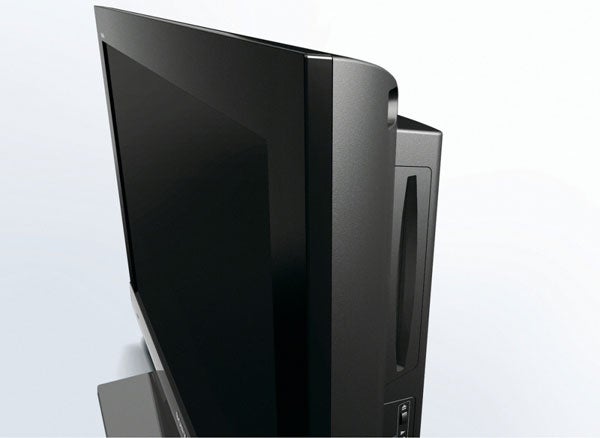 The 40EX43BU certainly isn’t devoid of video processing, though. Thankfully it retains Sony’s 24p True Cinema mode for Blu-ray playback – handy given the nature of its inbuilt disc drive. Plus it carries Sony’s Bravia Engine 3 system, which experience has shown to do a fine job of improving a wide variety of picture elements, from colour through to detail and contrast.


Other key facts about the 40EX43B are that it uses standard CCFL backlighting rather than any sort of LED system (hardly surprising given how affordable it is); that it’s got a full HD native resolution; and that it supports PC connection via D-Sub and HDMI ports.


In action the 40EX43B falls less far short of Sony’s standalone TVs and Blu-ray players than we’d expected, thanks to some really startlingly good picture quality.


Kicking off, perversely, with some HD broadcasts via both a Sky HD box and the built-in Freeview HD tuner, we were truly and instantly startled by a number of picture positives.


First up, the image is detailed, sharp, and definitively HD. What’s more, this sense of ‘HDness’ only slips slightly when the TV has to handle lots of motion, despite the absence of any 100Hz processing. In fact, there seems markedly less motion blur and smearing around than we noted recently with Sony’s (in many ways similarly specified) 37EX403.


Also noteworthy are the 40EX43BU’s colours. For they seemingly effortlessly combine impressive richness and vitality with winningly natural tones and even a much greater degree of subtlety than you’ve any right to expect for the TV’s money. This has a particularly positive impact on skintones, which look believably textured and wrapped around people’s faces and bodies rather than patchy or one-dimensionally waxy. 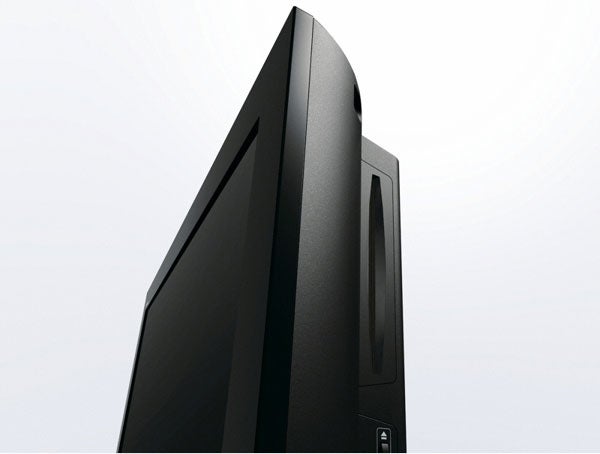 The 40EX43BU’s HD pictures look impressively clean, too. The only grain you see is what’s supposed to be in the picture, and there’s no sign of MPEG noise or ghosted edges.


There’s a touch more judder around than you get with Sony’s 100Hz (and higher) TVs, but it’s only very seldom seriously distracting.


The 40EX43BU’s impressive HD broadcast performance is unsurprisingly bettered by its Blu-ray performance. Blu-rays look even sharper and less prone to noise, and the 24 True Cinema processing tidies up motion without leaving anything looking unnatural or forced.

It’s worth adding here, too, that using the Blu-ray deck is impressively easy. It gets its own icon in the double-axis onscreen menu system, so there’s no need to get involved with complicated button routines or delving into too many submenus. The only pity is that there doesn’t seem to be any playback resume system, so if you, say, flick briefly to watch TV and then flick back to the Blu-ray you were watching, you’re right back at the start.


The 40EX43BU isn’t quite as accomplished with standard definition as some of Sony’s higher spec TVs, leaving pictures looking a touch soft. But aside from some over-stressed edges at times, standard def pictures do look pretty clean. And we’d rather have the slight softness than nasty, distracting levels of noise. 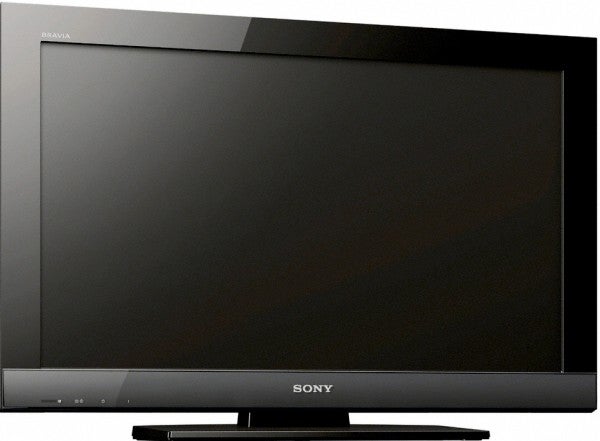 The 40EX43BU’s weakest picture link is its black level response. There’s a little more greyness over dark scenes than you get with the very best LCD screens – especially those that use LED technology – and a little crushing in the very blackest areas that squeezes out some shadow detail. This grows, as usual, if you have to watch the TV from an angle.


However, it must be stressed again that we’re talking not only about a combi product here, but a startlingly affordable combi product. And in this context the 40EX43BU’s black level response is really rather good – especially if you apply the brakes to the brightness and, especially, backlight settings. It’s a relief to see, too, that there’s only the most minor evidence of the backlight consistency problems we’ve found with far too many TVs in recent months.


Perhaps inevitably, the 40EX43BU’s audio is markedly less impressive than its pictures. So far as we can tell the speaker system it employs is no different to that found in Sony’s other mainstream TVs, and as such it’s not capable of delivering any real sense of the audio prowess Blu-ray is capable of. Blu-ray films don’t sound better than a quality drama on the BBC. In fact, they arguably sound slightly worse, as the speakers struggle to handle Blu-ray’s extra dynamics. Plus, as devout movie audiophiles with a huge pile of hungry speakers to feed, we definitely missed not being able to get any HD audio from our favourite Blu-ray films. 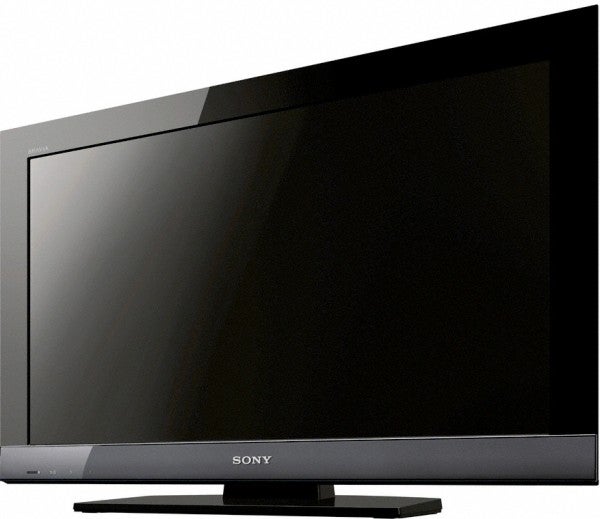 Again, though, to heavily criticise the 40EX43BU along these audio lines is to deny what it is and who it’s aimed at. Put in its proper context, the 40EX43BU’s sound is certainly adequate if not exactly mindblowing.

Our first proper TV review of 2011 has got the year off to a surprisingly good start. For while the 40EX43BU won’t suit everyone and doesn’t by any means set new standards for picture or sound, it does do a great job for its target audience of combining two of the AV world’s hottest properties. So much so that even if you had to stick with Sony’s £750 recommended price it would look good value; at the comfortably under £600 price level we’ve found it going for, it’s nothing short of a steal.