While public interest in 3D TV seems to ebb and flow, one thing that’s never been in doubt is that the manufacturers themselves are excited about 3D. Or at least that was the case until today.

For while the likes of Samsung, Panasonic and LG have all in their (very) different ways delivered significant advances in 3D performance and technology already this year, on the evidence of its brand new KDL-32EX723, Sony hasn’t bothered to improve its 3D pictures at all. In fact, they might even be slightly worse. Yikes.

We wouldn’t usually start a review by talking so strongly about an aspect of a TV’s performance. But in this case we feel compelled to make it clear right away that if you’ve come to this review in the hope of finding a good small-screen 3D option, you’re in the wrong place. The 32EX723’s 3D pictures are pretty horrible, frankly; a headache-inducing, ghost-riddled mess made all the worse by the fact that they’re appearing on a 32in screen. 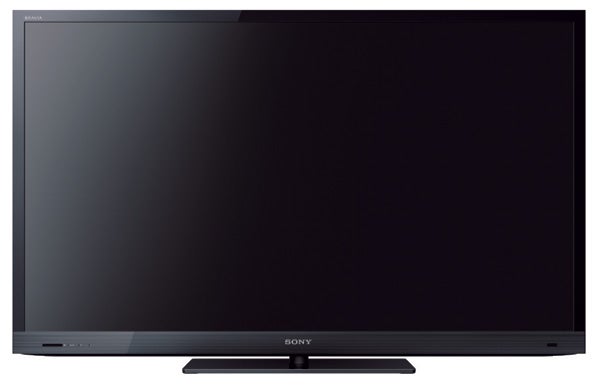 To be more specific about this, numerous objects in 3D frames routinely appear with serious crosstalk – ghostly echoes of themselves clearly visible to the side of the ‘proper’ object. Backgrounds, meanwhile, regularly look like an out of focus mush thanks to the cumulative effect of multiple crosstalk areas over parts of the picture you’re not focussing directly on.

Not surprisingly this rapidly causes eye fatigue, as your eyes keep refocusing in an unsuccessfully bid to make the ghosting go away. The fatigue situation is made worse by the relatively small scale of the screen, too.

As noted in our review of the Panasonic L32DT30, moreover, watching 3D on a TV as small as 32in changes the experience from one of being immersed in a 3D world to the less satisfying one of looking through a little 3D window. 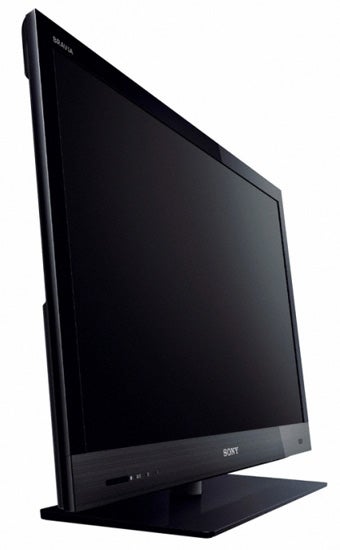 To rub all this 3D dissatisfaction in, the 32EX723 doesn’t ship with any of Sony’s new rechargeable active shutter glasses included as standard, meaning that if you want to see for yourself how unacceptable the 32EX723’s 3D pictures are, you’ll need to cough up an extra £100 for each pair of glasses you need.

We guess you could argue that if you’re not bothered about 3D, then you could just get it for its much more satisfying 2D performance (more on this later). But the 32EX723 does have a 3D transmitter built in, so while £634.90 isn’t crazy money for a 2D only 32in TV, you’re bound to be paying at least a little for its 3D functionality.

If you’re still reading this review, then we guess you’re either enjoying the writing (in which case, cheers!) or, more likely, you came to this review more interested in the 32EX723 as a 2D Sony TV. In which case you’re doubtless impatient to leave our 3D rant behind and get on to the rest of the review. So here we go.


In design terms the 32EX723 is good without setting the world on fire. Its combination of a black, glossy bezel for the top and sides offset by a grey finish to the bottom edge is very en vogue, and looks perfectly pleasant. Plus the set is attractively slim thanks to its edge LED lighting. Its build quality feels a little flimsy in places, however.

Connectivity is very good, though. There are four HDMIs, for starters, offering v1.4 compatibility so they can take in full HD 3D signals. Two USBs, meanwhile, let you play back video, photo or music files from USB drives, or record to USB HDD from the integrated Freeview HD tuner. Actually, it might have been handy if Sony had given us three USBs, as the set can also be made Wi-Fi capable via an optional USB dongle. 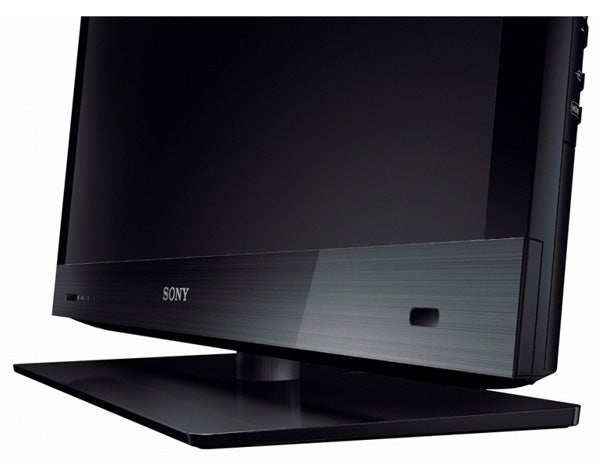 The real star of the connection show, though, is the set’s LAN socket. For if you use this to jack the TV into your router, then the 32EX723 can deliver you into Sony’s latest Bravia Internet Video (BIV) system.

Funnily enough, like the sub-standard 3D performance, Sony hasn’t really changed BIV all that much. However, unlike the 3D situation, Sony could argue with BIV that if it ain’t broke, there’s no need to fix it. For while 2011’s BIV engine might (currently, at least) lack the amount and variety of apps of the recent Viera Connect and Smart TV systems from Panasonic, Samsung and LG, it retains the key ace that made us such fans of BIV last year: a single-minded focus on video.

This matters because the more we use online TVs, the more convinced we feel that the online stuff we most want on a TV is video playback. Especially catch up TV services, of which the 32EX723 has two: the BBC iPlayer, and Demand 5.

BIV’s main change has come with its interface, which is much improved over last year’s tedious ‘list’ approach. Now you get a collection of multiple iconic channel ‘headers’ at once, making it easier to see at a glance all the functions available, and quicker to get to the options you want.

The new menu system lacks the sophistication and ability to handle simultaneously huge numbers of options like recent new Smart TV menus we’ve seen from LG and Samsung can. But it’s arguably better suited to mass market sensibilities out for an easy, video-centric life.

In fact, as if to underline this ‘simplicity is best’ point, the one big new online feature of the 32EX723, its Internet browser, is deeply flawed. For even if you set the browser’s text to large, it’s still almost impossible to read.

A couple of more fun offshoots of BIV are facilities that let you either look up information on cast or crew members associated with a programme you’re watching, or let you track down a piece of music that’s playing on the TV just by pressing the TrackID button on the remote control. TrackID proves so scarily accurate, in fact, that it actually becomes addictive.

Despite its 3D problems, the 32EX723 isn’t entirely without interesting specs. For a start, it’s got Sony’s new X-Reality processing, which adds a new detail-enhancement refinement to Sony’s Bravia Engine processing. There’s a two-chip incarnation of X-Reality that adds PRO to its name, designed to improve the quality of Internet video. But this is reserved for models further up Sony’s new range. 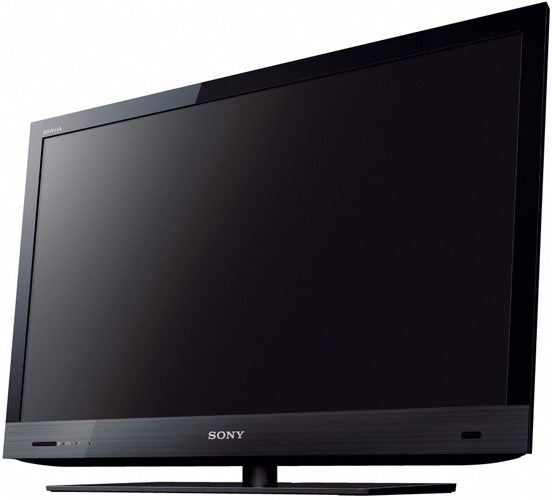 Happily, for the most part these specs come together to produce a likable 2D performance. It enjoys a decent contrast range, for instance, with punchy peak whites and reasonably dynamic colours resting within the same frame as reasonably dark blacks. As usual with edge LED TVs there’s a touch of backlight inconsistency visible during very dark scenes. But provided you’re sensible with the TV’s contrast/brightness settings, this inconsistency is limited to pretty subdued, small patches of extra brightness in each bottom corner, and so only seldom distracts you.

Colours are natural and subtly defined as well as being vibrant, and detail levels are good. In fact, they’re especially good versus the competition when it comes to showing standard definition sources, suggesting that X-Reality is definitely a worthwhile addition to Sony’s processing toolset. 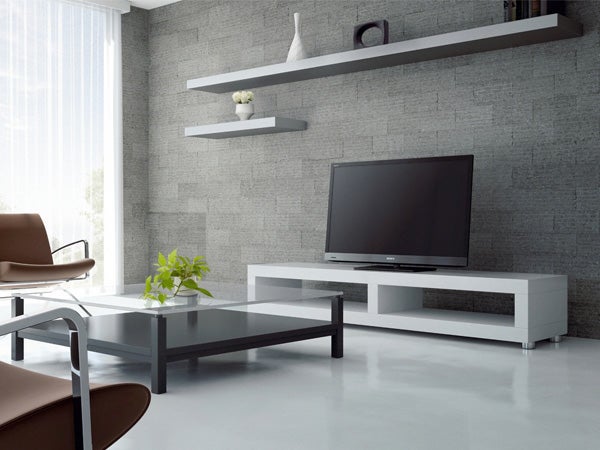 The generally good resolution holds up even during sequences containing lots of motion. Haters of motion processing will be pleased to hear that the screen’s fundamental response time is good enough to avoid much blurring or resolution loss without the MotionFlow system engaged. But in what seems to be a growing trend this year, we’d politely suggest that you don’t completely write Sony’s motion processing off without trying it, at least on its Clear setting. For in our opinion it can slightly boost motion performance and clarity while leaving the image looking credible and natural.

The one time you probably shouldn’t use MotionFlow for sure, though, is when gaming, for otherwise you’re unlikely to hit the acceptably low 40ms of input lag we measured using the TV’s Game mode.

Issues with the 32EX723’s pictures include a sense of lost shadow detail during dark scenes, and the fact that while colours are, as noted before, ‘reasonably dynamic’, they’re not as aggressively saturated as those of some rival edge LED TVs. This could, we guess, leave pictures looking marginally muted if you’re wanting to put the 32EX723 in a very bright room environment. But to be honest this is a minor complaint.

Rather more moan-worthy is the 32EX723’s audio. For while things sound absolutely fine with undemanding source material, like your typical TV programme, a well-produced drama or film soundtrack can end up sounding a little muddy and contained, with precious little going on in the bass department and too much packed into a mid-range that isn’t wide enough to cope.

As a 2D TV, the 32EX723 is a perfectly respectable mid-range effort. In fact, if its impressive, video-driven online capabilities are up your street, it’s perhaps a bit more than respectable.

If you are thinking about buying a 32EX723 for 3D, though, you’re barking up the wrong tree. Here’s hoping other new sets in Sony’s 2011 range prove more able with 3D, otherwise the brand could be in for a rather tough year.