While Sony’s Bravia Internet Video system currently has some significant problems that we’ll get to presently, one thing that’s not in doubt is that it really ‘gets’ what Smart TV functionality should be all about.

The clue is in the name: Bravia Internet Video (BIV). For what Sony has realised more powerfully than the rest is that the real key to developing a successful Smart TV system is to focus on video content. After all, playing back video is what your TV is designed to do. So Sony’s focus on getting mostly video streaming services live on its online servers seems to be the best idea the Japanese brand has had for years, frankly.

This focus gave BIV a huge edge in the 2010-early 2011 Smart TV season, and while its advantage isn’t as pronounced now, it’s still there thanks to a wealth of video content that includes LoveFilm, the BBC iPlayer, the Demand 5 Channel 5 catchup service, Sony’s own Qriocity platform, EuroSport, YouTube, a new 3D channel for TVs that support 3D playback, a Sky News headline feed, and perhaps best of all a free Sony Entertainment Television channel that’s stuffed with whole series of classic TV shows. 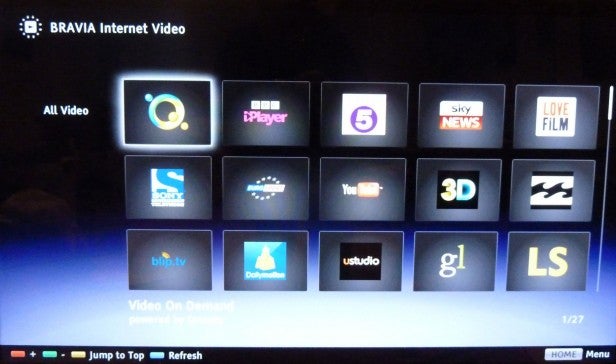 Clearly Sony’s ownership of some major TV and film content producing companies serves it well in ‘negotiating’ content for its BIV platform. It should be said that there appears to be actually fewer video platforms on BIV right now than there were last year, but this feels more like a deliberate trimming away of unnecessary ‘fat’ than Sony failing to keep the rights to show stuff.

More good news is that the BIV system seems impressively robust versus most of its rivals when it comes to the stability and quality of its video streams.

Sony’s clearly stated belief that video content is the biggest driver of Smart TV functionality carries with it an implicit belief that smaller, ‘smartphone’-like apps are not so important. And indeed, Sony doesn’t really bother with such ‘fluff’, currently adding only the Facebook, Twitter, Picasa and Skype social networking functions and a Web browser to its main video streaming talents.

This Web browser is a disappointment, though, featuring text that’s far too small to be comfortably readable from any sort of normal viewing distance.

Moreover. while we mostly concur with the videocentric direction Sony seems to want to take its Smart TV functionality, the brand needs to introduce a radical overhaul to its BIV interface. First, getting to some of the online options is like searching for a needle in a haystack, where the haystack is the horrible long-winded PS3-like menus that Sony currently uses on its TVs.

Second, even when you’re in the BIV content menus they’re not at all well organised. Yes, content is ordered by genre and presented via neat icons. But you sometimes have to scroll down over pages of stuff you’re not interested in to reach something you want rather than there being direct ‘links’ to different content genres. As well as making browsing tedious, the ‘scrolling down’ approach also makes it harder for you to spot new services as they come online.

While the sheer pain-factor of Sony’s current interface stops BIV realising its full potential, there is hope ahead as Sony is promising to launch new TVs driven by the much better looking Google TV platform by late spring. Watch this space.