Given Blu-ray’s ability to deliver immersive hi-res 7.1-channel soundtracks, you might question the sense of pairing a Blu-ray player with a 2.1-channel sound system, which is exactly what Sony has done with the BDV-FS350. The argument is, of course, that not everyone has the space, budget or desire to incorporate a 7.1 or even a 5.1-channel system into their home, and a three-channel system is a great way of upgrading from tinny TV speakers without encroaching on precious living room space.


The FS350 attempts to compensate for its depleted speaker count with the inclusion of S-Force PRO Front Surround wizardry, Sony’s method of delivering a surround sound experience without rear speakers, an area of audio technology that has garnered mixed results over the years.


Like the impressive HTP-B350IS system we reviewed recently, the BDV-FS350 isn’t your classic ‘all-in-one’ system – it bungs two separate products into one box, and the kit hand-picked to make up the BDV-FS350 package are the BDP-S350 Blu-ray player – a regular in Sony’s Blu-ray bundles which is also found with the HTP-B350IS – and the HT-FS1 front speakers/subwoofer combo. Bought individually you can find this pairing online for around £100 more, so you save money as well as enjoying the added convenience of getting everything you need in one hit.

The system works like this: the BDP-S350 connects to the HT-FS1’s subwoofer via HDMI, which extracts and decodes the digital audio soundtrack and passes the hi-def pictures on to your TV from its HDMI output. The audio processing and amplification is handled by the sub, and as a result you need to connect the front speakers into the back using the chunky colour-coded plugs.


These bookshelf-style speakers are finely crafted and look attractive without being showy. The gloss black finish surrounding the speaker mesh is eye-catching enough, and the cables are pre-attached to each one so you don’t have to faff around with fiddly springclips or binding posts.


The subwoofer meanwhile is admirably slim, measuring just 95mm wide and 215mm tall, which makes it far from imposing. It’s also surprisingly sturdy for a system sub and is finished in fetching shades of black, with ports on the front and side. Buttons are sparse, with just volume, input select and power buttons found on top, and there’s a simple display panel that shows the current input and houses the system’s setup menu.


The sub’s rear panel doesn’t just cater for the Blu-ray player – there are plenty of connections for your other kit too. Most significantly there are three 1080/24p-capable HDMI inputs, so you can channel the BDP-S350, a Sky+ HD and perhaps an upscaling DVD player through this system, although one more input wouldn’t have gone amiss for future expansion.


There are three optical digital inputs too, plus coaxial digital and analogue stereo ports for good measure. Completing the socket selection is the DM Port, into which you can plug an optional Bluetooth adapter and stream music to the system from MP3 players, laptops and mobile phones, or connect an iPod.

The audio capabilities of the sub unit aren’t bad, but there are limitations. For example, it only offers plain old Dolby Digital, DTS and Pro Logic II decoding instead of Dolby TrueHD and DTS HD Master Audio, which would have made more sense on a Blu-ray-centric system – after all, there are still sound quality benefits to be had through two speakers. But the good news is that it supports LPCM via HDMI, and because the BDP-S350 can output Dolby TrueHD as LPCM you can still enjoy the higher sound quality, although the player’s inability to decode DTS HD Master Audio means you’ll only get the 5.1 DTS core. If you upgrade to a more advanced receiver, rest assured that the player can output Dolby TrueHD and DTS HD Master Audio soundtracks in bitstream form.

Elsewhere the HT-FS1 features a 24-bit S-Master digital amplifier and a Sharc digital signal processor with a range of Sound Field modes, including Movie, Music, Sports and Game, as well as a Portable Audio Enhancer to boost digital audio playback.


As for the BDP-S350, it’s a highly attractive, slimline Profile 2.0 player (provided its firmware has been updated from the original Profile 1.1 spec), and it’s beautifully built for a so-called ‘budget’ player. It also spins DVDs, CDs and recordable Blu-ray discs, although it doesn’t support MP3 or DivX playback from any of them – only JPEG is supported.

It supports BonusView and BD Live, but for the latter there’s no built-in memory, so you’ll need to plug a USB memory drive into the back to store downloaded content. Also on the rear are an Ethernet port and an HDMI output that outputs 1080/24p pictures, as well as component, S-video, composite, optical/coaxial digital and analogue stereo audio outputs.


You won’t find many players with a better operating system, which makes the deck gratifyingly simple to use. It employs the dubiously-named but ingenious XrossMediaBar, which displays a horizontal row of icons interjected by the corresponding options. One of these is the setup menu, which presents all of the options in an understandable way, including the HDMI and secondary audio options, although there’s no specific setting that makes the deck output in LPCM. 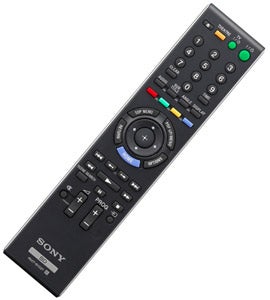 Although it’s not up there with LG and Samsung’s latest players, it’s fairly fast to load a disc. We clocked ”Spider-Man 3’s” first screen appearing at around 55 seconds, which is well within acceptable limits. In general the deck is slick and speedy at handling Blu-ray discs, surfing around pop-up menus, scanning through discs and skipping chapters without the annoying pauses that blight some of its rivals.


You get two remotes, one with the sound system and the S350, although you can control both using the HT-FS1’s remote which makes life a lot easier. It’s generally well laid out with decent labelling of the most-used buttons but it feels overburdened with icons in places.

Starting with the system’s sound performance, we gave it a run out with the ”Iron Man” Blu-ray disc and although we can’t pretend that the two channels do justice to its scintillating Dolby TrueHD soundtrack, you can certainly hear the high calibre of the speakers. With loud, busy action scenes like Stark’s escape from the cave in the prototype Iron Man suit, they take the steady stream of snapping gunfire and bullets pinging off the metal bodywork in their stride, with the competent treble handling never making these effects sound overly hard or brash.


The climactic smackdown between Tony and Obadiah is also full of energy, with forthright dialogue, dynamic effects and a wide soundstage courtesy of S-Force, although inevitably it can’t replicate the true sense of surround placement that you get from a proper 5.1-channel system. 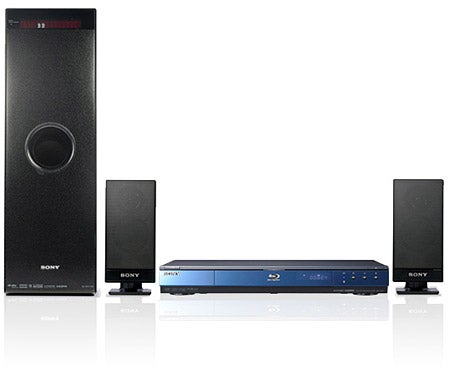 But if we have one gripe about the system’s sound performance, it’s that there’s simply not enough welly behind it. Power is rated at 40W for the speakers with 100W for the sub, but ”Iron Man’s” pulsating action scenes fall flat in the power stakes – big explosions, such as the one that blows up the Humvee at the beginning or the Jericho missile demo, make a minimal impact even when cranked up to near maximum volume, and the sub lacks the potency needed to fill the room and get your pulse racing.


Despite this, the system does a decent job at playing back music. Amy Winehouse’s ”Frank” on CD is conveyed with a richness, delicacy and cohesion absent from most one-box 2.1 systems, and the bass deficiency isn’t so telling with music material.


Blu-ray pictures look fantastic, with bucketloads of detail, vibrant colours and convincing skin tones, with the dusty desert detail of ”Iron Man’s” opening shots looking razor-sharp. Motion is smoothly tracked and edges are sharper than a bag of lemons. Although its performance with the HQV Benchmark disc isn’t flawless, its suppression of jaggies is very impressive.


If you like Blu-ray movies delivered with plenty of power then give the BDV-FS350 a miss – the weak sub and overall lack of potency might leave you feeling a tad underwhelmed when watching action-packed Blu-ray discs. The sub’s lack of HD audio decoding is also a shame, as is the absence of Master Audio support.


But these issues aside, the speakers display impressive finesse with the other sonic elements and music playback is a treat. What’s more the inclusion of the stylish BDP-S350 Blu-ray player means you get top-drawer hi-def pictures and a decent array of features to boot. Overall this is a decent option if you’re strapped for space, but we suggest taking it for a test drive before parting with your cash.