All-in-one packages represent the quickest and most convenient way of buying a home cinema system, bringing you a Blu-ray player, surround sound amplifier and multichannel speakers in one box. Although they can’t match separates for sound quality, they’re usually packed full of features and therefore offer you the best-possible value for money. And at first glance that looks to be the case with the Sony BDV-E880. 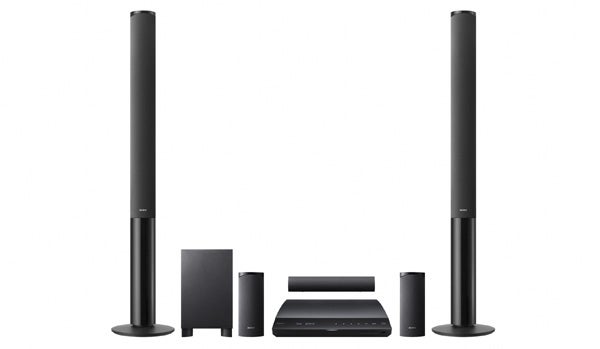 It’s a 5.1-channel system with a built-in 3D-ready Blu-ray player, a claimed 1000W of audio power and all the network streaming functionality we’ve come to expect from Sony’s home cinema products. At £450 it’s exactly the same price as Harman Kardon charges for a standalone set of speakers (the HKTS 20BQ/230), which gives you some indication as to how much Sony has crammed in for the money.

The accompanying speaker system is made up of two 1.2m-high floorstanding towers for the front channels, a pair of slender bookshelf satellites for the rear and one of the slimmest centre speakers we’ve encountered. On bass duties is a passive subwoofer, which our first fondle reveals to be a little heavier and sturdier than the majority of one-box subs we’ve tested, which is a good start.

The Blu-ray receiver unit is a slim, slinky piece of kit, blessed with a forward curving front section that houses the display panel and a row of touch-sensitive controls. It looks great but the upward-facing LED display is impossible to see from the sofa, which means you’re at the mercy of the onscreen displays for title/chapter/time info. It’s also remarkably deep at 320mm, but those things aside it’s absolutely gorgeous and is enhanced by a brushed black top panel and a white light on the front. Build quality is also unusually solid, getting the system off to a very good start indeed.

A USB port is found on the bottom right hand side, and on the rear panel, connections are generous, with two HDMI v1.4 inputs to channel your other hi-def kit and one ARC-compatible output. There are also two digital audio inputs (one optical, one coaxial), analogue stereo input and composite video output. An Ethernet port, second USB port, FM aerial input and socket for the auto calibration mic complete the line-up.

The front speakers look delightful from a distance – two tall gloss-black columns that’ll loom over your living room in style, with a rounded shape that’s designed to offer a wider listening area. They come in two parts that need slotting together and they screw into sturdy circular bases. Up close they’re also reasonably well-made but there is a plasticky feel to some of the parts that just reminds you of its budget origins.

The same can be said for the gloss-black rears, which have an unusual backward-sloping design, making it look like they’re poised to chuck sound up and into your room, but they’re also light, hollow and a little unstable when perched on a tabletop – it doesn’t take much of a jolt to knock one over.

The subwoofer is much better. It’s a squat cuboid shape, with four short legs giving the downward-firing driver and port underneath a bit of airspace. It’s a helpfully compact size and the neutral styling helps it blend discreetly into the room.

While its main job is to spin discs (including 3D Blu-ray, of course), the BDV-E880 is more of an all-round entertainment hub than a straight-up home cinema system, putting a wide variety of other media playback options at your disposal.

The most eye catching of its media talents is access to BRAVIA Internet Video, Sony’s online content portal, which for our money offers the best choice of content on the market. That choice includes BBC iPlayer, Demand 5, Sky News, LoveFilm, Sony Entertainment TV, Eurosport, YouTube, Qriocity and loads of other video sites, plus a cluster of music and radio services. 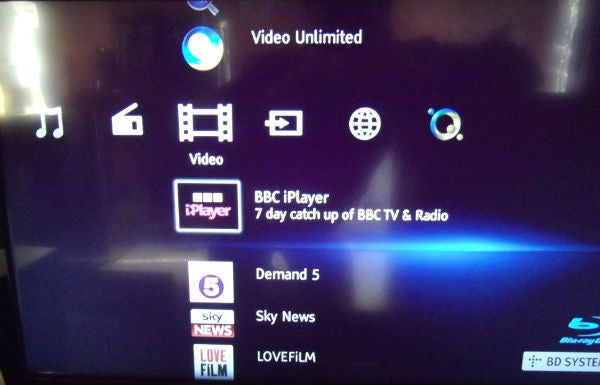 But if you’d rather enjoy your own music or video library, you can also stream it directly from PCs and other DLNA devices on your network. And when hooked up to your network you can also control the BDV-E880 with an iPhone or Android phone, or use its keyboard to type onscreen text – essential if using the system’s built-in internet browser, as it’s a real chore entering URLs with the remote.

If you want to access any of these features wirelessly then you’ll need to invest in Sony’s optional Wi-Fi adapter, which you can find online for around £70. This connects to one of the USB ports, and because there are two it leaves the other one free to play music, video and photos from another thumb drive or external HDD. Our tests were carried out using an Ethernet connection.

Format support is reasonably healthy, with the Sony offering support for MKV, XviD, WMV, AVI, MP3, WMA, AAC, WAV, LPCM and JPEG, but as we found with Sony’s standalone players it won’t recognise DivX files, which could be a major bummer if you’ve amassed a large collection of movies.

On the audio front, there’s a range of DSP modes to play around with. These include Sony’s 3D Surround mode, which is supposed to add extra depth to the sound and help you get immersed deeper in 3D movies. It’s joined by Movie, Music, Sports, Game-Rock, Omni-Directional, Hall, Night and an Auto mode.

The system also decodes Dolby True HD, Dolby Digital Plus and DTS HD Master Audio, plus it’ll play any SACDs you happen to have in your collection, all in glorious hi-res multichannel quality.

Setup and operation is a cinch. The speaker cables connect to colour-coded terminals on the back, and once up and running you don’t need to worry about fine-tuning the speaker performance as there’s an automatic calibration mode that does it all for you – although you can adjust the distances and levels yourself within the setup menu.

The onscreen Home menu uses the same Xross Media Bar we’ve been surfing for years, and thankfully familiarity isn’t yet breeding contempt. Here it’s as slick as ever, with all the options represented by stylised icons, laid out along two intersecting axes. It’s intuitive in the extreme, but the growing amount of content – particularly video sites – means the vertical lists are quite long and laborious to scroll down.

The Home Menu also houses the setup menu, which again poses few obstacles, plus if you’re hooked up to the web the Sony searches its Gracenote database and shows title and cover art for the loaded disc. Input selection can be carried out using the Home menu Input list, or toggling through them with the remote’s Function button.

Hit the Options button during movie playback and a menu slides in from the right-hand-side showing often-used functions – including a Video Settings menu, which lets you add noise reduction and select from a few picture presets.

The remote is nicely sized, ergonomic and thoughtfully laid out, particularly the crucial menu control and playback buttons. It’s a little too busy and some of the keys are tiny, but on the whole we got on with it like a house on fire.

The BDV-E880’s performance is OK by all-in-one system standards, and if you’re a newcomer to the home cinema game or you’re upgrading from a TV, the initial jump-up in quality is likely to keep you enthralled for some time. But it lacks the clarity, subtlety and separation of a separates system.

But let’s start with the good stuff. The Sony is a powerful, boisterous performer, instantly communicating a sense of excitement with its loud output and feisty effects handling. We loaded up Transformers: Dark of the Moon on Blu-ray and the Dolby True HD track is a riot, particularly the ending which sees loads of robots going hell for leather on the city streets.

Machine gun fire is fast and punchy, explosions and robot footsteps are all-encompassing and the sound is homogenous across the front, centre and rear speakers. Dialogue is audible too, although we’re not sure that’s a good thing given some of this movie’s shockingly wooden acting. It lends richness to the robotic voices too. 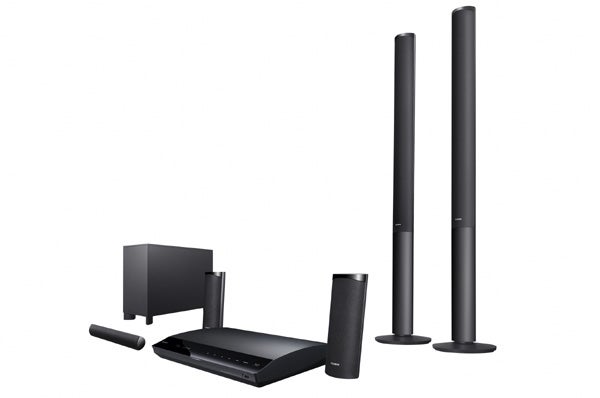 But see past all the gusto and you’ll discover the BDV-E880’s sound is actually quite messy. High frequencies are ripe and harsh, especially when metal hits metal, which means it all gets a bit fatiguing after a while.

There’s no real subtlety or variation in the sub’s bass output either, it’s more of a constant, overpowering rumble that goes up and down in intensity. Its boomy output means you’re too aware of its presence, when it should be more subtle and seamless.

Oddly, we were  much more impressed by the BDV-E880 with music. Amy Winehouse’s Lioness CD has pleasingly warm and chunky sound, with the subwoofer’s bass seeming better integrated. It gets even better with SACD, with its higher resolution making it sound detailed and expansive.

It is, however, a brilliant video performer. Transformers’ 1080p CG-heavy visuals are stunningly crisp, colours blaze from the screen and the fast-moving action is handled with pleasing fluidity on our 24p screen. 3D pictures look equally dazzling, nailing the immersion, depth and clarity we’ve come to expect from 3D pictures.

And we can’t fault its network performance either. BRAVIA Internet Video works beautifully, streaming the HD version of EastEnders from BBC iPlayer without any major hitches, and the picture quality is crisp thanks to the on-board web video enhancer, although it’s still a little gauzy.

Verdict
The BDV-E880’s story is a familiar one – an all-in-one system from a big name brand that looks great and packs in loads of cutting-edge features but offers flawed sound quality, no doubt brought about by the inevitable cost comprises.

It’s loud and dynamic, but the uneasy highs and boomy bass make it pale in comparison to even the simplest of separates systems. It’s also a shame there’s no Wi-Fi on board.

But when you consider that you’re getting a full home cinema system for £450 that boasts 3D support, a wealth of online entertainment, USB playback and other goodies to boot, you might just be willing to tolerate a few sonic shortcomings.