Buying an all-in-one Blu-ray system is often the easiest and the cheapest way to upgrade your disc player and sound system at the same time. Build and sound quality aren’t always as impressive as carefully matched separates, but for some people the added convenience is worth the compromise.


There are, however, certain manufacturers who invest a little more time and effort in the performance of their all-in-one systems, giving you a better price-to-sound quality ratio – Pioneer and Sony are two that spring to mind.


Which brings us neatly to the BDV-E300, one of Sony’s current Blu-ray-in-a-box solutions. Although it’s due to be replaced in the spring when Sony launches its first batch of 3D-capable systems (albeit with a firmware upgrade), the BDV-E300 still boasts all the Blu-ray essentials, and because it’s not brand new you should be able to find it for a decent price online.

The BDV-E300 is a straightforward proposition. The main unit is a combined Blu-ray/DVD player and 5.1-channel amplifier, offering 1,000W of power, and it’s joined in the box by front and rear speakers, a thin centre speaker and a passive subwoofer.


The main unit is unashamedly thick and chunky like the home cinema systems of yesteryear, and although Sony hasn’t exactly pushed the boat out the black finish makes it easy on the eye. But more importantly, build quality is excellent.


The LED display panel is large and prominent, while the gloss-black panel above the fascia plays host to a row of buttons (sadly not touch-sensitive). There’s no USB port on the front, which is a real shame if you’ve got a wealth of digital music, videos and photos that you want to enjoy in the living room. Instead, Sony cunningly ties you into the proprietary Digital Media Port on the back. A variety of adapters are available as optional extras, including devices for Bluetooth and wireless network audio, but thankfully you get the TDM-iP20 iPod dock in the box.

The back panel is a busy place. The large covered slot you see toward the top right corner is for an EZW-100 wireless transmitter, which is part of Sony’s S-Air system. It enables wireless audio transmission between compatible products, and in this case it means you can zap an extra pair of surround channels to an amplifier at the back of the room, giving you a full 7.1-channel system. This wireless upgrade kit (WAHT-SA1) is optional, and we found it online for around £150.


The BDV-E300 supports BD-Live, but because the required memory isn’t built-in there’s a USB port for adding a flash drive, which can’t be used for digital media playback. You also get HDMI, component and composite outputs, optical and coaxial digital audio inputs and two pairs of analogue stereo inputs.


This selection is perfectly serviceable, but we’d have liked some HDMI inputs for people who want to switch between their various hi-def sources. Being a budget system, the lack of Wi-Fi comes as no surprise but does mean you’ll need to hook up the system up to your router using the less convenient Ethernet port.

Turning our attention to the speakers, the front and rear satellites look identical but there are some minor differences – the fronts use a two-driver array, with a 20mm tweeter and 65mm woofer, while the rears sport a single full-range driver. All four stand 225mm tall, sport an unremarkable but inoffensive design and can be wall-mounted if you wish.


The centre is long and thin, making placement easy in your AV rack. The sub meanwhile has all the hallmarks of a one-box woofer, with light, hollow bodywork and nothing but a set of springclips on the back, but at least the gloss-black finish and curvy port make the front look presentable.


Glancing down the spec sheet, there’s a few other features worth mentioning in passing – Dolby TrueHD and DTS HD Master Audio decoding, Dolby Pro Logic II, a trio of noise reduction modes (mosquito, block and random), picture presets for light and dark rooms, JPEG playback from Blu-ray, DVD and CD, a range of sound modes and an FM radio tuner. 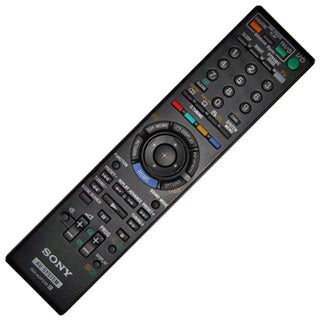 Unusually for an all-in-one system, the BDV-E300 comes with an automatic calibration mode, which makes it much easier to optimise than most systems at this price. Simply plug the supplied mic into the port on the back and select the relevant mode in the setup menu – it runs through the process in seconds and shows you the results at the end. You can set all the speaker distances and levels manually but there’s really no need, as its results are right on the money.


The operating system is virtually the same as Sony’s standalone players, give or take a few system-specific settings, which means the menu design is gorgeous. Once again Sony deploys the Xross Media Bar to organise the various functions into intersecting axes, and it’s bursting with simple icons, vibrant colours and clear text. We also love the way it skates smoothly from option to option. Everything is a breeze to configure, from AV options through to the trickier network settings, and that’s an important attribute for a system aimed at Blu-ray beginners.


The remote is a little too congested above and below the central ring of menu controls, but once you’ve orientated yourself it’s actually more intuitive to use than it first looks. The biggest flaw is that the volume buttons are far too low down to reach comfortably.

To test how well the BDV-E300 performs, we grabbed the trusty ”Hellboy II: The Golden Army” Blu-ray off the shelf. After 45 seconds the disc started playing, which is a lot quicker than the 92 seconds it took to crank ”Terminator Salvation” into life, but still a fairly long time to wait.


Once it gets going, the Sony delivers a marvellous performance with the movie’s DTS HD MA soundtrack. Flip to our favourite scene – the Elemental attack in chapter 11 – and the scale of the soundstage is immense. It blasts out the action with more attack and distortion-free dynamism than most similarly priced rivals we’ve auditioned, which makes it a thrilling system to spend time with.


The sound of the beast’s tentacles crashing down on cars is wall-shakingly fierce, while its screams are loud and powerful but not grating. There’s also detail by the bucket load. The chirpy chatter of the movie’s odd little creatures and other high-frequency sounds during the Troll Market scene ring out loud and true across the soundstage.

The rear channels project themselves well, creating an almost 360-degree soundstage, but their range isn’t limited to high-pitched effects. They also handle mid and low frequencies with surprising aplomb, which gives the rear soundstage unusual depth. During calmer passages they lay out a rich bed of sound that intensifies the atmosphere.


There isn’t really much to criticise. The only thing we’d say is that you can get even more detail, punch and refinement from a good separate speaker system made by the likes of KEF, Teufel or Monitor Audio – but to achieve that you’d be spending over £500 on speakers alone, which kind of defeats the object. By one-box system standards this is almost as good as it gets.


The great work continues on the video front – the BDV-E300’s picture is beautifully detailed, punchy and lustrous, the same sort of quality you get from standalone Sony players like the BDP-S760. Similarly, DVD quality is hugely satisfying. The system converts the image to 1080p without compromising on depth, detail or colour fidelity, as well as keeping video nasties like jaggies and block noise at bay.


With limited digital media support – including an inexplicable inability to play MP3, WMA and DivX from discs and USB sticks – the BDV-E300 isn’t the kind of all-singing, all-dancing system you’d get from LG or Samsung. What’s more, the lack of Wi-Fi (as found on Sony’s latest players) further underlines the system’s outdated feel.


But the Sony makes up for this with the kind of performance you don’t normally associate with one-box systems. It’s powerful, sonically insightful and side-steps the harshness we’ve heard from some of its rivals, which might just be enough to win your favour despite the gaping omissions on the feature list. And it earns further Brownie points with the inclusion of auto calibration and a superb operating system, which Blu-ray newcomers will be really grateful for.