Sony’s standalone Blu-ray players have long been seen as a poor relation of the PS3, but the BDP-S760 could be the deck to change that perception. OK so you can’t play games on it, but it’s the most feature-packed Sony deck to date and most significantly the first from the company to boast built-in Wi-Fi. That makes it a direct rival to the tremendous LG BD390, which is still our Blu-ray benchmark, but at around £50 dearer Sony’s challenger has its work cut out knocking the Korean king off its throne. Let’s see how it fares.

First, let’s discuss design. The BDP-S760 is a much chunkier player than the BDP-S360, presumably to accommodate the extra electronics for all those flash new features. But despite its extra girth it’s a beautifully styled player, jazzed up by a slim blue light on the front and an alluring silver top cover. The front display panel is a little too small to read comfortably from a typical viewing distance, but it does contain a helpful selection of info – including a little ‘WLAN’ light that confirms Wi-Fi is enabled. Naturally our eye is also drawn to the USB port on the right hand side, which allows you to view JPEG photos on your TV, but weirdly not MP3 or DivX. All in all this is an attractive and beautifully constructed machine.


Spin it 180 degrees and you’re faced with a thorough line-up of sockets. Of course the HDMI output takes pride of place, leaving component, S-video and composite to provide able analogue back up. On the audio side you get 7.1-channel analogue outputs and a choice of optical and digital audio outputs, any of which can be used if your AV receiver hasn’t quite caught up with the whole HDMI revolution.

Joining these is an Ethernet port that brings BD Live to life in households without wireless routers, plus a second USB port designed to house the 1GB of memory for storing web downloads. Unlike the BD390, this memory isn’t built in, so forking out for a USB memory stick is a necessary evil. Completing the line-up is analogue stereo output.


With its Wi-Fi support, the DLNA-certified BDP-S760 offers network functionality, including the ability to grab content from connected PCs. The deck supports the latest Wi-Fi standard, 802.11n, as well as a/b/g, which should ensure a fast reliable connection with compatible routers, but here’s where LG scores its first victory – the Sony only allows you to view photos and not video or audio, which is a completely wasted opportunity.


Oddly, the deck can find and display your music and video folders but won’t recognise the files within them. Compare this with the BD390’s wealth of supported formats and Sony is left with egg on its face. It’s also worth mentioning that the BD390 also throws YouTube access into the mix, which is also absent here. The only positive we can take is that Sony’s PhotoTV HD feature at least lets you view JPEGs in hi-def.

However, the web connection does provide full access to BD Live. We gave it the once over (using our 802.11g wireless router) and although everything worked fine, we weren’t bowled over by the experience. With ”Terminator Salvation” in the tray, we selected the BD Live icon in the main menu and had to wait for about four minutes for the Sony Pictures BD Live screen to appear. Once there, we downloaded an HD trailer for ”Michael Jackson: This Is It” and streamed a few SD clips, none of which took a particularly long time to load but the content could hardly be described as compelling. Much better is Movie IQ, a slick widget that provides trivia about the movie as it plays.


We’re also impressed by how easy it is to set the player up on a network. Dip into the Network Settings menu and the deck runs through a step-by-step wizard that describes each stage of the process in clear, understandable English – about a million times more user-friendly than any of Samsung’s Wi-Fi-enabled decks. One of the setup screens involves entering your encryption key using the remote and an unusual virtual keyboard, or you can press the WPS (Wi-Fi Protected Setup) button on your router, if it has one.

As for other features, the player is equipped with proprietary picture technologies found on the company’s BDP-S5000ES player, such as HD Reality Enhancer, which lets you boost detail, smooth out colour gradations and reduce grain, and Advanced Super Bit Mapping, which selects the appropriate colour bit depth.


Audio features include internal decoding of Dolby TrueHD and DTS HD Master Audio, available as PCM from the HDMI output or through the 7.1-channel analogue outputs. The deck can also pipe raw HD audio bitstreams to a compatible AV receiver, while Headphone Surround offers 7.1-channel sound through headphones, explaining the unusual sight of a headphone jack on the front panel.


Another feature worth mentioning is the Precision Drive HD, which not only spins Blu-ray, DVDs and CDs without fuss, but will also tackle your bent and scratched platters. The Quick Start mode kick starts the player into life from standby in just six seconds, which should satisfy more impatient movie viewers. It’s just a shame that Sony couldn’t speed up disc loading times too – it took a staggering 73 seconds to start playing ”Terminator Salvation”, which is a poor show from the company that invented the format, particularly with one of its own discs!


But that’s the only aspect of the deck’s operation that gives us cause for complaint – in every other way it’s an absolute star. Once again much praise must go to the Xross Media Bar, which is still the slickest and most intelligent Blu-ray menu system there is – just ask any PS3 owner. The intersecting axes, snazzy icons, smooth animation and clear text make configuration a doddle and the Setup section leaves no stone unturned.

The onscreen display is also very useful, showing you the video format, frame rate, audio soundtrack and running time info. Sadly, hitting the main menu button stops playback and makes you lose your place in the film if there’s no resume mode.


The remote is impressive. The pivotal menu direction controls are placed exactly where your thumb assumes they’ll be, and the important buttons (Home, Pop-Up Menu, Top Menu, Return) are helpfully circled round them. Elsewhere, everything is clearly labelled and uncluttered but the icing on the cake is the backlight, which illuminates the playback and menu controls for easy navigation in the dark. 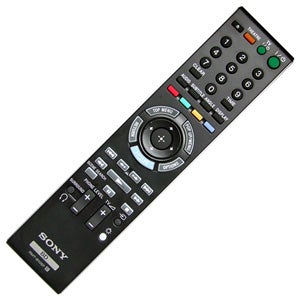 A run-through of ”Inglourious Basterds” on Blu-ray reveals the Sony to be a fantastic picture performer. Detail retrieval is as good as we’ve seen from any Blu-ray player, making the sets, costumes and facial close-ups look devilishly real and three-dimensional. There’s an unmistakable depth and solidity to the picture that cinephiles will relish, while the colour palette is faithful and nuanced.


With 1080/24p output engaged we could discern no judder problems with sudden fast movements and camera pans, and the Sony also gets a clean bill of health with DVDs and all of the tests on the Silicon Optix HQV disc. All in all the Sony’s picture performance is every bit as impressive as the LG BD390 and other top-class players from the likes of Pioneer, Panasonic and Denon.

And on the audio side, the BDP-S760 is equally competent, delivering HD audio soundtracks through its multichannel analogue outputs with sparkling detail and breathtaking dynamism. It orchestrates the chaos of Inglourious Basterds’ cinema fire climax with effortless control, injecting the soundstage with loads of tight bass and crisp surround effects. Switch over to the analogue stereo outs and CDs sound punchy and absorbing, making this a viable replacement for that ageing CD deck hogging space in your system.


The BDP-S760 is by far the most impressive Sony Blu-ray player we’ve encountered. Its picture and sound performance is up there with the best of them, the operating system is a dream to use and the feature list is a vast improvement on previous Sony players, with built-in Wi-Fi being the obvious highlight.


But is it good enough to topple the LG B390? Not quite. The LG’s feature list is vastly superior, allowing you to stream a wider array of movie and music formats over your network and not just JPEGs, plus it throws in YouTube access for good measure. What’s more the Sony is slower to load discs, lacks built in BD Live memory, only plays JPEG from USB sticks and to top it all off it’s more expensive. Looks like Sony will have to settle for second best…