The BDP-S6200 is Sony’s best-but-one Blu-ray player, positioned just below the flagship BDP-S7200. The beauty of the BDP-S6200 is that offers most of the same features as the top-end model but for about £50 less – the only major difference is that the S7200 adds SACD and hi-res audio playback, which you might not be bothered about anyway.

Even without them the BDP-S6200 is loaded with features, including a wealth of web content, DLNA file streaming and 4K upscaling. We awarded the brilliant BDP-S5200 a well-deserved 9/10 and if that deck’s anything to go by then we could have another winner on our hands.

Like all of Sony’s 2014 players except the BDP-S7200, the BDP-S6200 sports the distinctive ‘Sense of Quartz’ design introduced on Sony’s BRAVIA TVs, with sloping top panels that look a bit like a crystal. The mirrored panel at the front injects a touch of glamour, but the rest is dressed in a contemporary gloss-black finish. 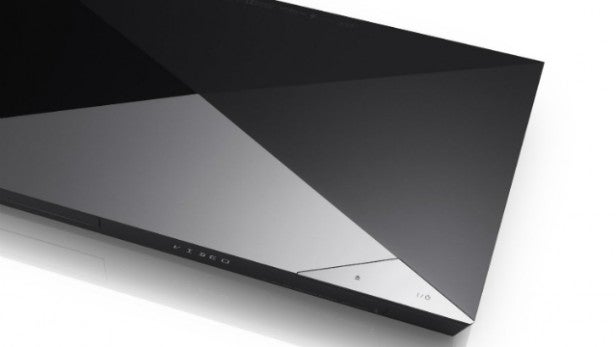 It’s a stylish approach, lifting it above the visual mediocrity of most Blu-ray decks, although it’s impossible to put any other components on top if you’re so inclined. Build quality is decent enough but the bodywork is a bit plasticky.

The other notable aspect of the Sony’s design is its size – at 360mm it’s narrower than most Blu-ray decks, which makes it a prime candidate for use in a second room where space might be tight. 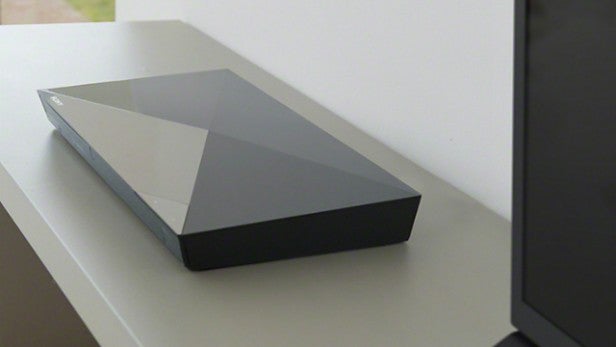 The inward-sloping front panel features a small but legible LED display, a disc tray and a USB port hidden behind a plastic flap. Triangular power and eject buttons are neatly incorporated into the top panel.

Given the price and positioning we expected a few more sockets. In fact the only thing that separates it from the cheaper BDP-S1200, 4200 and 5200 is a second USB port, which is useful if you want to keep a USB media device connected without it sticking out the front.

Granted, the HDMI and coaxial digital audio outputs should suffice for most people, plus there’s an Ethernet port for those who prefer a wired internet connection to the built-in Wi-Fi. But we’d expect more – at the very least an optical output, which is the input of choice for most soundbars and audio systems these days.

The feature list is crammed with cutting-edge tech. So whether you want to upscale Blu-ray discs to 4K on your shiny new 4K TV, gawp at 3D movies, stream internet content or beam your smartphone’s screen to your TV, the BDP-S6200 has it covered.

One of the main reasons people snap up Blu-ray decks (aside from watching Blu-ray movies) is to take advantage of built-in internet apps, and on that score Sony has long been one of the best in the business.

Lately, Samsung and to a lesser extent LG have taken the shine off Sony’s selection with their exclusive inclusion of apps like ITV Player/4OD (Samsung) and Now TV/Spotify (LG). But Sony still holds its own with a line-up that includes Amazon Instant Video, Netflix, BBC iPlayer, Demand 5, BBC News, BBC Sport, Sky News, YouTube and tons of lesser-known but equally welcome apps. These can all be found in the Home menu, as well as the dedicated Sony Entertainment Network (SEN) interface. 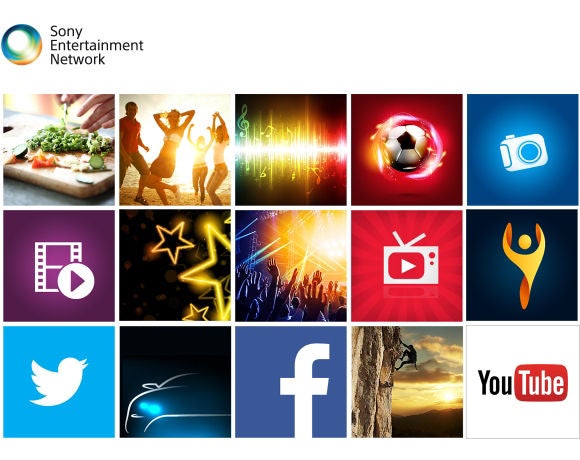 You can also access Sony’s Video and Music Unlimited services, browse the web at large and listen to internet radio through the vTuner portal. There’s loads more content in the Opera TV Store portal too. If you love whiling away the hours on games, puzzles and trivia, you’ll be in seventh heaven.

Elsewhere the BDP-S6200 will stream content from PCs, smartphones and any DLNA-compatible device on your home network. On the video side we were able to stream AVCHD, WMV, MP4, AVI but sadly not DivX or MKV (the latter can be played from USB devices). Supported music files include MP3, FLAC, ALAC, AAC, WAV and WMA (again, FLAC and ALAC are USB only) plus you can view JPEG, PNG, GIF and MPO photos in a slideshow.

The BDP-S6200 also boasts Super Wi-Fi, which uses a ‘super sensitive antenna’ to ensure a smooth, stable connection even with a weak signal. We tried connecting to a Wi-Fi router in the house from a garden office, and unlike many players we’ve tested it locked on and streamed HD video from iPlayer (through the howling wind and rain, may we add).

We’ve long admired Sony’s Xross Media Bar interface, which uses two intersecting axes to display the menu options. It’s starting to look a little dated but works as well as ever, allowing you to navigate quickly and smoothly. The graphics, text and backgrounds are clean and uncluttered, plus the intuitive layout helps you find content easily. 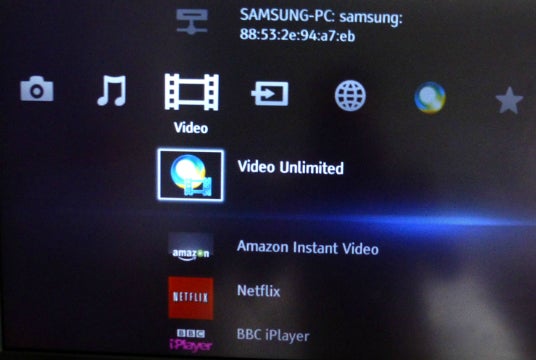 Highlight ‘Video’ for instance and it lists all available web apps, USB devices, DLNA servers and loaded discs in the vertical axis. The thorough setup menu is split into sensible categories.

When navigating folders on a DLNA server, the menus follow the same cross-axis structure until you get to the file you want, where it switches to a fullscreen display with cover art and metadata. We’re big fans of the funky SEN menu, which makes great use of icons and cover art.

It’s a well-oiled machine, helped along by a dual core processor that ensures fast navigation and quick boot-up times. Operation is slick and instant, with no annoying delays.

Sony’s TV Side View app allows you to control the deck with your iOS or Android device and it’s well worth using – the menus looks cool and work beautifully.

But if you opt for the old-school zapper, fear not – it’s terrific. The compact handset differs from last year’s model, sporting a stripped-down layout with large rubbery keys and unmissable labelling. Key to its success is the perfectly-placed direction pad and the prominent Home, SEN and Netflix buttons.

The BDP-S6200 continues the stellar work of the S5200 with equally eye-popping hi-def pictures. Load up a challenging Blu-ray disc like Lincoln and the Sony renders Spielberg’s gorgeous period visuals with panache.

The picture is bursting with detail, from strands of straggly beard hair to the black textures of the president’s iconic stovepipe hat. The muted colour tones throughout the movie look subtle and realistic, including pasty skin tones and brown mud-strewn battlefields. Dingy interiors are rendered with punch and precision, never losing sight of detail lurking in the background. Every scene looks deep and effortlessly filmic.

Switch to something bolder and brighter like Captain America: The Winter Soldier and there’s no dip in the deck’s visual integrity. Shots of Washington are like a picture postcard, while comic-book costumes and blue skies blaze from the screen. And when the action gets more frenetic, objects fizz around the screen with no evidence of judder.

It’s much the same when you switch to a 3D disc like The Hobbit – the Middle Earth vistas look crisp and natural, movement is blur-free and there’s a wonderful sense of depth and space as the camera gazes across New Zealand’s verdant hills and mountains. 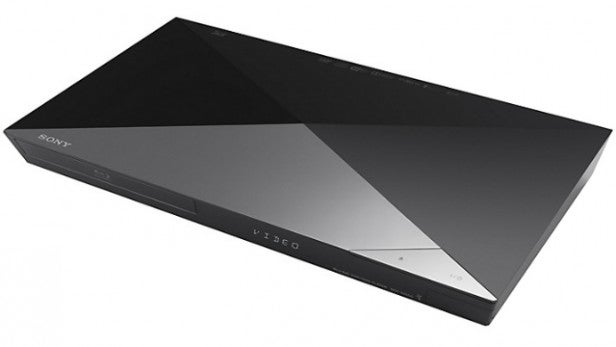 The BDP-S6200 is a fantastic Blu-ray player – stylish, packed with features, easy to use and fast in operation. Picture quality is superb and there’s enough online content to keep you entertained for years. Like LG’s BP740 it’s a little expensive, but provides virtually the same spec as the Korean deck for about £30 less.

Negatives are minor – a few more sockets wouldn’t go amiss and other players like the Samsung BD-H6500 provide better internet content. Also, if you don’t need 4K upscaling or the second USB port, then there’s really no point in going for the BDP-S6200 – save yourself cash and opt for the BDP-S5200 instead.

Sony unleashes another impressive 3D Blu-ray player with a chic design, slick operating system and dazzling pictures – not to mention an enviable set of features