In recent years Sony’s Blu-ray players have consistently been among best on the market thanks to their excellent online content, generous features and solid AV performance. Sony is looking to continue its fine hi-def heritage with the BDP-S490, the midrange model in its 2012 line-up. It’s aimed at those looking for a something more sophisticated than the entry-level BDP-S185 and step-up BDP-S390 (neither of which are 3D-ready), but not quite as flash as the range-topping BDP-S790 and BDP-S590.

As the cheapest model in the range to feature 3D, it’ll attract attention from those who want an affordable movie source for their 3D TV – in fact you can buy it in a bundle with Sony’s KDL-40HX853 TV for £1,199 on the company’s website.

The BDP-S490 is a remarkably good looking player, a refreshing break from the Blu-ray norm. The sides curve underneath the flat top panel, making it wider on top than it is on the bottom. There’s a fetching brushed finish on top, with gloss black plastic around the sides. Build quality isn’t exactly heavyweight but rigid enough to ward off any performance concerns.

The sleek front panel features an LED display panel that’s just about large enough to read from the sofa, a disc tray and a USB port hidden behind a flap. The buttons are concealed in a slim silver strip running along the top.

On the back is an unusually generous line-up of sockets. They include an HDMI v1.4 output, composite video and analogue stereo outputs, alongside both optical and coaxial digital audio outputs – you normally get one or the other at this price. There’s also an Ethernet port that allows you to connect the deck to your home network, and another USB port to connect the optional USB Wi-Fi adapter.

The BDP-S490’s feature list is terrific, but attention will inevitably be drawn to the lack of built-in Wi-Fi – which, coincidentally, you can find inside some similarly-priced rivals like the Samsung BD-E6100. That means you have to buy Sony’s UWA-BR100 USB LAN adapter to access the deck’s network functionality wirelessly, which adds an extra £50 or so to the overall price. You can of course use the Ethernet port, but it’s far less convenient – unless your router is near your TV or you use a Homeplug system.

Still it’s worth the effort, because Sony’s range of online content is possibly the best in the business. The Sony Entertainment Network features plenty of free video streaming services, including catch-up TV from BBC iPlayer and Demand 5, plus Sky News, YouTube, DailyMotion, Sony’s 3D Experience and Sony Entertainment Television. On-demand movies are supplied by Netflix and LoveFilm, plus there’s a wealth of specialist sites to choose from.

And that’s just the ‘Video’ section. In the Music section you’ll find Music Unlimited, Moshcam, National Public Radio and vTuner internet radio, while the Network section is home to Facebook, the Opera TV Store and an internet browser. If we’re being picky, the lack of ITV Player and 4OD is a shame but otherwise SEN boasts an enviable selection.

The DLNA-certified player can also be used to stream video, music and photos from your own media servers (PCs, laptops, NAS drives etc) or you can play files from devices and hard drives connected to either of the USB ports. The list of supported formats is wide-ranging, although we’re still a little miffed by the lack of DivX support and it only played our WMV HD file in weird, blurry SD resolution.

Still, it’ll play MKV, AVCHD, MP4, AVI, XviD and MPEG-1. We were also hugely surprised that the deck played some seriously old WMV rips that most Blu-ray decks refuse to play. Supported photo formats are JPEG, GIF and PNG. On the music side, it’ll play MP3, WAV, WMA and AAC, but the lack of FLAC is disappointing. The deck makes up for it with support for Super Audio CD, which audiophiles will welcome with open ears.

Not only is the BDP-S490 able to play 3D Blu-ray discs, but it’ll also convert 2D movies to 3D, widening your potential range of 3D content. The deck features Super Scaler (Precision CinemaHD) upscaling to display DVDs on HD resolution screens, while on the audio side it handles Dolby True HD and DTS HD Master Audio, converting them into PCM or outputting them as a raw bitstream for your AV receiver to decode.

You’ll also find some other handy network-enabled features, such as the Qriocity Entertainment Database (courtesy of Gracenote), which provides cover art and other details about the disc being played. The deck can also be controlled using an Android or iOS smartphone or tablet running the Media Remote App, including control over playback of content from media servers. If you’re browsing the web on your smartphone, you can even ‘throw’ pages to your TV screen.

For the Sony BDP-S490 Sony has kept faith with the Xross Media Bar layout for its main menu system, which operates smoothly enough but st starting to show its limitations. The menu uses two rows of intersecting icons, the horizontal row showing the categories with the corresponding options in the vertical axis. 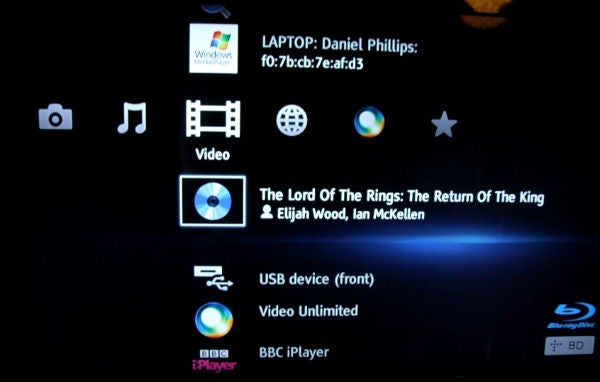 This is fine when there are a small number of items to display, but in the case of the Sony Entertainment Network and its extensive content, the line of options is rather long, which means it takes a long time to reach certain services. Thankfully stuff like BBC iPlayer and Demand 5 are placed near the top.

That aside, it’s a slick, attractive interface. Each web service is accompanied by its logo and it even displays the name and principal actors of the disc you’re watching. There are Video, Music and Photo options, and in each case it lists all the devices containing that type of content. The setup menu initially seems more abstract than usual, but it’s comprehensive and sets up the key functions using useful step by step guides. It also skates smoothly from option to option without any hesitation.

During playback you can hit the Display button to view the video and audio formats, bitrates, chapter, elapsed time and output resolution. Another Options button brings up a sidebar menu that provides quick access to often-used functions, such as title and chapter search and Video settings. With the latter you can select from three picture presets (Standard, Brighter Room and Theatre Room) or apply black and mosquito noise reduction (three incremental settings in each case).

The remote is shorter than your average zapper, which means Sony has stripped the button count right down. It’s sensibly laid out too, with the all-important direction pad in the centre with Return in easy reach. The playback keys at the bottom and large blue keys for Home and SEN are thoughtfully placed. A great effort.

The deck’s Quickstart feature means loading times are fast – Lord of the Rings: Return of the King started playing in 25 seconds, while the trickier Terminator Salvation disc took 43 seconds.

The next platter in the tray was Silicon Optix’ HQV evaluation disc, and the BDP-S490 does a decent job with its demanding test patterns. The Film Resolution Loss test exposed its only weakness, making the vertically striped boxes strobe slightly, but not quite as violently as some decks we’ve tested. The diagonal filter (jaggies) and Video Resolution Loss tests were both handled with the utmost composure and clarity.

Moving to 2D movie playback, Return of the King on Blu-ray looks stunning. Lavish detail, vibrant yet natural colours and crisp edge resolution makes the picture effortlessly inviting, supplying the wow factor that makes Blu-ray so special. The film’s epic action is tracked without any judder issues, while noise is completely absent and dark scenes (like those set on the outskirts of Mordor) are bolstered by dense blacks and excellent contrast, which allows shadow detail to punch through.

But with any high-definition source it’s the detail that really grabs you, and the BDP-S490 lets none of it slip through its grasp. The movie’s sumptuous CG images are spectacularly sharp, particularly the sweeping shots of Minas Tirith as Gandalf rides his horse towards the castle, or the part where Gollum climbs up the side of a mountain – the texture and shading on the rock face is remarkably lucid. This results in a dazzling, poised picture that seems three-dimensional even without the aid of the active shutter system.

But grab yourself some glasses and you’re in for an even bigger treat, as the deck’s 3D picture quality is superb. The 3D edition of Avatar offers up rich, entrancing images, brought to vivid life by the BDP-S490. During the ‘First Sortie’ chapter, shots of the helicopter touching down in the Pandoran rainforest boast wonderful depth, with crisply composed layers that make it look like the picture extends far into the TV screen. Colours are radiant and the razor sharp detail boosts the sense of immersion.

The quality of web-streamed video is a revelation. Videos from BBC iPlayer are sharp and solidly coloured, with only a little pixel fuzz here and there to remind you that you’re not watching a live broadcast.

Impressions of the BDP-S490’s audio talents are boosted considerably by the inclusion of SACD playback, which sounds fabulous, but the deck also makes high-bitrate MP3s and CDs sound great.

The BDP-S490 is a highly impressive Blu-ray player available at a great price, but just three things prevent it reaching top marks – the lack of built-in Wi-Fi, its refusal to play DivX and a menu system that’s starting to creak under the weight of Sony’s growing number of internet apps, making it a hassle to reach certain services.

But those things aside it gets everything right – excellent internet content, hassle-free DLNA streaming, generous socketry, an arresting design and entrancing Blu-ray pictures in 2D and 3D. As a result, it’s hard not to like the BDP-S490, but those seeking built-in Wi-Fi might be tempted to check out similarly priced rivals from LG or Samsung, or step up to the BDP-S590.