The BDP-S360 is the follow-up to last year’s marvellous entry-level Blu-ray player, the BDP-S350. This new and improved version supports BD Live from the box (no firmware update needed this time) and a stack of other features likely to appeal to Blu-ray virgins and veterans alike. Also sure to gain universal approval is the sub-£200 price, which is small beans for a big-name brand.


The deck’s design is unremarkable – the all-black finish and subtle blue light on the fascia are a tasteful combo and the slim, shallow dimensions are undoubtedly appealing, but it doesn’t grab you in the same way as Samsung or Philips’ latest players. The fascia is one big transparent flap that drops down when the tray opens, and behind it is a display panel that shows the elapsed time clearly. Only a few buttons adorn the front, which keeps it clutter-free.


Being an entry-level player, you get a fairly basic selection of sockets on the rear panel, headlined by that all-important HDMI output. It’s a v1.3 affair, which means HD audio bitstreams, Deep Colour and x.v.Colour are all supported. Component and composite ports provide further video output options.

The easiest way of enjoying the deck’s audio capabilities is to connect its HDMI output to a suitably-equipped receiver and set the BD Audio output to ‘Direct’. The player will then output Dolby True HD and DTS HD Master Audio bitstreams (as well as regular Dolby Digital and DTS) via HDMI, and your receiver should automatically detect and decode what’s being played. If your receiver lacks HD audio decoding, the Sony can convert these soundtracks to LPCM so you still get the same hi-res benefits.


Those without HDMI inputs on their amp can use the optical or coaxial digital audio outputs to enjoy Dolby Digital or DTS soundtracks. But anyone hoping for 5.1or 7.1-channel analogue outputs is out of luck – all you get is a stereo pair.


Unlike the Wi-Fi compatible Samsung BD-P3600, the Sony relies on a clunky Ethernet connection to hook up to the web, plus you need to plug a USB flash drive (at least 1GB) in the back to store movie downloads. The PS3 offers Wi-Fi and built-in memory, so we would have liked to have seen the company pushing such features on its standalone players. The step-up BDP-S560 apparently boasts Wi-Fi but we’re not sure if and when this is coming to the UK.

It’s also disappointing to discover that the USB port is only used for BD Live storage and not for digital media playback, which wouldn’t be such a problem had it not been commonplace among its rivals. The Sony’s ability to play only MP3 and JPEG files from CD, DVD and Blu-ray discs rubs salt in the wound.


However, the BDP-S360 ticks most other boxes. 1080/24p output? Check. DVD upscaling to 720p, 1080i and 1080p? Check. BRAVIA Sync? Check. And if your discs have seen better days, they can still be played thanks to Sony’s Precision Drive, which detects and stabilises playback of bent or scratched platters.

The BDP-S360’s operating system is one of the best we’ve encountered. It’s based on the same Xross Media Bar used by the PS3 and as the name suggests the main page displays the content categories in a horizontal bar. Select one, and a vertical bar lists the corresponding options. Its large, funky icons and jazzy backgrounds make it a treat for the eyes, plus it glides around with rare responsiveness.


There are some equally nifty touches elsewhere – hit Display during playback and the onscreen menu gives you every piece of info about the disc, including the video format and bitrate.


Press Options and a list zooms in from the right of the screen, offering a few playback options and access to the video and audio adjustments. On the video side, there’s a choice of Picture Quality Modes for different viewing environments (Standard, Brighter Room or Theatre Room) as well as three noise reduction modes. For audio, you get AV sync and analogue Audio Filter settings.


Topping off this exemplary operating system is an intuitive remote, which boasts nicely sized and sensibly placed buttons. All the playback keys are grouped together and the central direction keys make menu navigation a cinch. And when you need to return to the main menu, the Home button is unmissable. 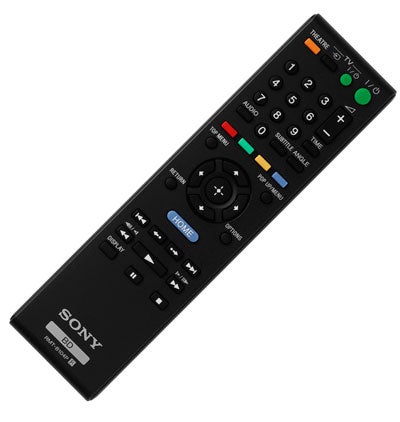 The inclusion of a Quick Start mode means the Sony takes just six seconds to boot up. Standby power consumption is higher with this mode activated, but who cares about the environment when you can start watching hi-def movies quicker? We joke of course, but eco-warriors can rest assured that it only takes 22 seconds to boot up without it.


Sadly it’s not quite as quick at loading Blu-ray platters – with our benchmark Spider-Man 3 disc, the intro video appeared 53 seconds after pressing close on the disc tray, twice as long as the Samsung BD-P3600 and LG BD370.


Thankfully the BDP-S360 makes up for it with tremendous pictures, demonstrating that you don’t necessarily need to pay through the nose to get yourself a decent Blu-ray performer.

We slipped Warner’s superb I Am Legend disc into the tray and right from the off the Sony dazzles – the eerie shots of post-disaster New York look deep and three-dimensional, and are packed from edge to edge with crisp detail.


The wide contrast range and punchy blacks lend a convincing sense of perspective to the rows of skyscrapers, while small text, distant windows and weeds bursting through the roads all look razor sharp. Colours are also beautifully judged, from Will Smith’s deftly shaded brown skin to the bright flashing police lights during the evacuation scene.

We’re also impressed by the player’s consistently fluid 24p motion handling. Camera pans don’t judder at all and Will Smith’s red car is tracked with effortless stability and focus.


Good though it is, the Sony certainly isn’t the last word in Blu-ray picture quality. More expensive players like the Panasonic DMP-BD80 or the Denon DVD-3800BD increase the wow factor further with even better detail retrieval, more effective noise reduction and punchier blacks, but in this price range there aren’t many better.


This deck certainly punches above its weight with the Silicon Optix HQV Blu-ray disc – apart from some strobing in the corners of the Video Resolution test, it doesn’t put a foot wrong. Diagonal edges on the Jaggies tests are smooth as a baby’s bum and rotate without judder, while the HD colour bars are bleed-free and the panning shot across the empty stadium looks sharp and composed.

The deck also turns in a strong performance with DVDs. The bamboo fight scene in House of Flying Daggers (chapter 11) is masterfully reproduced, with no jaggies on the long bamboo poles, gorgeous organic-looking greens, smooth motion tracking and plenty of depth. DVD torture tests are also ably handled, particularly when it comes to jaggie suppression and detail rendering.


These top-drawer pictures are backed up by crisp, punchy sound quality from any source. I Am Legend’s Dolby True HD track is conveyed with relentless energy and bags of detail, while music playback over the HDMI or analogue connection is well balanced but can’t match the control or transparency of a Pioneer or Denon deck.


The BDP-S360 is a fine budget Blu-ray player for the money, particularly if you’re looking for your first high-definition deck. Compared to rival players from the likes of Philips, Samsung and Panasonic, the spec is basic – there’s no Wi-Fi support, built-in memory, multichannel analogue outputs or USB digital media playback – but that’s reflected in the bargain basement price tag. Blu-ray newbies will probably be more interested in the impressive hi-def picture quality and user-friendly operating system, two key reasons why we’ve warmed to this deck despite its limitations.