Just when it looked like HD DVD had the upper hand in the high-definition format war, along came Warner to pull the rug out from under its feet. Its decision to go exclusively Blu-ray from May (with Paramount rumoured to be following suit) has prompted many experts to predict that the format war could be over by the end of 2008.


HD DVD still has a price advantage thanks to Toshiba’s frantic price slashing, but even that’s being slowly eroded by the new batch of ‘mass market’ Blu-ray players that boast more affordable prices than the first decks launched over a year ago.


One such player is the Sony BDP-S300, which is a good £400 cheaper than the company’s debut deck, the BDP-S1E, making it one of the cheapest Blu-ray decks available. But Sony hasn’t compromised on build quality to achieve this – the S300 is an attractive and well-made piece of kit, with a blue-tinged translucent fascia and fetching dark-grey finish elsewhere.

And taking a look at the feature list, it appears that Sony hasn’t cut too many corners here either in order to reach this attractive price. The only significant omissions are Dolby True HD, DTS HD and DTS HD Master Audio decoding, but otherwise the spec sheet is in pretty good shape.


The deck decodes Dolby Digital Plus, Dolby Digital and DTS, upscales DVDs to 1080p, plays MP3 and JPEG files and even spins high-definition MPEG-4 AVC-HD footage stored on a DVD. It supports content encoded with x.v.Colour technology (Sony’s name for the xvYCC standard), which extends the colour range and offers more accurate and vivid reproduction (if you’ve got a TV that can display it) but it’s worth noting that this differs from Deep Colour.


The BDP-S300 is a Profile 1.0 player, which means it’s not compatible with Bonus View (Profile 1.1) discs containing picture-in-picture features. This lack of futureproofing could make the deck outdated very quickly, and it’s unlikely that it can be upgraded.

As expected, the rear panel lacks an Ethernet socket, which you’ll find on every HD DVD player going, but there are plenty of other sockets. Apart from the HDMI output (which we’ll discuss in a minute) you’ll find component video, S-video and composite video outputs, though quite how useful the latter will be is anyone’s guess. On the audio side, there are optical and coaxial digital audio outputs (to send Dolby Digital and DTS bitstreams to your receiver) and 5.1-channel analogue outputs to take advantage of decoded multi-channel soundtracks.


Like the step-up BDP-S500, the HDMI output is version 1.3, which will output 1080/24p pictures (dubbed ‘True Cinema’ here) and up to eight channels of linear PCM audio. 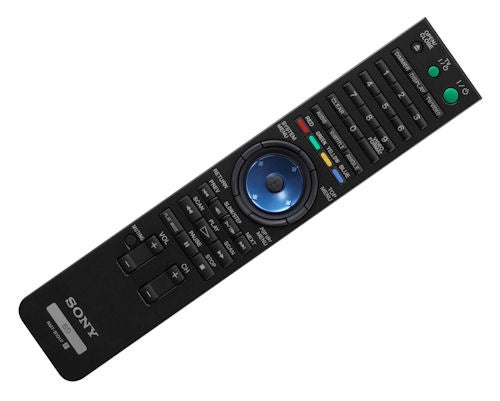 The player takes an age to boot up (around 90 seconds), but we’ve come to expect that from high-definition disc players, and once you’re into the deck’s menu system there are no complaints. The menu design is highly polished and responds instantly to remote commands. The remote itself is superb, boasting a thematic blue control dial and a clever button arrangement that makes it simple to use. One operational word of warning – if you turn the power off mid way through a film, you can’t resume the movie from where you left off.


The BDP-S300’s picture quality is stunning, with no flaws to report. We tested it out with Die Hard 4.0 on a Toshiba 52Z3030D TV, and as expected the deck’s detail reproduction really stands out. The level of sharpness on offer is astonishing, making images look crisp and almost three-dimensional.


Aerial shots of Washington D.C. are highly impressive, with the deck making light work of tiny details like windows and brickwork on buildings. Further evidence of the Sony’s detail-handling prowess can be seen during shots of Bruce Willis, whose stubble looks unusually sharp and realistic – it’s possible to make out individual hairs, which is something you’d never see on DVD.

Colour reproduction is also on the money, not only making John McClane’s blood-flecked skin tones look well-balanced and believable, but also doing a grand job with richly saturated hues. It’s helped along by strong black levels and a complete lack of noise and artefacts.


This strong picture performance continues when you stick a DVD in the tray. When upscaled to 1080p, our copy of The Departed stands up well to close scrutiny, with crisp detail reproduction, vibrant colours and no jaggies or motion judder to speak of.


The BDP-S300’s inability to decode DTS HD Master Audio means we weren’t able to enjoy the Die Hard 4.0 soundtrack in all its glory, but its regular DTS track sounds phenomenal via the digital audio output or the 5.1 analogue outputs. The movie’s audacious climax might look overblown but the Sony makes it sound absolutely scintillating, with every bang, crash and wallop reproduced with window-shattering clarity.


The deck also proves to be a dab hand with stereo material, offering punchy CD and MP3 playback – though we think Sony missed a trick by not including SACD support.


The BDP-S300 might be one of the cheapest Blu-ray players on the market but be prepared to make sacrifices if you buy one – it only supports one of the four HD audio formats and its Profile 1.0 spec means you won’t be able to access Bonus View features.


And despite the format’s recent setbacks, it’s also worth remembering that HD DVD players like the HD-EP30 can be found for under £200, and come equipped with all the features missing from the BDP-S300. The other thing to consider is that you can buy a PS3 for around the same price online, which also plays Blu-ray and gets you hi-def gaming into the bargain.


But if you’re convinced a dedicated Blu-ray player is the way to go, then the S300’s immaculate picture quality and slick operating system makes it a decent choice, if not the last word in Blu-ray technology.