Installing and operating the Sony BDP-S1100 is a slick, hassle-free experience. Once the cables are connected, fire it up and a step-by-step wizard guides you through important settings. Network setup is equally simple – plug in your Ethernet cable, run the ‘Easy Network Settings’ option and it connects within seconds. 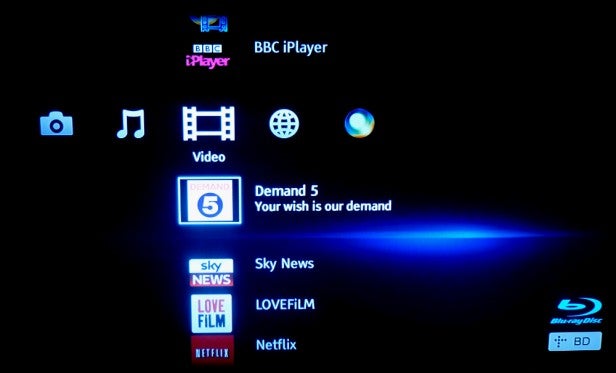 The main menu uses the excellent Xross Media Bar design. A row of icons runs horizontally across the middle (Setup, Photo, Music, Video, Network and Sony Entertainment Network), which is vertically intersected by a list of options for the selected category. It’s not hard to see why Sony has stuck with this polished, intuitive design for so long. 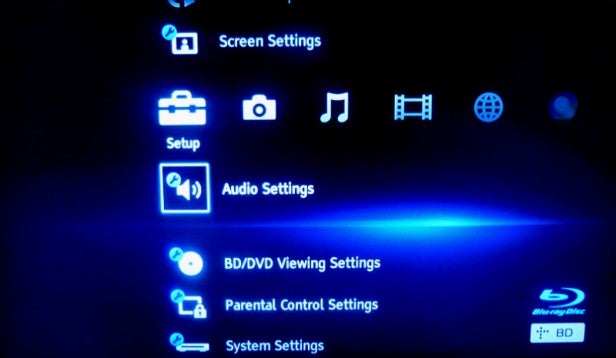 Select Video, for example, and all the video-related apps appear in the menu. Sony’s extensive range of content means the list stretches down a long way – a redesign is surely on the cards – but it scrolls quickly and thumbnail logos make each service easy to spot. If you prefer, there’s a dedicated Sony Entertainment Network screen, where all the apps are displayed alongside Sony’s video and music content.

Hit the Sony BDP-S1100’s Options button during playback and a menu slides in from the right-hand side of the screen. Here, you can access information about the disc, switch audio tracks and activate subtitles.

The remote gives us no cause for complaint. Its buttons are intelligently placed, nicely sized and clearly labelled, and we like how the important Home and SEN keys are coloured blue to stand out. Its compact shape also fits snugly in the hand.

It’s a good job Sony has made the physical remote so useable as the Sony BDP-S1100 doesn’t support Sony’s TV Side View app for smartphones and tablets.

Thanks to the Quick Start-Up mode, the Sony BDP-S1100 boots up almost instantaneously, although it uses more power in standby when activated. It also loads discs quickly – the tricky Terminator Salvation disc took just 30 seconds to start playing after shutting the tray, while most other discs started in about 20 seconds.

Despite its entry-level price tag, the BDP-S1100’s 2D pictures are as good as players costing twice as much. When playing Iron Man 3 for example, the screen positively sizzles with detail. Brightly-lit outdoor scenes show the Sony at its best – as Tony’s home is blasted to bits, the crumbling cliff face is rendered with intense sharpness, likewise the ornate, leafy surroundings of the Mandarin’s compound.

Dark scenes also look fabulous. Shots of Tony Stark beavering away in his lab at night are clear and easy to watch, with solid shadow detailing and smoothly gradated background walls, while Christmas tree lights punch crisply through the gloom.

Colour reproduction is spot-on. Skin tones look natural and bold colours blaze from the screen, demonstrated by the deep blue sky during the skydive scene. We’re also impressed by the smooth, judder-free motion and the way the Sony draws edges with fantastic clarity.

Switching over to the demanding Silicon Optix HQV disc, the budget Sony BDP-S1100 handles the torture tests like an old pro. The cadences of both the Video and Film Resolution Loss patterns are quickly identified and smoothly displayed. There’s a touch of flicker on the latter but nothing ghastly. The camera pan across the stadium is also handled with admirable stability, removing moiré noise from the upper seats and keeping jaggies at bay.

None of this will particularly matter when ploughing through a Breaking Bad boxset on your 26-inch bedroom TV, but it’s nice to know there’s some decent processing ticking away under the bonnet.

If you’re after a Blu-ray player that makes hi-def movies look as good as possible, and you aren’t too fussed about flashy network tricks and 3D, then the Sony BDP-S1100 is an excellent purchase. It does the basics brilliantly.

It’s stylish, compact and incredibly easy to use, which some buyers may consider more important than things like Wi-Fi or DLNA (both of which this player lacks).

It’s not completely devoid of features though, with media playback via USB and a terrific range of internet content, if you don’t mind rigging it up via Ethernet – just a few reasons why the Sony is a top budget buy.

Features are scarce, but the Sony BDP-S1100 is an otherwise impressive sub-£100 player – it’s stylish, easy to use and delivers slick HD pictures