The HDR (high dynamic range) era is seeing TV brightness take centre stage in a way it never has before. In fact, as Dolby so succinctly put during a visit to its CES stand, we’re about to enter a ‘nit race’.

If that’s the case then it’s fair to say the nit race already has a pacemaker. Sitting pretty in a prominent corner of Sony’s CES booth was a TV – an 85-inch TV at that – claiming to be capable of outputting 4,000 nits of brightness.

If you’re not sure exactly how extreme a brightness figure that is, a typical LCD screen outputs somewhere between 300 and 500 nits. Even specially developed HDR TVs peak at about 1,000 nits.

Related: Why you should care about HDR

Sony’s 4,000-nit screen is currently only a prototype. It’s not likely to find its way into your local Currys any time soon. But the so-called Backlight Master Drive that powers it is nonetheless very real, and the 4,000 nit count tallies with the luminance level some film studios are mastering movies to when creating HDR versions.

The Backlight Master Drive is not the first 4,000-nit screen the world has seen, though. That honour belongs to the model Dolby knocked up for CES 2015. But Sony’s model thankfully doesn’t need an external cooling system – and also delivers much more impressive and engaging pictures.

The key to the Backlight Master Drive’s HDR-friendly brightness is its combination of a direct backlight LED array composed of more than 1,000 independently controllable lighting zones, and an ultra-powerful version of Sony’s X-Tended Dynamic Range technology. The X-Tended tech reduces power in dark picture zones so it can push more power into bright areas.

In an unusual move for Sony (which tends to play its technology cards close to its chest), alongside the finished Backlight Master Drive screen was another sample with its front removed to expose the backlighting system. Watching the backlight deliver deep blacks next to peak whites, with enough precision to let you clearly follow in silhouette the video images being shown on the finished screen, was a mesmerising experience. 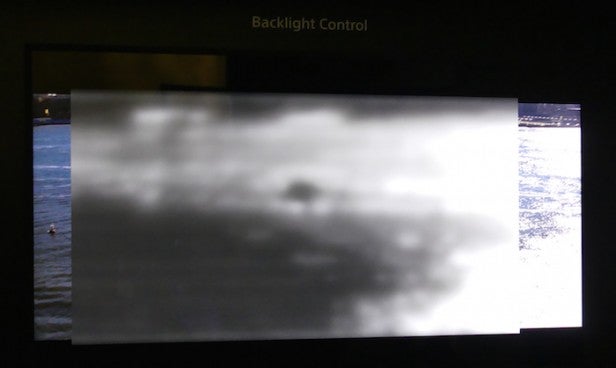 I didn’t notice any individual clusters of light, and did’t see any obvious signs of light contamination – where light from the clusters driving the bright parts of the picture leaks into the dark parts.

The new backlight delivers mostly jaw-dropping results. With a scene from Annie, the Backlight Master Drive lived up to its name and did a masterful job martialling all the light at the screen’s disposal to produce a breathtakingly punchy, colour-rich but also gorgeously nuanced picture.

There was subtle shadow detail and colour information in the image’s dark areas that wouldn’t normally be visible. Skin tones looked so real it was almost scary. Eyes sparkled in a way you just don’t see with current TV technologies. The image seemed to be propelled off the screen with so much intensity – even under the harsh glow of the CES lights – that it seemed to embed itself directly into your brain, drawing your attention away from everything else. The image’s 4K detailing sparkled with its clarity, and shots across New York enjoyed a sense of depth that makes true 3D look almost pointless.

The other half of Sony’s demo footage, featuring shots of the neon-drenched world of night-time Las Vegas, further underlined how awesome Sony’s futuristic panel is. The intense neon tones punched out of the screen like lasers, without looking unnatural, off-key or cartoonish. What’s more, there was no hint of their colour tones escaping into the often pitch blackness of the Vegas night sky that surrounded them.

This latter point was underlined even more with shots of bright street lights picked out against a nearly pure black sky. Despite the lights looking more intense than you would imagine, the night sky totally avoided the grey wash you might expect with a very bright LCD TV. There was seemingly no backlight-induced grey haloing or blocking around even the very brightest points of light. 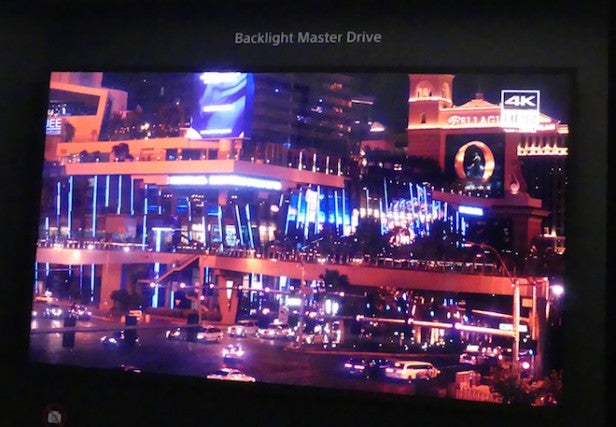 Overall the best way to describe the Backlight Master Drive picture is that it looks remarkably close to real life. Maybe even a slightly exaggerated, better-looking version of real life. This means it’s likely that one day, maybe in a less distant future than you might think, all TVs will be capable of producing pictures that look something like this. Which is mostly absolutely fine by me.

Why only mostly? Because every now and then during the CES demo, such as when the Annie footage featured sunlight glinting off the Hudson river, I actually found myself having to squint. This may well also be my reaction if I was looking at a glinting Hudson in real life, of course.

However, in real life you’d likely also either put on a pair of sunglasses or else just turn away to protect your eyes. And while I’m all for TVs delivering realism, the need to wear shades on your sofa is possibly going a touch too far!