The Sony Alpha A99 is the company’s latest full-frame DSLT (A DSLR without the mirror). It’s a serious camera, with a 24-megapixel sensor – that’s more megapixels than you get with key rival the Canon 5D MkIII – and a host of professional-grade controls. Plus its a deal smaller than some of its full-frame rivals too. On paper there’s plenty to like here, but can it take the fight to the new Canon EOS 6D? We’ve spent some time with the new Sony Alpha A99 to get a first impression.

Sony Alpha A99 design and body
There’s a real sense of completeness to the Sony Alpha A99. This is well-specified product, and its buttons and controls are squeezed tightly into every possible space about the body. Yet, despite its professional billing, the camera’s light weight – at least relative to its older full-frame DSLR peers – is unmistakable. It’s small and light for a camera of its spec, but the hand grip makes it chunky enough for even giant-handed folk. 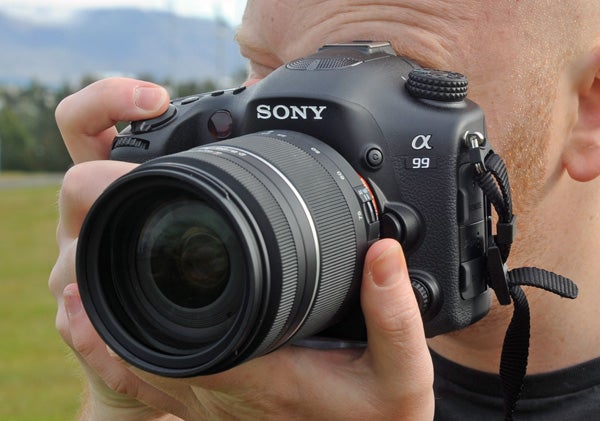 The Sony Alpha A99 complements its array of controls with a smooth and rounded outer casing. It’s much less angular than the rival Nikon D800, for instance. Sony has paid close attention to the finer details too, such as the mode dial’s rubber sides and buttons that travel a way into the body when pressed.

Sony Alpha A99 viewfinder and screen
Adjusting the Sony Alpha A99 vari-angle LCD screen away from the camera’s body is also far easier than expected.  It’s much more accessible here than on some of the Sony NEX cameras that sport the same feature. The groove to access the screen is large, and the hinge moves freely, the key to its easy mechanism. It’s true that articulated LCD screens are nothing new, but to be able to adjust the Alpha A99’s screen in three separate directions can be incredibly useful in certain situations. 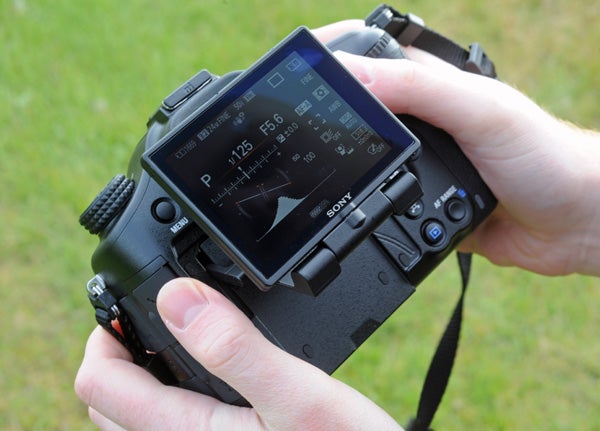 The Sony Alpha A99’s OLED viewfinder is highly detailed thanks to its blistering 2369k-dot resolution, and responds fluidly when light levels or scene content changes. And, even though the rear display is not based on the same OLED technology but LCD, its viewing angle appears high enough to maintain a clear view regardless of your position.

Viewing angle performance is arguably less important with a screen that can be adjusted in so many ways, but it’s nice to see Sony hasn’t used that as any excuse to get away with packing a less-than-usable screen into the Alpha A99. 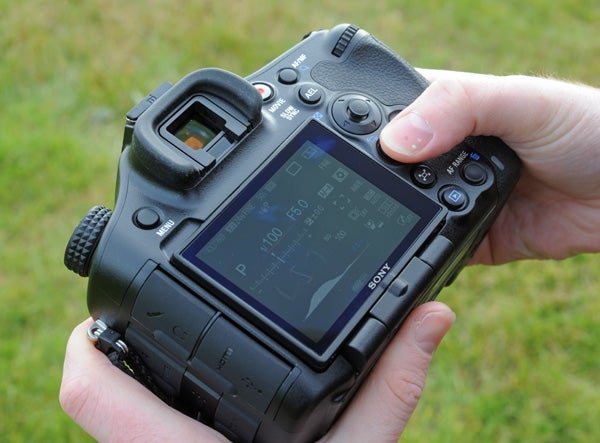 Sony Alpha A99 performance
One part of the Sony Alpha A99 that looks set to be widely appreciated is the new Silent Controller, located just next to the lens release button. This settings control will not just be useful to videographers, for whom the control is intended, as it can quickly be used to access ISO settings, metering modes and exposure compensation among other things. It works in much the same vein as the iFunction button found on many Samsung lenses. This impresses in use simply because it’s placed so conveniently for quick access, and means that settings can be changed without recourse to the main or Function menu. 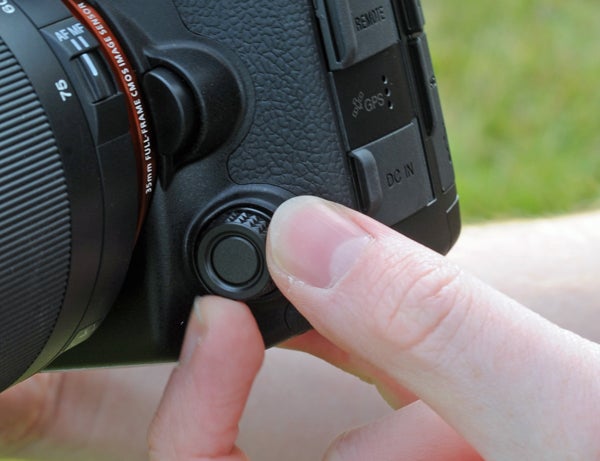 Despite the model we used not being a full production sample, many aspects of its performance appeared to be sound, including the time it took to write a burst of RAW and JPEG images to an SDHC card. In fact, many of the issues we found are more personal preferences rather than flaws inherent in the design of the camera itself. Those with smaller hands, for example, may find themselves often needing to overreach to access certain controls, due to the size of the body. And, conversely, those with larger hands may find the front command dial a little too close to the grip’s groove for the middle finger. 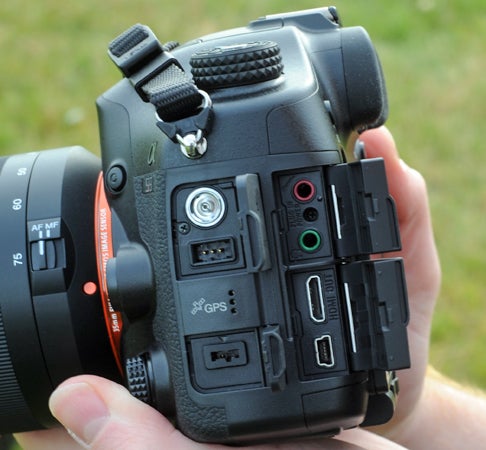 The only things we found which may be applicable to a wider range of users include a slightly slow AF performance from the 28-75mm F2.8 SAM lens which is bundled with the Alpha A99, and a rather loose door to the side which accesses the microphone and headphone ports. This being easy to open perhaps doesn’t sound like too significant an issue, but shooting with the camera for a few hours in wet and windy conditions made it obvious how much this compromises the camera’s weatherproofing. Of course, this may be rectified in the final production samples.