It’s also comfortable to hold in one hand thanks to its perforated and nicely textured grip.

Bear in mind that the A5000 is designed to be affordable rather than rugged so, while its matt-black plastic build is solid enough, the camera is unlikely to take the level of bashing that, say, a child might mete out to their favourite toy truck. In other words, we’d advise against dropping it. 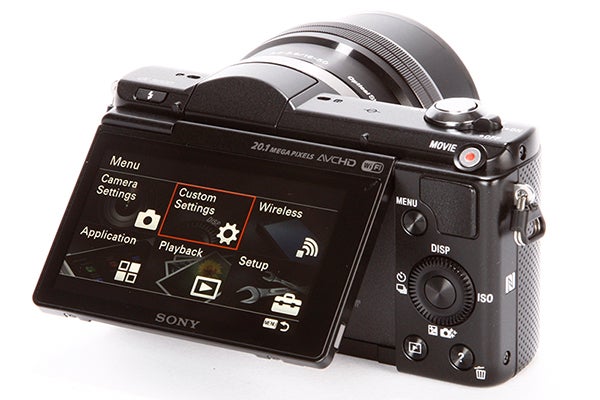 While A5000 is a step up from a point-and-shoot model, there’s not much in the way of physical controls – only a wheel/D-pad and a single customisable button for accessing settings and shooting modes.

The dedicated button that activates video recording is situated on the rear of the camera, below the shutter.

Display mode, ISO, exposure compensation and drive mode are included on the D-pad, with the scene mode positioned in the centre of the selection wheel. 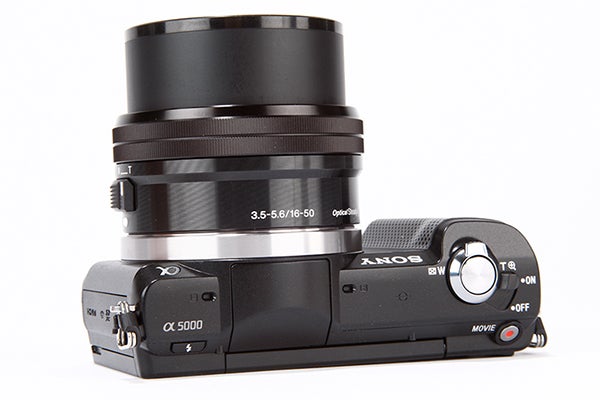 A question mark denotes the custom function button, which can be reassigned to function as a commonly used feature such as Focus Type, White Balance or Metering. A second customisable button would have been welcome so that there was less need to dive into the menu to access oft-used modes such as Autofocus.

Its LCD screen can be flipped 180 degrees to face forward – as could that on the NEX-3N.

The A5000 lacks a hot-shoe, but that’s a common omission with this level of camera. There is a built-in pop-up flash but when in use this sits awkwardly in front of the screen and thus can obscure composition.

All in all, though, the A5000 is very easy to use, but its small size may mean those with larger hands or who are wearing gloves may find it fiddly. 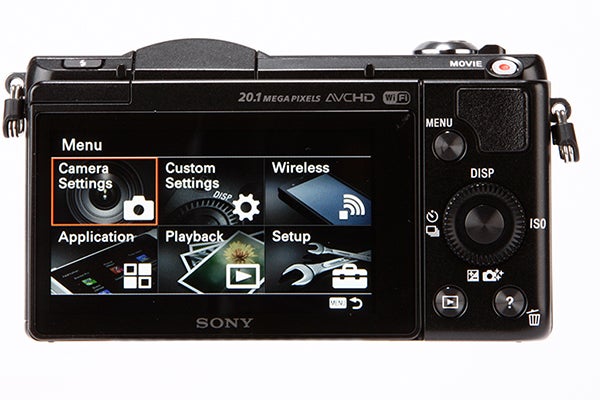 The best place to start with the A5000’s performance is most likely its system, and to comment that the performance of continuous-AF mode is particularly disappointing.

For instance, when attempting to focus on relatively fast-moving subjects the camera struggled to keep up and  we consistently failed to capture them in focus.

Meanwhile, in lowlight the AF doesn’t hunt so much as hone in slowly, or fails to focus entirely. This isn’t helped by the AF-assist beam being so close to the grip that it is easy to accidentally obscure it. 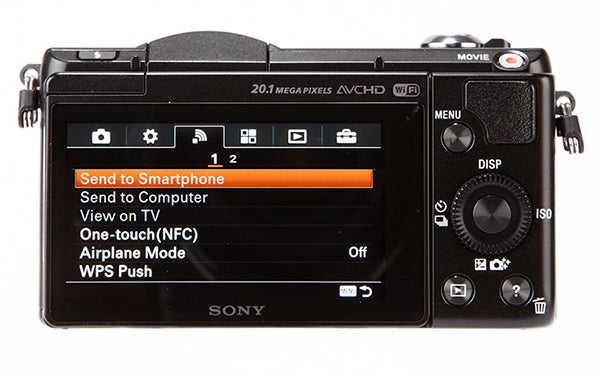 In most shooting situations it was Multi-area autofocus that was the most reliable setting. Face detection is best for portraits and group photos, recognising and locking onto faces very quickly, even in low light.

The A5000’s metering is also fairly reliable. Even under challengingly bright conditions the A5000 isn’t afraid to push highlights to the edge for the sake of rendering good detail in the shadows. The metering is well-balanced when faced with a high-contrast scene, with highlights in key areas maintained by using effective exposure compensation to resolve valuable image information.

Under overcast or cloudy skies, the evaluative system does a good job of recognising foreground subjects, reproducing an evenly lit subject with details intact, even from a JPEG.

As the autofocus is linked to the exposure setting, consistent results were achieved by sticking with evaluative metering and focusing on darker areas of the scene, half pressing the shutter then re-composing the frame. Centre and spot metering functioned well for portraits and specifically chosen subjects. 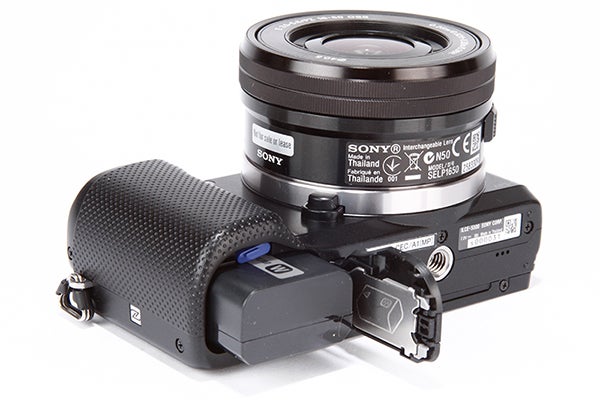 Sony has included a ‘Sunny Weather’ screen brightness option in the setup menu to offset this, but even so it can be difficult to compose shots, as the supporting gridlines themselves can be hard to see. This isn’t a touchscreen, either, so you’ll miss out on quick and easy ‘touch to focus’ options.

Full HD video in MP4 and AVCHD formats with stereo sound is available at the push of the dedicated Movie button. It’s good enough for filming such things as family occasions, holiday moments and video blogging. The SteadyShot feature adds smooth filming capabilities, while colours and highlight detail are rich and satisfying.