As a relative newcomer to the digital SLR market, having launched its first model only three years ago, Sony has made a surprisingly large impact, with the latest report that I’ve seen placing them third in worldwide DSLR sales after Nikon and market leaders Canon, outselling established brands such as Pentax, Olympus and Fujifilm. The key to this success has been a well-structured range of good quality cameras at relatively affordable prices, ranging from the entry-level 10.2MP A200, available for under £300 including lens, the mid-range 14.2MP A350 at just under £400, the excellent (but due for an update) A700 at around £675, all the way up to the 24.6MP full-frame A900, currently selling for around £1,900 body only.


Sony has recently launched the first three examples of its third generation of DLSR cameras, including the new entry-level 10.2MP A230, the mid-range 14.2MP A380, and today’s review camera the A330, which is sold in the UK exclusively through Jessops.


The new models all share very similar all-new body designs, finally shedding the last traces of the Minolta Dynax design elements that Sony inherited along with Konica-Minolta’s DSLR technology back in 2006. The A330 shares the same body and features as the more powerful A380, including a 2.7-inch fold-out monitor screen with live view. 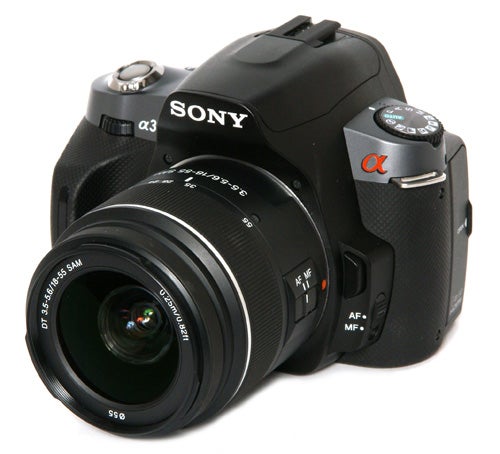 The new body shape looks a lot more contemporary than previous models, with sharper edges and broader curves, but it won’t be to everyone’s taste. The big comfortable handgrip of the A200 and A350 has been replaced with a smaller thinner half-height grip, with the shutter button and adjustment wheel placed on the camera body rather than on the top front of the grip. Personally I found this to be a rather awkward arrangement, with the adjustment wheel particularly hard to reach when holding the camera for shooting. 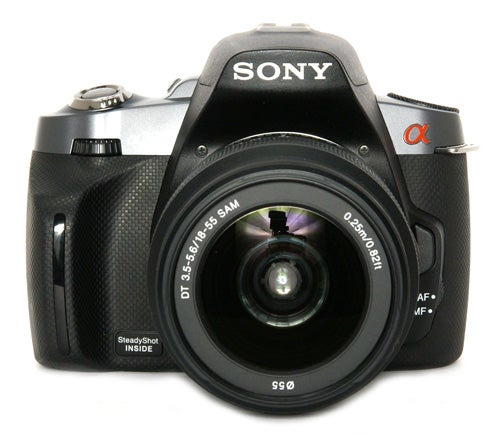 Although the A330 is a relatively small camera the body is a lot thicker than other similar models, and despite the textured rubber coating over the lower half of the body, and the sculpted thumbgrip on the back, I found the camera to be awkwardly balanced and slightly uncomfortable to hold.

The overall build quality is about average for an entry-level DSLR, which is to say adequate but not brilliant. Admittedly I have spent a lot of time over the past few weeks using a variety of very expensive professional-quality DSLRs, but even so the A330 feels quite toy-like compared to many other APS-C DSLRs. The body shell is plastic and does feel a bit thin in places, although it’s well finished and the controls are solidly and sensibly placed. A 490g body-only it’s 40g heavier than the Canon EOS 1000D, one of its main competitors, but I wasn’t too impressed by the build quality of that camera either. 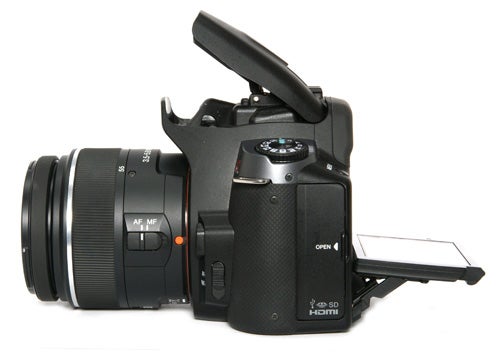 The external hardware is also a bit on the average side. The monitor is no better than one would find on a good compact, with a diagonal size of 2.7 inches, 230,400-dot resolution and a viewing angle of about 160 degrees. The viewfinder is not so good. It is distinctly tunnel-like, with a very small viewing area even compared to previous Sony models.


One novelty is the unusual sliding hatch over the card slots and connector sockets, which include HDMI output. The A330 has dual card slots for both Sony’s proprietary Memory Stick Duo cards and the more popular SD cards. 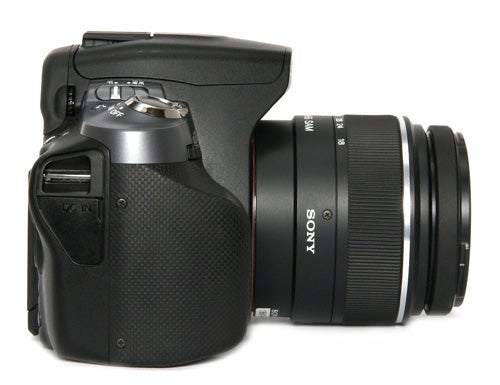 As with most current consumer DSLRs the controls bear more resemblance to those of a high-end compact than a traditional DSLR, no doubt intended to accommodate first time DLSR owners. The on-screen data panel offers tips for novices, as well as a useful chart showing the relationship between aperture, shutter speed and depth of field. The main shooting mode dial has the usual Auto and P/A/S/M manual modes, but also includes six scene programs. The Function button on the back brings up a brief menu with some creative options, but again they are no more sophisticated than one would find on a good compact. AF mode and area, metering mode, D-Range Optimiser setting and White Balance can be adjusted on screen, and there is some limited tonal control, with a range of presets that can be customised for contrast, saturation and sharpness. Adobe RGB and sRGB colour spaces are available, and the camera can shoot in Raw and Raw + JPEG modes, as well as Fine or Standard JPEG.

Even compared to previous Sony entry-level models the Alpha A330 lacks a few useful features. For instance the Alpha A100 had a 2-second self-timer with mirror lock-up. The mirror lock-up was dropped for the A200, but the A330 lacks even the 2-second self-timer. It also has no socket for the cheap cable remote that could be used with most of the previous models, although there is an optional £40 wireless remote control. One notable lack is a video mode, which is fast becoming the must-have feature for DSLRs this year. 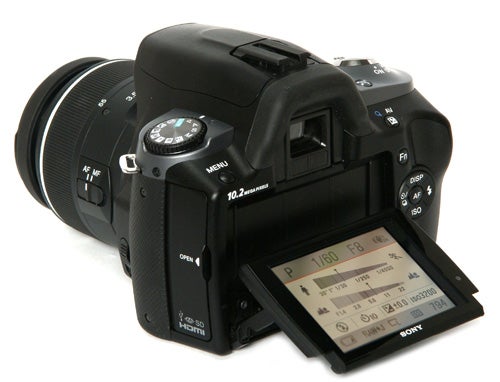 One feature it does have though is Sony’s excellent live view mode. This puts most other manufacturers’ live view modes in the shade, offering as it does full nine-point phase detection autofocus without the need to flip the mirror down for focusing. It does this by using a second image sensor in the viewfinder/AF light-path to power the live view mode, rather than using the main imaging sensor. This probably accounts for the slightly bulky shape of the body, but it does produce a live view mode that works, providing fast, accurate autofocus and a faster shooting speed. 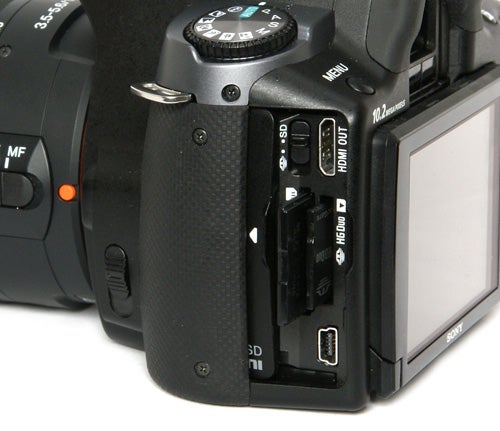 Another point worth noting is that the kit lens supplied with the A330 is Sony’s new smaller, lighter 18-55mm f/3.5-5.6 standard zoom, and I have to say it’s a massive improvement on Sony’s previous 18-70mm kit lens, which suffered from poor corner sharpness and chromatic aberration. The new lens produces image quality not far short of the superb but expensive (£550) 16-80mm Carl Zeiss T* f/3.5-4.5 that is also available for Sony DSLRs. I’ve included some test shots taken with these lenses for comparison.

In terms of performance the A330 is nothing too special. Like most DSLRs it starts up extremely quickly in about a quarter of a second, and shuts down again just as fast, although it does briefly run the sensor cleaning system on power-off. In terms of shooting speed, in single-shot mode it is pleasantly quick to use. The nine-point AF system is nice and fast, and with the focus points well spread over the frame it copes well with off-centre subjects. It focuses well in low light, using a pulsed flash as an AF assist lamp. However the pop-up flash itself is surprisingly underpowered and doesn’t fill the corners of the frame in a normal size living room. 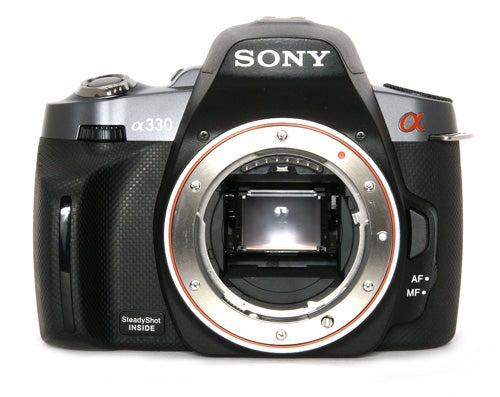 In continuous shooting mode the A330 isn’t going to break any world records. It can maintain 1.25fps, which is pretty slow by comparison to most of its rivals, but it can maintain the same speed in Raw + JPEG mode and also in live view mode, which is more than some others can claim. 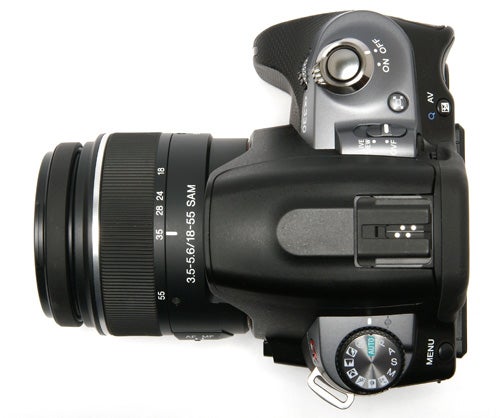 Picture quality is pretty much indistinguishable from any of Sony’s previous 10.2MP DSLRs, which is to say that it’s very good under most circumstances. The built-in sensor-shift image stabilisation system provides a reliable two to three stops of extra hand-held stability, which means sharp hand-held pictures even at around 1/20th of a second. Exposure metering is generally accurate and copes well with backlighting, and the D-Range Optimiser helps with very high contrast situations. Colour rendition is also very good, but where the camera has real problems is with image noise. Even at 400 ISO there is visible noise and loss of detail in the darker areas, and at 800 ISO there are major colour artefacts on areas of gradient tone.

Although it does feature an exceptionally well implemented live view mode on a decent-sized tilting monitor, the Sony Alpha A330 is distinctly an entry-level model, with a limited range of features and options. While those upgrading from a compact camera will feel right at home, more experienced photographers will find its limitations restrictive. Build quality is adequate and the camera looks good, but the new body design is awkward to use. 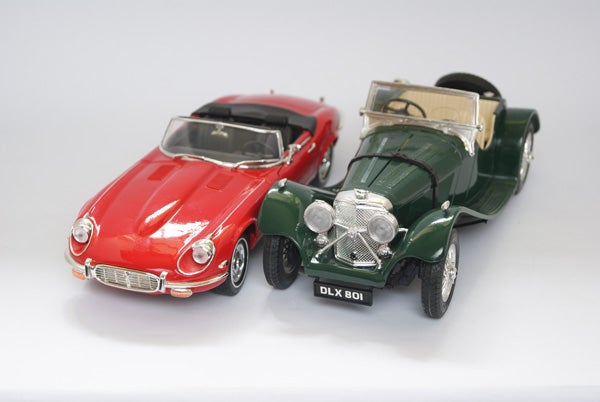 This is the full frame at 100 ISO. The shot is slightly over-exposed, because apparently the A330 takes the exposure reading before starting the self-timer countdown. 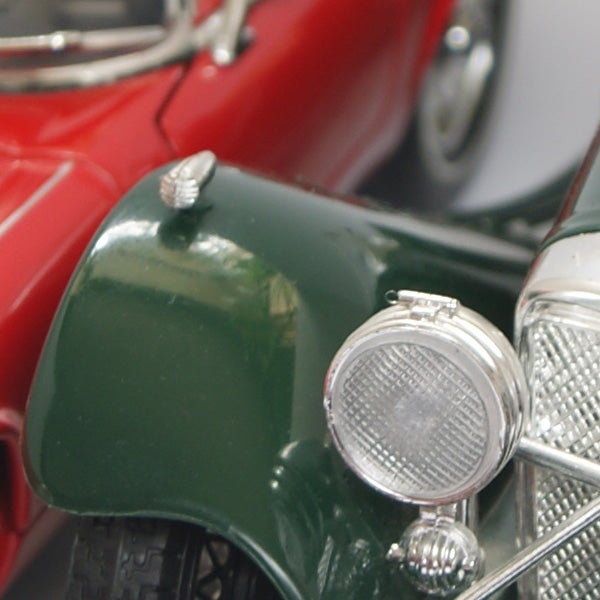 Over-exposure or not, there is no visible image noise at 100 ISO. 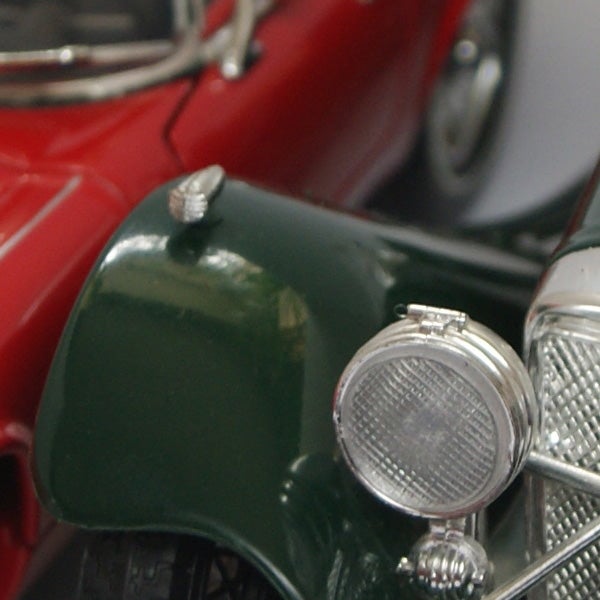 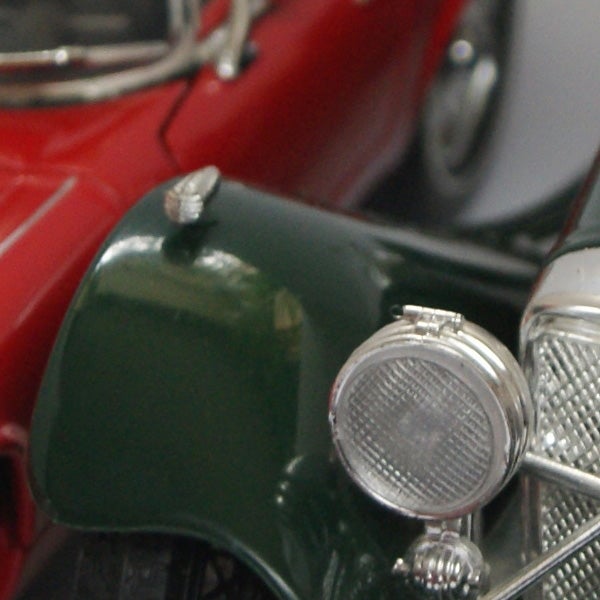 At 400 ISO there is visible colour noise and some loss of fine detail. 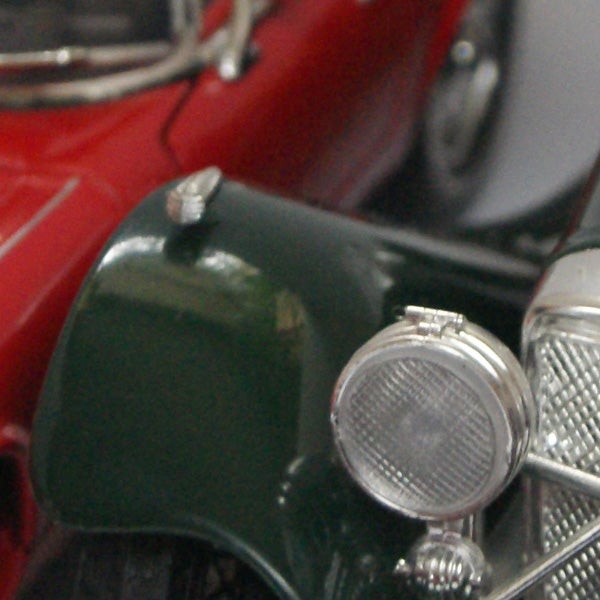 At 800 ISO the colour gradient on the side of the red car is looking very rough. 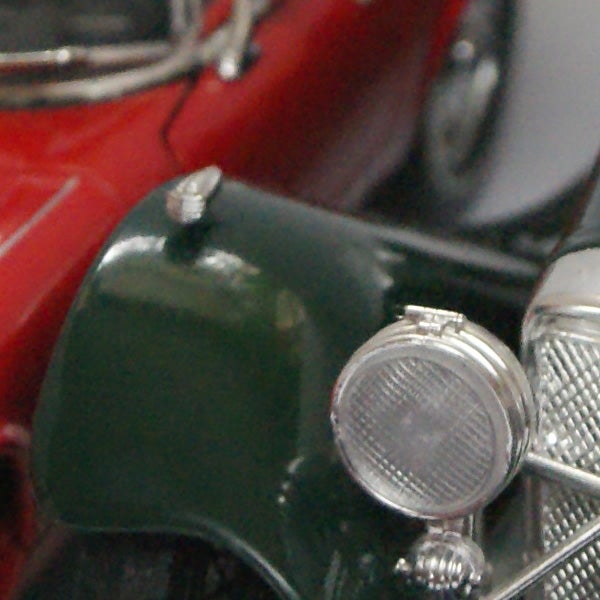 1600 ISO is too noisy for serious work, but would be OK for small prints. 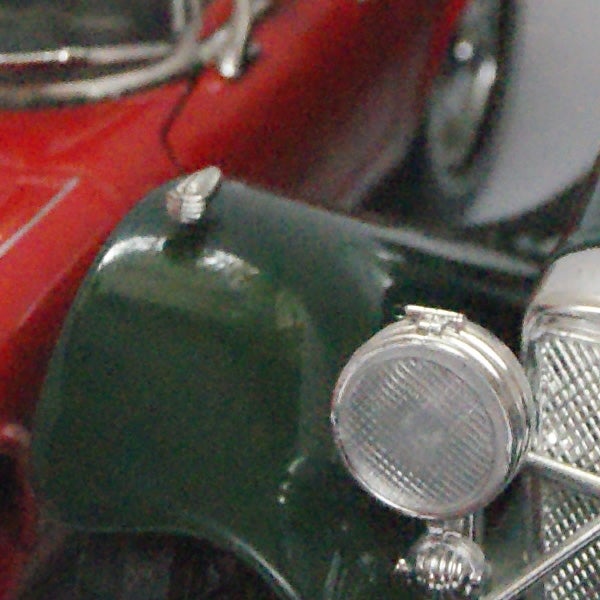 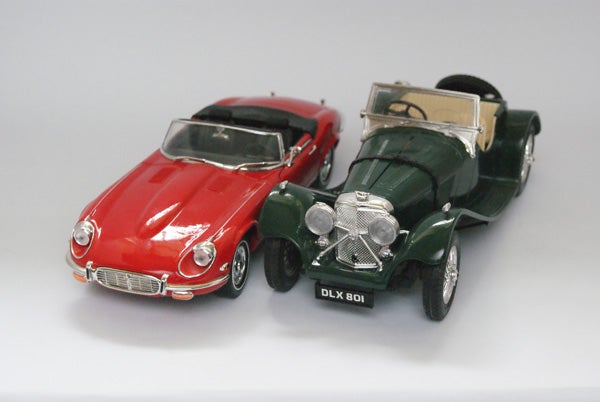 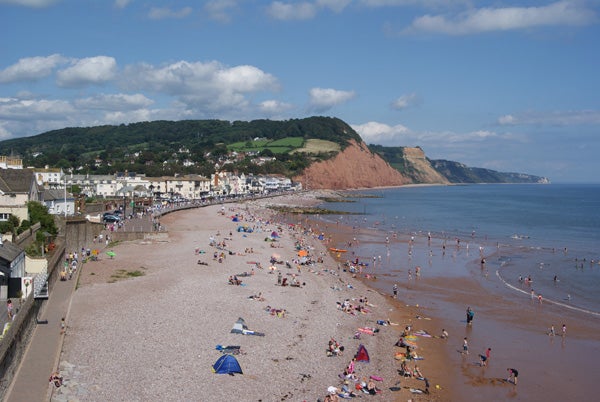 Sunny Sidmouth sea front once again provides our detail comparison shot. I really like what they’ve done with the beach. Using computer flow modelling they placed two artificial islands off the beach which have encouraged sand to be deposited, replacing the previous stony beach with some nice sand.


”The downloadable full-size image is 3.9MB, so it may take a while if you’re on a slow internet connection.” 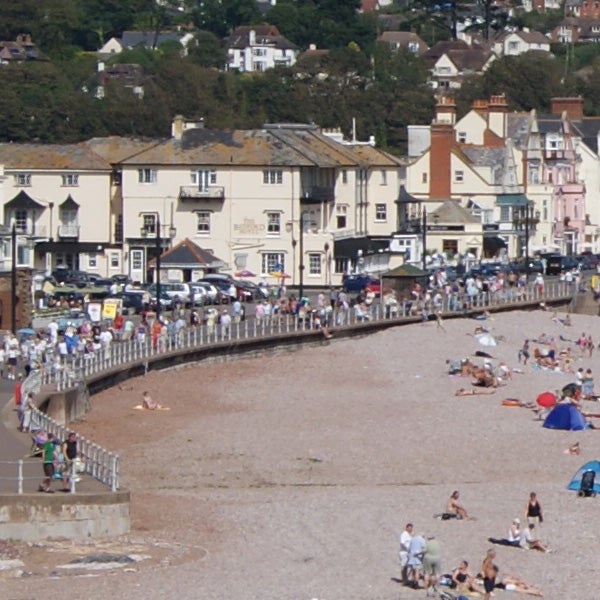 Here’s a full-res crop from the image above to compare with other similar cameras such as the Canon EOS 400D, Nikon D40x, Pentax K-m or the Sony A200. 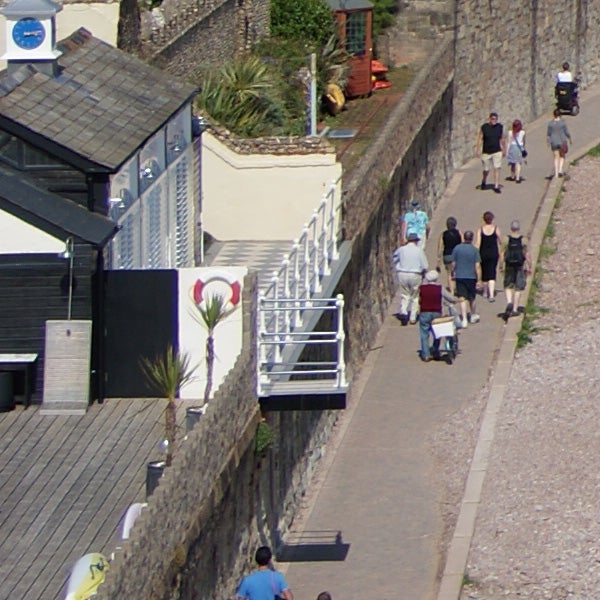 Here’s another crop from the same shot, but from the edge of the frame. This was taken using the new smaller, lighter Sony 18-55mm kit lens. 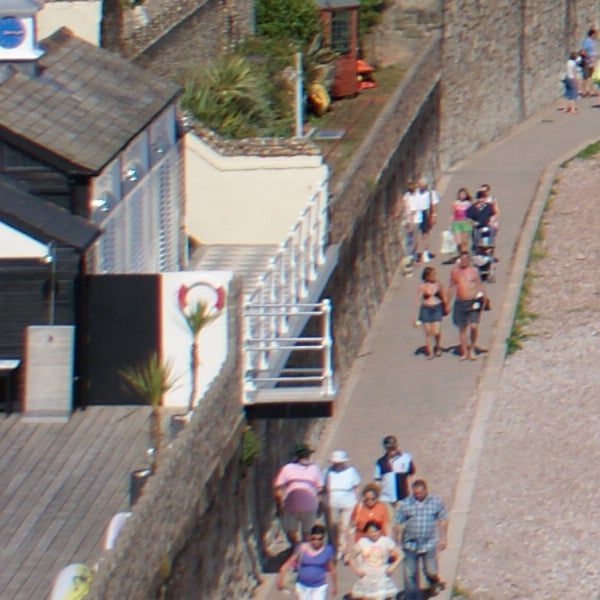 Here’s the same shot, but using the old Sony 18-70mm kit lens. As you can see it has a lot of edge blurring and some chromatic aberration. 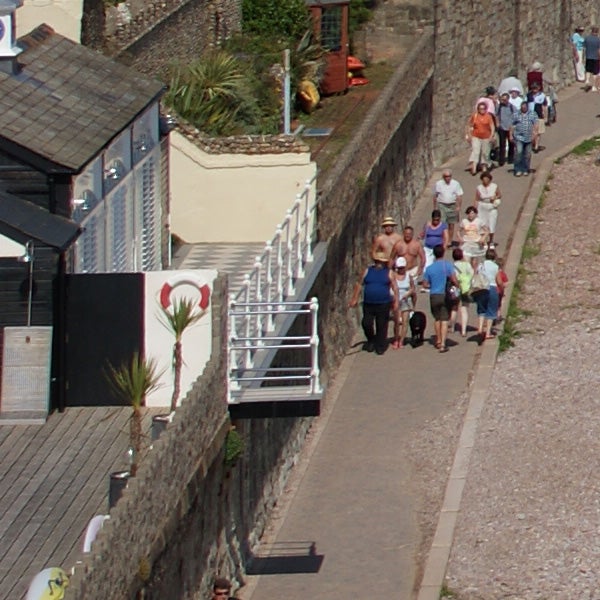 For comparison here’s the same shot but taken with the Carl Zeiss T* 16-80mm, which costs over £500. 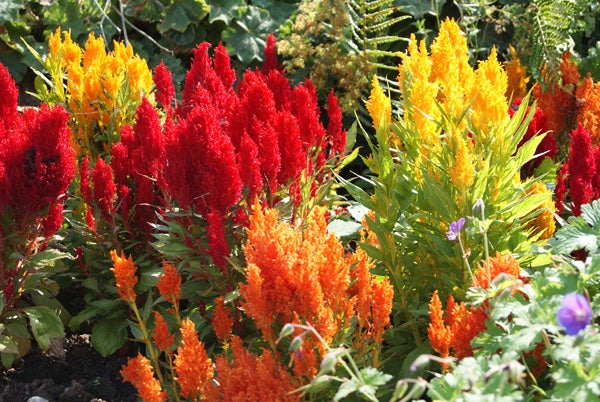 In good light the A330 produces very nice results, with rich well-saturated colour. 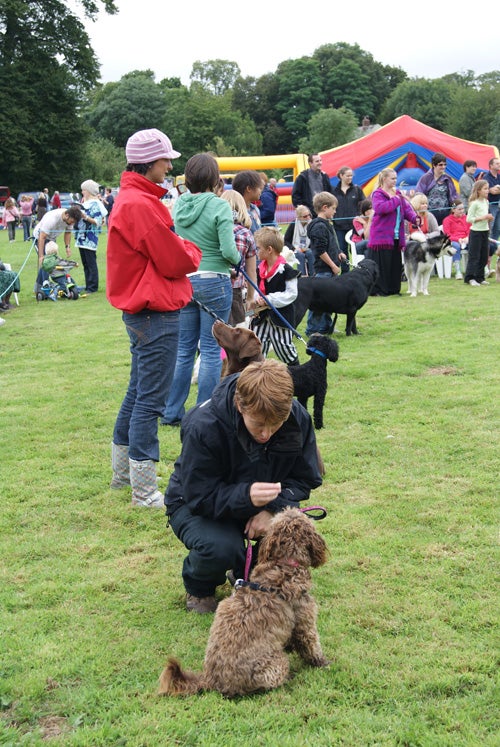 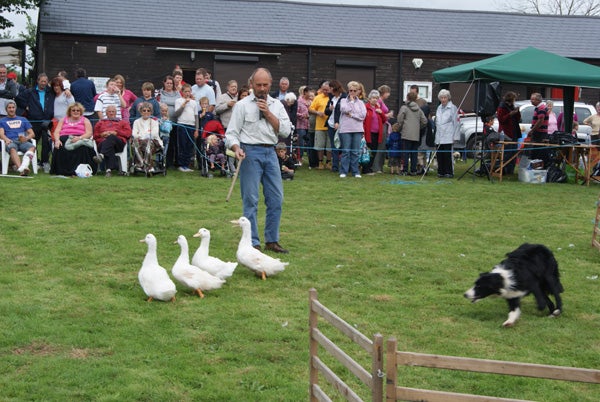 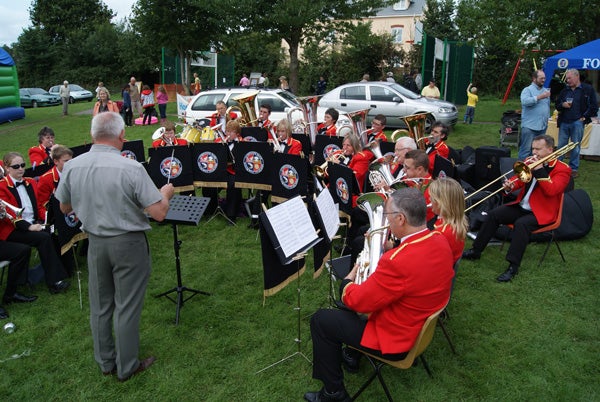 The tilting monitor is good for high-angle shots, such as holding the camera over the heads of a heaving concert crowd. 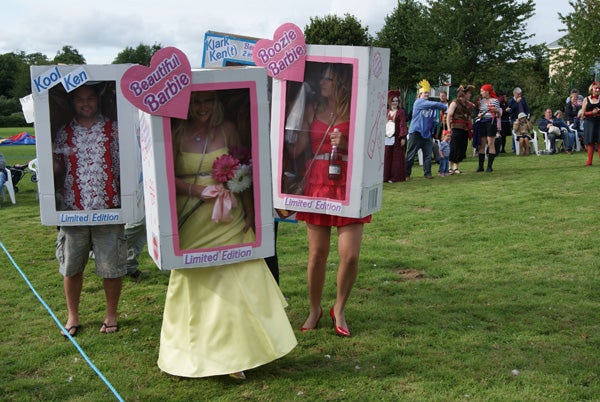 I spent ten minutes trying to think of a caption for this one. I’ve got nothing. 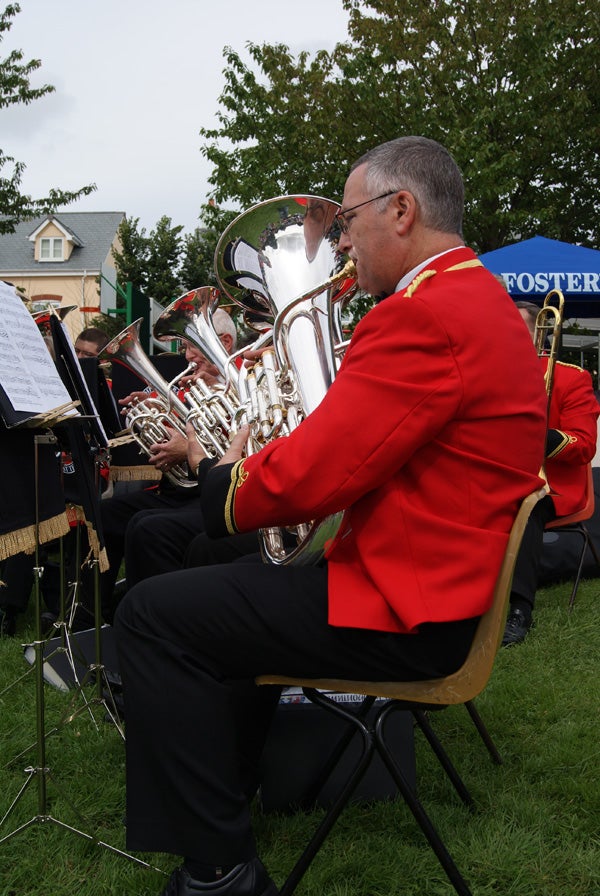