Sony’s professional grade A99 II is an update to 2012’s A99. It features a full-frame sensor and an atypical translucent mirror that doesn’t move.

The mirror facilitates faster shooting speeds and, as a result, Sony is aiming this camera fairly squarely at sports and action photographers.

You get all of this in a body which is a couple of grand cheaper than Nikon or Canon’s equivalent top-end models, making it a compelling choice for pro-photographers on a budget. 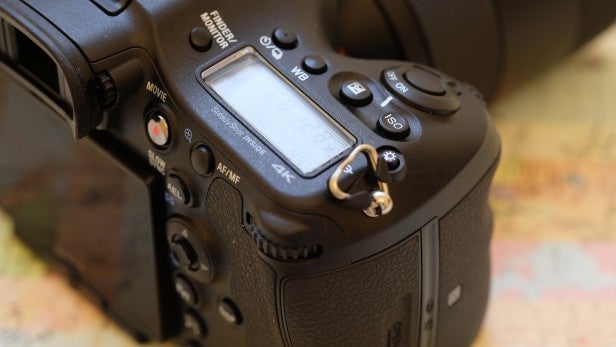 Sony A99 II – Design and Handling

Despite cramming it full of new features, Sony has managed to shrink its size by 8%, compared to the original A99. With that said, it’s still a fairly chunky camera.

It has a large, moulded grip with a textured coating, which feels comfortable in the hand. I’ve been using it with both a 24-70mm lens and 85mm f/1.4 lens it’s definitely heavy to hold with prolonged use, but this is true of all full-frame cameras.

On the top of the camera you’ll see a window which displays certain key settings, handy for quickly knowing how you’ve set up the camera. This is particularly useful in darker conditions, as you can illuminate the window via a button also found on top of the A99 II.

A number of other direct-access buttons can also be found across the top plate, including controls to change ISO, drive mode, exposure compensation and white balance. It’s clear from the number of buttons and dials that the A99 II is intended for a top-end audience.

On the rear of the camera you’ll find even more controls. A joystick, which you can use to set the AF point, is particularly useful. 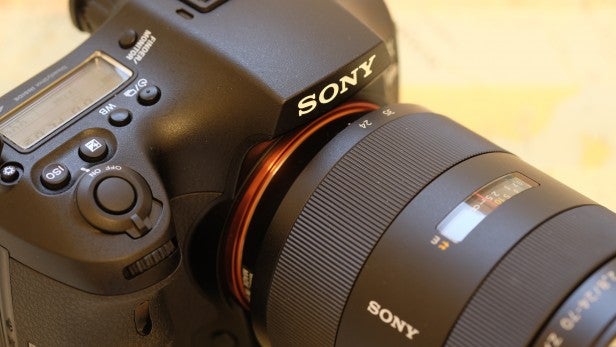 On the front of the camera, near the lens mount, is a button and dial setup that you can use to change certain functions of the camera. It’s customisable and is something that videographers will appreciate as, if setup correctly, you can use it to work completely silently when recording video.

A dial on the top of the camera has different functions depending on the mode you’re using the camera in. For example, if working in aperture priority, you can use it to set the aperture.

Although Sony has reworked its menu system to be more sensibly arranged, it’s still quite a complicated setup that you’ll probably need to spend some time figuring out.

Sony A99 II – Screen and Viewfinder

Because of the A99 II’s translucent mirror design, it is essentially always shooting in live view. This means that you can see what you’re photographing on the screen at all times.

Sadly, Sony, for unknown reasons, remains reticent to include touchscreen technology on all of its models. It has recently introduced a touch sensitive screen for the A6500 but with the A99 II you’ll have to make do without, which is a shame as it would have been very useful for things like quickly setting autofocus points.

That said, using the joystick in conjunction with the viewfinder is a good experience. It’s placed within easy reach of your thumb and since it protrudes from the body, it’s easy to locate and use. 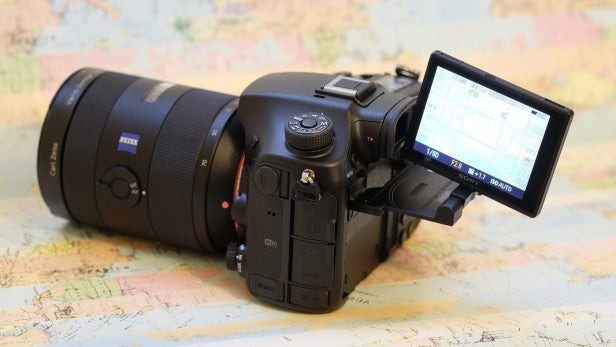 The screen is a slightly odd looking beast, but that works well to provide flexibility of viewing angles. Unlike most full-frame cameras currently on the market, Sony acknowledges that having a fixed screen can sometimes prove awkward when you’re photographing from less straightforward positions. The one on the A99 II can move to the side, down, and even face completely forward –  ideal in many situations, including for selfies. Videographers are also likely to find this useful.

Using an electronic viewfinder simply isn’t to everybody’s tastes – and you’ll find many pro shooters shudder at the thought. But the large, bright, high-resolution viewfinder on the A99 II provides a great view of the scene and thanks to improvements in the technology, it displays hardly any lag when you’re moving the camera from side to side.