Although it’s a shame the Sony KD-48A9 doesn’t carry the same up-to-the-minute gaming features some other cheaper models in Sony’s TV range do, its picture quality from an AV fan perspective is nothing short of exquisite

The A9 OLED (KD-48A9) is Sony’s first ever 48-inch OLED TV, enabling the brand’s OLED technology to find its way into smaller rooms, alcoves, second rooms and, potentially, gaming rooms it hasn’t been able to access before.

Does the 48A9’s OLED technology and native 4K resolution still have as much impact at this smaller screen size, though? Also, since at the time of review (January 2021) the 48A9 costs £220 more than LG’s rival 48-inch OLED model, the OLED48CX. Can it justify the extra outlay?

The Sony A9 OLED is a gorgeous ‘little’ thing. The main, ultra-thin screen and the chunkier section that covers an inner half or so of the screen’s rear both enjoy a premium finish. The frame around the screen is extremely narrow, too, and sits flush with the screen so that the whole thing looks like it’s been hewn from a single sheet of glass.

The screen sits right down on its almost flat aluminium desktop stand, completing a design that’s clearly hell bent on providing as little distraction as possible from the pictures you’re watching.

Contributing to the 48A9’s remarkably slim bezel is the fact that it doesn’t carry any conventional speakers. Instead, as I’ll discuss in more detail later, its screen actually produces its sound, courtesy of Sony’s Acoustic Surface technology. 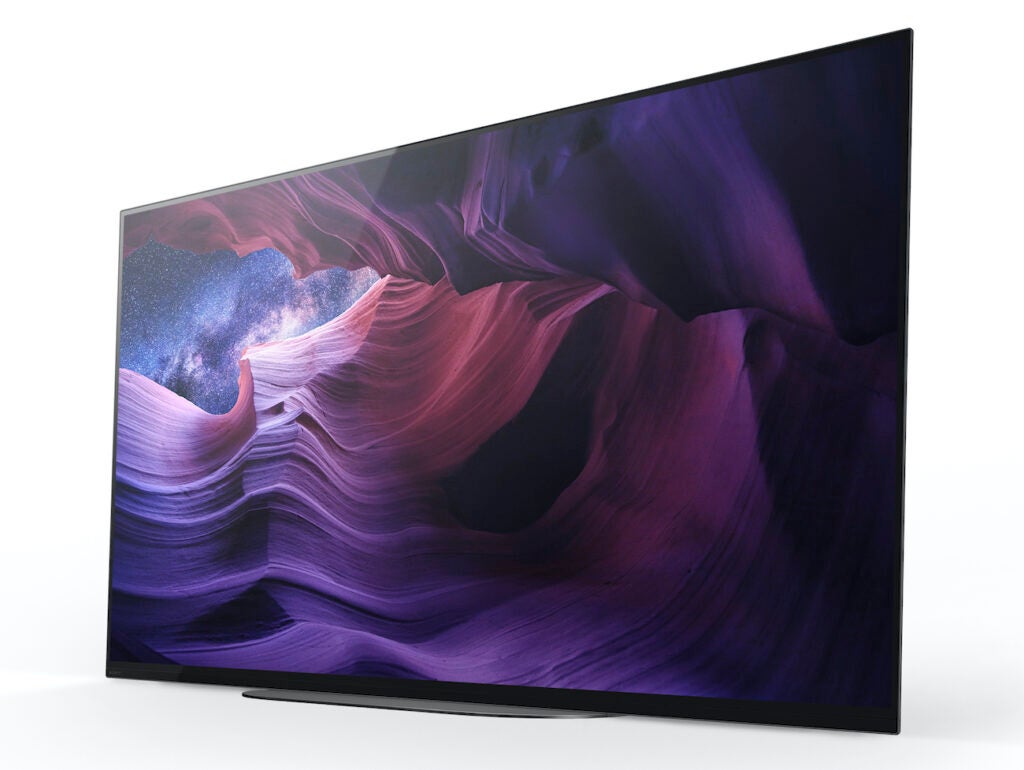 The set is partnered with a nice premium remote control, complete with a metallic finish and a much better layout and much more tactile buttons than we used to get frustrated with on Sony remotes of old.

The simple fact that the 48A9 is a 48-inch screen with a full 4K pixel count is the lead story here, given how many years 55-inch screens have been our smallest OLED options. It turns out there’s plenty more to talk about too, though.

Picture processing is provided by Sony’s X1 Ultimate processor. This hasn’t changed from 2019’s system; we won’t see new Sony processors until the brand’s 2021 TVs arrive later in the year, with their Bravia XR engines. That’s not to say X1 Ultimate is in any way a slouch by today’s TV standards, though.

Its dual-database image comparison system, for instance, has repeatedly delivered class-leading upscaling of sub-4K sources. Its Motionflow processor has typically delivered class-leading motion handling. That’s bolstered here, too, by an X-Motion Clarity system that can inject partial black frames to deliver a more cinematic feel to 24fps films without causing the image to dim significantly like regular black frame insertion systems do.

Sony’s HDR Remaster system for converting standard dynamic range images to HDR is also arguably the most all-round most natural such system in the current TV world. So much so that I actually don’t mind that Sony applies it by default on many of its picture presets. 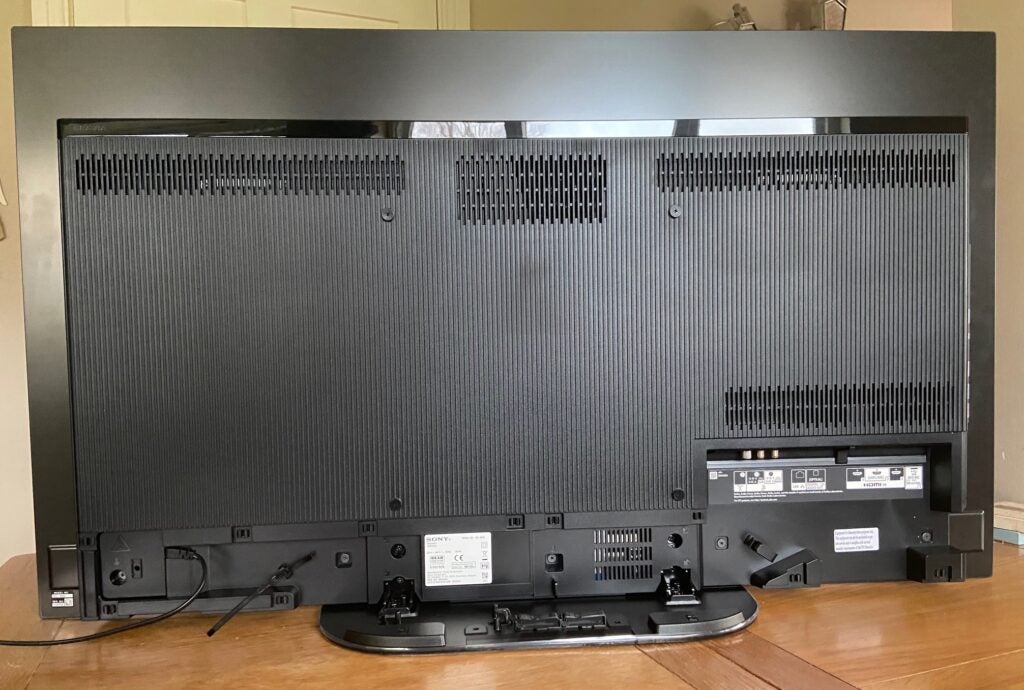 Then there’s Sony’s Pixel Contrast Booster, which analyses the picture and manages power management down to pixel level to deliver enhanced contrast and better shadow detailing.

All of these features, though, are also available on Sony’s ‘step down’ A8 OLEDs, though. So aside from being the only 48-inch model across Sony’s current OLED range, the only real picture difference between the 48A9 and the A8s is the A9’s use of a Master Series OLED panel. This signifies that the panel has been individually tuned in the factory before shipping.

The Acoustic Surface technology mentioned earlier, meanwhile, produces the TV’s sound by using actuators to vibrate the screen. This innovative approach means audio is expressed forward into the room, for a more direct, impactful and immersive experience. The only ‘conventional’ speaker in the 48A9 is a decent-sized bass driver that fires out of the screen’s rear.

The Sony A9 OLED’s smart features are provided by Android TV. I’m still not a fan of Android’s full-screen home menu, and the rather cluttered, overwhelming feel it brings with it. It runs much more stably and slickly on the 48A9 than older iterations, though, and offers a huge amount of content and apps – including Netflix, Prime Video, YouTube, Disney+, Google Play Store, and Apple TV.

Sony has also partnered with YouView to cover the catch-up services for all the key UK terrestrial broadcasters not separately provided within Android TV. 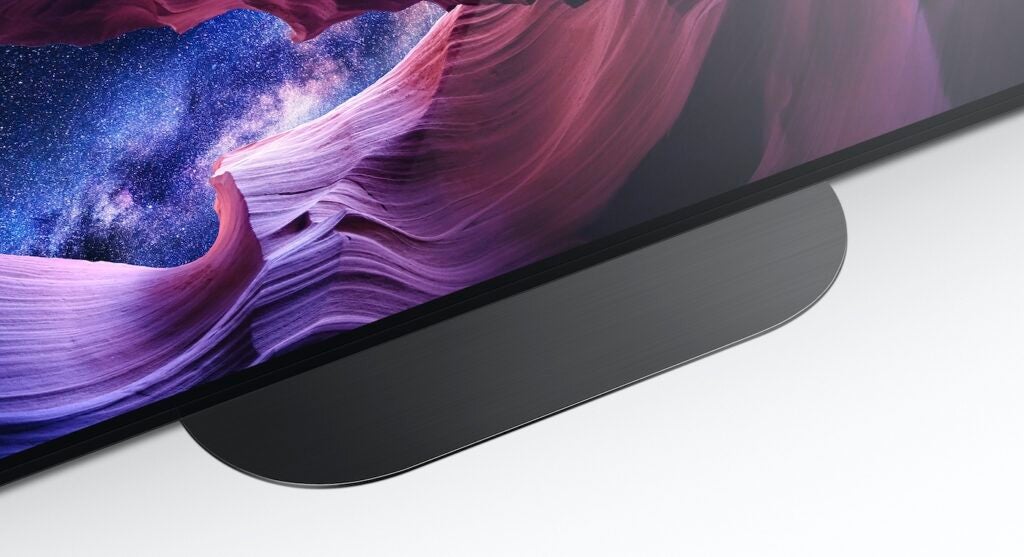 The 48A9’s connections, finally, introduce a disappointment: no support for the key trio of 4K/120Hz, variable refresh rate (VRR) and automatic low latency mode (ALLM) switching features available on the latest consoles and PCs. This feels particularly unfortunate given how well suited the 48-inch screen size is to gaming. And given that these features will eventually (via firmware updates) be supported on Sony’s mid-range XH90 LCD models.

For serious gamers, this puts the Sony A9 OLED at a serious disadvantage against LG’s 48CX, which supports 4K/120Hz, VRR and ALLM across all four of its HDMI ports. Let’s hope, then, that the 48A9 has the performance quality to make up for it.

The Sony A9 OLED’s pictures fire on so many cylinders, happily, that it’s hard to actually home in on what makes them look so special.

Black levels are a good place to start, though. They go effortlessly and consistently dark when required, with no sign of the occasional instability that can appear on LG’s OLED sets with very dark scenes. The 48A9’s greyscale management and light gradation from this pitch black start point is fantastic, too, leading to arguably the most extensive and natural looking shadow detail reproduction I’ve seen on any consumer screen.

The sense of subtlety isn’t just restricted to dark scenes, either. Colour reproduction is also – for the most part – exceptionally refined, in terms of the range, balance and finesse of the tones the screen can reproduce.

The screen’s deft light touch holds good, too, throughout the image’s brightness range, delivering a stunning combination of contrast, three-dimensionality and texture with every type of content that helps images look flat-out beautiful for much of the time. Especially if you’re feeding the TV a good quality 4K HDR image.

If that HDR image is mastered in Dolby Vision the beauty ratchets up even more, as DV’s extra scene-by-scene image data helps the screen get even more value from its startlingly effective Pixel Contrast Booster technology. 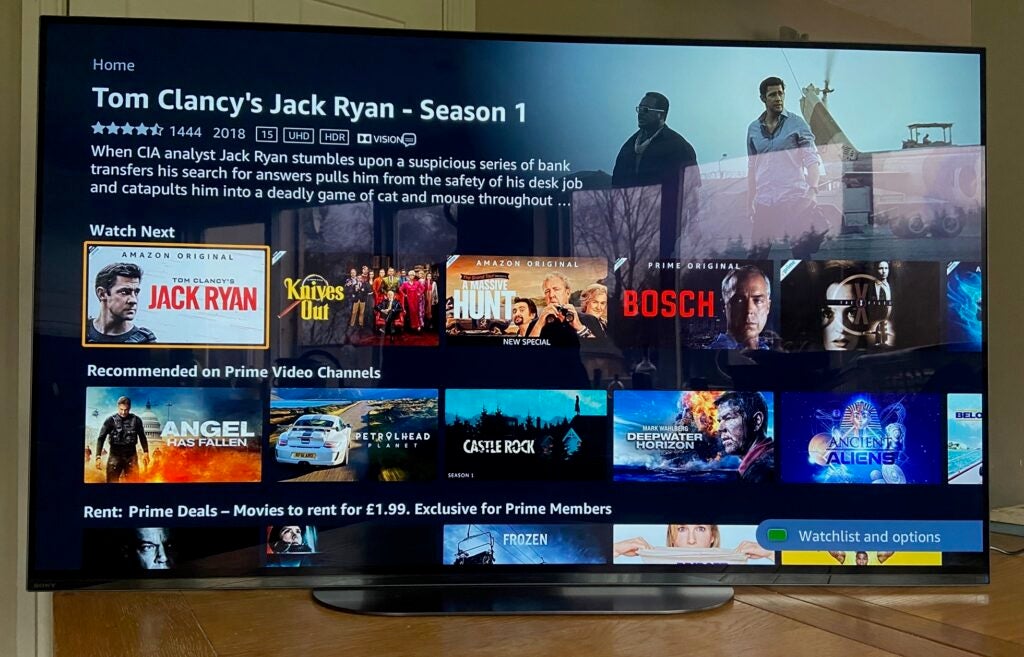 The Sony A9 OLED infuses HDR images, too, with light peaks that extend the sense of dynamic range beyond anything witnessed on previous Sony OLED generations. This, in conjunction with the stellar black levels and local light controls, gives HDR images a lovely intensity and immersive, pixel-level purity that many AV fans will consider a more than adequate compensation for OLED technology not hitting the same brightness levels premium LCD TVs can.

Detailing and sharpness feel perfectly judged, leaving you in no doubt that you’re watching 4K despite the screen’s relatively small size. At the same time, though, there’s no over-sharpening of the image to the point where the picture might start to look noisy or unnatural.

The clarity is retained during camera pans and action scenes by Sony’s latest motion options – without, again, the clarity being accompanied by distracting side effects. Some other brands have improved the motion handling in their current TV ranges, too, but for me Sony still leads the way.

While the 48A9 has all the colour, light and motion precision it needs (and then some) to get great value out of native 4K images, it’s also brilliant at upscaling HD to 4K. The X1 Ultimate processor adds detail and pixel density while simultaneously suppressing noise, as well as adding an almost three-dimensional feel to upscaled images thanks to the way it’s able to apply its upscaling results in different ways to different parts of the picture.

Add to all these strengths OLED’s usual pretty much infinite viewing angle support, and you’ve got a picture that looks routinely gorgeous from every angle.

There are a trio of minor picture niggles. First, the Sony A9 OLED’s pictures aren’t as bright as those of rival OLED sets. In standard mode it tops out at around 665 nits, which drops to 588 nits for the Cinema preset, and 614 nits for the Game mode. LG’s OLED48CX, by comparison, tops out at nearly 800 nits. While you do feel this difference in bright HDR shots, though, the extreme precision and consistency of Sony’s light control and contrast means that with the vast majority of content the 48A9’s pictures look more intense than their brightness measurements would suggest. 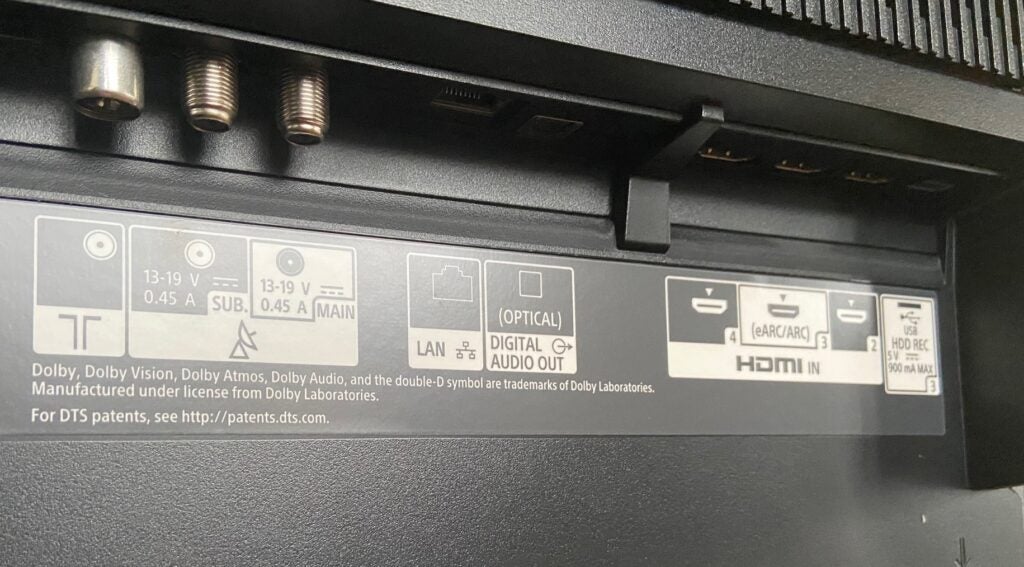 There’s very occasional colour banding in finely blended HDR colour shades, despite the generally positive efforts of a Super Bit Mapping feature expressly designed to tackle this issue. Finally, as with most of Sony’s current TVs, the profile of Dolby Vision the 48A9 uses doesn’t seem to yield quite such effective, dynamic results as the Dolby Vision profile other TV brands use.

These really are minor niggles, though, in the context of a picture performance that’s typically nothing short of beautiful.

The Sony A9 OLED’s innovative Acoustic Surface audio system, meanwhile, lives up to its promise of pushing forward into the room, putting you in the midst of the action and helping even the densest mixes sound clean, detailed and dynamic. It’s amazing how rounded the sound is considering it’s being chiefly generated by vibrating the TV’s flat screen.

The rear-firing bass driver sounds a little lightweight and muffled compared with the open feel of the main ‘screen’ speaker, and the set doesn’t cast its sound high and wide enough to do much justice to the Dolby Atmos soundtracks the set is capable of decoding. But overall the sound is undeniably impressive – especially considering the compact form of the TV it’s coming from. 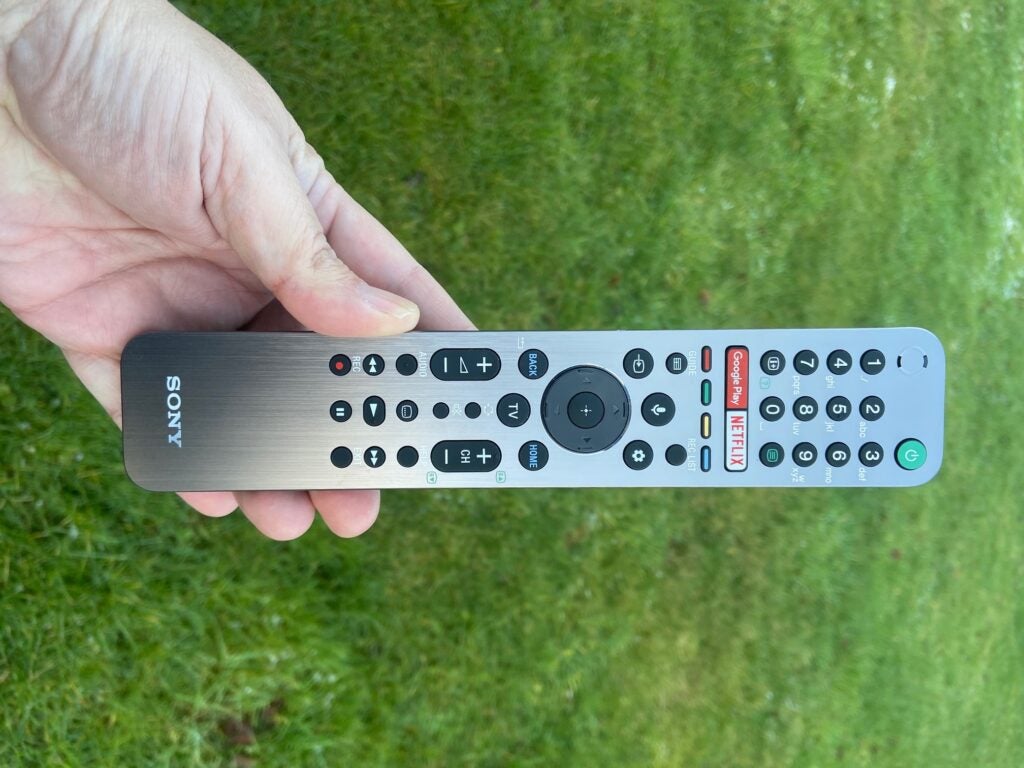 For ‘next-gen’ gamers who have or intend to get a PS5, Xbox Series X and/or cutting-edge PC graphics card, the Sony A9 OLED’s lack of VRR, 4K/120Hz and ALLM support may be tough to take. Especially when there’s a significantly cheaper 48-inch OLED rival that CAN handle all of those things.

It’s worth noting too, that unless you need the 48-inch screen size, you can currently get Sony’s similarly specified (except that it doesn’t get a Master Series tuned panel) 55-inch KD-55A8 OLED TV for just £1,300.

If its 48-inch screen works for you, though, then 48A9’s impressive sound and flat-out beautiful picture quality can be filed under irresistible.