Although it’s not the most premium model on Sony’s CES 2015 stand, the 65-inch 4K 65X9005C seems to be the TV the Japanese brand most wants to shout about.

As soon as you approach Sony’s booth you’re presented with a huge line of these striking sets standing edge to edge, while another couple of models spin endlessly round on turntables in front.

As you might guess from this bold display, the main feature of the 65X9005C is that it looks a million dollars. In fact, its design is not only its killer feature but also a record breaker, as it delivers the slimmest body ever seen on an LCD TV.

Its chassis is just 4.7mm deep for the whole top two-thirds of its design. And although the set juts out further over the bottom third to accommodate cooling systems, speakers, tuners and the like, even here it’s still way slimmer than most other LCD TVs. The bottom line is that the 65X9005C looks more like an OLED TV rather than an LCD TV. And it looks drop-dead gorgeous in the process. 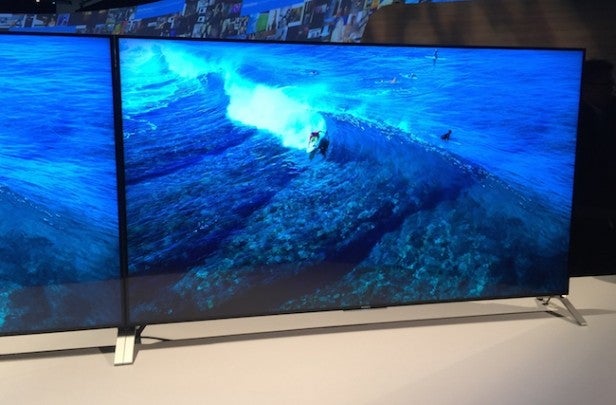 Sony has had to come up with a number of innovations to make such extreme slimness possible. For starters, the attractive and robust bodywork used to make the screens feel sturdy despite their slimness is created by externalising the bonding system that holds together all the layers that go into creating an LCD screen. This bonding system would normally be tucked underneath an outer skin.

Next, in order to retain the super-slim feel of the set even when hung from a wall, with the deeper section resting flush against the brickwork, Sony has had to develop a new vertical cooling system that takes in air at the bottom and ports it out through the deeper section’s top edge.

Of course, trying to connect your sources to such a skinny TV sitting so flush to your wall could be hideously fiddly. But Sony’s engineers have got your back here, too, thanks to a clever curved bar wall mount system that lets you pull the TV’s bottom edge away from the wall to access the connection ports.

If you decide you’d rather stand the 65X9005C on a tabletop, the simple legs that support the screen can be mounted either at the extreme edges of the screen or set more towards the centre if your table doesn’t happen to be as wide as the screen. 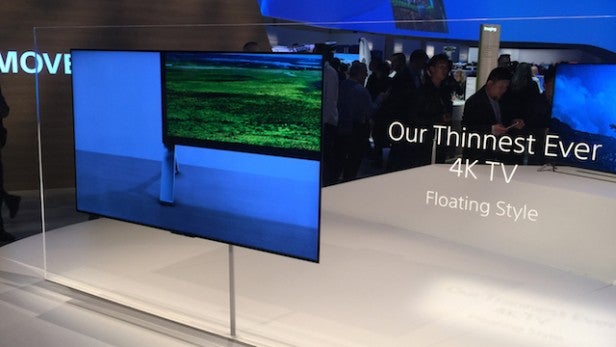 In short, the 65X9005C is a marvel of design – and it delivers an emphatic two fingers up to those who’ve moaned in recent years about Sony TVs tending to be bulkier than most.

While there were limits to what we were able to judge about the 65X9005C’s pictures at Sony’s booth, the continually bright, colourful 4K/UHD sequences from some sort of beach and sea sport paradise all looked uniformly spectacular. Colours were blisteringly intense thanks to a combination of Sony’s Triluminos system and a greater brightness output than we might have expected from such a skinny TV. The 4K detailing looked stunning, letting us feel like we could see every ripple of every wave, or every grain of sand.

Motion was well handled, too, so that even the sports footage remained crisp and distinctly ‘4K’, and we were relieved to see that viewing angles seemed more forgiving than those of some previous Sony TV generations.

Sadly we weren’t able to watch any darker content on the 65X9005Cs or hear any audio from them – two areas where the set’s exceptional slimness could potentially cause headaches. If the 65X9005C turns out to be decent in these two key areas, though, Sony could have a bona fide hit on its hands when these TVs go on sale in the spring.