Big Screen Impact Without The Inconvenience

While pretty much anyone would love to be able to watch truly cinema-sized pictures in their homes, most homes just can’t accommodate either immense TVs or normal front projection systems. The TVs would fill your walls with a huge and depressing expanse of blackness when they were switched off, while normal front projectors usually require you to black out your room – solutions which are hardly compatible with every day life.

Cue the ever so slightly bonkers – but in a supremely good way – Sony 4K Ultra Short Throw Projector. This incredible projector is capable of producing immense images while sat mere centimetres from your wall; for instance, you can easily get a 100-inch image from just a 40cm throw distance. And for our demo at this year’s IFA show we got to watch a 145-inch image delivered from a projection distance that still looked to be below half a metre.

As if this physics-defying headline trick wasn’t already cool enough, a combination of a high 2000 Lumens maximum light output and a laser projection engine enables Sony’s Ultra Short Throw Projector to deliver images punchy enough to be watchable in ambient light. Well, direct sunshine might prove a stretch, but you certainly don’t need the total blackness required by typical projector installations, which have to drive their light across much more of your room. 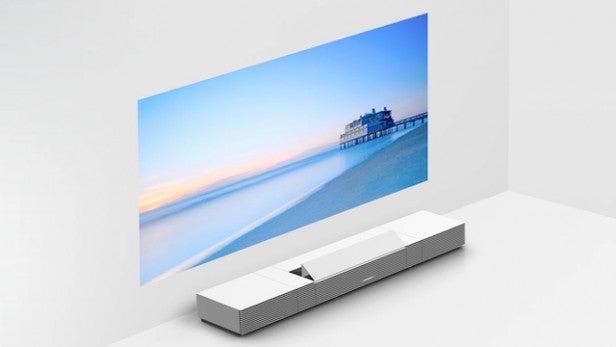 There’s another key advantage of using a laser light engine too: namely that the projector should deliver 20,000 hours of viewing without suffering any significant brightness decrease.

The laser system further makes it possible to power Sony’s new projector up and down almost instantly, with no need to wait for lamps to cool down – very handy for a product with such a lifestyle emphasis.

In terms of design, the Sony 4K Ultra Short Throw Projector is unlike any projector before. It’s actually housed towards the centre of a really long, low, white piece of designer furniture. The projector section even folds down when you’re not using it so that you’re essentially left with an extended sideboard. Naturally the projector mechanism is motorised, so the projector automatically pops back up and out when you switch it on.

The space inside either end of the ‘sideboard’ can be used for hiding video sources, while a small section immediately to the left of the projector holds a 40W speaker so you can enjoy sound with your images without having to set up a separate audio system.

Our demo of the 4K Ultra Short Throw projector in action – in a mixture of ambient light levels – chiefly comprised three types of footage: some stock 4K demo footage of nature and wildlife, clips from Spider-Man 2, and some ultra high resolution stills of artworks from the Louvre – the latter included to make the point that you could use the projector to reproduce paintings and photos on your wall when you’re not watching TV shows or movies.

The nature and movie footage looked for the most part much better than it has any right to from a projector doing the sort of crazy lifetsyle things the 4K Ultra Short Throw projector is doing.

The sharpness of the projectors 4K images also speaks volumes about the quality of the optical array Sony has put together in order to achieve its ultra-short throw goal. If there were any cheap or failing optics and lenses in the light path they would certainly have degraded the sense of 4K detail. 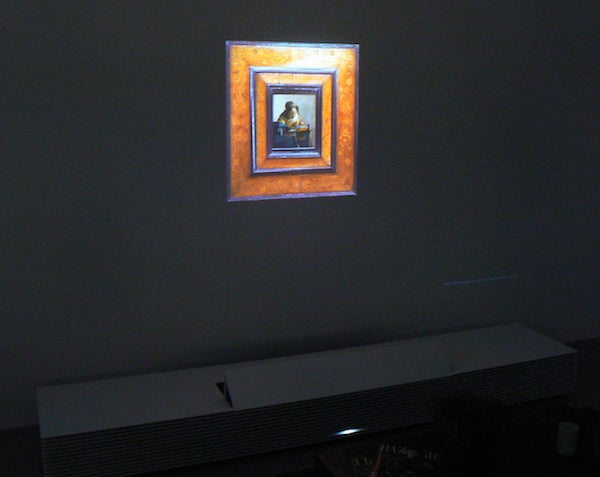 The image remains sharp right to its corners too, which again is quite a feat with such a short-throw machine, while brightness levels are good enough to satisfy in even quite a lot of ambient light. Though inevitably we’d recommend darkening your environment as much a possible for the best results.

One other plus point is that images didn’t appear to suffer with the sort of shimmering sparkles and clipped (hollowed out) bright areas sometimes seen with laser technology; instead you get a pleasingly even, balanced image that’s easy to engage with.

We did spot a couple of niggles. First, the top edge of our demo image was ever so slightly arced rather than being perfectly straight. There was also a little more blurring over motion than we saw with Sony’s sensational new VW300ES ‘standard’ 4K projector. Also, while the projector is uniquely talented as a ‘lifestyle’ option, its performance isn’t quite as cinematic as that of a really top-end dedicated home cinema projector.

But that’s kind of beside the point. The Sony 4K Ultra Short Throw projector is on a mission to bring big-screen experiences to places where they otherwise couldn’t go, and in that respect there’s nothing else like it.

You might need to do a bit of saving up ahead of the 4K Ultra Short Throw projector’s European launch next summer, though. For while a European price for Sony’s unique projector solution is yet to be confirmed, the US version costs the small matter of $50,000.

Next, check out our pick of the Best Projectors you can currently buy.