The most noticeable thing about 3D at the 2012 CES was its absence. Samsung hardly bothered with it at all, while for many other brands it only got secondary billing to their new Smart TV functionality. Only LG really went a bundle on it.

With this in mind, it was no great surprise to find most brands completely ignoring glasses-free 3D technology. The only two serious exceptions were Toshiba, which still reckons its going to launch a glasses-free 3D model by April, and Sony.

Sony had two glasses-free 3D screens tucked away in the same Future Zone corner of its stand where we found its previously discussed CLED TV: a 15in model, and a much more eye-catching 46in model. Naturally it’s the larger of these models we spent the most time with. 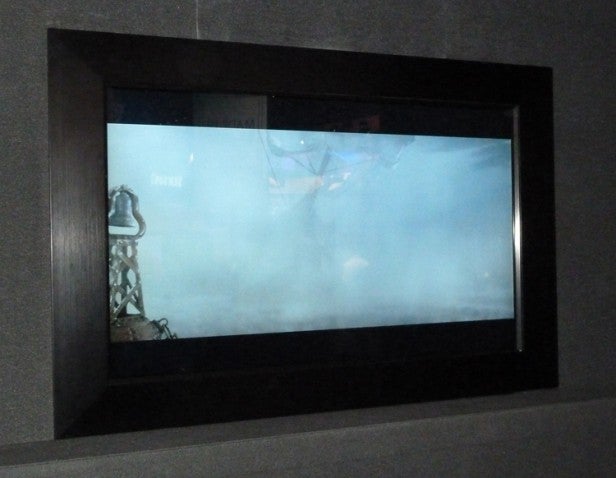 The first thing that struck us about this demo unit was that, unlike the booth for Toshiba’s glasses-free 3D model, there were no ‘footprints’ painted on the floor in front of Sony’s screen showing you ideal standing positions. This suggested that either Sony was just being more careless than Toshiba or, hopefully, that Sony’s glasses-free technology wasn’t as dependent on viewing position as Toshiba’s.

Happily the latter possibility seemed to apply. For watching Sony’s effort from a variety of different positions and angles suggested that it’s actually more flexible where viewing angle is concerned – despite only being a prototype – than Toshiba’s soon-to-be-launched option. A few of the relatively wide angles we tried lost a degree of focus on the far side of the image, but overall we were pleasantly surprised by how the Sony handled this thorny glasses-free issue.

The Sony screen also handles the glasses-free problem of ‘seams’ in the picture rather well. The need to try and cater for multiple viewing angles with the lenticular lenses on the front of the screen commonly means that if you move your head even a few inches while watching 3D, you can see an obvious line in the image where you move from one catered-for viewing angle to another. But while you can certainly see some evidence of these viewing angle shifts if you move your head much, their appearance is relatively low-level.

More good news about the Sony’s glasses-free 3D images concerns their sharpness. For unlike the rather soft, mushy look still exhibited by Toshiba’s glasses-free model, the 3D Blu-ray image being shown on Sony’s set actually looked HD, with decent levels of clarity and purity, even when there’s motion in the image. It’s worth adding here that like Toshiba’s ZL2 glasses-free 3D TV, the Sony model also employs a 4k native resolution.

Also impressive is how ‘invisible’ the screen’s necessary filters are. By which we mean that you can hardly see signs of their structure at all, unlike the line and ‘diamond’ structure still visible over pictures on Toshiba’s screen. To be fair to Toshiba, though, this may have something to do with the Sony screen only being 46in while Toshiba’s is 55in. 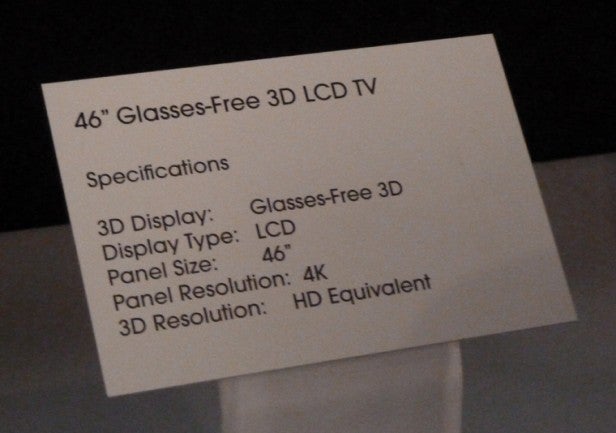 There’s still clearly work for Sony to do. The ‘seaming’ is still annoying despite being reduced, and there’s less of a sense of depth to the 3D image than we’re accustomed to seeing with glasses-based TVs. Furthermore, the fact that the world already seems to be moving past 3D raises real questions about whether Sony will ever release a glasses-free 3D TV for consumer use.

This doesn’t stop Sony’s clear advances with glasses-free 3D technology from grabbing our attention, though. Especially as, ironically, even though Sony still won’t put a potential release date on its glasses-free 3D screen, the efforts of its 46in prototype were still quite a bit more watchable than those of Toshiba’s supposedly about-to-go-on-sale ZL2…