Note: At the time of the review, the Sonos Play:3 was available for £259, but post-Brexit pricing has nudged it up to around £299 in most stores.

The Play:3 is Sonos’s smallest and most affordable speaker unit, housing three speaker units. For years now, Sonos has been known as an expensive, high-quality streaming solution. But since it has dropped the expensive bit, has quality dropped off too? Not in the slightest.

Sonos’s speaker units are traditionally thought of as multi-room devices, but the Play:3 can happily replace an iPod dock for many. Using a home Wi-Fi connection, it’ll stream your music collection from a NAS drive or computer, or the millions of tracks available from online services like Spotify. Physical media is on the way out, and the Sonos Play:3 is busily hammering nails into its coffin in preparation. 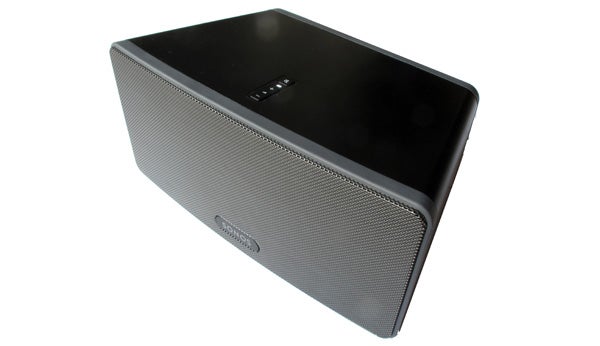 The Sonos Play:3 is an unassuming little box. 26cm wide and 16cm deep, it’s small enough to fit on a bedside cabinet without poking over the edge. If that foot print is still too large for your liking, this box is also designed to function just fine on its side, making it just 13cm wide. There are little rubber feet on one side as well as the bottom, to avoid scratches, while a built-in accelerometer lets the box know when it’s on its side, and to change the sound processing accordingly.

It may not have the bold styling of something like the TEAC Aurb SR-100i, but it sure is practical. The back and front edge are lined with a rubberised finish to give it some protection against the odd inevitable bump while the front is covered with a slightly flexible metal speaker grille. Anyone familiar with Sonos’s history will know that it’s the streaming software that’s been its raison d’etre since the beginning, but it’s nevertheless refreshing to see such “ego-free” design in action. The Play:3 wants to disappear into your living room, not assault your eyeballs every time you enter it. Unlike the (admittedly stylish) Bowers & Wilkins Zeppelin Air.

Behind the grille live three drivers – two 3in mid-range drivers and a tweeter that sits in-between this pair. Each is powered by its own digital amplifier, and there’s a bass radiator on the back. This is a passive cone – it doesn’t have its own driver – but helps to tame the low-end frequencies, improving bass performance. The back is perforated with much larger holes than the front, giving the radiator’s output free passage.

The simplicity of the Sonos Play:3’s form factor continues in its controls and sockets. It has little need for them, since it’s intended to be controlled with an iPhone, Android smartphone or a CR200 controller, and sources all its tunes over an internet connection rather than copper audio cable. It has Wi-Fi built-in, but if your connection to cables runs deep, there’s also an Ethernet port to connect directly.

Although in most ways it’s just like a shrunken-down take on the Sonos Play:5, there are a couple of key differences. The Play:3 doesn’t have an auxiliary input or a headphone output, limiting the versatility of the box a little. There are no side doors into the audio experience here – either you buy into the Sonos way or you won’t be listening to anything.

Setting-up the Sonos Play:3 is very simple, and is something you’re guided through from within the Android or iOS Sonos app – which is a free download. Using a Wi-Fi connection, you merely press one button on top of the wireless bridge, then two buttons simultaneously on the speaker to get the boxes playing on the same team. You’re then taken to the main menu in the remote control interface, although at this point you can only stream radio stations. This setup process is the same if you use the PC software rather than the iPhone/Android app.

To get the good stuff – like Spotify, Deezer and so on – you need to have signed up for a Sonos account. These extra services are available from within a “More Music” submenu, but can only be added to the main menu once you’re signed in with your Sonos user name. Getting an account is free though, and only takes a minute.

There are over 30 additional services you can plug into the Play:3 in the UK, including – Spotify, Apple Music, Last.fm, Deezer, Aupeo!, Napster, Wolfgang’s Vault, Stitcher SmartRadio and Grooveshark. This should be more than enough to satisfy most buyers..

If your music service of choice isn’t yet supported, you may need some serious patience to play the waiting game here. Sonos isn’t a new system, and now that the biggest-hitters are on-board we don’t expect to see many new services flood in all that soon. Spotify is the killer app here for our money, giving you access to over 15 million tracks – alternatives Naptser and Deezer both lag behind here. Even though you may use an iPhone to control the Play:3, you’re not effectively streaming over a mobile, meaning you’ll only need the £4.99 a month sub to get unlimited ad-free music.

The triumph of Sonos’s software is how well it integrates these online services. Each has its own discrete section within the Android/iPhone app, but you’re never more than a few clicks away from the services’ wares. The user interface is entirely bespoke – you’re not transported to a separate menu system when you leap from Spotify to Naspter. This makes the Sonos Play:3 very accessible. In some ways, the Android app is the best way to control this speaker. It lets you use the physical volume rocker of your phone to alter the sound level (not possible on iPhone/iPod Touch) and doesn’t cost you an extra penny. This is gadgety convergence at its best. 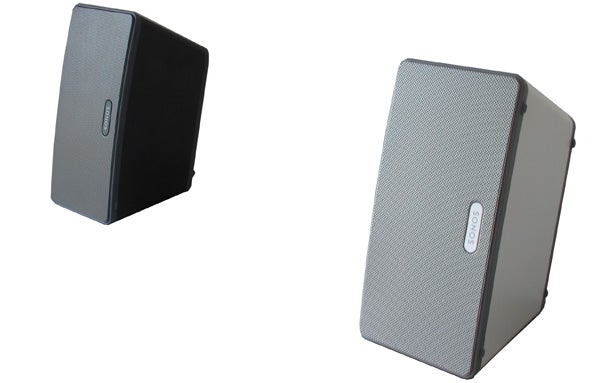 The Play:3 does demand a certain acceptance of the Sonos way. There’s no management of your music library from within the Sonos app, just streaming. While Spotify as a service lets you buy music outright, you can’t do so here. And, in a similar vein, although you can listen to podcasts all day long you can’t download them. While a Play:3 may become the heart of your music setup, you’ll still have to head back to your computer if you want to expand your MP3 collection or download some podcasts to keep.

Adding a NAS or computer-based library is simple enough, but does need a little patience. We couldn’t get the Play:3 to hook into our iTunes library directly so instead had to share a specific music directory on the hard drive – which was followed by a bout of indexing that took a good 45 minutes to process (we are talking about a 15,000-track library though). Sonos claims its software is more than happy to take on large libraries of around 65,000 tracks, and we found browsing through albums and artists wonderfully easy using the iOS app. Scrolling through the list is very quick, and you can skip to a letter of the alphabet rather than just endlessly flicking through a book’s worth of pages.

The potential downside of relying on a “real” music library rather than a cloud collection like Spotify is that the device you’re streaming from needs to be powered-up all the time. If you use a NAS box, this is hardly a problem, but we’d be less keen on keeping a computer on all day long. 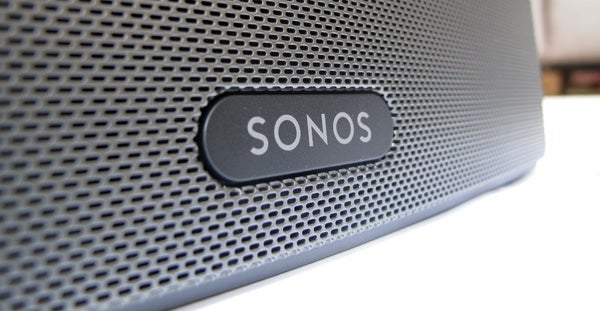 The Sonos Play:3 is ready to become more than just a lounge music player though. There’s a built-in alarm function, further boosting the box’s skills as a bedside unit. The standard alarm tone is a basic chime sound, but you can also pick a radio station or playlist. A pet hate of ours is alarm clock units that you can’t dim properly. The Sonos Play:3 doesn’t have a clock display of course, but there is a power indicator light on the top control panel. Thankfully, you can turn this off within the app.

The Sonos Play:3 uses three drivers, each with its own digital amplifier. There are two 3in mid-range speakers and a single tweeter sitting between its two bigger brothers. There’s no dedicated subwoofer, just a passive radiator on the back to help improve the bass response.

iPod docks of this size and price will often offer decent audio quality, but tend to struggle at higher volume, as we saw in the JBL On Air Airplay dock. The Sonos Play:3 performs well above the average here, supplying a genuinely surprisingly amount of well-controlled bass, even as the volume is increased to levels that would start to cause distortion in rivals. While the dual drivers do start to sound a tiny bit strained at around 80 percent volume, they cope incredibly well, far exceeding our expectations. It can handle the incredibly low-frequency blasts of dubstep music in a clear and even way, where most units of this size simply can’t. 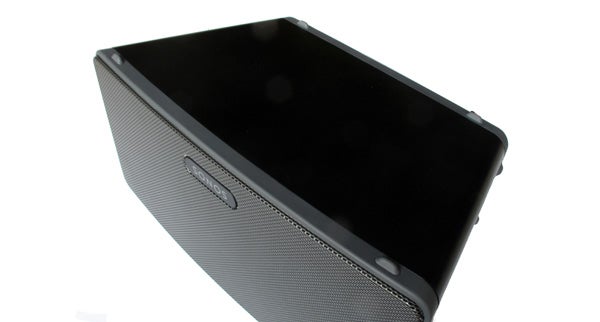 Sound is still definitely positional – the Play:3 can produce serious volume, but it’s not hard to pinpoint where the sound’s coming from compared with the larger Play:5. This ensures it can’t replace a full hi-fi on its own, but Sonos has a solution for that too.

Two Play:3 units can be paired together, each taking on one side of the stereo channel. When setup like this, bass response is further improved and the scale of output increases hugely. Use each of the devices like a bookshelf speaker in a 2.0 stereo and you have a formidable setup capable of filling rooms much better than a B&W Zeppelin Air could hope to. Of course that involves another £299 investment, but is worth considering if you want an alternative to one of the top-end £500 iPhone docks like the Zeppelin or Arcam rCube. 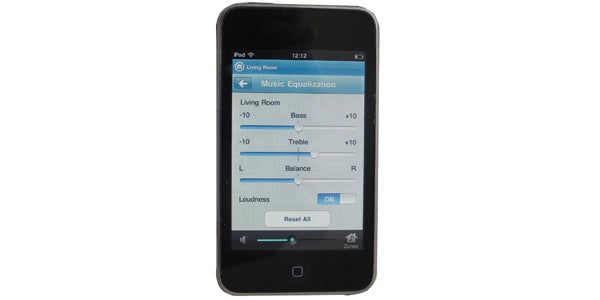 The sound signature is definitely on the warm, bassy side, but you are given some minor control over it within the iPhone app. A Music Equilization submenu lets you tweak the bass, treble and balance, and turn the Loudness mode on and off. The two frequency sliders only have a subtle effect on the sound – Sonos doesn’t give you the opportunity to ruin the sound quality here, but the Loudness option makes quite an impact. Primarily, it increases bass output to help the Play:3 maintain a decent sense of scale at higher volumes in spite of its fairly small-sized drivers. It can make the box sound a little bass-heavy, but this can then be tamed a little with the bass slider. 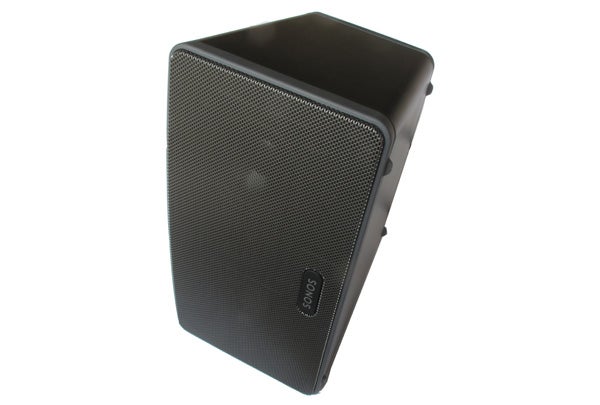 We reviewed quite a few £200-350 docks released around the same time as the Sonos Play:3, including the Teac SR-100i and JBL On Air. Although the Sonos Play:3 isn’t a dock as such, these are the kind of devices it has to compete with. And compete it does. With no distortion to be heard, plenty of power to draw on and superb software at its core, this is a brilliant box – as long as you can live without a physical dock to slap your aging iPod Classic into. The Play:5 makes a very attractive alternative at £200 more, but if you need something smaller and more affordable you can’t go wrong here.

Sonos’s brilliant streaming solutions available at an affordable price. The Play:3 sounds great, gives you access to a dazzling array of content and can be controlled completely with an Android smartphone or iPhone. Even if you have no intention of buying more than one box, that this effortlessly beats most small iPod docks in the sound department makes the Play:3 a champ.