Has there ever been a decent 3D sonic game? Certainly not in the last ten years, if ever, which makes this Sonic Wii U game all the more important. From the Dreamcast’s Sonic Adventure through to 2007’s Sonic the Hedgehog reboot, each 3D effort has either been a mild disappointment or an outright disaster, wrecked by bad controls, poorly-conceived gameplay and hugely irritating storylines. What succour there has been for the hedgehog’s fans has come from his 2D outings, with the mostly 2D Sonic Generations and Sonic Colors being Sonic’s best efforts in modern times. Well, up to now, anyway.

The good news is that Sonic: The Lost World is better than some of his previous 3D games. The bad news is that it’s still not good enough to put the blue blur back on top. Despite pinching more than a few ideas from Super Mario Galaxy it`s no match for Nintendo’s two Wii classics, or even Sony’s Ratchet and Clank series. It’s fun enough in parts to leave you thinking that this could be Sonic’s comeback vehicle, but it’s not consistently strong enough to pull it off.

We should give Sonic Team some credit for trying. Whereas recent Mario games have almost jokily put the repetition of the classic ‘Bowser kidnaps Princess’ plot in the foreground, Sonic: The Lost World still tries to work as a new story. This time Dr. Eggman (the Robotnik handle is kaput) has a plan to suck all the energy from Sonic’s world with the aid of six evil arch-fiends known as the Deadly Six. In intervening, Sonic inadvertently discovers The Lost World – a legendary, half-wrecked realm full of new levels, new creatures and new dangers – and then frees the Deadly Six from Eggman’s control. The two old foes become allies in a bid to stop the Deadly Six and save the world.

In between some of the most annoying cut-scenes ever unleashed on gamers (all mercifully skippable), Sonic can wander the hex-structured map of The Lost World, gathering bonus items and enter any unlocked zones. These run the gamut from full 3D levels to old-school 2D levels, with a handful that flit back and forth in between the two styles. Sonic has the usual abilities: a speedy run with a trigger-activated sprint, a charge-and-roll ball form and a jump that can lock onto enemies, allowing you to home in and bosh them repeatedly. He also has a nifty bounce move that can smash through some blocks of scenery, though we were a good halfway through the game before we worked this out. 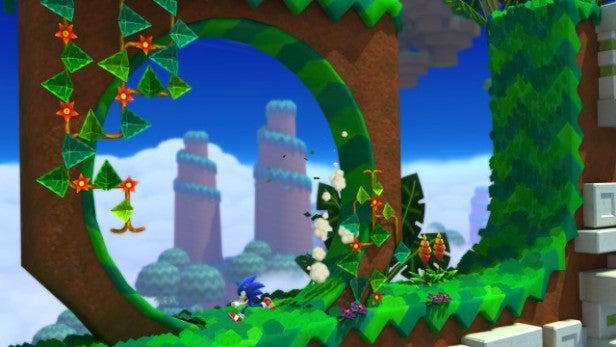 The 3D levels are more than a little reminiscent of Super Mario Galaxy. While some have Sonic racing forwards along strips of terrain or grind-rails, many feature tiny planets or lengthy platforms floating in the Ether above the Lost World, with Sonic bouncing between them using springs or rockets. The 2D sections are more traditional, but some still feature floating worlds that rotate 360 degrees as Sonic frolics around inside them, or long ribbons of scenery that Sonic dashes along on his way.

All the stereotypical platform game settings – deserts, temples, tropical islands, snowy wastes – are featured, but also a few less expected ones, with confectionary, cakes and fruit all putting in an appearance. The graphical style also seems indebted to Super Mario Galaxy. The worlds have that same over-bright, over-lit 3D quality, and Sonic, his friends and enemies wouldn’t look out of place in Nintendo’s game. Maybe a non-Olympic team-up beckons?

When Sonic: The Lost World is good it’s very good. Each section seems to have at least one storming level of the kind that reminds you of the good old days of high-speed Lava chases, Casino-themed rollercoaster worlds and green hills with loops and secret tunnels. There are some amusing bits involving fruit juice shoots, plus Super Money Ball-style zones with a rolling snowball, a brilliant pinball-themed level and a couple of classic springs, chutes and loops affairs. 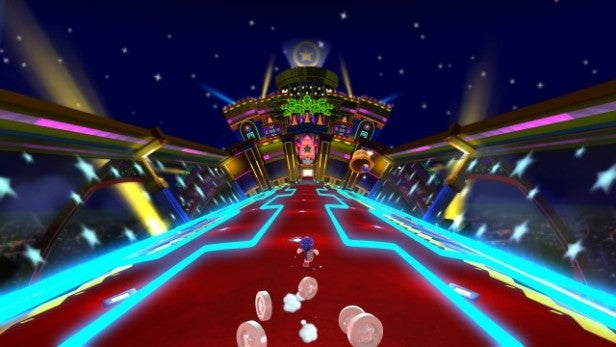 Sadly, it’s not all that good all that often, and when it’s bad it’s really annoying. If you like rushing heedlessly and semi-uncontrollably into certain doom then, boy, is this the game for you. Sudden death drops and insta-kill obstacles are littered all over the place. You’re vulnerable to certain critters while jumping and certain critters while rolling, but you often don’t find out which until they’ve killed you, inevitably at the end of an awkward stretch. The difficulty level spikes oddly, so that one of the easiest levels in the game comes right after one of the most challenging. Draconian time limits and limited lives don’t help, though Sonic lifts another Mario idea with a free pass power-up that takes you past the current section if you keep on dying.

Sonic: The Lost World also lacks Nintendo’s legendary polish, with bad camera angles, sudden shifts of camera angle and woolly controls for some actions spoiling the fun. And while it’s great to see the Wii U Pad’s touchscreen and accelerometers put to use to steer a range of rocket-powered vehicles, the controls here once again don’t feel up to the task. Sometimes Sonic: The Lost World just isn’t that much fun.

Much of the rest of the time it just isn’t quite enough fun. Few of the zones really leave much mark on the memory, and where recent Mario and Rayman games have thrown in ideas and gadgets like there might never be another game to use them in, Sonic: The Lost World only seems to have a few to spread around each area. 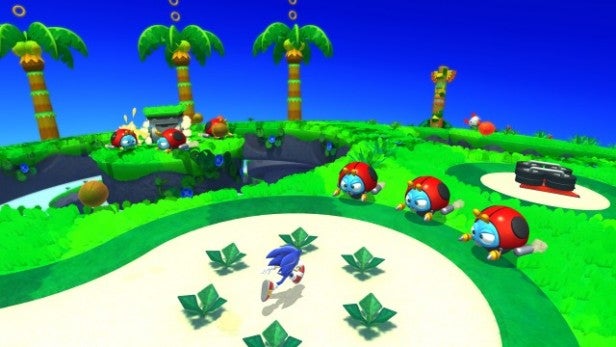 Sonic: The Lost World’s multiplayer options are equally disappointing. Play co-op, and one player controls Sonic while another controls a remote-controlled helicopter that drops bombs. Guess which feels like a total bore? There is a two-player race mode with one player on a Wii remote or Pro controller and another on the Wii U Pad, with the latter removing any need for split-screen action. It’s an improvement on co-op, but there aren’t that many courses and the ones that have been picked aren’t actually the best the game has to offer.

Sonic: The Lost World is a depressingly inconsistent ride. There are moments here where Sonic seems to be back on top form, but they’re spoilt by a mass of generic, unimaginative levels and some of the most frustrating gameplay we’ve seen in a recent platform game. It might look a little like a Super Mario Galaxy but it’s nowhere near the same league.