Ah, Sonic, I used to count myself one of your fans. You were the Dylan of video-games, the influential, freewheeling maverick who rewrote the rules and added spiky attitude to the groundwork laid by Mario. It was your early capers that pulled me away from my Amiga and back into the world of console gaming, dipping my toes back into the water with a Master System and Sonic 1, before the sight of Sonic on the Megadrive forced a rapid upgrade. The speed, the springs, the chutes, the loops and lava seemed incredible; the whole experience was practically an overload of fun. Like all fans, I followed you through Sonic 2, Sonic 3, Sonic and Knuckles, and were it not for the prohibitive expense of the Mega CD, I would have had Sonic CD too.


And just as Dylan had to go electric, so I understood that you had to go 3D. But the results weren’t great. After, Sonic R and Flickie’s Island we should have been prepared for some disappointment, but where Mario 64 was a revelation, Sonic Adventure never really gelled. The action stages were short and stupidly linear, the adventure sections plain dishwater dull. And from there things only got worse. Sonic Adventure 2 was fine while you hogged the limelight, but why did you have to share it with losers like Tails, Knuckles or – for Pete’s sake – Robotnik. And from then on you seemed happy to withdraw into the shadows. Sonic Heroes, Shadow the Hedgehog…., what were you thinking? 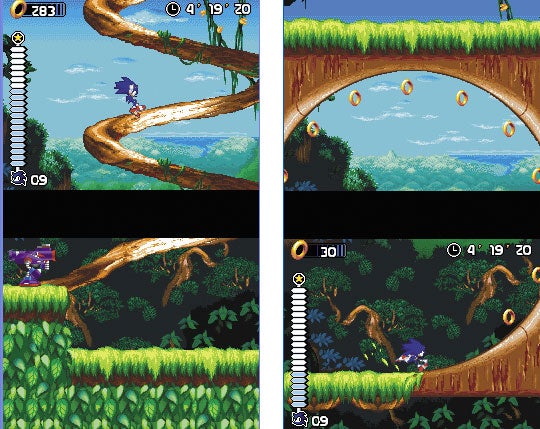 So thank goodness for the portable formats, where you’ve returned to your 2D roots. Sonic Advance 1 and 2 seemed to appease some of your fans, but your new DS release is a triumph. To follow the Dylan analogy one more time, it’s your Blood on the Tracks – the mid-career classic that nobody had any real reason to expect.


The impact is immediate. With Sonic Rush, you haven’t just brought us good 2D visuals; you’ve brought us great 2D visuals. Finally, you’ve found environments worthy of your distinctive dash and flare, full of the familiar archetypes – green hills, water-filled temples, desert ruins, neon-lit cityscapes – but with wonderful new twists. All the springs, chutes, tunnels, rails, slides, springboard and loops are in place, and the level designs are fantastic. I can’t help but love the rocket cars and corkscrew transporters. Why have you been holding out on us with this stuff for so long?

And stretching it across the two DS screens was a stroke of genius. These are levels of real height and complexity, with multiple paths to uncover and plenty of secrets to reveal. Racing down a ramp that drops from one screen into another and then through a vast loop that takes you right back up to the top is a touch right out of your golden period. You seem to have recaptured your speed without compromising the feeling of control. If vast tracts of the 3D Sonics felt like they were on rails, Sonic Rush has put us back in command of the ride.


What’s more, you’ve finally learnt to use 3D without being dominated by it. I imagine it was tempting to use the DS’ horsepower to have another crack at 3D platforming, but thank goodness you resisted. Instead, we get nice little 3D elements that add a certain wow factor to the game: industrial cranes, spinning corkscrews and – most obviously – the bosses. While Robotnik’s fiendish death machines have never been effective, they have always been spectacular, and the rotund mad scientist has put those new-fangled polygons to good use. If only Robotnik’s worst moment was not his very first appearance – that horrible bit where you have to jump over the rolling capsule almost put me off playing the rest of the game. 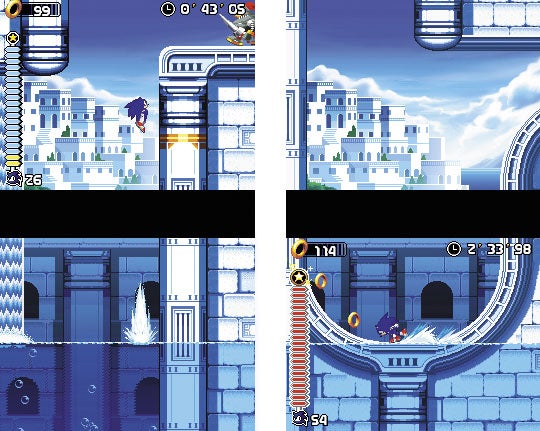 Admittedly, I’m a little disappointed that you haven’t made much of the DS touchscreen. It’s good to see the old pipe-racing bonus stages back, but making us use the stylus to drag your little blue bum around the screen smacks of desperation. Still, the controls are (mostly) right on the money in the normal stages, and it’s good to see you’ve learnt a few new tricks, with a fantastic speed boost and some cool mid-air moves to take down airborne enemies or gain an extra bit of height.


Now, some newer gamers are going to find your latest adventure a bit of a shock. There are only three lives to get through the three zones of each area – though as usual, more can be gained by grabbing rings or finding power-ups – and running out sends us back to the good old-fashioned game over screen. As the levels are packed with deadly foes and sudden death traps, this can result in a game that not only demands skill, but patience. I’ve already found certain levels could only be conquered by a learning process – chipping away at them section by section, from restart point to restart point. 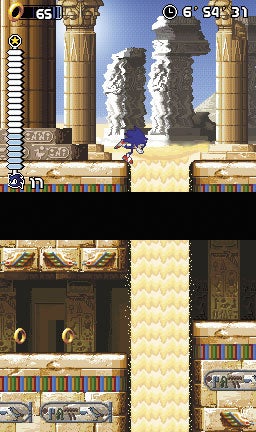 This wouldn’t matter, but there are times when you just don’t play fair. There are some evil moments where you go speeding down a ramp only to leap into oblivion, some rolling crushers that leave little room for error, and some badly placed enemies that you hit once, only to find your rings flying everywhere and your spiky self dropping down a chasm. To make things worse, some of your new moves are hard to pull off. At one point, it took me half an hour to essentially master one jump. Yet the odd thing is that, overall, I didn’t mind. There’s an old-school, arcade pleasure here – one of polishing a sequence of moves until it shines – and with only seven areas to get through, we wouldn’t want a game that you could push through in an afternoon. 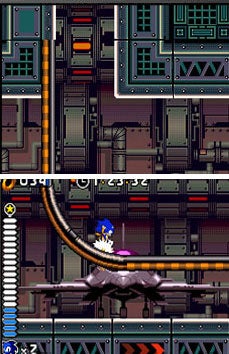 Finally, it’s good to see you without your clownish entourage. The one other playable character, Blaze the Cat, is actually a workable alternative, sacrificing a little speed for some flexible manoeuvres of her own. Her adventures don’t add a whole lot to yours – she has the same levels, just in a different order – but she’s definitely worth a spin. The same goes for the multiplayer battle mode. I remember the thrills of Sonic 2 and the split-screen VS mode. Now, thanks to the DS’ wireless connection, I can relive them without having to share the screen with my rival.


And that’s what’s so good about Sonic Rush. It’s a nostalgia trip, but one that’s been dragged into the modern age. Everything here feels right – the blue skies, the levels, the cool music that plays in the background, like the best bits of your golden age mixed with some good stuff from today. Best of all, you seem to have recaptured some of the raw, untamed speed and energy that used to make you great. Welcome back, Sonic. You have a second chance – don’t mess it up.


The first genuinely brilliant Sonic adventure in years, and a great comeback vehicle for the world’s best-loved hedgehog. Another DS essential. 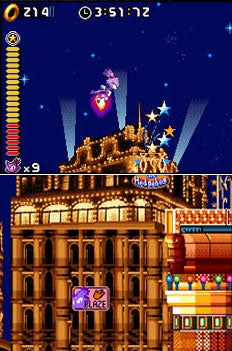