Well, I guess this is progress of a sort. Last year Sega released Sonic Riders – a rather mediocre attempt at combining the general style of the kiddie Kart racer with hoverboards, stunts and a certain well-known hedgehog plus entourage. This year Sega releases a Wii sequel, but this time it’s not merely average or uninspiring. Instead, it’s actually quite wretched. 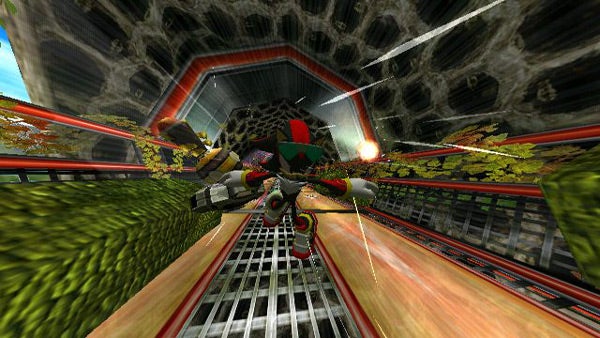 I know – I’m probably being mean. Nobody could have intended this game to have come out this way. While manufacturers of similar kiddie-friendly efforts are content to stick a bunch of cutesy characters on a collection of generically themed tracks, Sega has actually gone to considerable effort to add new features to the gameplay and frame it all with a story. Basically, Sonic and his mates get embroiled in mysterious goings-on with meteorites and a sinister robot factory, and the only way they’ll get to the bottom of it all is through the unusual investigative medium of racing. Taking to the air above a selection of tracks on hoverboards, each member of the team has his or her own chance to shine in a race against the robot menace. Come first and it’s onto the next stage of the adventure. Come second, third or anywhere after that, and it’s back to the restart menu for another crack.


Obviously the fact that our heroes are riding on hoverboards gives the game a little more spice than the average cookie-cutter Kart game, but Sega hasn’t been afraid to ring further changes. First, our chaps can pull stunts over the many jumps on the course – timing the press of the stunt button gives you different results and different rankings. Also, by collecting gold rings you can upgrade your ride on the fly, enhancing specific attributes or opening up new routes through the course. On the subject of these, each track is packed with them, some being simple side-passages, others being complex sequences of bumpers, jumps and swings that can give you an instant leap on your rivals. 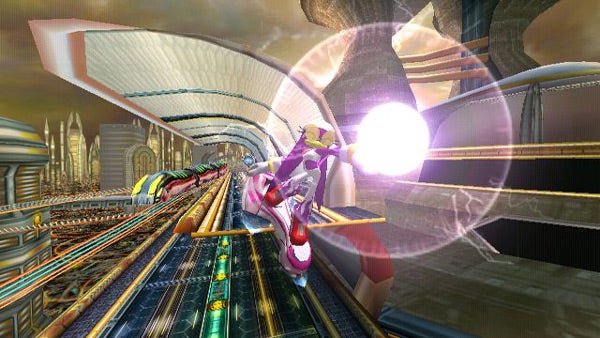 Nor is the Zero Gravity subtitle just for show. The big thing this time around is Sonic’s discovery of a peculiar object that enables the team to harness the powers of gravity. Don’t get too excited. What this actually means in practice is that a) your rider can press a button to activate a kind of slingshot device which enables you to brake and catapult him or her around tight corners and b) by storing gravity points through the correct use of stunts, he can also employ a ‘gravity dive’ speed boost, which throws objects out of the way and propels you at high speed above the track.

Now, I’m guessing that all this stuff sounded good during the briefings, meetings and presentations that must have taken place early on in the development cycle, and in many respects Sonic Riders: Zero Gravity is a perfectly competent game. The graphics aren’t exactly stunning – I could have been told that this was a 2004 GameCube game and only the odd water effect would have made me bat an eyelid – but a few of the tracks have spectacular stretches, and the character modelling and animation is up to the usual Sonic standard (albeit not the standard of the Wii-specific Sonic and the Secret Rings, which remains the Hedgehog’s most visually attractive game). The music is also pretty good if you’re a fan of the silly Sonic school of eighties Rock. If I hadn’t actually played the thing, I might think it was a decent enough title for the kids. 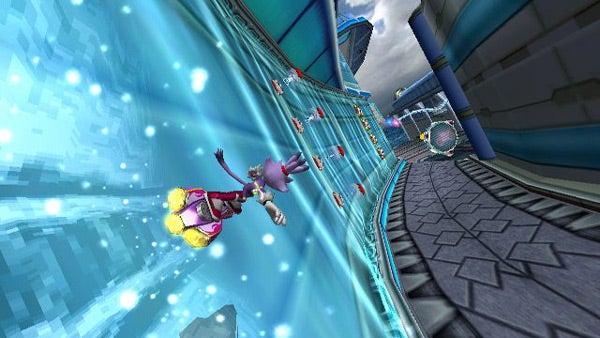 Unfortunately (for me) I have played the thing, and it’s only when you have the controller in your hands that Sonic Riders: Zero Gravity falls apart. You control the game ExciteTruck style, holding the Wii remote horizontally and tilting it left and right to move left and right and forwards and backwards to accelerate and brake. Unfortunately, here the controls don’t work so well – half the time you’re tilting the remote almost vertical to get around a corner, the other half you’re over-correcting and bouncing from wall to wall to wall. I hoped this was something I’d adjust to with time, but several hours into the game I started to suspect that it might not be all me, but that the controls simply aren’t sensitive enough to cope with the game’s twisting tracks. I’ve been told that it’s more playable with a GameCube controller plugged-in but a) I don’t have one to hand and b) call me strange, but shouldn’t a game work properly with this system’s default controller?


The track design doesn’t exactly help either. Each one is full of places that can catch you or slow you down for a vital split-second, and while the idea of having different routes available to different characters with different vehicle upgrades is quite a good one, actually triggering an alternate route is usually more a case of luck than judgement. 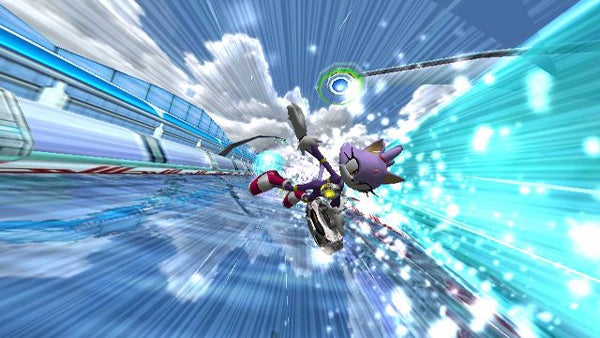 Combine the above two factors with a third – the fact that your robot rivals go like the clappers, make use of secret routes and never make a mistake – and you have a recipe for intense frustration. I like to think that I’m reasonably good at racing games, but Sonic Riders: Zero Gravity had me stymied time after time after time. Even when I did proceed, I always felt it was more a case that I’d fluked it this time, rather than I’d learnt the track or upped my game. The simple fact is that unless you master the controls and understand all the quite complex game mechanics, you haven’t got a hope of getting anywhere in Sonic Riders: Zero Gravity. Making races this tricky then expecting you to finish first, or else, simply doesn’t make any sense at all – and remember that this is a game aimed at kids!

In fact, the only thing more challenging than making it through the single player campaign is making it through a single one of the cinematic cut-scenes without skipping through. Listen to the rotten dialogue and the awful acting and wonder – why did we ever think Sonic and his chums were cool? 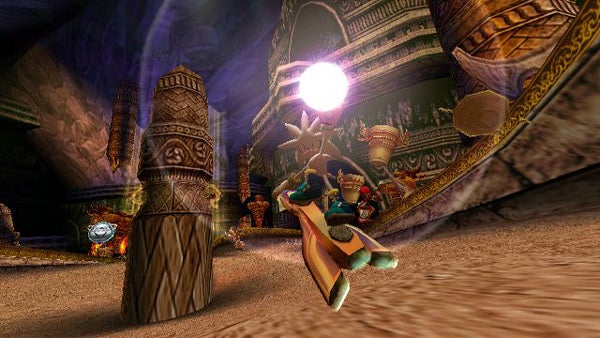 At this point it might seem that there’s nothing to recommend Sonic Riders: Zero Gravity, but there are some saving graces. Play straight races or time trials (now with online leaderboards) and the reduced difficulty level makes the action almost – almost – enjoyable. Play split-screen against friends and, as you’ll all be suffering from the same terrible controls, there’s a chance for some decent competition. Still, if you just want a good family racer there are other games that do this sort of thing much better. The additional battle modes, with a kind of airborne basketball and a mini-deathmatch arena game, don’t really work too well either. 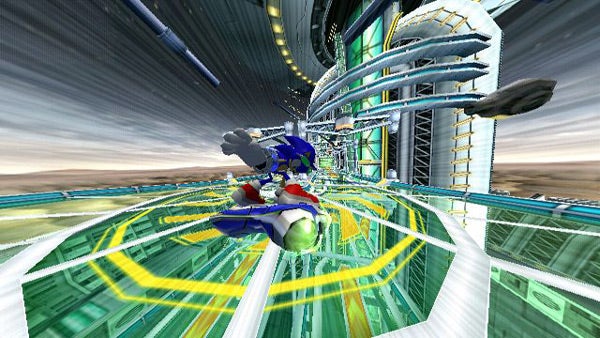 It’s strange to me that so few of the people making kiddie-friendly racers seem to understand what the makers of Mario Kart did so many years ago. Nintendo’s classic stripped things back to basics, kept the course design tight, got the handling and the speed just right and threw in a roster of superbly balanced characters that you grew to love or hate plus a selection of brilliant power-ups. The result was a game that anyone could pick up, but that had a surprising amount of tactical depth beneath the surface. Throwing on new game mechanics and more complex tracks hasn’t made Sonic Riders a better game – partly because when the controls and the handling don’t work, nothing else is going to fix things. It still might end up selling by the bucketload – poor reviews didn’t do the less execrable Sonic and Mario at the Olympic Games any harm – but this is another dark day for the Hedgehog. Let’s hope Sega and its mascot can redeem themselves sometime soon.


Another step for Sonic down the rocky road to ruin. High on frustration, short on thrills and fun, Sonic Riders: Zero Gravity is a waste of a good Wii.