Sonic Forces should have been the second part of Sonic’s one-two knockout. First, the hedgehog strikes with Sonic Mania – the retro-styled 2D Sonic that fans and critics loved, then the all-new, cutting-edge Sonic Forces comes in to drag the spiky one into a whole new console era. Sadly, this second punch goes wide, misses its target and leaves Sonic off-balance, tumbling to the mat. While not devoid of treats for the fanbase, it isn’t even a half-decent Sonic game.

The fault doesn’t lie with the visuals or production values, which are absolutely top-notch throughout. If you want to see what today’s console hardware can do for cutesy 2D or 3D platformers, look no further. It’s a pleasure to see Sonic and his chums rendered with so much vibrant colour and light, while the scenery is frequently dazzling.

Think back to the Sonics of the Mega Drive golden age, with their strange factories, mysterious ruins, neon-drenched casinos and rollercoaster loops. Now imagine all that good stuff reimagined with the kind of graphics you’d normally see in a CGI animated feature. Sure, Sonic and the team don’t look nearly as good in the close-up cinematics, but on the run at 60fps it’s amazing stuff. 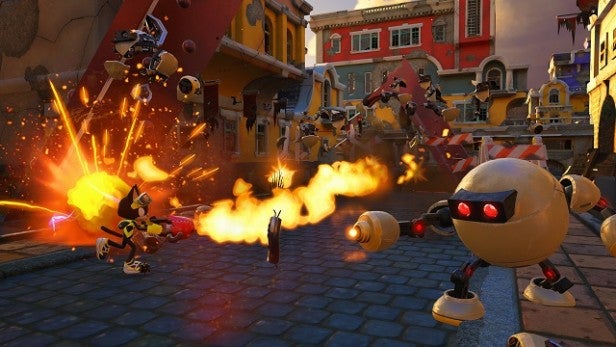 There are times, too, when Sonic Forces nails the gameplay. We actually get two different Sonics in the game. The tall, tough-guy Sonic from the more recent games; the other an alternate universe, younger Sonic that’s closer to the original 2D version. The two handle differently with specific jumping styles and destructive capabilities, but both feel tight and responsive.

When this combines with great level design, the magic happens. There are moments when the chutes, looping tracks, water-slides and grind rails take you right back to the days when Sonic was Mario’s only serious rival. Moments where the platforming is interesting enough to hook you right in. Every now and then you catch a glimpse of the game that Sonic Forces should have been.

But then Sonic Team has to go and spoil it. The main issue here is one of control. You rarely feel in real control of Sonic, and all subtlety seems to have been lost in the pursuit of empty spectacle and all-out speed. I’ve had people watch me play Sonic Forces and say it looks incredible, but then I explain that I’ve spent most of the last minute holding the analogue stick upwards and occasionally jabbing the jump button, which is mostly what you do in the 3D sections when Sonic’s running into the screen. And in the 2D sections? Well, holding right seems to do it for large chunks of the game, prodding jump at significant moments when a chasm looms or a green crosshair targets an enemy or obstacle.

The game’s 30 main levels are short, many taking little more than two to four minutes to complete. Yet while they’re fast-paced they’re surprisingly forgettable, because for all their visual splendour, there’s rarely an ingenious game mechanic or puzzle to work out – just another series of tracks and platforms to speed through as fast as you can. There are alternative routes to find and explore, items to collect and secrets to uncover, but I couldn’t find any real motivation to dig much deeper. What pleasures Sonic Forces does have are all on the surface.

There are two saving graces. First, older fans get a chance to see what old locations such as the Mystic Ruins or the Green Hill Zone might look like if a proper Sonic game was being made today. Plus, if you really love the extended Sonic family, you get a chance to hang out, or at least enjoy a cut-scene with all the primary members of the gang. The fan service is pretty good. 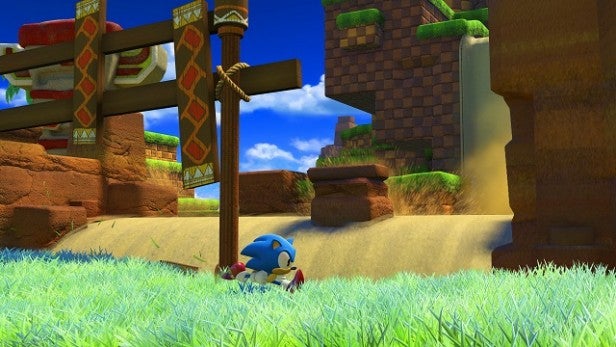 Otherwise, the big draw here is your ability to design and play with your own avatar. You see, Sonic Forces leaves key levels to be played through with this new user-created star, known as the Rookie, or as a duo with the Rookie and Shadow or Sonic.

You can choose an animal type, each with its own specific moves and abilities, with hedgehogs, cats, dogs, bears and rabbits all covered. You can then kit them out with clothes, accessories and any unlocked weapon – and upgrade this stuff with the loot you’ll have flung at you every time you complete one of the game’s unimaginative challenges, or if you achieve a decent score on a stage.

Your avatar may not always have the raw speed or agility of Sonic, but it’s fun to add your own critter to the Sonic universe, dress them up and take them for a spin. Some have extremely useful moves, like the cat holding onto one ring after contact with an enemy sends them spinning. Plus, the weapons add some variety and a little action to the game’s odd battle sequences. While you might find the lack of some key moves like a double-jump annoying, at least the avatar levels leave you feeling like you might be in control.

The Sonic levels often don’t, and while Sonic Forces is just too short to be boring (it’s about six hours max, and three might do it if you skip the cut-scenes), it isn’t exactly enthralling either.

The same could be said of the storyline, which starts off strong with an intriguing new villain, but soon becomes a mess of world-threatening powers, fiendish space stations, evil armies and giant killer mechs – none of which makes much sense. Even working through the free DLC that gives Shadow’s side of the story doesn’t help, while Shadow’s levels are just variations of what you’ve already played through with the star. 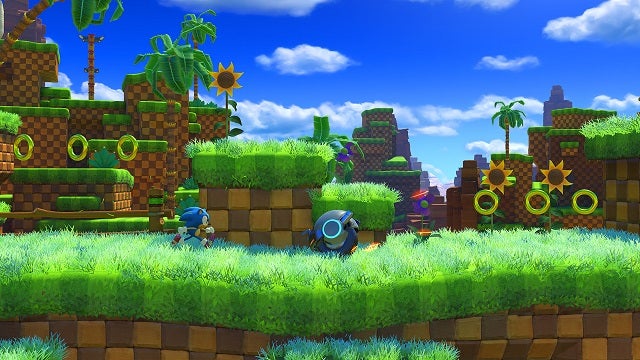 The difficulty level, meanwhile, seems stuck on dimwit easy for most of the game, before going overboard on cheap one-drop kills, surprise fatalities and cheap move boss battles in the final stages. None of this stuff is exactly endearing. In fact, it seems part and parcel of a game built with artistry but little understanding of what makes Sonic tick.

Like Sonic? Play Sonic Mania. Played Sonic Mania? Play it some more. While Sonic Forces looks fantastic, it’s one of the least engaging games in the entire series.

True, it doesn’t have the broken controls or half-witted camera of the worst examples, but there’s very little here to actually play, enjoy or discover – bar a cool custom character designer and a whole bunch of costumes to unlock.