Exclusive to Nintendo 3DS
I’m sad to say, most of us who remember Sega’s blue hedgehog from his Mega Drive glory days have learnt to approach a new Sonic game with trepidation. For the few decent efforts of the past 20 years, such as Sonic Rush and Sonic Colors, you can name a dozen mediocre 2D platformers and dubious 3D platformers wrecked by poor cameras and controls.

It warms the old heart, then, to report that Sonic Boom: Fire & Ice isn’t bad at all. While you’d struggle to describe it as a return to form, it has enough of the old Sonic magic to make you glad the spiky speed-freak is still around. Given the quality of previous Sonic Boom releases, that’s a minor miracle.

The game ties into the Sonic Boom cartoon series, but don’t worry if that’s a mystery to you. All you need to know is that Doctor Eggman (or Robotnik as we used to call him in the good old days) is up to his old tricks again, creating a troublesome robot who has opened fissures around the islands that Sonic and his friends call home.

With these fissures emitting weird spiralling gusts of energy, much meterological mayhem ensues. Sonic bands together with Tails (two-tailed fox) and Amy (pink would-be girlfriend) to close the fissures and stop the metallic menace, collecting Sticks (boomerang-slinging Aussie) and Knuckles (red knuckle-dragging moron) along the way. 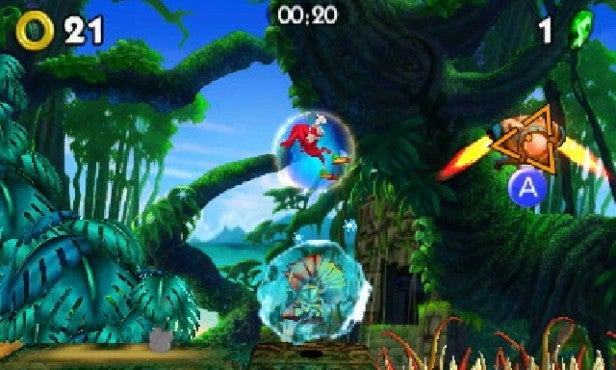 From the off, it’s clear that we’re back in classic Sonic territory. The majority of the levels are old-school 2D platform efforts, and Sonic looks and controls much like he did in the good old days, with a jump and homing bounce attack his mainstays and sheer blue-blur speed his biggest asset.

What’s more, Sega seems to have remembered what the fans really want. Big springs that catapult you around the screen? Check. High-speed rollercoaster sections that have you looping loops and twisting through 360 degrees? Check. Multiple routes, secrets, and cool power-ups? All check. You could almost forget the past 20 years.

Not that there isn’t some new stuff here as well. For a start, Sonic can now switch between the powers of fire and ice. Someone has helpfully filled the levels with blocks of ice and water. Run over a block of water while in fire mode and you’ll fall straight through it, often falling foul of the spikes concealed below. Run over it in ice mode and it freezes, meaning you’ll slide on it and not go through.

In addition, walls of ice are permeable to a hedgehog with fire powers active, while fire also helps you to light fuses; ideal when there are obstacles to be blown up. On the other hand, ice turns jets of water into useful ice-slides, perfect for navigating large, spike-packed gaps. 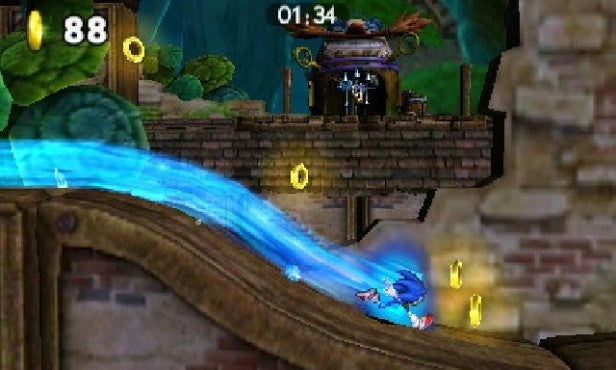 That’s not all. Unlock Sonic’s friends and you can switch between them, then use the abilities that are specific to each. Tails can hover, fire a laser beam and ride air currents upwards or sideways. Knuckles can dig underground. Amy can hammer down large rocky columns, while Sticks can throw her boomerang – with manual guidance, if need be.

This makes for some entertaining platforming with light puzzle elements and a fantastic sense of speed. The level design can be a little generic, as it passes through icy levels, Jurassic Park fossil trails and the inevitable spooky, gothic levels. You’ll miss the sense of innovation and progress you’ll find in Nintendo’s best 3DS platformers.

Still, it’s fun for all of that and looks great for a 3DS game, with impressive scenery, colourful characters, strong themes for the levels and some fantastic use of 3D depth. For my money, it’s one of the best-looking titles on the handheld. 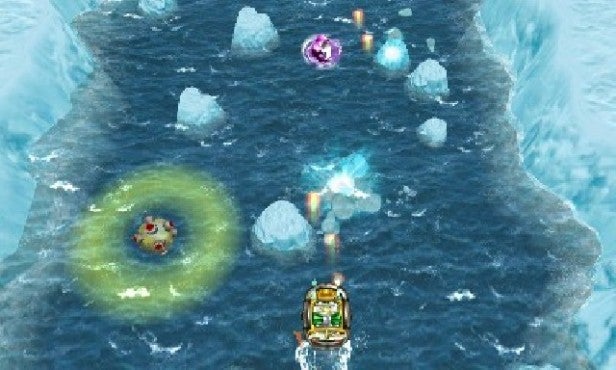 The problems only kick in when Sonic abandons his traditional 2D platform strengths. The boss battles are actually pretty good, splashing the action across both screens and dishing out huge monsters that manage to fill both. Sadly, some into-the-screen, endless runner-style sequences grow tiresome and provide too little warning of impending peril. To survive you’ll end up memorising the levels, remembering just when to jump, swing, slide sideways or switch from fire to ice. They’re dramatic and sort of spectacular, but not really all that fun.

Yet even they win over levels where Tails pilots a hovercraft through ice-flows or a submarine on a mission to find sunken trading cars. These are simply boring and occasionally frustrating, to the point that my main strategy for the hovercraft levels became boosting most of the way through them.

In their defence, you don’t actually have to complete these to make progress through the game. The same can’t be said of the 2D platform race levels, where you have to race one of Eggman’s robots around the level, beating them to open up the next section of the world. The first few are pitifully easy, the last few tight, giving you the only frustrating moments of pixel-perfect platforming in the whole game. 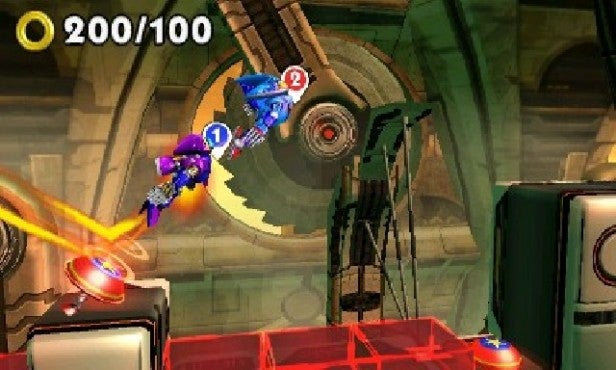 And while you’re getting fed up with these bits, you start to ponder other things. Why is so little use made of the different powers of your different Sonic heroes? Why aren’t your fire and ice powers used in more interesting ways? Where are all the clever ideas Nintendo packs into its 2D platformers? Why does hitting an enemy often send you so far back – with frequently disastrous consequences in the race levels and some platform levels? Why does the usual Sonic rule – one strike loses your rings, the next your life – not apply to the into-the-screen levels? Why the one-touch insta-death?

These are niggling and irritating questions, and they and the non-platform sections spoil what’s otherwise Sonic’s finest hour of recent years. There’s a little payback in a local multi-player spin on the racing, with racing robots you can build and upgrade using the Ragnium collected in the game – but I’m not sure this is compelling enough to make up for the bad stuff.

Verdict
This isn’t the smartest, most exciting or most imaginative 2D platformer you’ll find on the 3DS. In fact, Sega seems hell-bent on hobbling its chances with a selection of tedious or frustrating mini-games.

Yet, overall, Sonic Boom: Fire and Ice isn’t bad, dishing out the kind of rollercoaster looping, spring-heeled madness that first made us love the little fella. It’s a high-speed sprint in the right direction; it’s just a shame about the missteps on the way.