If you’re expecting the second coming of Sonic, or his first genuinely classic foray in 3D, prepare for some disappointment. It’s not that Sonic and the Secret Rings is a disaster, but neither is it the game we might have hoped for.


It’s not hard to understand the high expectations surrounding this title. Nobody was surprised when Sonic the Hedgehog on the 360 turned out to be a bit of a nightmare, but this was Sonic on the Wii! We were promised innovative controls, a return to high-speed action and adventure, no more tedious interludes where you have to play Tails or Shadow. Could you ask for anything more? Well, how about some decent gameplay. This is a game you come into wanting it to be as good as Sonic 2, and instead it’s only roughly on a par with Sonic Adventure 2. 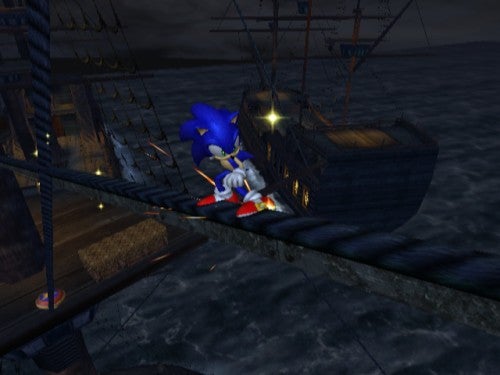 Fancy some specifics? Well, before we get to why the game doesn’t quite gel, it should be said that there is plenty here to warm the cockles of the long-term Sonic fan’s heart. Firstly, Sonic and the Secret Rings is a bit of a back to basics effort. There are no tiresome adventure elements to put up with, you play as Sonic the whole way through, and the emphasis is firmly on a) speed, b) jumping and c) jumping at enemies in order to obliterate them. In other words, we’re going back to Sonic’s first principles, and even if the action is into or out of the screen rather than scrolling from left to right across it, you’re still doing basically what you did back in the good old days.


The camera is fixed, and you move the spikey blue beast by tilting the Wii remote left or right, pressing a button to jump, and using other tilting or pushing motions to make Sonic move backwards, take a second boost jump or home in and attack enemies. You do miss the free-roaming liberty of a classic 3D platformer like Mario 64 or Ratchet & Clank, but – when the game works – it gives a great sense of the old Sonic gameplay bought back to life. 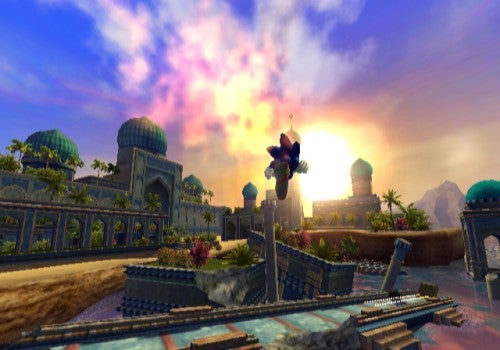 More good news. Sonic and the Secret Rings is easily the most visually accomplished Sonic game in years. In fact, it’s one of the first Wii titles that looks like it couldn’t have been done two years ago on the Gamecube, and at its best – the lush greenery and waterfalls of Dinosaur Jungle, the raging seas of Pirate Storm – it has a layer of visual polish that puts a good number of ‘true next generation’ games to shame. I know it’s not high-definition, but there are some gorgeous reflective water and particle effects, and it all runs at a terrifying lick without a hint of slowdown. And if you want big-time spectacle, you get it in spades. Even the first ‘proper’ level, Sand Oasis, has a few jaw-dropping moments, while Levitated Ruin later on features a stomping race through the skies that packs in as many high-speed thrills as you could possibly wish for. 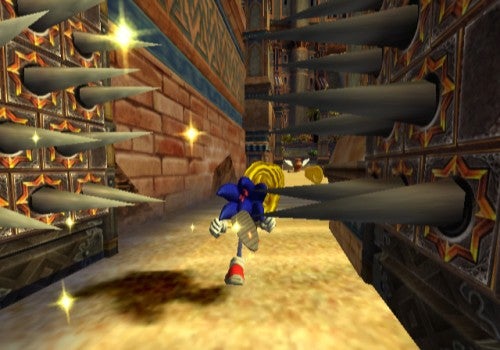 What’s more, the game finds some ingenious uses for the gimmick-friendly Wii controller. The sheer amount of tilting and bashing would be enough, but you’re also expected to ‘pump’ the remote, pull it back and push forwards to fire catapults, and swing it wildly from left to right to make ropes move. It’s fun, and don’t forget that gizmos – jump-pads, springs, zip-lines and the like – have always been a big part of Sonic’s appeal. Sonic and the Secret Rings hasn’t, and in terms of simply flinging the hedgehog around the screen at a pace that makes your eyes water, this instalment does things better than any since Sonic Adventure.


Finally, there are some interesting mechanics here – and not in the ‘interesting but useless’ sense of the Chao-raising or fishing sub-games of other 3D Sonic titles. By completing levels, Sonic gathers new skills, which can be equipped via one of four customizable magic rings to improve the hedgehog’s speed, enhance his attack capabilities or give him new powers that can be kicked in at the press of a button. In effect, each magic ring becomes an optimised Sonic setup, enabling you to use one for levels where speed is of the essence, and another for levels where the enemy count gets scarey. 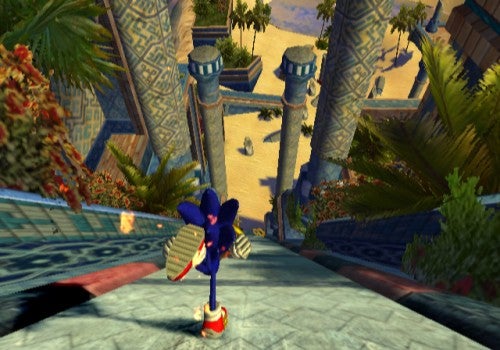 Nice work, Sega. If we were marking Sonic and the Secret Rings for good ideas and a solid basic grasp of what makes Sonic tick, it would score fairly highly. The problem is that, while all these fundamentals are all pretty great, the real nitty-gritty of the game design is all over the shop. The first issue is that the game runs so heavily on rails, and that the camera is completely fixed and relatively dumb. The same criticism was made of Sonic Adventure when it first appeared on Dreamcast, with its huge sections where you felt you had completely lost control of the character, but here it’s much, much worse.


There are critical points where you either don’t have time to react to an upcoming peril, or you have to fight against the fixed camera in order to defeat a specific baddy or grab a certain object. You can brake to halt the hedgehog’s progress, or trigger a special slow-down power to give you room to breather, but there will be numerous occasions when you can only watch helpless as Sonic propels himself into a waiting cactus or proves unable to escape a rampaging dinosaur. And when I’m fighting three vicious overgrown carnivorous plants inside an arena, I don’t really want Sonic to have to stumble blindly backwards into danger just because it’s the only way to get the gits on screen for a target lock-on. Surely there was a more intelligent way to handle the camera? 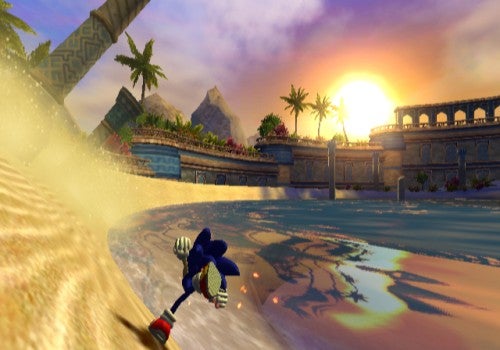 To make things worse, the controls are far from perfect. The basic left/right tilt is fine after a couple of level’s practice, but I was still struggling with the jump-attack mechanism several hours on. If an enemy is targeted with a red reticule, thrusting the remote forwards attacks him. However, if the target is green or not visible, the same movement triggers a boost jump. As the reticule blinks on and off depending on the current angle of the camera, this can be a recipe for disaster, particularly when sections require precision jumping or a chain of lock-on attacks to be performed. 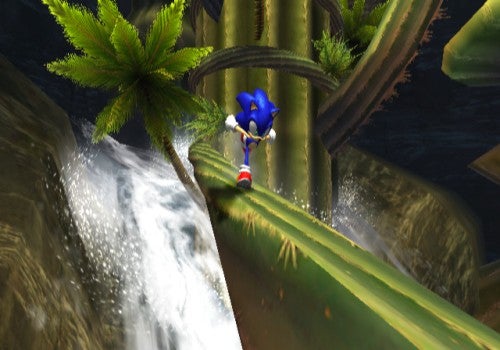 The overall result is a game that will have you over the moon one minute, and threatening to throw the remote through the screen in a petulant rage the next. The structure is a little to blame here. The game is sensibly divided into a series of worlds, but each world is further divided into a series of unlockable challenges, which can be accessed once certain other challenges are completed. The best follow the traditional Sonic theme. Get from one end of the level to the other, grabbing rings along the way to maintain your defences, and either avoiding or killing any enemies. 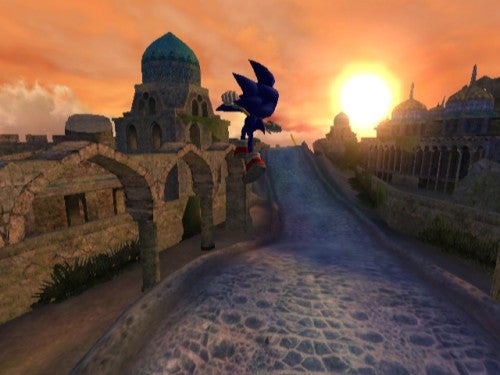 However, other challenges demand that you kill a minimum number of enemies, collect so many rings, avoid smashing jars or complete another mildly tricky and irritating task. It not only means that you are forced to repeat certain sections of the world over and over again, albeit with some tweaks and different objectives, but also that you have to grind away at some of those challenges over and over again until you meet their requirements. When you’ve collected 98 of 99 rings only to run headlong into a suddenly materialising enemy, seconds before the finish line, it’s hard to suppress a furious strop. Don’t get me wrong – Sonic and the Secret Rings can be one of the purest, most exhilarating platform games you’ve played in years. It’s just that it can also be one of the most miserable, off-putting and downright idiotic ones as well.


While I’m moaning, can we have some kind of moratorium on Wii multiplayer mini-game extravaganzas? They’re rapidly becoming the Nintendo equivalent of the ill-conceived deathmatch modes that litter so many Xbox 360 releases. Sonic’s contribution to the form is a mildly wretched spin on the Mario Party board game with poor instructions and a remarkably unexciting range of mini-games to get through. The Pirate Cove board also suffers from some impressively mean penalty squares that hit the hapless player without warning or reason. Expect huge sobbing tantrums if you’re cruel enough to play it with the kids. Also, did I mention the music? I know cheesy eighties rock is part of the whole Hedgehog aesthetic, but does it really have to be as bad and as mindlessly repetitive as this? 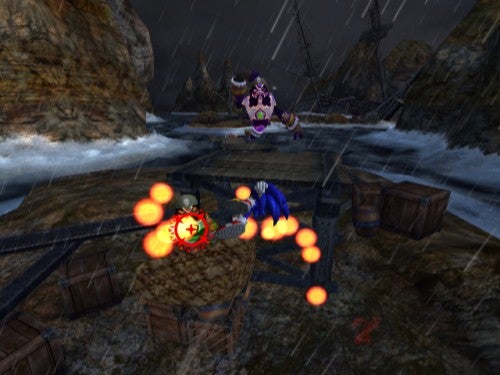 Sorry. I love Sonic as much as the next ageing games fan, but there’s no doubt in my mind that Sonic and the Secret Rings still really isn’t good enough to warrant some of the praise it has been getting. It’s visually impressive and it can be absolutely thrilling, but a sizable portion of the game is just no fun at all. It’s not the resurrection of Sonic’s 3D career, and no amount of wishful thinking is going to make it so. At best, it’s just a sign that – with a little more love and a lot more attention to the nitty-gritty detail of gameplay – the hedgehog’s fortunes could be on the mend.


At times the superb visuals and high-speed, back-to-basics gameplay make this the best Sonic console game in years, but sheer game design idiocy stops it all coming together. It’s the best 3D Sonic for a while, but our spikey chum hasn’t quite hit his comeback form yet.