The Sol Republic Soundtrack Pro ANC are a great value set of over-ear headphones for home and office use. The only downside is that their ANC is a little underpowered.

Sitting alongside the non-ANC Soundtrack over-ears and new Amps Air Plus true wireless earbuds, on paper the Soundtrack Pro ANC offer a pretty decent set of features for a pair of mid-range over-ears with ANC (active noise cancellation), Bluetooth 5.0 and 32 hours of battery life.

In real-world testing they perform well considering the price, especially when compared to similarly priced headphones from the likes of KitSound, TaoTronics and House of Marley.

As a result, we’d thoroughly recommend the Soundtrack Pro ANC to any casual listener looking for over-ears for home or office use. The only downside is that the ANC provision is a little weak – although that’s hardly surprising given their price.

The Soundtrack Pro ANC sport an unassuming design, as long as you don’t opt for the gold colour. Aside from the minor design “flourish” on each ear cup, they look similar to every other set of £200 over-ears I’ve tested. They have a basic plastic casing and non-removable fake leather padding for earpads.

Despite the use of plastic, build quality is decent. The adjustable band feels robust and offers a decent amount of flex. The design also makes it easy to fold them flat and carry them in a bag – although the lack of a carry case means they’re prone to scratching. 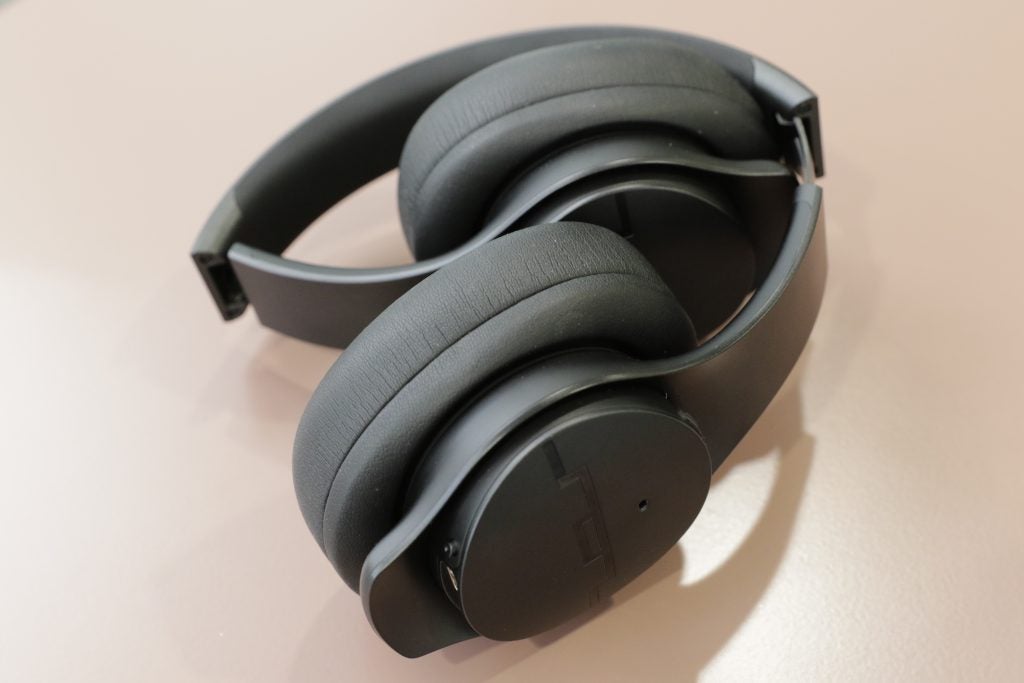 Fit is good, with the cups offering a reasonable seal and solid noise isolation as a result. I had no issue wearing the Soundtrack Pro ANC for an entire work day and long-haul flight.

The onboard controls are intuitive. The power and ANC On/Off control sits on the bottom side of the right cup alongside a USB-C charging port. Play/Pause and volume controls sit above those buttons on the top of the same cup.

The Soundtrack Pro’s battery life is respectable. Even with ANC on, the headphones survived around half a week of regular use in the office before requiring a top up. The inclusion of Fast Charge is a welcome touch that made it quick and easy to get a full day’s worth of battery after half an hour of connection to the mains. 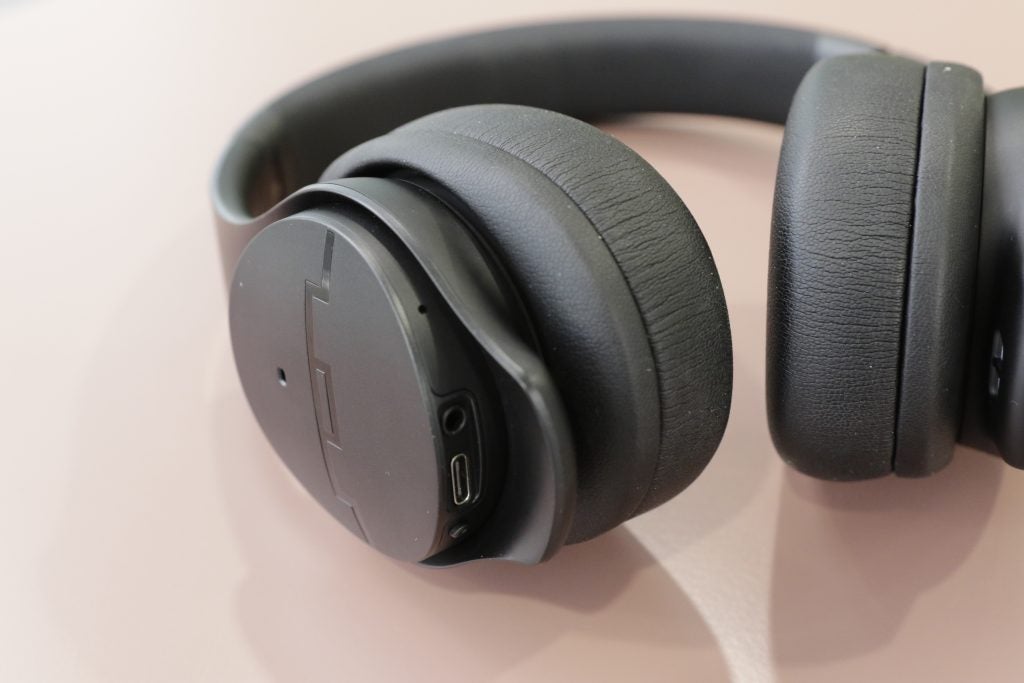 One downside is that the mic is prone to picking up background noise, which is an issue if you plan to use the Soundtrack Pro ANC to make and take calls. In addition, these over-ears don’t offer support for digital assistants such as Amazon Alexa or Google Assistant, which is a minor but forgivable annoyance.

I’m also a little disappointed that the headphones don’t feature any sensors in the cups, which means they don’t offer the auto-pause functionality of most competing, similarly priced units. This means music will continue to play on taking the headphones off, unless you manually pause it.

This may sound like a minor niggle, but it quickly becomes an annoyance when using the headphones in an office, where you’ll repeatedly be taking them on and off.

The 40mm drivers offer decent quality audio for a set of over-ear headphones, with the Soundtrack Pro ANC offer surprisingly good tonal balance. Listening to classical music and layered post rock, every part of the sound come across as defined. The string sections were separated from the rumbling drums and had a pleasing swoop.

The Soundtrack Pro ANC also dealt with more attacking genres such as punk and metal fairly well. The mid-heavy guitar sections displayed bite, but were pleasingly free of the acidic quality demonstrated on other similarly priced sets. Dynamism, too, is solid – post-rock crescendos conveyed a nice swoop and rock breakdowns felt weighty. 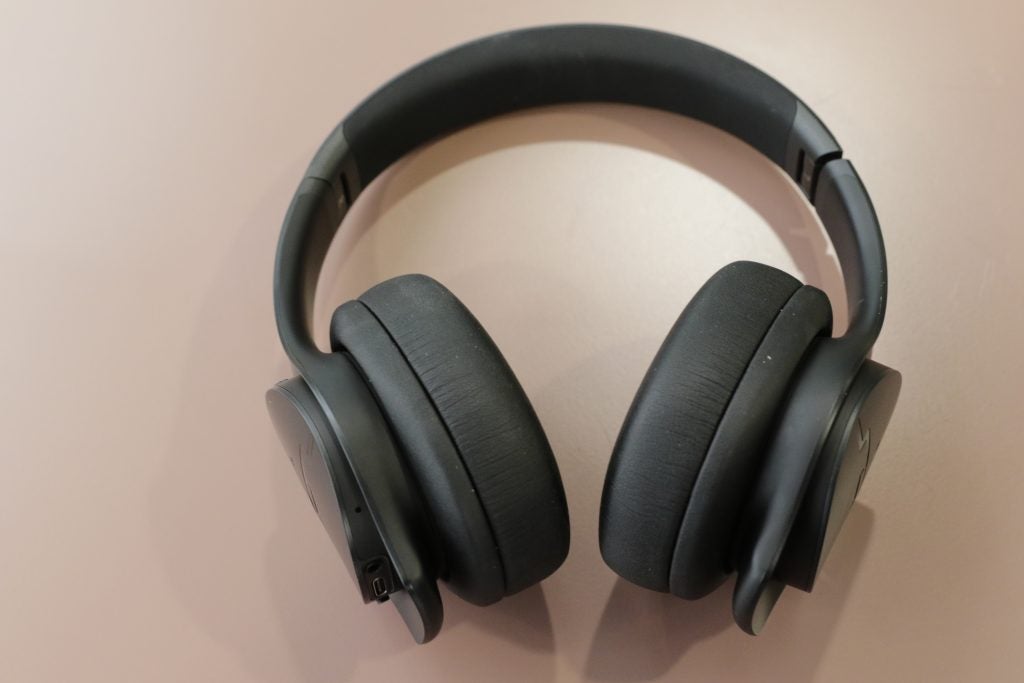 Bass is reasonably powerful, with rumbling blues bass lines sounding deep; the opening section of industrial tracks were appropriately menacing. The only downside is that bass could be a little more precise. In bass-heavy tracks, the more detailed and subtle parts of the sound could be lost, although the issue isn’t as pronounced as it is on rival sets.

Downsides include the fact that the ANC isn’t as powerful as I’d like, and the connection can get a little patchy in busy signal areas.

ANC is fine for background office noise, although some loud sounds will still creep through. But it isn’t powerful enough to combat plane or commuter noise. Listening to music on my commute, the sound of the tube’s engine was still audible.

I also suffered dropouts when I passed through busy signal areas such as Waterloo and King’s Cross London station, although this proved an issue with most of the wireless headphones I’ve tested.

The Sol Republic Soundtrack Pro ANC aren’t the best noise-cancelling headphones on the market. But considering their price they offer decent, surprisingly balanced audio quality, lengthy battery life and a comfortable fit. The only downside is that the ANC is a little underpowered, although this is hardly a surprise given their price. As a result:

You should buy the Sol Republic Soundtrack Pro ANC if:

You shouldn’t buy the Sol Republic Soundtrack Pro ANC if: