The Amps Air Plus decent true wireless earbuds, considering their affordable price. For your money, you get decent audio and battery life plus a gym ready fit

The Amps Air Plus are the third generation of Sol Republic’s Amps Air series and the first to offer active noise cancellation.

With the Amps Air Plus, Sol Republic intends to offer a premium set of features for less than the £200 mark, pitting it against the likes of the Apple AirPods Pro and the Sony WF-1000XM3 by ANC, fast charging and a IPX4 water resistance rating.

The end result is a solid pair of true-wireless earbuds that can be used for the morning commute and gym. The only downside is that the built-in microphones and fiddly touch controls are a pain to use, an issue if you’re using them for exercise or to take calls.

The Amps Air Plus have a completely different design to the Amps Air 2.0, which were a modest refinement on the company’s original true-wireless earbuds. This is no bad thing as the changes Sol Republic has made are positive and improve the Plus’ fit and audio quality.

For starters, Sol Republic’s completely changed the buds form factor, giving them a more pebble shape than their predecessors. This change sounds small, but I found it made the earbuds sit much more snuggly in the ear, offering a more solid fit and tighter seal. This in turn provides a good foundation for noise isolation, even with the ANC off. 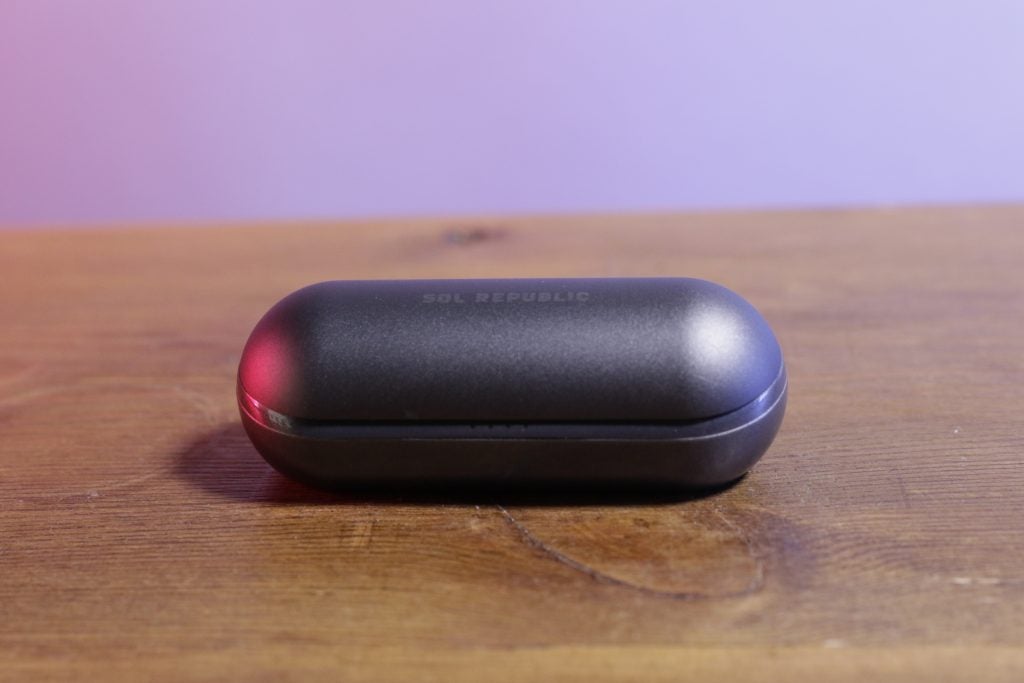 The fit is also secure enough to survive the most animated of workouts. Testing them while running, working a bag and climbing, I never had the earbuds accidentally dislodge, which was an issue with the Amps Air 2.0. The only sets I’ve tested that provide a better, more secure fit are bespoke gym buds with clip or wing tips, like the Jaybird Vista.

Sol Republic’s also managed to improve the earbuds battery life, bringing the Plus to five hours of use with ANC engaged. The case provides a stated 2.5 charges worth of juice which means most people will get a few days of use before recharging. The second generation Amps Air only offered three hours listening time off a single charge by comparison.

The case has had a similar spruce. It has been stretched and now features LED lights to show battery life on its front as well as a USB-C connection on its back. Open the case up and Sol Republic has included a physical pairing button. The size is suitably pocket friendly and a welcome step forward for the Amps Air line. 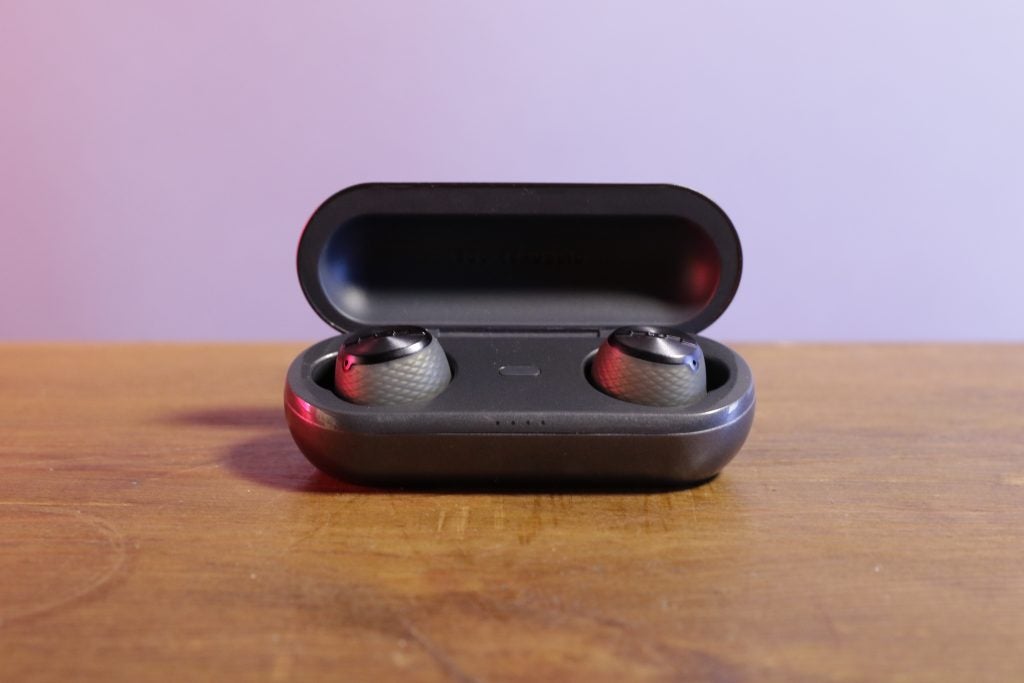 The only design feature I’m not 100% sold on is the new touch control system. Unlike the previous Amps Air 2.0, the Plus has capacitive touch controls. They generally work ok, though you have to tap them quite hard to get them to respond to pause/play requests. But in even moderately damp conditions they go a little haywire.

Trying to take a call mid-run in drizzly conditions the earbud refused to acknowledge my tap commands. Even when it did the on board microphone wasn’t powerful enough, so the person on the other end was treated to wind-noise with intermittent bits of profanity from me as I tried to end the call. I’d personally have liked the buds to have a physical control system, like the first and second generation Amps Air.

Tonal balance isn’t the best, but its fine for more casual listeners. Highs can on occasion feel a little acidic, especially in attacking genres like metal and rock, but generally each part of the sound feels suitably separated. The only slight issue is that the midrange in more subtle genres and compositions, particularly in classical and textured post rock, can feel under-represented.

This is largely down to the low-end which isn’t quite as precise as I’d like. Walking bass lines don’t sound as tight. and they don’t have the precise punch felt in more expensive sets, such as the B&O E8. But this is hardly surprising given the huge disparity in price between the two. 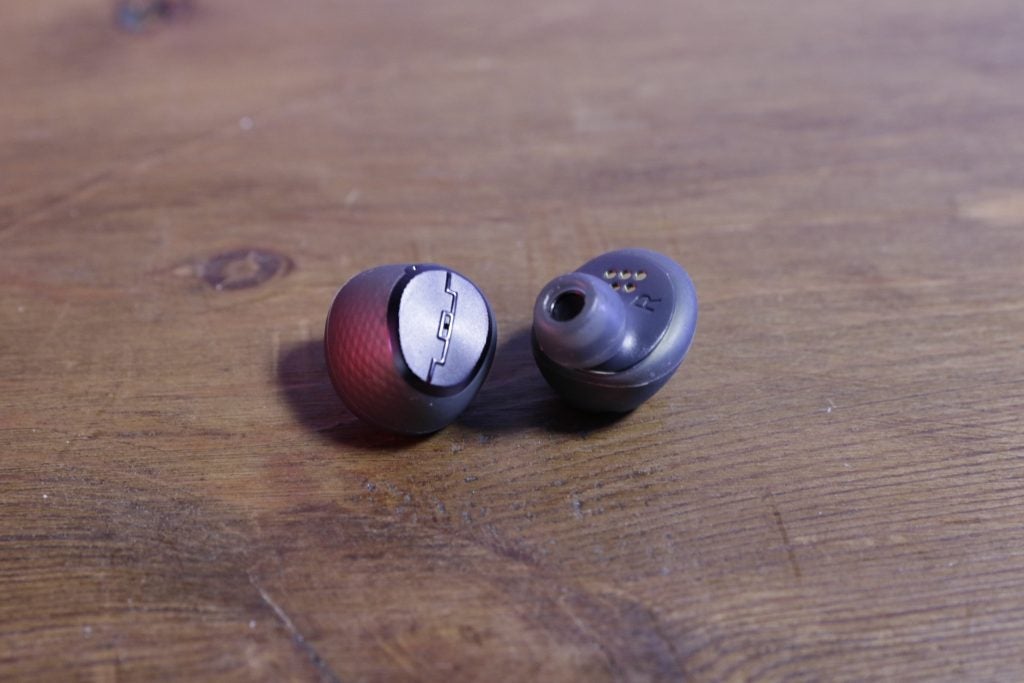 The active noise cancellation is a similar story. The Amps Air Plus don’t match manage the performance of the excellent WF-1000XM3, but in most situations the ANC works well enough. Background tube and gym noise can creep in, but the ANC drowns out the hustle and bustle of an office environment.

Outside of this, the audio is generally a step up on most sub-£200 sets with good dynamics and detail. Listening to classical music crescendo retained a pleasing swoop and felt noticeably more powerful than competing sets, like the AirPods Pro.

Listening to complex jazz and textured post rock there was a pleasing separation between the various string and brass sections. Parts that were lost on things like the TicPods 2 Pro remained audible on the Amps Air Plus.

Should you buy the Sol Republic Amps Air Plus?

If you’re looking for a decent alternative to the Apple AirPods Pro the Amps Air Plus are an excellent option.

The earbuds match the AirPods Pro in most areas. This, plus their wonderfully unassuming design and solid fit make them a decent choice for casual music listeners looking for a true wireless set for the morning commute and gym. More serious music fans would do well to pay a little more to get a better audio performance.