What is the SO4 capsule machine?

Compact capsule machines mean we never have to suffer a bad Americano again, but many are designed just for coffee. The SO4 takes the capsule concept further, with a high bar pressure for the perfect crema as well as lower pressure for black tea, herbal teas and filter coffee drinks. It’s also ideal for busy households and home offices where regular descaling often gets forgotten, thanks to a warning light that serves as a gentle reminder. The machine is available in metallic red, white or black plus it’s compatible with SO4 faceplate kits. 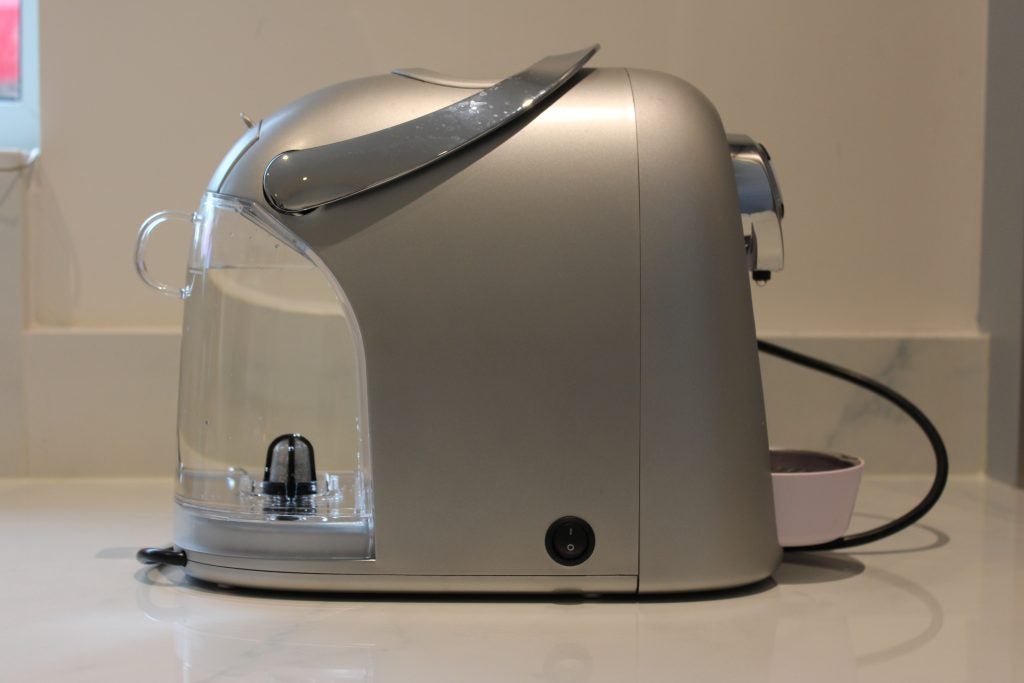 SO4 capsule machine – Design and features

The SO4 has a feature rather than aesthetically-led design. While its two-tone exterior is visually pleasing enough, it’s the user experience that’s prioritised. For example, the water tank at the back isn’t just removable and features an easy grab loop to pull it out, there’s also a flip-back lid that means you can refill the water without dashing to the sink with the tank – perfect for those mid-dispensing moments when you realise it’s about to run dry.

Inside there’s a two-part bin that allows drips to drain through and allows used capsules to be thrown away separately from the accumulated liquid. It’s also capacious enough for plenty of used capsules, so there’s no need to empty it constantly. Its controls are minimal – on the front, the top two buttons handle espresso and a slightly larger ‘long coffee’ (as well as cocoa and milk) while the bottom blue button is the place to go for Americanos and tea. Each has a preset amount but these can be altered up to 250ml. The buttons are flanked by a descaling light and a warning light (in conjunction with a loud beep) to indicate if something else needs attention, such as priming. It also has an eco mode after an hour, which is longer than most. 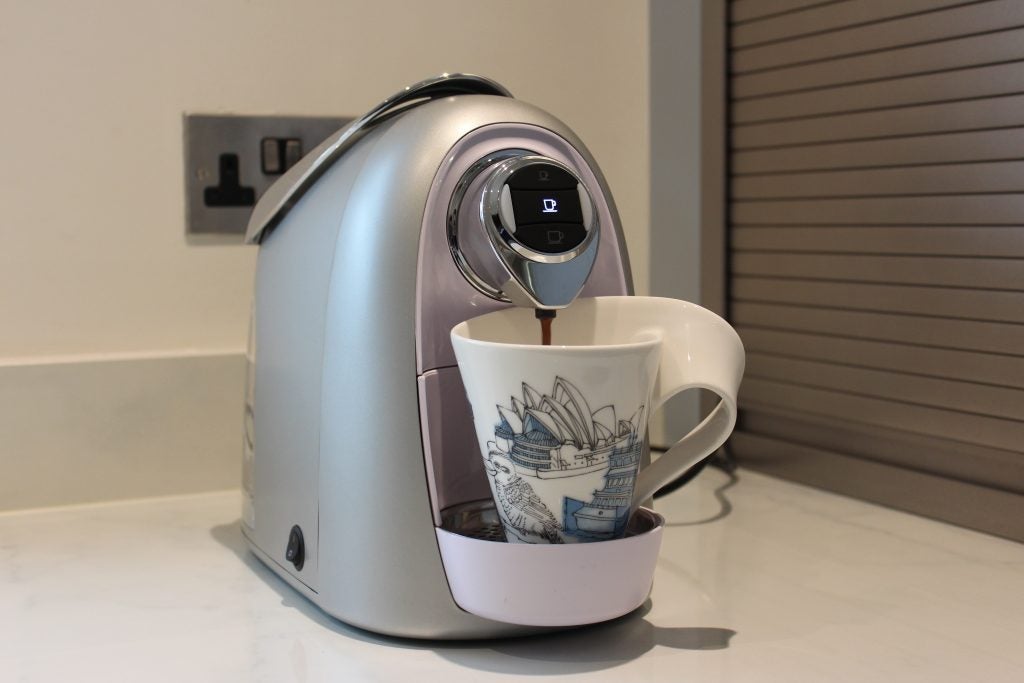 A discreet flick switch at the side of the machine turned it on but heat-up took almost a minute until it was ready to make a drink. I started by making a latte using a coffee capsule with a milk capsule and the middle ‘long coffee’ button for both. The grill on the cup platform was reversible to provide less height for a larger cup and mine just squeezed in, although wider mugs wouldn’t fit.

To insert a capsule, I rotated the top lever back to reveal a shaped slot for it, before pulling the lever forwards to lock it into place. This is a method that capsule machine designs of the last few years have largely discarded, preferring to control the process automatically, but it would suit someone who likes to feel more involved in the brewing process. The coffee capsule produced a good shot with a perfect crema. It was less aromatic than expected but the colour and viscosity was authentic. Next, I inserted a milk capsule. While this didn’t sit on top of the coffee like foamed milk, instead mixing in, it was easier than heating milk separately.

As the SO4 retained a little liquid between capsules, I had to rotate the lever back again to release the used capsule, before running it empty to clean the nozzle. Then I inserted a black tea capsule and used the blue button to brew a longer drink. This lower pressure setting produced a better cup of tea than comparable drinks machines, retaining the strength of flavour that can be lacking. There was a slight froth on the top of the beverage but this may have been from the force of dispensing. 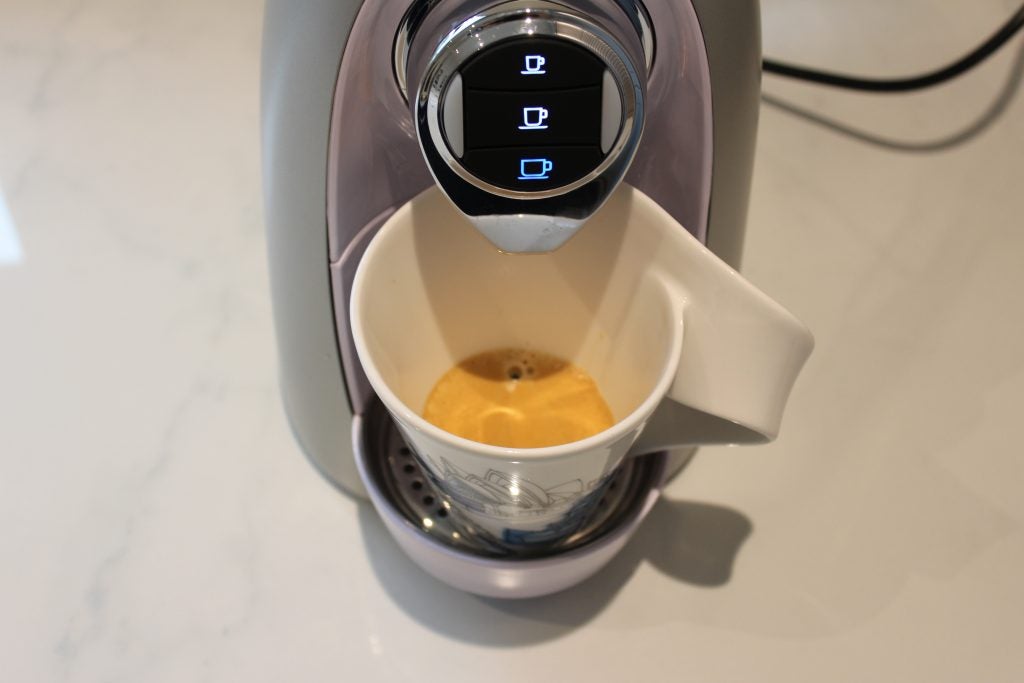 Next, I made a hot chocolate using a milk pod first (to help retain the froth on top) followed by a cocoa capsule. The resulting drink was delicious – sweet and warming without being sickly. There was some residue left at the bottom of the cup but it was mostly well combined. I finished by making an espresso using the top button. Flipping the grill over to raise the platform meant the cup was the perfect height to reach the spout, so there were no splashes. The crema was thick and smooth plus the espresso smelled and tasted delicious.

SO4 capsule machine – How good is the coffee?

Coffee sniffers may be disappointed by the lack of aroma that comes from the SO4’s longer drinks. While the crema is perfect and the taste full and smooth, the coffee in this format doesn’t have the same intoxicating smell as its espresso. The variety of available coffee is more limited than some – there’s just a few to choose from plus decaff, with the rest of the capsules covering cocoa, tea, lemon tea, ginseng and chamomile. The milk pods with coffee may also not be to everyone’s taste as they’re a little oversweet. 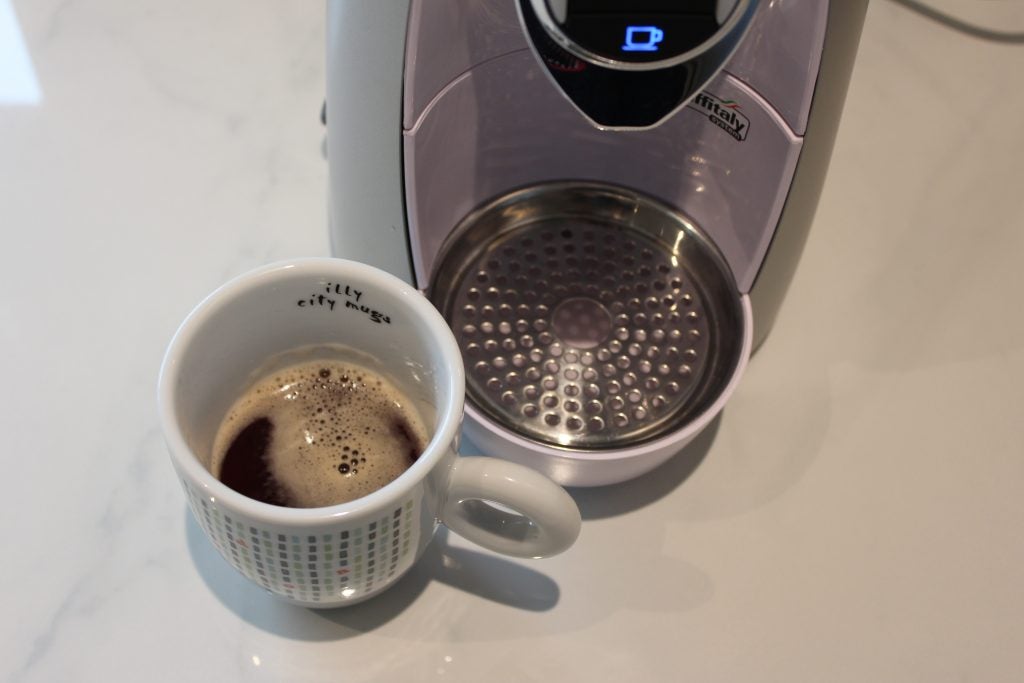 Why buy the SO4 capsule machine?

It might not be at the forefront of coffee machine design but the SO4 feels like a solid, reliable machine that’s unlikely to have many issues. It’ll need a bit more maintenance than those with dishwasher-safe removable parts and its harsh warning beep will definitely get your attention if something’s wrong, but beyond that, it’s pretty user friendly. Its compact footprint makes it a good fit for a small kitchen or even a desk, plus where it comes into its own is with a varied menu of drinks that mean non-coffee drinkers are catered for.

Great for those who like a lower tech approach to hot drinks without compromising on quality.