For the first hour or so playing Snowboard Party 2, I couldn’t quite believe just how realistic an experience it was. Here I was, spending more time with my bum up in the air and my face buried in the snow than I was upright, failing to pull off complex tricks time and again, realising that this was exactly the kind of performance I’d pull off if took to the slopes in real life, too.

I vowed to get better. To practice and practice in order to crack Snowboard Party 2’s code. Surely, if I played it enough, and got to grips with just what it had to offer, I’d be able to master the art of snowboarding to some kind of proficient degree, right? Not so.

Many hours later, it became clear that it wasn’t just my own ineptitude that was hampering my progress in Ratrod’s arena – though that certainly played its part – but rather the slightly disjointed nature of the game’s trick system. 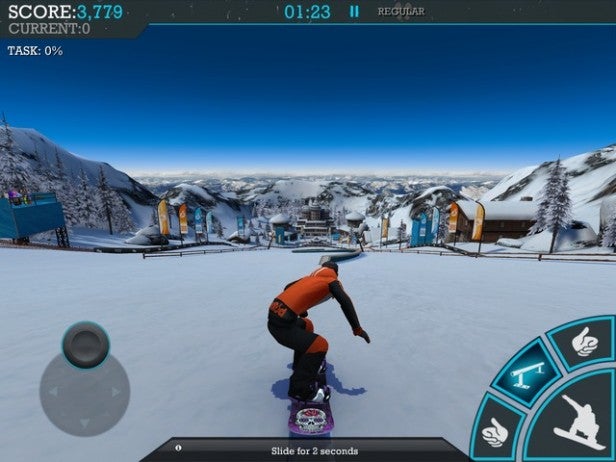 You see, in pretty much all of the game modes on offer bar Time Attack, the idea in Snowboard Party 2 is to build up speed, take to the air, and perform all manner of flips and turns and twists before landing back safely on the ground. Doing so wins you points, with multipliers on offer should you pull together a series of different tricks in one jump. Snowflakes dotted around each stage also drop thousands of bonus points onto your total, should you manage to pick them up.

The level design is solid, if not spectacular, and the graphics are certainly passable – not exactly pushing the boundaries of mobile, but not falling embarrassingly short, either. The whole thing feels dependable, safe, like a snowboarding Steady Eddie…until you actually try to pull off one of the game’s mid-air tricks, that is.

See, though you can spin mid-air simple by using Snowboard Party 2’s d-pad to twist your perspective, more points are on offer if you combine these turns with dedicated trick buttons in the bottom right. At your disposal is the ability to perform a standard jump or grab either the front or back of your board, with the act of grabbing causing you  to perform a 360 turn as you head back down towards the ground. 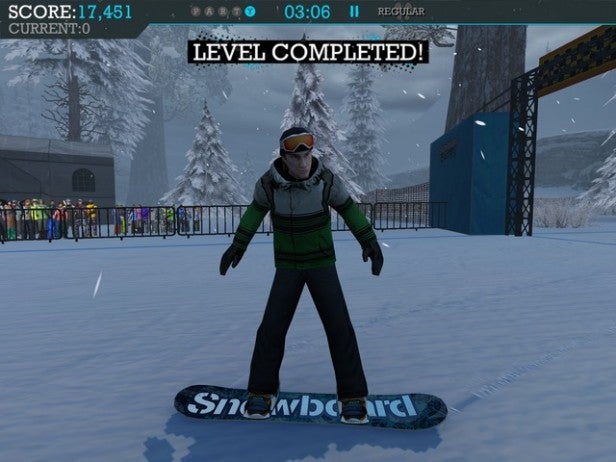 The problem is, rather than follow the standard model of holding your finger down in order to perform said trick – releasing it bringing the spectacle to an end – Snowboard Party 2 only requires you to tap the button once, with said spins going on. And on. And on. Indeed, the only way to level yourself back out is to time your landing perfectly, bringing yourself back round to a horizontal position just as you hit the ground. Get it wrong, and any points you would have amassed during the trick are wiped off.

Given each of the jumps on offer propels you skyward to an entirely different degree – much also depending on how much speed you’ve built up at the time – it’s almost impossible to know just when you should start spinning until you’ve slid down the track in question a dozen or so times. Even then, with the game letting you slide freely down what are extensive stages, it’s easy to forget where you are and just which jumps you should be attempting. 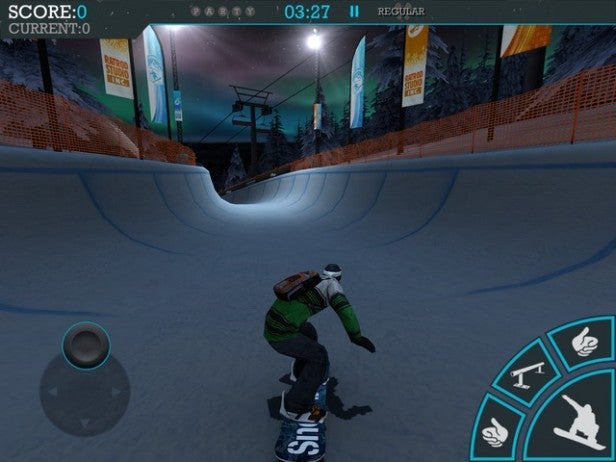 As a result, taking a restrained, rather conservative approach becomes a valid strategy, though to unlock the next track five objectives have to be met – one of which tends to be amassing the kind of mammoth score typically reserved for the big air tricks. Grinding along rails can help, but this is actually something of an impossible task until you’ve upgraded your character’s sense of balance with credit earned in play several times over – something the game fails to make clear at any stage.

What’s more, on a couple of occasions, the game didn’t register when a high score objective had not just been met, but massively surpassed, causing some unnecessary and frankly irritating replays. As such, a game that should act as a playground for your snowbound exploits instead often feels like a torture chamber, waiting to trip you up – quite literally – and hold you back at every turn.

Snowboard Party 2’s one saving grace is that, when you do manage to time a jump right, it feels immensely satisfying – though this joy is quickly short lived given you typically end up arse over head once again a few seconds later. It just feels like an ill-judged approach to the genre, and one that would be saved if the game simply gave you a little more control over your abilities and didn’t seemingly set itself up to trigger your downfall at every moment. If I wanted to feel utterly incompetent on the slopes, I’d book a trip to the Alps and take on this boarding lark for real.

Verdict
With some absolutely mammoth arenas and plenty of game modes, Snowboard Party 2 could and should be a snowy sandbox of fun. Instead, a rather dodgy approach to pulling off tricks undermines the experience and, though not wrecking it completely, creates far more frustration than the rest of the game deserves.