If you only buy one launch game for your new Nintendo Switch then make it Legend of Zelda: Breath of the Wild. If you only buy two? Well, there’s an argument that 1-2-Switch is the best showcase of the console’s Joy-Con controllers and their motion-sensing capabilities, but Snipperclips might actually be a better choice. Not only is it one of those great, ingenious little puzzle games that Nintendo seems to throw out from time to time – such as Picross or Pullblox – but it’s also one of the smartest couch co-op games around, full-stop.

The basic concept sounds strange, but in practice it’s surprisingly intuitive. Playing with a friend using the Switch’s Joy-Cons, you each take control of a funny cartoon critter shaped like the end of a test tube. You have to work together to solve puzzles on a series of 2D stages; odd little tasks such as forming a certain shape or pattern, getting a ball into a basketball hoop or through a chute, herding frogs or fishes from an entry to an exit point, or getting a pencil into a sharpener.

To do so, you have to use your bodies, standing on tiptoes, crouching down, jumping and rotating them through 360 degrees using the Joy-Con’s shoulder buttons. However, you can also snip away at each other, parts of the other body cut away wherever there’s an overlay. With a little judicious snipping, you can change your shapes to match the pattern, become hook-shaped to better tug at objects, or trim away some width to reach through a narrow gap. 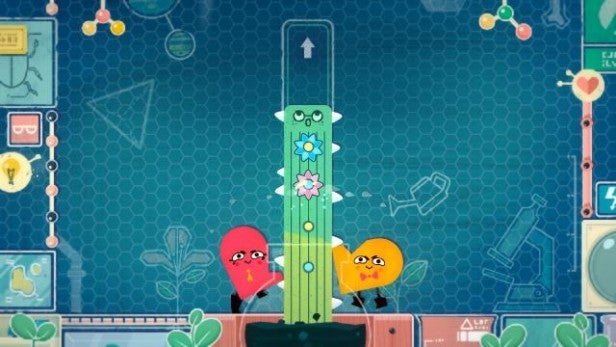 This in itself is pretty smart, but what makes Snipperclips special is that each task is testing two things: your ability to work out a solution, and your ability to work together. Sometimes you’ll fluke your way through a stage, reaching the right solution through serendipity. Other times you’ll spitball ideas, muck around and keep at it until the best approach emerges. On occasion, you’ll work it out piece by piece, chipping away at each part of the problem until you reach your goal. That’s often the easy part.

The hard part? Trying to synchronise your movements and rotations so you can move an egg into a waiting nest without dropping it or breaking it. Perfecting your timing so that, when one of you presses the button, the other is ready to jump and bounce a ball into the net.  Finding a way to work together so that a series of gigantic cogs get turned in the right direction in roughly the right order.

In fact, a whole lot of cooperative stuff that either involves two people acting together in perfect unison, or a lot of shouting, hustling, urging, nudging, explaining, giving orders and occasionally screaming in the hope that you get it right this time.

Also, a lot of hoping that the other player won’t notice that you accidentally snipped them in the wrong place at the worst time because you fumbled the controls, not to mention a spot of dodging the other player’s wrath when you drop the ball they’ve just spent the past five minutes getting into the perfect position; you rotated clockwise when you should have rotated counter-clockwise. You dolt. 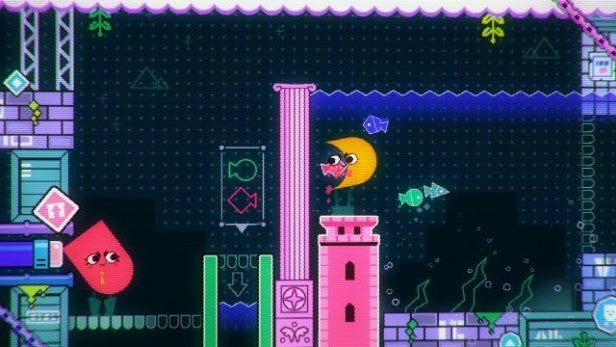 All the puzzling, frowning, hustling, shouting, arguing and recrimination becomes worthwhile when you polish off a difficult puzzle, at which point you feel like the two of you have triumphed against adversity thanks to the exceptional synergy and the mutual understanding that comes only with great friendship or true love.

And if you play it in the right mindset with the right people, it’s absolutely hilarious. This makes me hopeful that Snipperclips might make as many friendships as it breaks and reinforce as many relationships as it destroys. Frankly, it could go either way.

The risk with any puzzle game is that boredom will creep in with repetition, but Snipperclips has a nice way of continually feeding in new ideas and situations, while building on what you’ve done before to make it trickier and more mentally and technically demanding.

If you were just making shapes you might lose interest, but when you have to move objects through giant mechanisms, raise an enormous cactus or make platforms and tunnels for an 8-bit platform adventure, you remain hooked.

And while you’ll meet really challenging – even frustrating – puzzles, you’re not forced to finish every one. The stages are arranged in themed batches of 15, and you only have to polish off 10 to unlock the final, tough, multi-part effort, completing which will unlock the next set. If you really hate a certain puzzle or type of puzzle, there’s a bit of wriggle room to get around it.

Needless to say, Snipperclips won’t set any visual benchmarks, but the presentation is beautifully crisp and clean – either on the Switch’s screen or on your Full HD TV. Plus, while this isn’t an internal Nintendo production, you can see Nintendo’s oversight in the music, effects and details, from the expressions the two characters pull while they’re at work, to the silly animations that kick in when you tap a button while the stage-finished screen is rolling. Snipperclips feels imbued with a real sense of discovery and fun. 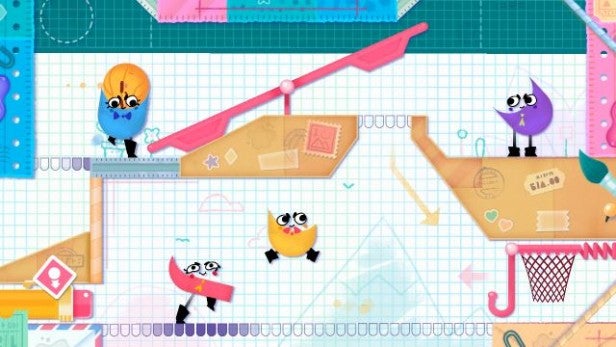 You can play Snipperclips solo, switching between the two protagonists at a tap of a button – but to be honest, it’s only half the fun, if that.

On top of that, there are two additional modes for two to four players. One is a party mode, where four critters work their way through a smaller set of puzzles; the other is a competitive mode, where you can play weird 2D variants of basketball or air hockey, or simply snip away at each other in a duel to the death. Both modes are a little lightweight, but good for a bit of post-pub or party action – or even the sort of al fresco gaming Nintendo pipes on about in its Switch ads.

Snipperclips won’t go down as the biggest or most ambitious Switch game ever, or even the one that best demonstrates the console’s features. However, it’s a game that knows what it wants to be – a smart, inventive co-op puzzle game – and does a great job of being it. Played solo it isn’t all that enjoyable, but pair up or find a foursome and you have one of the most enjoyable, if stressful, co-op games since Overcooked.