Available on Xbox 360, PS3 (version tested), PC
Sniper Elite v2 feels of a different era, and we mean that in both a good and bad way. On the bad side, its graphics feel dated, its environments lack depth or any rich interaction, and if you’re looking for the kind of cinematic presentation you might find in a Battlefield or Call of Duty, then you’re not going to find it here.

Yet, on the good side, it’s a game that harks back to the days when military shooters were about more than funnelling you through a level, blasting mindless goons as they popped into view and preparing for the next spectacular, semi-interactive cut-scene. It’s not that Sniper Elite v2 is a World War II Deus Ex, giving you a big set of tools and the freedom to use them, but it does feel different to the modern norm. It’s a slow-moving shooter that expects you to think a little about the situations you’re going into and how to play them, and where planning and improvisation actually have a minor role. 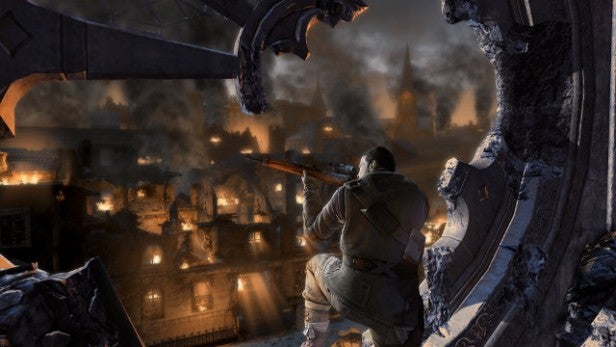 Reboot or Remake?
Some of the game’s anachronistic feel comes down to that it’s a remake of a WWII shooter that hit in the last days of the Xbox/PS2 generation. The premise is the same as the original – an OSS agent is dropped into Berlin in the last phase of WWII, with orders to either extract or kill scientists working in the Nazis’ rocket research program. The action takes place primarily in third-person, but with a first-person view for sniping, which – as you might expect – is very much the focus of the whole shebang.

While Sniper Elite v2 is a comprehensive reworking, with new locations, improved graphics and a whole lot of HD polish, it still doesn’t look or play like a game being released in mid-2012. There are points at which it all looks brilliant, as Berlin’s ruined architecture and the enhanced lighting engine combine to create impressive vistas, but up close the textures are muddy, the lighting primitive, the character models lacking in detail and the scenery a little boxy and angular. Sniper Elite v2 looks better than any PS2 or Xbox game, but playing the PS3 version it’s hard to imagine that it’s running on the same hardware as the Uncharted or Killzone titles. At times it’s horrifically ugly. 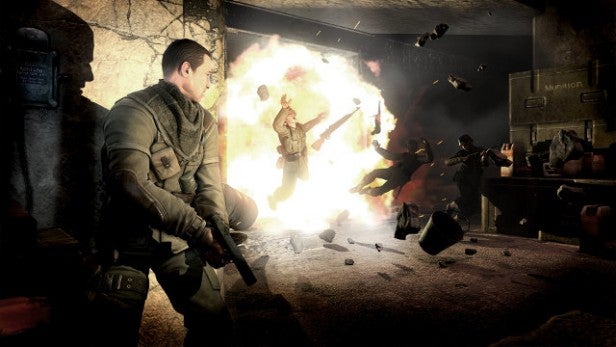 It’s also hard to ignore how limited and artificial its world seems. Full of doors that can’t be opened, small chunks of rubble that can’t be navigated and light bulbs that can’t be shot out when you need to. Meanwhile, the game’s PC origins come through in a miserly attitude to console checkpoints. Sniper Elite v2 is a reasonably challenging game where death, when it comes, often comes quickly. Having to slog through the same fifteen minute chunk of gameplay again because you didn’t reach the next objective marker gets mildly infuriating over time. 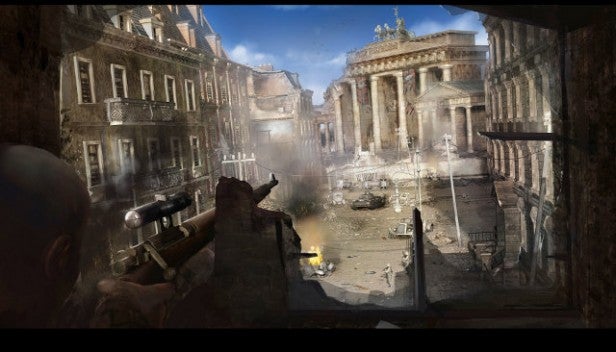 Headshot City
This might be enough to damn some other games, but Sniper Elite v2 has three big points in its favour and these are big enough and good enough to make it worth a second look.

The first is that it does a really good job of the main business: sniping. The whole game is structured around taking Nazis and Russians our from a distance, and depending on your difficulty level you’ll have to worry about movement, wind speed and the effects of gravity on your bullet as you shoot. While you have a silenced pistol to help in those parts of the game where you’re sneaking around occupied buildings and enemy bases, not to mention a machine gun for close encounters, the general rule is that you won’t last more than a few seconds in any serious firefight. Good sniping isn’t just the best option, but the only way to get through each mission in one piece.

Sniper Elite v2 is all about taking in the locale, tagging the enemy with your binoculars, then bringing them down as efficiently and quickly as possible once the shooting starts. At first it’s tough going, but with more practice you learn to lead moving targets, compensate for gravity at distance, and optimise your breathing. With a quick press of the R2 button you exhale, easing any jitter through the long-range scope, slowing movement and giving you a better chance of making the shot count. A gauge prevents you from overusing this, and the need to take each shot with care just adds to the game’s exquisite tension. 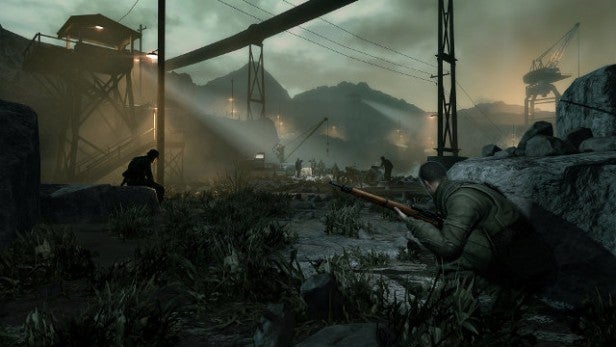 Portraits of Pain
This brings us to point number two. Sniper Elite v2 has implemented something called the X-Ray Kill-Cam. When the game thinks you’ve pulled off something nice, the view switches quickly to a cinematic shot of the bullet in flight as it bursts through skull, brain, leg, crotch or organs, with the anatomical highlights picked out in a pseudo X-ray view.

On the one hand, there’s no getting around the fact that this is a schlocky excuse to give your more adolescent gamer a cheap dose of gore. On the other hand, we’d have to admit that it’s a pretty cool cheap dose of gore, giving you a chance to relish the results of your expertise and celebrate the really quite unpleasant way you took that last target down. Sniper Elite v2 has us muttering at the screen. “Blimey, that must have hurt”. “How do you like them apples?” “I hope that taught you a valuable lesson.” Be warned: significant others might not be so amused.

But what really makes Sniper Elite v2 work is that it actually makes you think a little. The AI isn’t genius-level stuff and you’ll still find the odd guard who stands looking half-interested at his post despite the fact that his comrade’s head has just exploded like a ripe melon (in glorious X-Ray Kill-Cam-vision, of course). Most of the time, however, you have to plan ahead and think on your feet.

Work Smart, Work Fast
For instance, in many missions you’ll need to build yourself an escape route or prevent enemies from sneaking up behind you. What could be better than trip-mines, land mines and packs of dynamite you can blast from a safe distance? The more stealthy sections require a level of caution. There is some scope to escape if you’re found, but raising an alarm can still result in imminent death. The result is a game that has you thinking about how you play it, and how you tackle each battle as you come to it.

And this is the big surprise about Sniper Elite v2: after so many big, explosion-heavy blockbusters that drag you from set-piece to set-piece by the nose, this less impressive, less accomplished game is frequently more tense and more involving. We’ve mocked Sniper Elite v2. We’ve raged in frustration at Sniper Elite v2. Yet we’ve found it consistently difficult to pull away from the damn thing. It has its problems, but it also has some very powerful hooks.

Our experience of the multiplayer has been held back by a lack of people to play with on the PS3 version, but there’s a solid variation on the Horde/Firefight/Spec-Ops/Zombies mode, as you fight off wave after wave of aggressors, and this is also available as a single-player challenge mode. We also get a few additional co-op modes which see two snipers taking slightly different roles. This game is never going to be the next Call of Duty, but we’d be surprised if it didn’t build a small cult following online.

Verdict
Sniper Elite v2 sometimes looks and feels like a game from a decade ago, but if the gameplay is of an older time then it’s oddly refreshing today. While needlessly gruesome, the X-Ray Kill-Cam adds a little extra thrill to every incredible shot, and it’s great to have a shooter where not everything feels staged well in advance. A niche hit, maybe, but still a worthy buy.