Available on Xbox 360, PS3, Xbox One (version tested), PS4, PC
Sniper Elite 3 isn’t exactly polished to perfection. Graphically, it’s a classic between generations effort, slapping next-gen textures and lighting on last-gen characters and scenery, in the hope that it will still look shiny and new.

There are occasional weird glitches, and the frame rate in the Xbox One version can sink to appalling lows. Close combat encounters are laughably inept, and the AI will leave you smirking too. Personally, if I was a guard investigating a guard tower and I found a corpse draped over the side wall, I might not stand there, chill out, take in the scenery and wait calmly for someone to knife me from behind. Sniper Elite 3 is full of that kind of thing.

But here’s the thing: none of the above stops Sniper Elite 3 being the most downright enjoyable shooter you can play on a next-gen console today.

If you’re not familiar with the series – it’s hardly Call of Duty, after all – then we’re talking about a third-person WWII shooter with stealth elements and the focus on (you guessed it) sniping.

That’s reflected in Sniper Elite’s most famous/notorious feature: an X-Ray kill-cam. Line up a shot, squeeze the trigger and hit your mark, and you’re treated to a glorious slow-motion sequence following the bullet on its trajectory, the enemy’s flesh rendered semi-transparent so that you can watch the missile shatter bones and ravage vital organs as it makes its way through the body. It’s both gruesome and childishly irresistible. Trying to hit specific areas becomes a game in itself. “Ouch” you grimace, “that’s just got to hurt.”

But the X-Ray kill game is just the icing on the cake. The cake is the gameplay: now a refined, well-balanced mix of sneaking and sniping set in large, open sandbox levels. Sniper Elite 3 is set during the African campaign, which allows for a wider variety of scenarios than you might think. Mist-covered lakes, sand-covered ruins and mountains now dominate the scenery, and each environment is huge and packed with alternate paths.

After so many orchestrated, single-route shooters, playing Sniper Elite 3 is liberating. You have objectives to complete, but often no specific order in which to do them, and the game allows for a variety of approaches.

Need to take out three officers? Just tackle them in any sequence using whatever means or paths you can find. Scoot through the ruins, cause mayhem at the motor pool, sneak into a sniper’s nest and take them from a distance, or get in-close and kill them quick and quiet. In Sniper Elite 3 it’s all good. It’s not as toy-packed a sandbox as Metal Gear Solid 5: Ground Zeroes, but there’s a similar feeling of openness, and of letting you decide the way you want to play.

Admittedly, up close things can get messy. You haven’t got the huge, refilling health bar of conventional shooters, so attacks from multiple enemies frequently end in death. You have a handy silenced pistol, but it’s slow to reload and almost useless unless you get a headshot. Annoyingly, there’s no way to peek over a ledge or balustrade and take our enemies immediately below. Even the knife is really only useful from behind, and there’s no Solid Snake style grab from cover.

But then it’s not called Sniper Elite for nothing. The real way forward is to pick your spots carefully, scope out the area with your binoculars, tag enemies for later disposal, then deal with them one by one. Loud noises in the area can mask your shots, but it’s often smarter to take a shot then leave the area while the enemy is still confused.

They’ll go on alert and search the area, but while they’re doing that you can be relocating somewhere else. But why not leave them a present? A landmine or a tripwire mine nearly always does the trick. Sniper Elite 3 is a little less obsessed with traps than its predecessor, Sniper Elite v2, but they still play their part.

It’s genuinely tense, exciting stuff – and you’ll be glad of the option to save and load whenever you want. Your enemies are pretty dumb, and a little ridiculous once they return to their normal routine, but the cat and mouse action still never gets tired. Within the walls of a fort, open canyons or mountain villages it can be surprisingly hard to watch every angle, and you’ll often find yourself tripped up by a rogue trooper or an enemy sniper you didn’t expect. You’re constantly kept on your toes.

The sniping itself is great too. Ballistics play a role in all but the easiest difficulty level, and as the difficulty notches up you’ll have to cope with bullet drop, wind direction and other factors – and that’s without just holding the rifle steady. Working at full magnification you’ll have a tough time making headshots, and need to use a breathing/focus mode to slow time and get a more accurate targeting reticule.

This can’t be over-used, and the challenge of making a long-distance shot is part of what makes the gruesome visual pay-off so very satisfying. Running around affects your heart rate, and that also affects your accuracy. There’s yet another reason to play things cool and quiet. And, yes, you can still shoot Nazis (and Italian fascists) in the balls….

Technically this is the most accomplished Sniper Elite yet, but there are still problems. The ragdoll physics sometimes produces the most bizarre effects, while floating guns, jiggling corpses and disappearing foes turn up at least once per level. The switch between ‘hunting’ and ‘guarding’ modes for the enemy AI can seem really, really odd.

Plus, as we mentioned, the graphics are inconsistent. The Xbox One version has some great, detailed textures, but also some really awful low-res efforts. Draw distances are awesome, but up-close some of the scenery looks terrible. The lighting effects are sometimes hideously overblown – particularly glaring sun through narrow windows – and up-close the character models have all the humanity of 1970s Action Man. It doesn’t look bad, but it’s not anywhere near the standards set by Killzone: Shadow Fall or Battlefield 4. 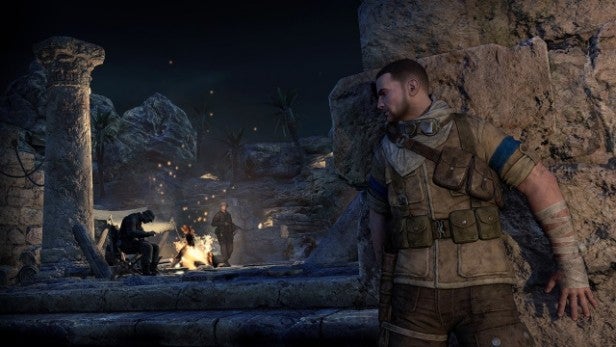 But then you have to ask yourself: would you rather have that perfect polish, or another bland single-player shooter that you’ve played through a dozen times before. Every time we’ve picked up Sniper Elite 3, we’ve spent every minute of every hour pretty much enthralled, with whole hours passing by in what you’d swear was thirty minutes. Phone calls go unanswered. Mugs of coffee go undrunk. These are good signs that you’re having fun.

Beyond the campaign, which should take you somewhere between ten to fifteen hours, depend on your skills and style of play, there’s a challenge mode where you can tackle waves of enemies, plus co-op and competitive multiplayer options. There are some interesting features here, like a co-op Overwatch mode where one player snipes while another plays spotter, but we haven’t had the chance yet to give them a spin with real live players. We’ll report back once we have.

It’s too rough around the edges for awards and higher scores, but we’d recommend Sniper Elite 3 all the same. It’s beset by bugs and some really strange AI, yet the core sneak and snipe gameplay is still enthralling, and the open levels and sandbox approach make for a refreshing departure from the shooter norm. You’ll see slicker shooters later on this year, but will they be this much fun?