Smoke and Sacrifice is simultaneously gorgeous and ugly. Set in a bleak world, where young children are sacrificed for the sake of the greater good, it’s harsh in so many ways. It’s also magnificent to look at, and a rather compelling survival game.

The premise is simple enough but quite the gut-punch. Starting out, all is well and seemingly happy. You control Sachi, a young mother with a newborn son, who she rather daringly decides to name Lio. Why daring, you ask? Well, she knows that Lio’s life is going to be short-lived. He will soon be part of a strange ritual in which firstborns are sacrificed for the sake of the village, saving them from the wrath of some super-nasty monsters. 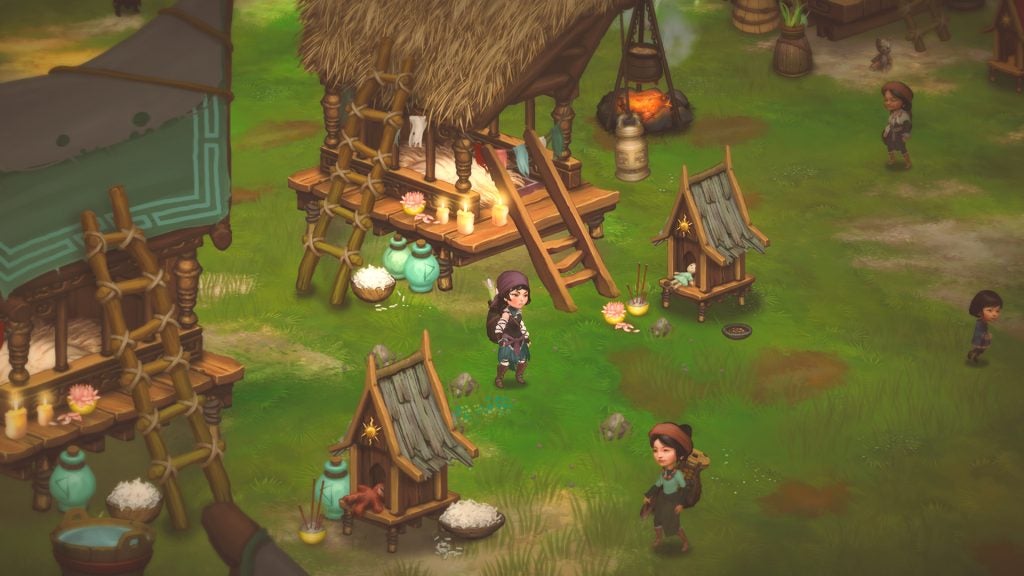 The above is played out in the first 10 minutes of the game, and you really will go from thinking, ‘oh, this is quite charming’ to ‘what the hell?’ How many games can you say cause such a stir?

Understandably Sachi is distraught, but oddly resigned to the fate. That is until the town is overrun by creatures and it becomes apparent that this method of sacrifice isn’t foolproof. Meeting up with a mysterious person, she ends up diving into the underworld in search of her missing (presumed dead) son, with a desire to figure out just what is going on.

This is what immediately separates Smoke and Sacrifice from other survival games. This game isn’t only about surviving, but also about unraveling the bleak story at its centre. Emotionally, you’ll instantly be hooked by what’s unfolding. This isn’t just about getting by any more; it’s about the love of a parent and her child.

Of course, much of this unravels in a typical survival game format. There’s a tremendous amount of busywork, but it will all come to make sense. 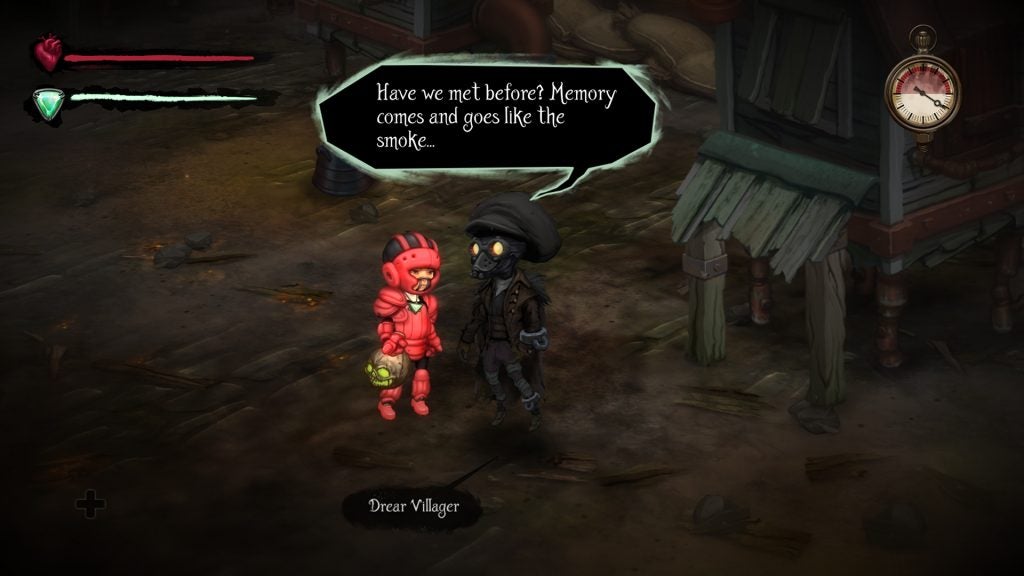 Throughout the underworld, you’ll come across many creatures that can offer you a glimmer of insight into what’s going on, whilst also providing a heads up on the kind of equipment you should be crafting.

For example, it quickly becomes apparent that smoke is dangerous. It slows you down, restricts your vision, and isn’t healthy either. You’re soon taught to construct a lantern out of a few easily acquired bits and pieces. The catch is that you need to ensnare a lantern fly that you can then place within it. Such flies can only be grabbed through the use of a net, which again needs to be constructed. It’s the perfect introduction to the game’s crafting system.

This is also a fine way of introducing you to the rest of the game. Fighting enemies is simple enough but far from a matter of simply button-mashing. Even a lowly jelly-based polyp can defeat you, how you fare will depend on how you time your attacks – but be prepared to run away once in a while.

Exploration feels reasonably open-ended, but in general is restricted by what you craft. For instance, an early ice-based area is impossible to traverse until you meet up with a creature that gives you a recipe for fur boots, which can then be crafted to help you walk across the icy terrain. 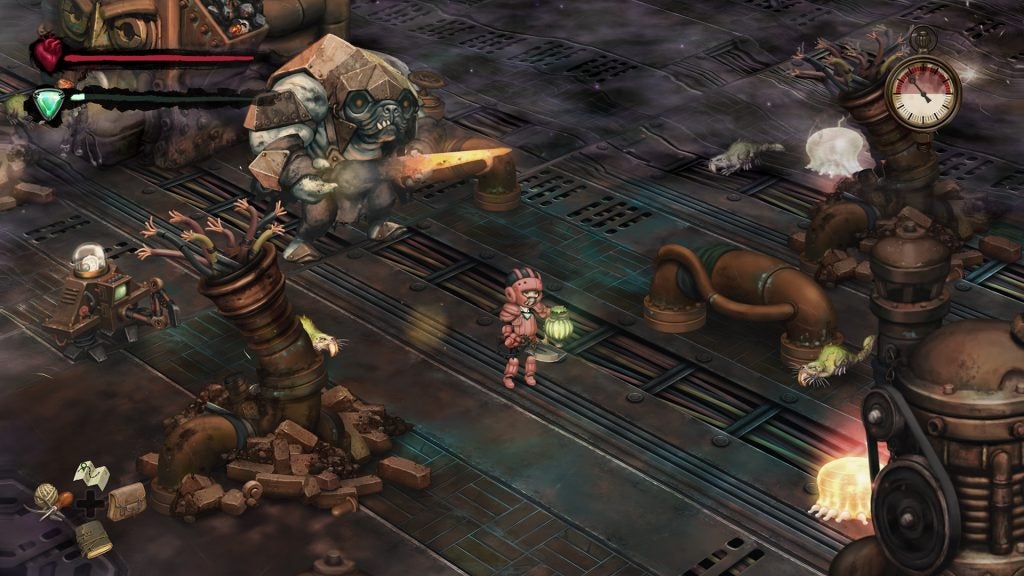 The crafting system may appear quite simplistic early on, but the options soon increase. Dozens of hours of content are available here, all with a stronger aim than simply to ‘survive’.

Starting out, you might be stuck with a simple staff with which to hit your foes. In time, however, you’ll end up with bombs, elemental swords, and other fearsome weapons.

Combat is a simple matter of one button to dodge and another to hit, but that ties well into a game that’s effectively about an ordinary person trying to accomplish an extraordinary thing. Sachi is keen for justice, but there’s no reason that she’d also be a fantastic warrior.

Also, you gradually learn that there’s more to monsters than simply defeating them. Some creatures can be milked in battle, by stunning them beforehand. Such milk can then heal you as you progress through the game. Sure, it sounds disgusting, but it’s immensely helpful when health items are hard to come by.

Traps can be laid out with the environment playing a valuable role, especially when it comes to the game’s boss battle. Taming creatures is also an option and helps greatly in making you feel less alone in this otherwise bleak landscape.

The most rewarding thing about Smoke and Sacrifice is that it never throws too much at you at once. It eases you in until additional options become intuitive to you, rather than unsettlingly varied. Sure, a lot of it is busywork and a matter of ‘complete x so you can complete y’, but it does this in a way that makes sense. 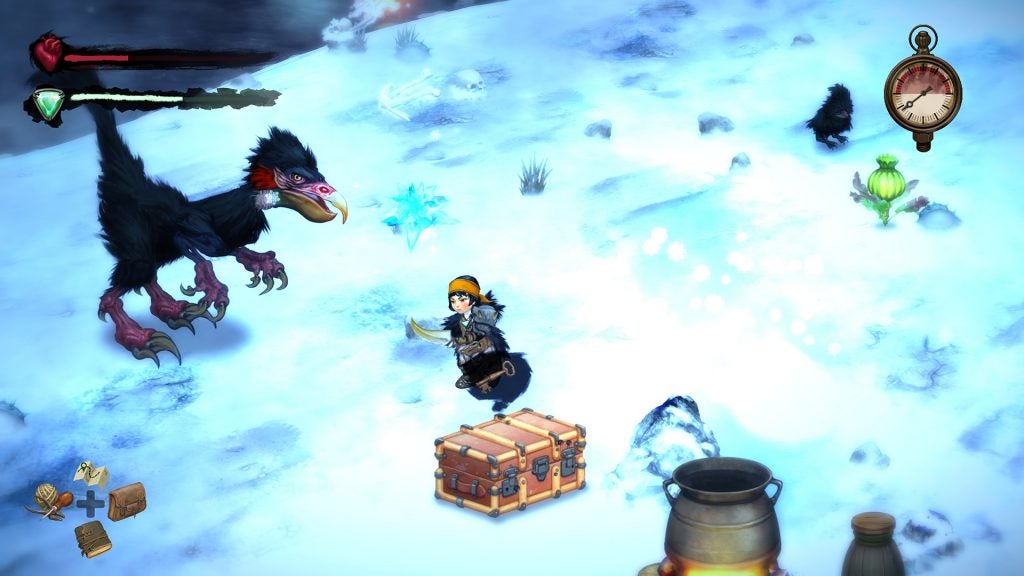 There’s always that glimmer of knowledge regarding your son, pushing you on through what could be a fairly lonely task. It’s a dark world out there, but there’s always hope – even if you’ll rarely get more assistance than a few useful words. The people in the underworld are frequently helpful but almost indifferent, as if merely accepting of one’s fate than actively as passionate as Sachi herself.

Smoke and Sacrifice is pretty tough at times. When it feels like mostly everything is out to get you and you can see enemies regenerate together, it stands to reason that this isn’t an easy game.

You save manually via save terminals, although at least with the Switch, you can stick it into sleep mode when needed. Also, on the plus side, the game pauses once you dip into the crafting menu or inventory, giving you a valuable moment to take a breath while still getting something done.

It’s also satisfying to see just how much can be crafted – so much gear and equipment can be developed through combining a few bits and pieces. It’s complex but logical, and the results are great. Besides toughening Sachi up, it makes her look pretty cool too.

Survival games were in need of a shakeup and Smoke and Sacrifice appears to be the game to do it. More than just a title of crafting and cooking, you’ll find yourself rooting for Sachi while still appreciating the satisfaction that can come from a battle for survival. This is a game that’s brimming with heart and emotion.