The Smeg SMF02 stand mixer is a handsome machine that combines ingredients quickly and efficiently. With the exception of the whisk and splashguard, its parts are dishwasher-safe. A handy, extra-long pouring chute minimises any spillages and the mixer comes with a selection of basic recipes to get you started.

The Smeg SMF02 is an update of the Smeg SMF01 stand mixer. Available in seven colours and sporting the 1950s retro look for which Smeg is known, it’s a great addition to any kitchen.

While the SMF02’s whisk struggled a little with its reach during stickier situations, overall performance was comparable with Kenwood’s kMix and KitchenAid’s Artisan mixers.

It excels at kneading and mixing batters, and features a handy, extra-long pouring chute – which means less mess in your kitchen.

Smeg SMF02 – What you need to know

Smeg SMF02 design – Attractive, with a functional bowl and splashguard

The SMF02 is reminiscent of a Zeppelin in its mixer head design. It has metallic, retro-style features and is available in black, green, pastel blue, pastel green, cream, silver and red. There’s one for every kitchen.

The dishwasher-safe stainless steel bowl has a comfortable handle. The splashguard is handwash-only, but it has an extra-long pouring chute, allowing for easy addition of ingredients.

The splashguard can be easily added or removed once your chosen tool has been attached and the mixer head lowered . This makes it simpler than the same action with the Kenwood kMix KMX76.

Although the SMF02’s splashguard doesn’t cover the whole bowl, its transparent plastic is angled to avoid any spillages. The long lip of the chute also helps to avoid anything splashing outwards.

Smeg SMF02 Features – There are 10 speeds and handy markings for particular tools, but they’re not easy to read

The speed control lever is situated on top of the machine. On one side of the lever, a shiny metallic panel features numbers 0, 1, 2, 4, 6, 8 and 10, as well as dots representing the numbers in between. 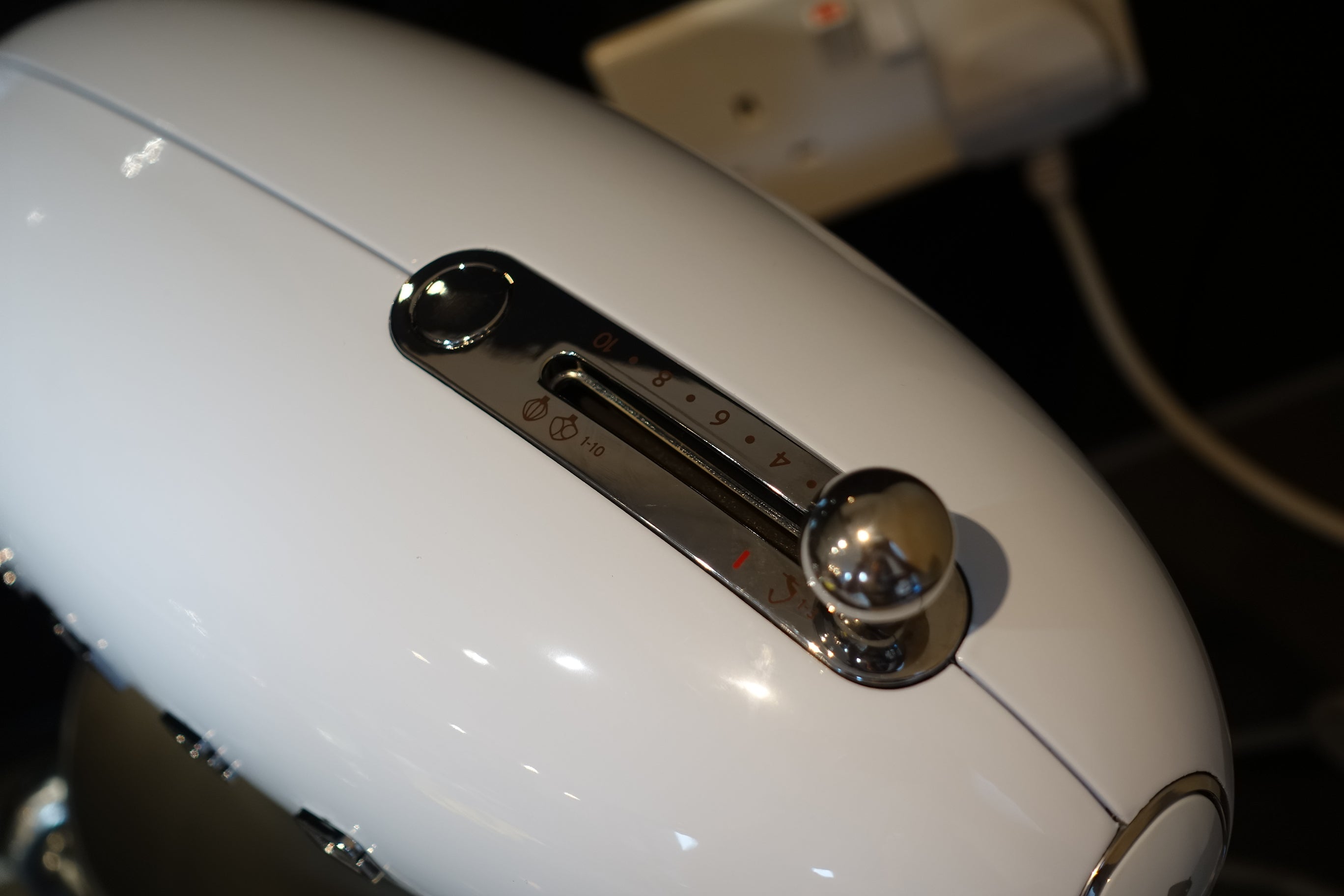 The speed control is handily located on top of the mixer

On the other side, there are images of the dough hook, with “1-3” marked next to it, as well as the whisk and beater with “1-10” next to it. A red line can be found on the opposite side of the dot that represents speed setting 3, alerting you to the maximum speed for kneading.

However, due to the extreme shine of the chrome background, those numbers are difficult to read, particularly as they’re in a dark font. It also doesn’t help to have this right at the top – I found myself occasionally having to stand on my toes to read the numbers.

The release button for lowering the mixer head is at the back of the appliance, and is consistent with the buttons found on Smeg kettles.

While I had no issues raising the mixer head, lowering it felt a little fiddly at first. The mixer head wants to be tilted back slightly further before you can press the button and bring it down. 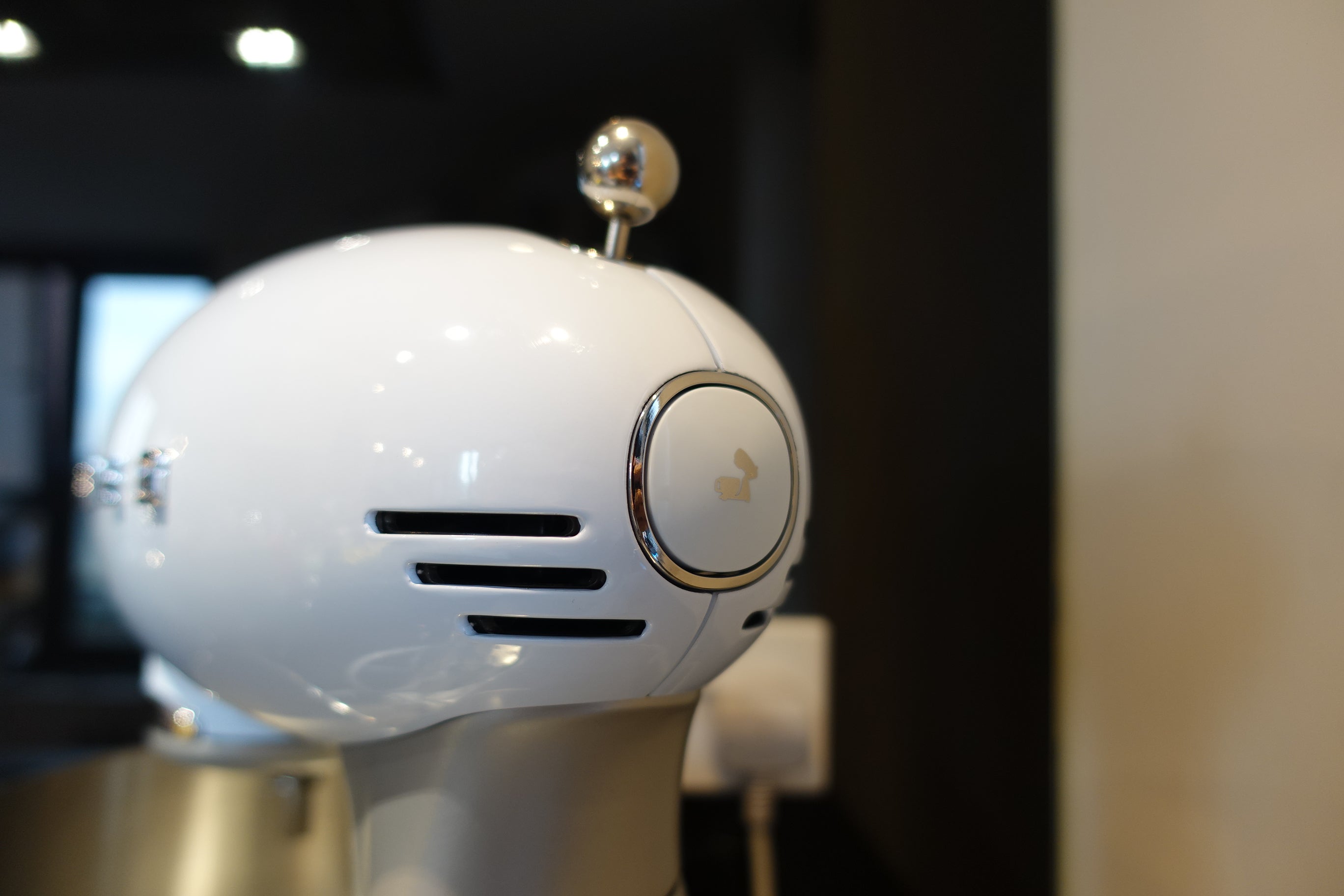 The button at the back lets you raise the mixer head

The stainless steel whisk is handy for whipping egg whites and cream. It struggled a little with a stickier mixture until cream was added, but excelled at whipping it subsequently.

The beater is useful for combining cake batters at speeds 1 to 7, as well as light stirring, or crushing smaller and softer ingredients at slower speeds.

The dough hook is handy for combining and kneading bread, pizza or pasta doughs. (Various pasta rollers and cutters that attach to the mixer are available at extra cost.)

While the aluminium beater and dough hook are dishwasher-safe, the whisk needs to be washed by hand.

The manual features visual aids, tips and recommended processing speeds, times and amounts. But, more importantly, a handful of cards with basic recipes are also included, providing some inspiration for getting started. You get some basic recipes in the box

Should I buy the Smeg SMF02 Stand Mixer?

The Smeg SMF02 is a good-looking, well-performing mixer. And while not exactly a steal, it’s more affordable than the powerful Kenwood kMix KMX76 and newer KitchenAid models, with the older KitchenAid Artisan 4.8L Stand Mixer coming in at about the same price.

However, if you like more accessories for your money, the similarly priced AEG UltraMix KM5540-U comes with an extra beater, two bowls and a fermenting lid.