What is the Smeg SJF01 Slow Juicer?

Modern design tends to be the default option for juicers. But for those who crave a more retro aesthetic, Smeg’s stunning slow juicer is sure to satisfy.

Designed to match the company’s other 50s-style products, it’s a curvy, glossy number with all the details you’d expect, from subtle but instantly recognisable branding to its coordinating colour palette of cream, black, red and pastel blue.

Its function is as flawless as its form, with an efficient 43rpm squeezing system to maximise your juice’s nutrition content, prolong its lifespan in the fridge, and minimise waste. 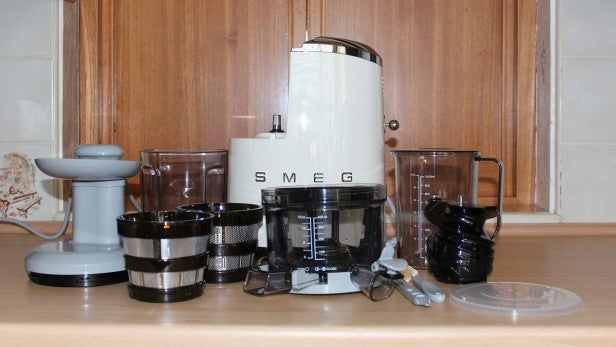 There will be no need to clear your kitchen cupboards for this slow juicer. Everything about the design marks it out as a permanent worktop resident, from its striking good looks to its ease of use, which will ensure it’s called upon on a regular basis. It’s a little weighty, at around 7.2kg, so not something you’d want to shift in and out of a cupboard.

The base unit is home to an induction motor, with a ball lever on the side to switch between juicing and reverse if food becomes stuck. A juicing unit slots neatly on top, which is composed of a hopper to feed in fruit, vegetables and nuts and a juicing bowl that can accommodate almost a pint of liquid.

Inside there’s a screw-style auger, made from durable Ultem, which squeezes out the juice, a rotating brush, and a choice of two stainless-steel strainers – fine and coarse – so you can create super-smooth or thicker juice. 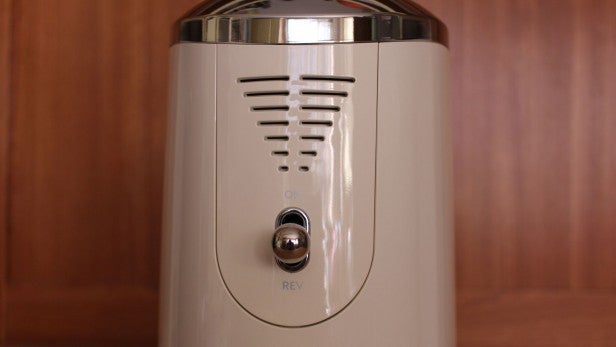 Other features sidestep common problems, such as a seal on the juice outlet to stop drips on the worktop, and a density regulator lever that helps to squeeze out the last few drops during the final stage of juicing.

As well as a pair of jugs to catch pulp (up to 1.6 litres) and juice (up to one litre), there are some thoughtful extras. These include two cleaning brushes that are ideal for removing every scrap of pulp from the strainers, and a lid for the juicing jug.

Recipe ideas are included, but several are single ingredient suggestions, so you may need a separate book to stretch your juicing horizons.

Smeg SJF01 slow juicer – What is it like to use?

Juicers can be a chore to assemble, but not the SJF01 – the manual made it clear how the machine is put together, aided by diagrams and labelling. In addition, it’s possible to assemble the juicing bowl components as a whole unit that then simply drops onto the base, with no twisting in required.

I started by making apple juice with the fine strainer in place. The hopper chute is quite narrow, presumably to regulate the size of food for preventing clogs, so some prep was still required. As well as removing the core, I cut the apple into chunks to fit.

Each one was easily processed, with three apples producing around 250ml of juice. The amount of ejected pulp was minimal and noticeably dry while inside the bowl, and only small amounts of pulp had gathered within the strainer. 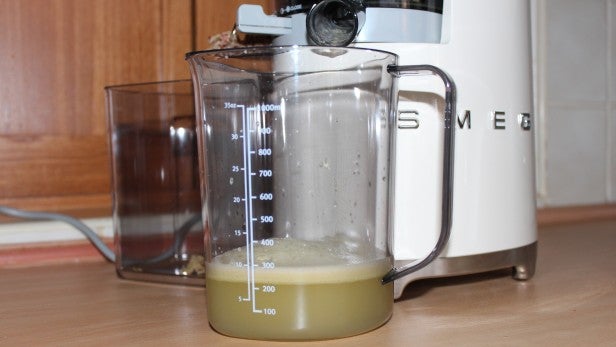 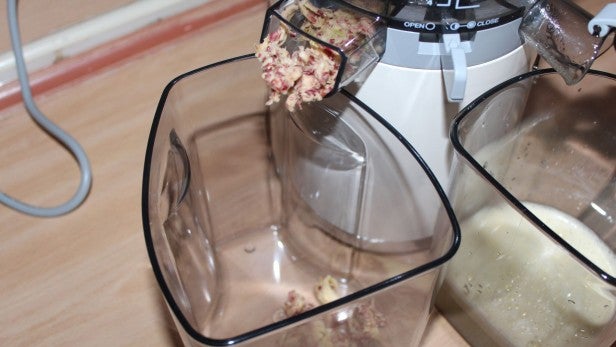 Next, I tried juicing three carrots, with the slimmer ones whole and larger ones halved. One segment became stuck during the juicing process, so the reverse function came in handy to clear it. The pusher was also useful with the harder veg. A more substantial amount of pulp was produced but still a significant amount of juice – around 130ml. 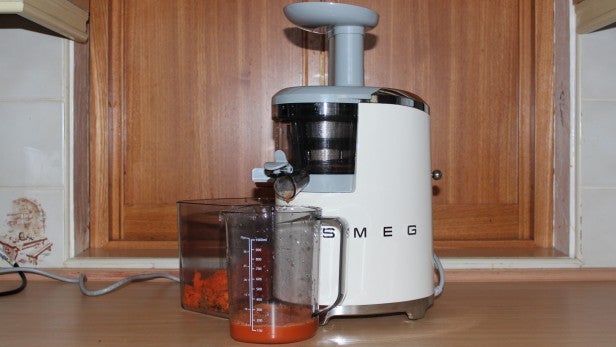 Continuing to use the fine strainer, I tried creating a green juice using kale, cucumber, banana and grapes, with the juicing spout seal in place to mix the juice while it was still in the bowl.

I added each ingredient to the chute, starting with the kale and cucumber combined to extract more juice from the leafy veg. The juice this produced was incredibly smooth and vibrantly green.

Inside the juicing bowl, there were only minute amounts of kale and grape, no visible cucumber, but there was some banana residue around the auger and on the strainer. 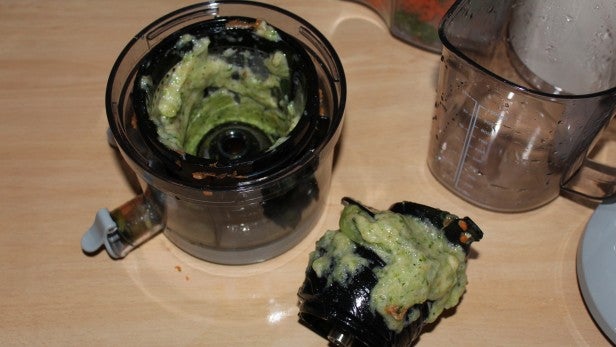 Switching to the coarse strainer, I finished by making orange juice using three peeled and quartered oranges. Each fed through easily and produced almost 300ml of thicker than average, but only slightly pulpy, juice. Inside, there was barely any orange remaining and minimal pulp again.

It wasn’t clear if the parts were dishwasher safe, but since each strainer was clogged with small amounts of pulp, it was more effective to clean by hand, especially when there were dedicated brushes for clearing it.

Each required a scrub, so it was a bit more of a labour-intensive clean-up than some. 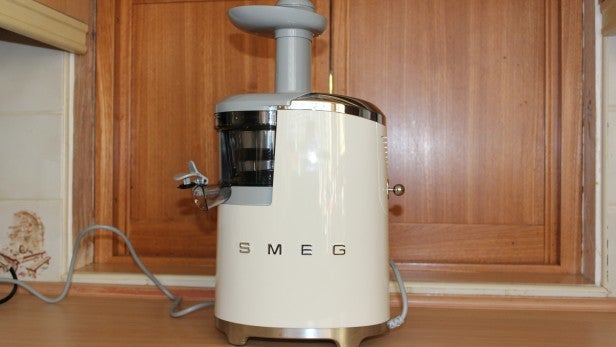 Should I buy the Smeg SJF01 Slow Juicer?

Definitely one for  juicing addicts as well as dedicated Smeg fans. Besides being stylish, it offers impressive yield when judged against comparable machines.

It’s quick despite being a “slow” juicer, it’s quiet, and its sturdy build quality will ensure years of use. Take a “buy once, buy right” approach and you won’t be disappointed. It’s pricey, but it’s worth it.

Embracing a new healthy lifestyle has never looked so stylish.