The Italian appliance maestros at Smeg have turned their ’50s-inspired design genius on espresso making – and the result is the ECF01. While it’s a manual coffee machine that will appeal to hardcore home baristas, there’s also some fiendishly clever tech beneath that curvaceous Cadillac-esque body. And it just happens to make a cracking cup o’ joe. 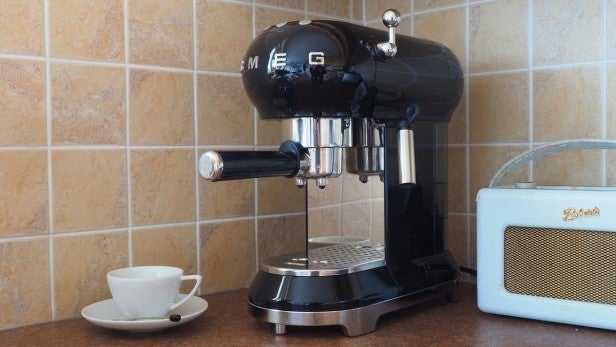 If you’ve seen any of Smeg’s larger appliances, you’ll have some idea of what to expect from the ECF01’s aesthetics. The company is wonderfully consistent in its styling, harking back to a golden age with that trademark glossy paintwork over sweeping curves, accented by shiny chrome. You could imagine Humphrey Bogart and Lauren Bacall brewing up with this thing before jumping in a T-bird and tearing to the studio – and yet it also looks wonderfully timeless.

The Smeg ECF01 is available in cream, red, blue or black – I tested the latter. And hell, does it look classy. The surface is polished to a perfect sheen and those chrome letters across the machine’s bulbous head make it look a million dollars. It feels it, too – solid and not too lightweight, despite its relatively compact footprint.

Where the Gaggia Classic looks industrial and workmanlike, as though it should be sat behind a coffee shop counter, the Smeg is a beautiful object designed for a home. OK, for a show-home in Stepford, maybe. But that doesn’t mean it skimps on practicality in any way, seemingly being a supercharged version of the DeLonghi Dedica.

Let’s start with the water reservoir, which has a 1-litre capacity. It’s completely detachable, but also has a lid that can lift off so you can refill it from the top without having to move the machine. 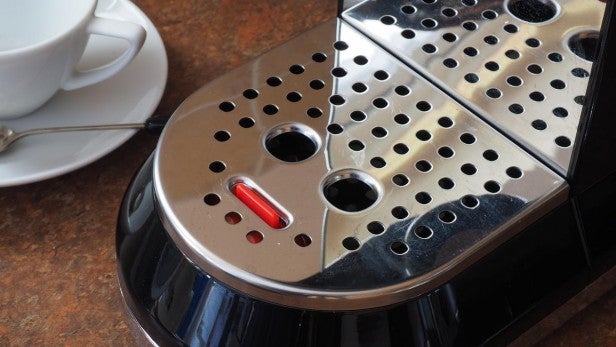 The drip tray, meanwhile, has a clever indicator to tell you when it needs emptying. Even better, the indicator is a little red tab that pops out of a slit below two little eye-like holes, making it look like a cheeky tongue sticking out of a B-movie robot’s face.

To empty the drip tray, you just lift it off. You can leave the tray off altogether if you’re using taller cups and mugs – the area underneath has been designed for just that purpose, with its own little removeable drip tray. It’s surprising how many machines require you to plonk a mug straight in the tray with the grille removed, so props to Smeg. 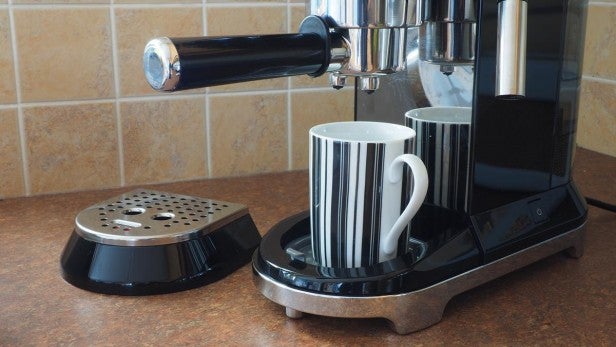 There’s also a cup-warming surface on the ECF01’s top that’s large enough for two cups, and a de-calc alarm that will let you know when the machine’s in need of a clean to keep it running optimally.

Accessories in the box are pretty standard. There are three portafilter inserts – for one cup with grounds, two cups with grounds, or an ESE pod – and a combined spoon and tamper. The tamper is just moulded plastic, but does the job. 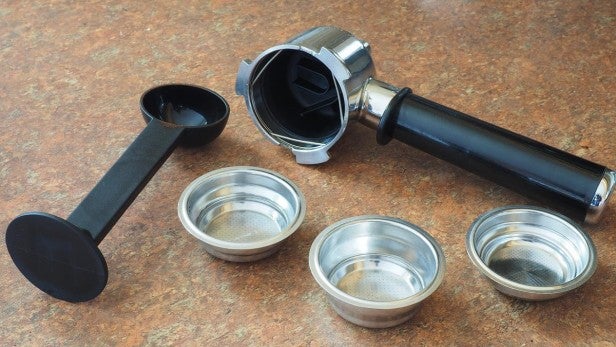 The controls are fairly minimal. There’s a power button towards the back of the right-hand side of the base, which is probably the only design misstep. It’s flush-fitted and isn’t always easy to see, feel or reach, depending on where the machine’s placed. Also on the right-hand side is a reassuringly chunky metal lever for the steam release. On the top of the machine at the front, there are LED-lit buttons for single-cup or double-cup dispensing, plus one for the steam mode. 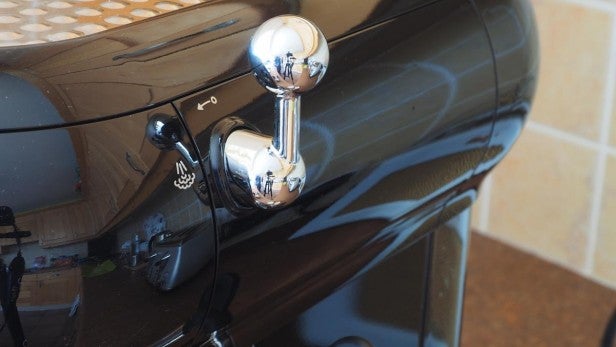 Another clever touch is that, by holding down either of the coffee buttons until you’ve filled your cup to the desired level, the ECF01 will remember to pop out exactly the same amount of coffee next time. Neat.

Internally, the Smeg ECF01 uses Thermoblock technology – not only to get up to operating temperature super-quickly, but to help it switch with minimal delay between brewing coffee and jetting out steam. After turning the machine on, the lights on its buttons only flash for a matter of seconds before steadying to signify the ECF01 is ready for action. No, really – it takes seconds, not minutes. About 40 seconds to reach operating temperature is just astonishing. 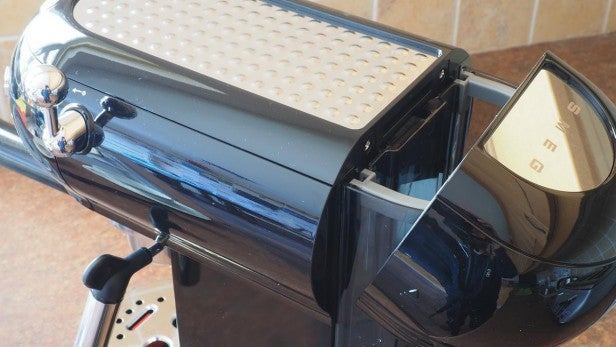 Starting with a simple double espresso, the dark stuff started pouring within moments of pressing the button. This thing is seriously speedy. It’s not terribly loud either.

With no need for tamping perfectionism, the ECF01 produces a beautifully rich crema with astounding consistency. It’s easily as good as the Gaggia Classic in this regard, which has long been a class leader at this price point for manual machines.

The taste from my test coffee grounds had just the right blend of velvety bitterness. Super-fast and super-tasty – I had absolutely no complaints. It left hardly any grounds up in the machine, too, so clean-up was minimal.

Moving onto a latte, the transition to steam use is, again, so fast. Just press the steam button, and a few seconds later you’re ready to swing the nozzle into a milk-filled metal container and flick that lever forward. Having frothed the milk, given it a little circular swishing and tapped it down on the work surface, I had a perfectly glossy, smooth finish. The resulting latte was beyond reproach. 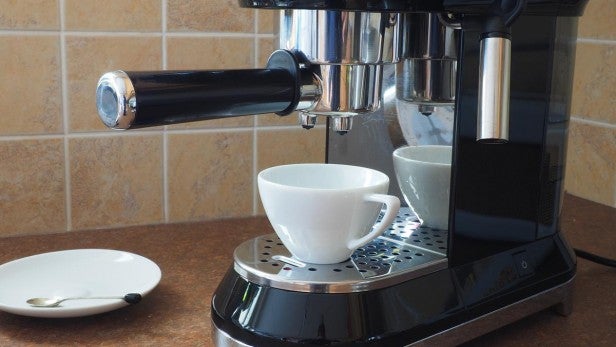 Should I buy the Smeg ECF01?

Whether you go all gooey over the swoopy curves and dripping chrome or not, there’s no denying the brilliance of the Smeg ECF01’s features, build quality and performance. This is an outrageously good manual machine.

The venerable Gaggia Classic has a more industrial design and produces equally great coffee, but it’s slower to heat and isn’t ideal for taller cups. The similar DeLonghi Dedica manages the same levels of performance without the jawdropping looks and superior build quality of the Smeg, and we had a few issues with that model’s boiler.

The FrancisFrancis X1 and KitchenAid Artisan Espresso Machine both offer retro-chic styling to rival the ECF01’s, but are far slower, more expensive and space-hogging, and lack all the Smeg’s clever touches.

If you want an espresso machine that’s prettier, faster and more practical than most, the Smeg is easily worth the money.

A gorgeous espresso machine that’s super-quick and packed to the drip tray with smart features.