This year sees Skype casting off its PC shackles as a number of vendors release Wi-Fi Skype-enabled phones. The concept is simple enough as this new breed of mobile incorporates a wireless client and the Skype software allowing you to log on to the Internet from available access points and make and receive phone calls without going near a PC.


SMC’s is one of the first to market and its WSKP100 looks smart enough with its Apple-style white plastic front cover. Build quality is reassuringly solid although it would have been nice if the kit included a pouch to protect its good looks. The 1.8in colour LCD panel has a 128 x 160 pixel resolution which combined with a decent backlight makes it clear enough to see in most conditions. In the phone’s base is a socket for charging the battery and SMC supplies a small mains transformer and USB cable. Next door is a headphone socket and the kit includes a single earpiece and microphone cable. Both ports are protected by small rubber covers and the only other external control is a volume rocker switch on the side of the case. 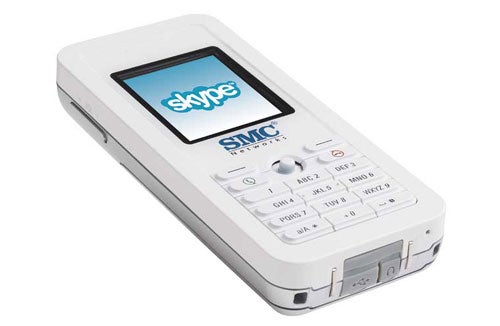 It took a little while to get used to the keypad although it doesn’t lend itself terribly well to one hand operations and the blue backlight doesn’t make it easy to see the keys in the dark. We did like the little navigation joystick as this, combined with the soft keys on either side made light work of moving through the menu options. The WSKP100 has an 802.11b/g wireless client and supports 64/128-bit WEP and WPA/WPA2 encryption. Once the battery has been fully charged which takes around eight hours you can switch the phone on whereupon it takes you through a simple setup procedure. Select your language, agree to Skype’s terms and conditions and then move on to scanning for any available access point. Bear in mind that you won’t be able to use wireless hot-spots that employ a web browser portal as the phone can’t run one.


The phone displays all discovered access points along with details on any security. Use the joystick to scroll down and select one and, if required, enter a network key. We started off with a connection to an open wireless access point and were then taken to the Skype account setup phase. If you already have an account just enter your username and password but if not then the phone can set one up for you. We opted for the latter and the process only took a couple of minutes. Once you’ve registered it would be advisable to access your new Skype account and top it up as we were generously given 0.09 euros of free calls after our account had been created.

The phone display shows whether you’re logged on to an access point, the signal strength, battery state, the time and the amount of credit left in your Skype account. You can set the phone to automatically log on to the nearest open wireless access point although with many businesses and home users still not savvy on security we’re not sure this is a wise move. From the Settings menu you can initiate a search for networks in range and pick one from the list to connect to. We tested this on an access point with WPA encryption activated and after entering the network key we were online and ready to go. When the phone displays the window for the network key it’ll also tell you what type of encryption is in force. 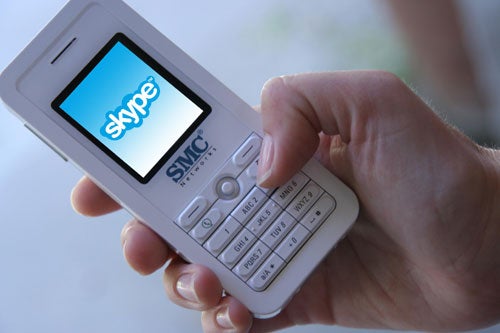 During testing we found the WSKP100 easy enough to use although call quality wasn’t overly impressive. With outgoing calls we could hear the recipients reasonably well but they complained of a disconcerting echo at their end which, bizarrely, was almost eradicated when we fitted the earpiece and microphone jack. However, with this in place we found that it reduced volume levels enough to make it difficult for us to hear the other person. The volume control on the side also didn’t have any significant impact. For the ringer you can choose from three rather silly tones which also aren’t loud enough to be heard easily in public places although you do have a vibration option as well.


The phone maintains a contact list which can be accessed directly from the home display. New contacts are easy enough to add and can be done manually or simply by asking for the current number dialed to be added. You can conduct a full search of the Skype service for users and email addresses. These results can be added to your contact list but only after Skype sends a request to the selected users where they either permit or deny the request. There’s plenty more to play with as you can check on your SkypeIn and Skype VoiceMail services if you’ve purchased them, modify your public and private Skype profile, divert and forward calls and send Skype voicemail to other users.


The Skype mobile is a smart idea but although we found SMC’s solution easy enough to use, call quality is distinctly average and the features list is somewhat limited considering the price.