For many years SMC has resolutely resisted the temptation to move into the home and small business network storage market but its iron will has finally broken. It signifies this with the launch of a single appliance, which it offers either as an empty box (the SMCNAS04) or with a quartet of hot-swap 250GB SATA hard disks and we have the latter on review.


Our first impressions of the TigerStore are very favourable as this sleek white box is well constructed and its clinical white lines make it stand out from a sea of bland boxes. The smoked plastic front panel enables you to see the status LEDs on the disk carriers behind and it incorporates a power button to one side. More LEDs are provided below this and these reveal the status and negotiated speed of the four Gigabit Ethernet ports at the rear plus the status of the RAID array. Usefully, the door can be locked to prevent access to the drives.


The TigerStore supports options for JBODs, mirrors, stripes, RAID-4 and RAID-5 arrays and defaults to the latter. BIG arrays a

re slated as a future feature although we can’t see any major benefits to these. Called concatenation, the drive capacities are simply joined back to back to create one big drive. The main advantage of BIG is it enables you to use drives of different capacities in an array without losing any storage. However, no performance benefits are to be had and no fault tolerance is possible as if a drive fails you’ll lose all the data on it and probably have trouble getting some data off the remaining drives.


Installation is helped along nicely by the bundled Java-based Discovery Utility, which locates the appliance on the network and presents it ready for configuration. Usefully, it also offers the option to map a share to a local drive letter. The web interface is a tidy affair, which opens with a status readout of the appliance and a list below of active shared folders, connected users and the time they logged in at.


Access security is limited to local users and groups as unlike appliances such as Netgear’s ReadyNAS NV, SMC doesn’t offer integration with NT Domain or Active Directory authentication. The appliance currently only supports access to shares over CIFS/SMB – NFS is a future option and although this is present in the user creation menu it’s greyed out. FTP access is also on offer enabling users to access their own personal folder. Quotas are supported and two parameters needs to be entered as you set the total global quota space available and within this you can then limit the amount of space individual users can consume.


It’s good to see SMC has added an iTunes server service and this provides a default Media folder where you import all your tunes too. A Media Server feature is provided where you can specify the scan path on the appliance, decide which file extensions are to be made available to devices and start a media scan. You also get a DownloadStation tool which is similar to that provided in QNAP’s TS-109 although SMC only supports BitTorrent transfers and not HTTP and FTP.


Real world performance over Gigabit Ethernet is very respectable as copying a 690MB video file to and from the appliance returned average write and read speeds of 20MB/sec and 27.6MB/sec respectively. FTP performance using the FileZilla utility was a mixed bag as copying the same file from the appliance delivered a storming 34.5MB/sec but copying it back saw average write speeds drop to around 5MB/sec. 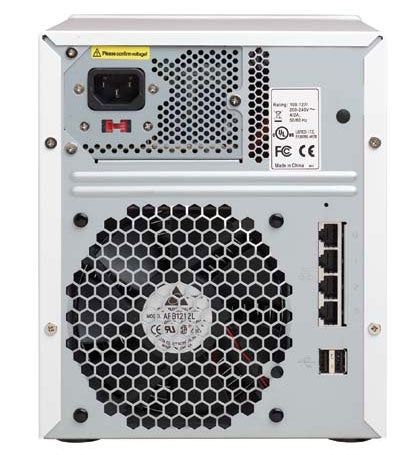 Using the default RAID-5 array we also tested the hot-swap capabilities by pulling a drive to simulate a failure. Returning the hard disk started an automatic rebuild but take a day’s holiday if you plan on watching it as we clocked this at over 18 hours. If you want to change the current RAID array you use the Back to Zero Disk menu option to clear the current configuration. This will also wipe the firmware requiring a fresh installation where you choose a new array from the Discovery utility.


Workstation backup is handled by the bundled Backup Master utility, which secures selected files on your PC to the appliance at regular intervals and during this process you can encrypt and compress them. It also creates multiple restore points enabling you to restore older file versions. The appliance has three USB 2.0 ports with two at the rear and one at the side, which support storage devices and printers. Insert a USB storage device causes it to appear in the shared folder list but you’ll need to assign access rights before anyone can use it. You can also backup the contents of a USB device to a default folder on the appliance but this must be run manually from the Advanced menu.


SMC delivers a nicely built NAS appliance at a reasonable price. The documentation could be more informative and it does come up well short of features when compared with the likes of Buffalo, NetGear, Synology and QNAP but performance is a cut above the rest

(centre)”’The appliance runs an iTunes server which only worked properly with the very latest firmware.”’

(centre)”’You can choose a new RAID array which will initiate a fresh installation of the operating system.”’(/centre)

(centre)”’Quota management is useful if you want to limit the amount of storage available to users.”’(/centre)