With caution as its middle name, SMC Networks has waited for all the dust raised from the draft 802.11n debacle to settle before poking its head above the ramparts. Some six months after the big names such as Netgear, D-Link and Linksys have brought draft-n wireless routers to market SMC finally delivers with the SMCWBR14-N.


This is the first in its new Barricade N product range and reveals a new design direction as SMC moves away from the chunky Barricade-g boxes to a slimmed down and extremely lightweight silver plastic chassis. At the top of the features list is the draft 802.11n wireless access point which SMC claims supports speeds up to 300Mbps – more on that later. It comes with the standard quartet of switched Fast Ethernet ports which is disappointing as these will create a bottleneck. With this hardware setup it’s impossible to achieve speeds higher than 100Mbps between WLAN and LAN systems. The time is ripe to start equipping routers with Gigabit Ethernet as it’s cheap enough to be a feasible option for home users and small businesses – virtually all PCs now have an embedded Gigabit port anyway. 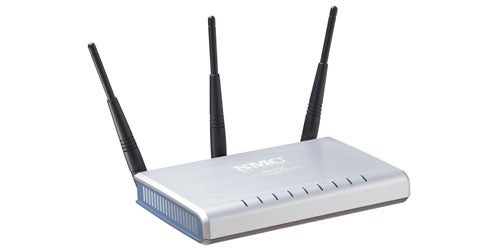 The router comes with an RJ-45 WAN port so you’ll need an external cable or ADSL modem with an Ethernet port. We asked SMC when a version with an integral ADSL modem would be available and it advised us it plans to release one in the next month or so. A useful feature is the small switch at the rear which allows you to physically disable the wireless access point. Plenty of indicators are provided at the front with status LEDs for the unit, LAN and WAN ports and the wireless access point.


No installation utilities are provided but none are needed as the router’s management interface provides plenty of wizard-based assistance for setting up Internet and wireless access. The latter commendably kicks off by recommending you change the administrative password and then takes you through picking from DHCP, PPPoE, PPTP, L2TP or static addressing for your Internet link. You do get a bunch of predefined ISPs to pick from but there’s nary a single UK provider among them.


The wireless wizard is quite slick as it asks for an SSID and offers choices of Good, Better or Best modes for security which equates to WEP, WPA or WPA2 encryption. There’s more for security as moving on to the main wireless configuration page allows you to set SSID masking and activate the WPA-Enterprise option which requires a RADIUS server to authenticate users to the router.

For wireless performance SMC joins the long list of vendors that claim 300Mbps but come up well short of the mark. To test this we installed SMC’s SMCWCB-N PC Card in a 1.6GHz Fujitsu Siemens notebook running Windows XP SP2. Running the Iometer utility over a close range open link to a Supermicro Pentium D 3.2GHz PC on the LAN saw an average raw read throughput of 70Mbps which dropped to 69Mbps with WPA2 encryption enabled. Real world speeds were similarly disappointing with a 690MB video file copied from the laptop to the PC at a rate of 48Mbps over an open link and 44Mbps with encryption switched on. Signal strength also took a nose dive as distance increased, with the PC Card utility showing this dropping by around fifty per cent with the laptop on the floor below the router. 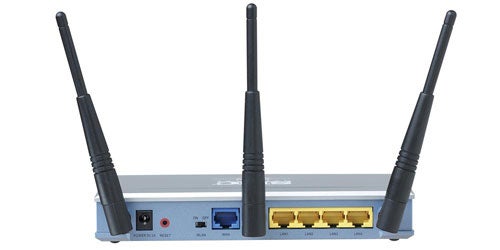 The router’s web management interface is nicely designed and very easy to use although after browsing through the various features of the Barricade N it soon becomes clear that these are remarkably similar to D-Link’s DIR-655. Both provide the usual NAT/SPI combo for firewall protection and include a pile of ALGs (application layer gateways) to allow services such as IPsec VPNs and VoIP to function with NAT. We tested the latter using our SIP account and had no problems making and receiving calls through the router. It also supports a single DMZ (demilitarised zone) allowing one system designated by its IP address to step outside the firewall for full access from the Internet.


You get the same StreamEngine facility which automatically measures available Internet bandwidth and identifies and prioritises gaming applications over standard web traffic. Access controls are identical as you can also create a list of web site addresses and use policies that determine what your LAN and wireless systems are allowed to access on the Internet and when. For those that want strict parental controls this is a lot more useful than Netgear’s URL blocking list as it allows you to decide what can be accessed rather than what can’t. You can also set up policies that block all Internet access for selected systems during specific periods of each day.


For router security features there’s little between SMC and D-Link’s DIR-655 but the latter’s Gigabit ports make it look a far better deal – especially as it only costs a few pounds more. Wireless performance is in the same ball park but SMC is only worth considering if you don’t want Gigabit on the LAN.

The router can prioritise gaming traffic and automatically measure your broadband connection.

There’s more than a few similarities between SMC and D-Link’s DIR-655 router.

SMC’s web access controls are a cut above the rest as you can apply white lists of URLs.

The PC Card utility is easy enough to use but the displayed connection speed is pure fantasy.