As gamers, there are three things we’re all conditioned to do from a very young age; watch out for spikes, collect coins or rings, and try to avoid being squashed.

All three are platforming staples and, whether you’re talking the 1980s, 1990s, or right up to the present day, whole leagues of classic games have been built around each one of them, usually at the same time. So ingrained in our psyche are they, too, that when a game comes along that charges us with flouting one of these rules, it stands out by a mile.

Smash Jungle is one such title. Rather than setting out to avoid being flattened, the game charges you with ridding the jungle of its pesky wildlife, slamming down a big, scary stone to squish the flurry of creature scampering across the ground below. What’s more – and, animal lovers should look away now – it’s an incredibly satisfying process.

The game’s controls are especially simple. Holding your finger down on the screen causes the stone to be hoisted skywards, with it slamming back down to earth as soon as you release contact. The trick, therefore, is to get used to the pace of movement in either direction, enabling you to flatten the furry folk below in an almost rhythmic fashion. As the level progresses, so the animals on the jungle floor begin to dart across it at different times and at varying speeds, giving your reactions a good going over. 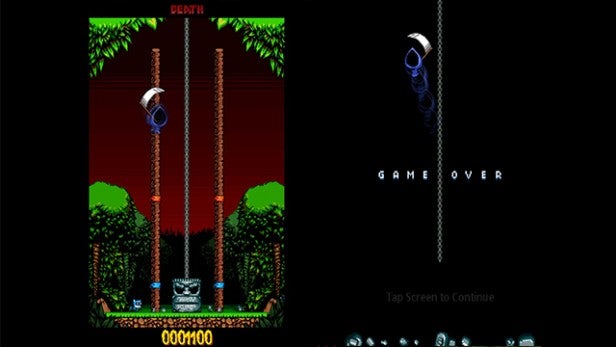 And this is why, like many other mobile masters – Flappy Bird, Canabalt and Jetpack Joyride all springing to mind – your game could roll on for several minutes, or be over in a matter of seconds.

The trick to Smash Jungle isn’t just one of timing, but also one of selection. While the majority of the animals on the jungle floor are your targets – raccoons, frogs, snakes and, indeed, even birds flying in the sky – porcupines are to be avoided, as are the bombs that are thrown into play in random fashion. Contact with either of these two will take a big chunk out of your health bar, which is eroded naturally as the seconds pass anyway.

Indeed, with Smash Jungle serving as something of a scoreboard chaser, your demise is inevitable – it’s just a question of when, not if. Smashing down on your furry foe temporarily recharges your health, but it only takes a collection of miss-timed smashes or bomb explosions to erase any health you have left. It’s at this point, however, that Smash Jungle gets really interesting.

Rather than just flashing up a Game Over screen when your health hits zero, Smash Jungle ups the ante by making death a very visual affair. At the top of the screen appears the man himself – Death – his figure shrouded in a purple cape and with his trademark sickle in hand. With each second that passes he darts further and further down towards your position, ready to cut your chord and end your run. String together a few sharp smashes in quick succession, however, and your HP will force him back skywards, or even clear him entirely. 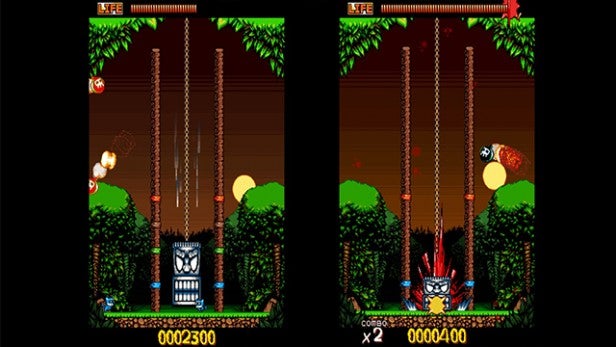 This is, in short, what Smash Jungle is all about: precision under pressure. From the moment you start a game, your time in play is indefinitely limited, yet your determination to stay alive causes you to try and extend your stay for as long as possible, lifting your stone up and slamming him back down again like a car weaving through traffic.

Like all the best arcade games, Smash Jungle has the ability to trick you into thinking you’ll do better next time – that you might as well have another quick go to beat your score. It’s the instant nature of play – and the equally instant way in which it can swiftly come to an end – that gives Smash Jungle its appeal; cheating Death and staying alive for just a few more seconds has rarely felt this satisfying, so much so that you’ll almost will his appearance on screen, just to add some extra excitement.

Even more gratifying, however, are the playful whimpers that greet every successful smash, as well as the splash of blood that temporarily stains the screen. For once it feels great to play the ‘bad guy’, ridding the world of the cute and cuddly creatures we’re typically trained to protect.

Verdict
As instantly appealing at the likes of Flappy Bird but with a touch more death, Smash Jungle is the very definition of a “just one more go” mobile master, adding a pulsating sense of tension to what is already a superb smash ‘n’ splat fiesta.