A smart connected kettle with lots of handy features, but you’ll want to use a voice assistant to get the most out of it.

If you want to unlock a whole new level of lazy – sorry, ‘home automation’ – then the Smarter iKettle 3.0 might well be the kettle for you. At around £99.99, it’s expensive as far as kettles go. However, featuring Alexa and Google Assistant integration, its connected capabilities go some way to justifying the cost to those who want the added convenience and ‘wow’ factor of a connected kettle.

Other returning features include its ability to keep water warm, help prepare baby formula and customise the water temperature for speciality teas, all controlled through the companion iOS and Android apps.

If you’d like to be able to start preparing your morning cuppa from the comfort of your bed, the Smarter iKettle 3.0 is a feature-rich appliance with only a few annoyances.

The design of this jug kettle hasn’t changed much from the previous generation Smarter iKettle 2.0. It’s still brushed stainless steel sat atop a chunky base.

This base contains a weighing scale through which it’s able to judge the kettle’s water content, and reports back to the app. However, one of my main frustrations with the minimalist design is the lack of float or transparent window, which means there’s no clue on the exterior about how much water is contained inside.

The only way to figure this out is to consult the app, which isn’t convenient if you’re hoping to have Alexa or Google Assistant as your primary control method. You’ll also need to get used to re-filling the kettle between uses. Note that it’s good to get into a routine of adding just enough water for your next boil if you don’t want to waste energy, even if there’s a temptation to keep it topped up all the way. 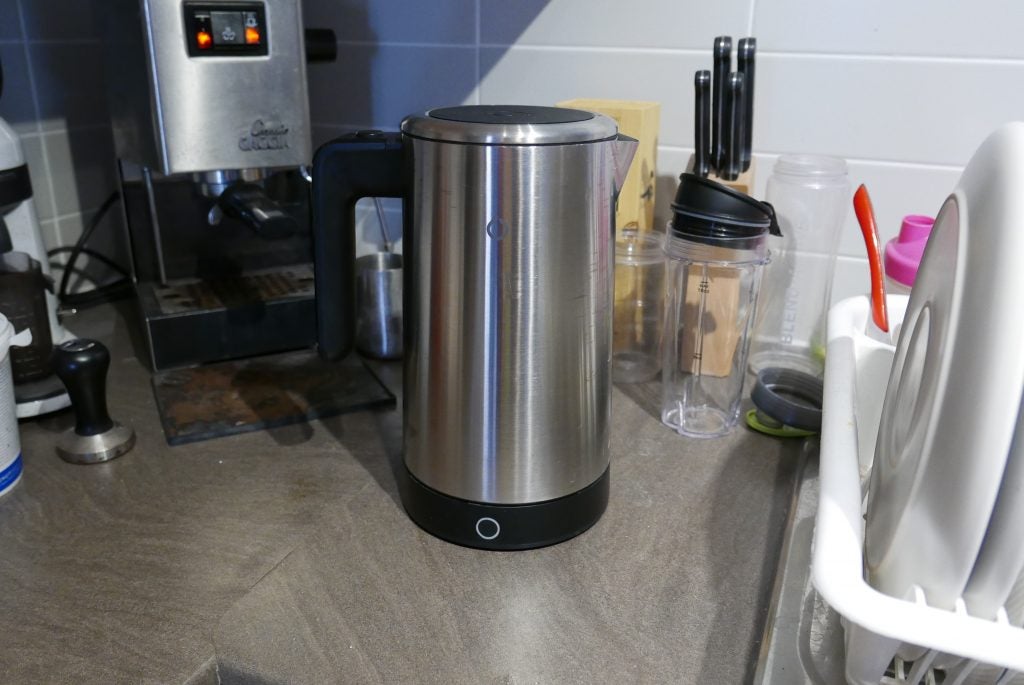 For manual controls, there’s an illuminated button in the base that you can press to boil at the default quick settings you determine in the app. Otherwise, you’ll want to use the iOS or Android app to set up the kettle and connect it to your wireless network.

Be sure to download the Smarter 3.0 app, not the one listed in the instruction manual, since that’s actually the old app that’s only compatible with the older iKettle models. 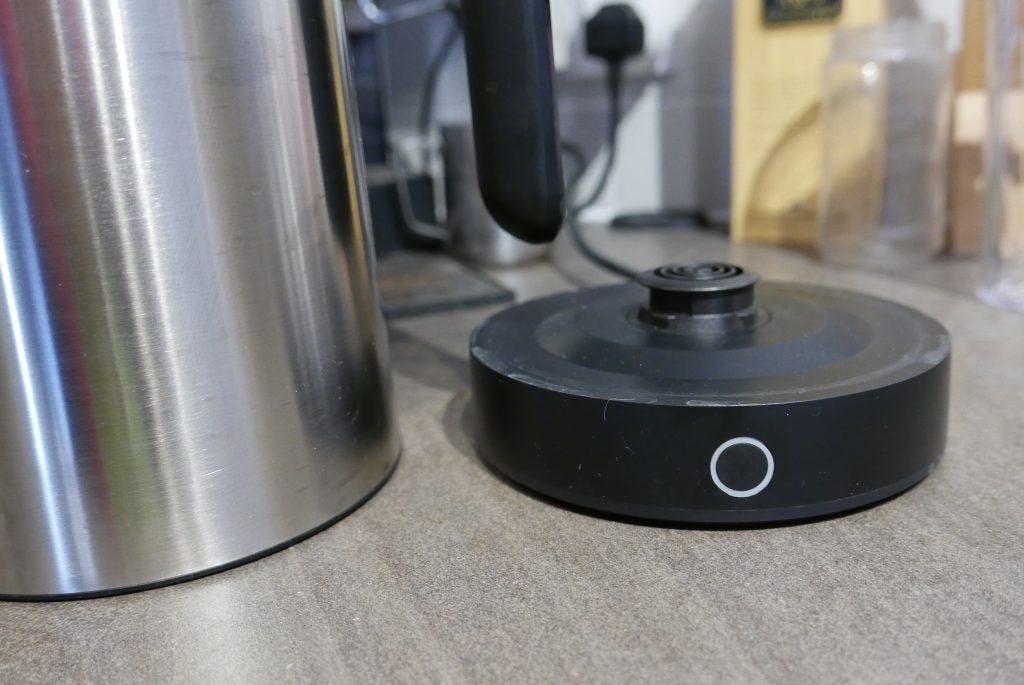 The iKettle 3.0 uses something called BlinkUP to transfer your wireless network details to the kettle’s base. On its underside is a sensor that can detect the flashes of your smartphone to determine the correct settings – a bit like fancy morse code. Simply tap your network settings into the app, after which it will ask you to hold your screen against the sensor on the base.

My first attempt didn’t work, but the second managed to get the iKettle 3.0 onto my wireless network and appearing in the app.

The app isn’t the cleanest, in the sense that it assumes people will be setting up multiple Smarter-branded connected appliances – the company has a connected coffee machine in its product lineup – in multiple locations such as at home and in the office. As such, you’ll need to create a ‘Home’ or relevant location and assign your iKettle 3.0.

So, on firing up the app you first need to select the location and then the appliance, before you’re at the screen necessary to begin using the kettle. It’s a minor frustration – one that could so easily be improved. 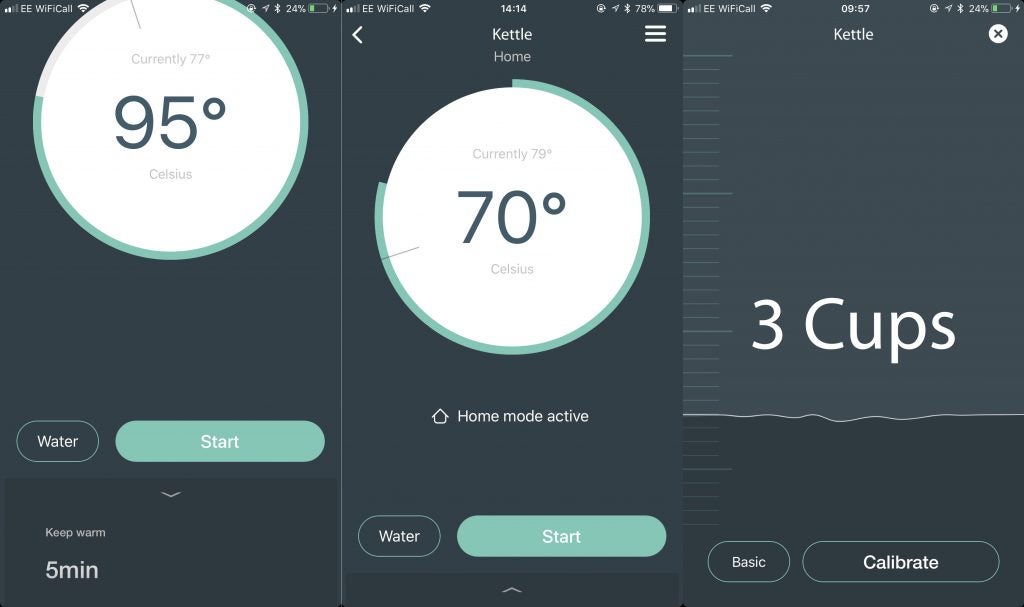 Once you’re at the control screen, it’s simple enough. Using a rotary dial you can set the temperature, and the circumference of the circle fills up to display the kettle’s current temperature. A start/stop button at the bottom can turn on the kettle. Beside that is the ‘Water’ button, which lets you view the kettle’s current water volume. You can toggle between a basic mode, which gives you a low, medium or high readout, or a cups measurement.

Expanding the menu at the bottom of the main screen lets you set the keep-warm time, wherein the kettle will re-boil in order to keep the water at the desired temperature for a specified length of time.

It’s all relatively easy to follow – but, unfortunately, I experienced the same problems we saw with the iKettle 2.0. 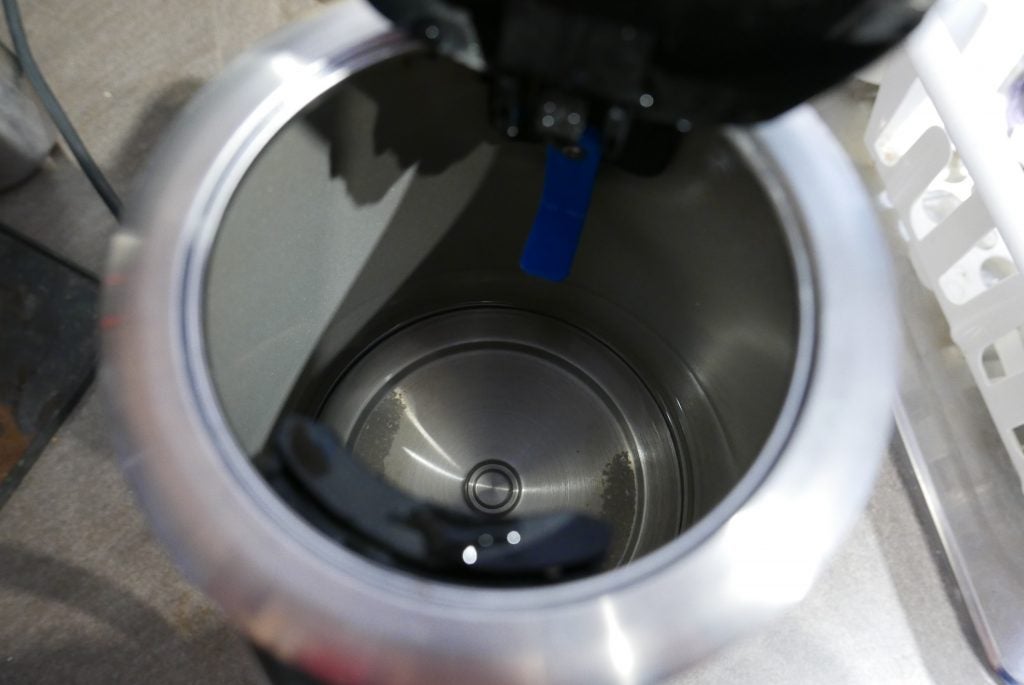 Specifically, the incredibly incremental temperature controls – you can dial up or down by 1 degree – are largely pointless. Say you set it to 80ºC, the kettle will boil to that and give an audible beep to notify that it’s reached that temperature. But then the water will keep heating, typically to 7-8ºC higher than the target temperature.

In the end, I started setting it to a few degrees below the temperature I actually wanted. As with the previous generation, the Smarter iKettle 3.0 is able to at least retain its heat very well.

Diving into the settings, the iKettle 3.0 has other modes, such as Wake Up mode that sets an alarm to boil the kettle. This is useful for having the kettle boiled for when you rise in the morning. For parents of young children, the Formula Mode can automatically boil the kettle and then allow it to cool down to the desired temperature, alerting you once it’s done. Finally, Home mode can have the iKettle 3.0 automatically boil when the geolocation in the app tells it you’re arriving home. 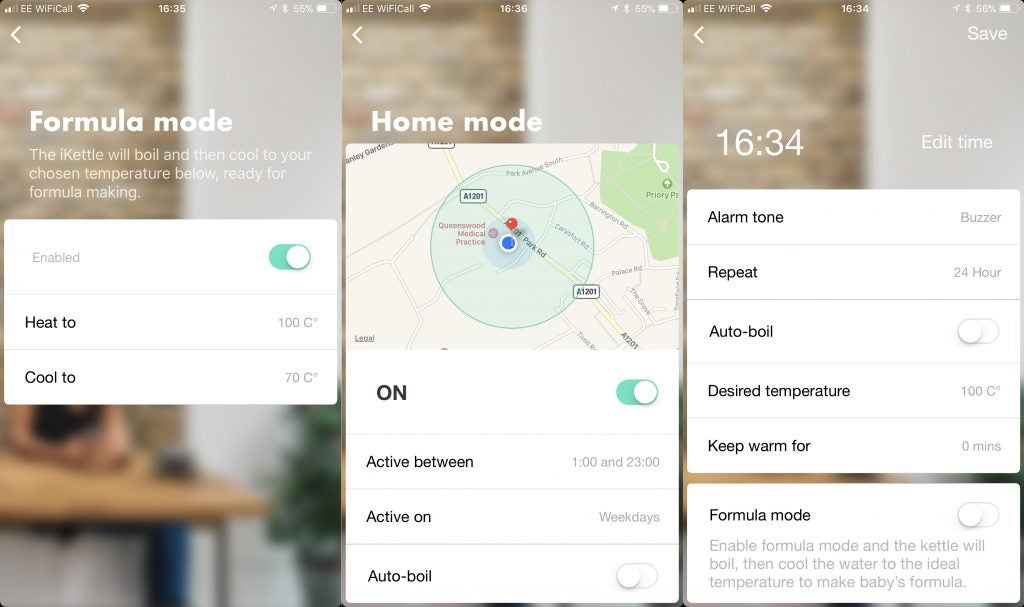 It’s possible to configure the app notifications, so you can receive an alert when the kettle is finished boiling. Strangely, these only worked for me after having had them turned on for a few weeks. I’d get a notification on my iPhone and Apple Watch, but these would be sent even if my partner was boiling the kettle and I wasn’t even home. In the end, I turned the notifications off.

For me, the main selling point of the iKettle 3.0 is its voice assistant support, which wasn’t available in the previous generation Smarter iKettle 2.0. Alongside Alexa and Google Assistant, the iKettle 3.0 can also work with IFTTT recipes, allowing you to be pretty creative.

I use the iKettle 3.0 with Alexa – but the experience didn’t get off to the best of starts. In the first week of use, the voice controls would work only occasionally. This is a problem others have clearly been experiencing based on the Alexa skill’s user reviews. 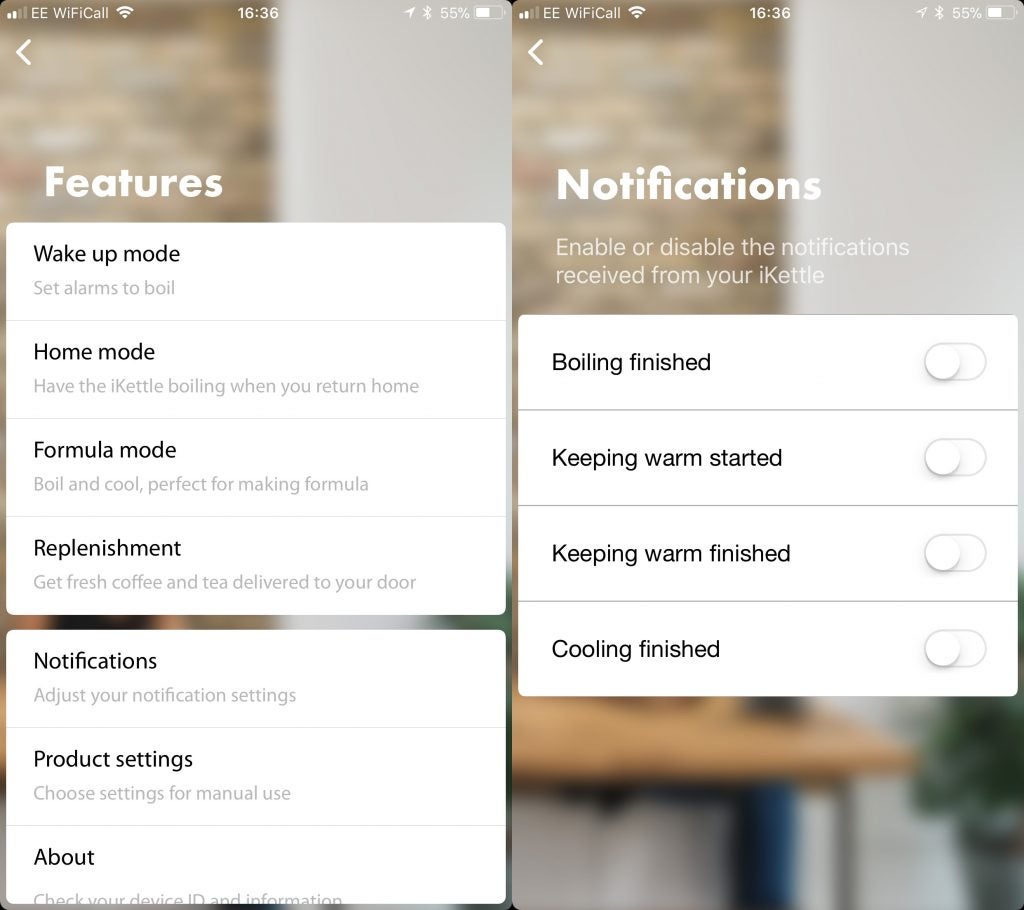 But a week on from setting up the iKettle 3.0, it works fine. Saying “Alexa, turn on the kettle” has the kettle boiling without any issues  – I named the device ‘Kettle’ as it seemed most logical. It’s meant I’ve done away with the Wake Up mode, as I can just ask Alexa to turn on the kettle when I wake – or not, if the occasion dictates. You can also say “Alexa, set the kettle to X degrees” – which, again, is easier than jumping into the app.

Aside from also being able to tell Alexa to turn off the kettle if you decide you don’t want it boiling, that’s it for your voice commands. I really wish the kettle could offer a readout of its capacity; otherwise, you need to keep jumping into the app – or, heaven forbid, get up and manually look inside the kettle to ensure there’s enough water for your next cuppa. 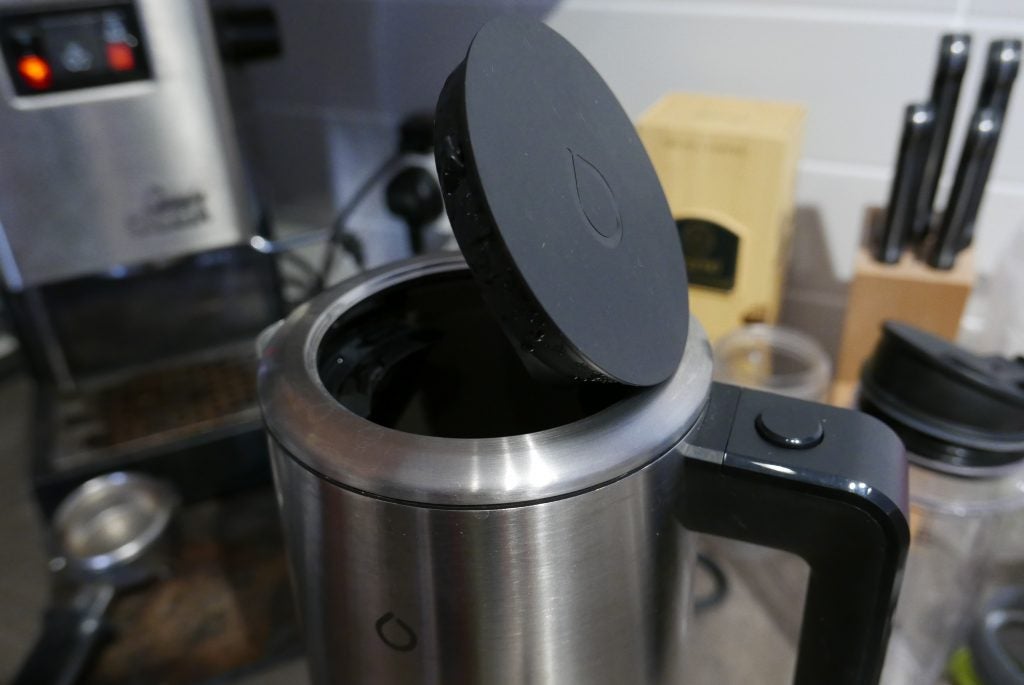 If you’re looking to integrate a kettle into your connected home, the Smarter iKettle 3.0 does plenty right. After what were some teething issues with Alexa integration, it’s quickly become natural to ask Alexa to boil the kettle. It’s a convenience I’m sure I’d miss if it were gone – and it impresses anyone who comes round to visit.

The annoyances are the rather inaccurate boiling temperatures and the process to check the level of water inside the kettle. If you don’t have a digital assistant running the show, it’s also a slightly more difficult recommendation. The app requires a few too many steps to begin boiling each time, which could well become frustrating if you’re a frequent tea- or coffee-drinker.

A smart connected kettle with lots of handy features, but you’ll want to use a voice assistant to get the most out of it.