I didn’t expect to get so angry at a group of slimes breaking into my chicken pen and eating them alive. Not only was it incredibly grim for an experience as cute and wholesome as Slime Rancher, it also meant I’d have to venture into the wilderness for new feathered friends to occupy my farmland. It was a small mission I set myself in a series of wider, more pressing matters.

Monomi Park’s delightful outing is filled with such moments. You’re always pushing forward, whether it’s a drive to make a few extra pennies, or staking your claim as a revolutionary Slime Scientist. It’s a lot of clean, simple fun, but it is consistently held back by minute technical issues and an unusual lack of focus. You play as Beatrix LeBeau – a young, adventurous girl, who finds herself the new owner of the ‘Far Far Range’. Located in the furthest confines of space, the surrounding areas are filled with all manner of unusual creatures ripe for capturing, killing and feeding, depending on the approach you choose.

Wielding your trusty VacPack, you’re ready to take on the world. Well, some of it, as a handful of areas are locked behind virtual paywalls you’ll need to surpass. These obstacles are hugely rewarding to overcome, each one indicating a milestone in your ranching career. However, they do require a fair bit of grinding.

The VacPack pretty much does what it says on the tin. Players can use it to vacuum up the majority of items and creatures they come across. Whether it’s a group of slimes, carrots or mysterious treasures, all of them can be stored and taken back to your farm. Inventory space is limited at first, but upgrades are nice and easy to obtain back at home base.

It can be a frustrating device as you accidentally absorb all manner of objects you didn’t expect. This meant I had to frequently sort through inventory space and banish silly things I either didn’t need any more or never did in the first place. Slime Rancher has a few issues such as this, small hindrances that require only a few changes to make something better. 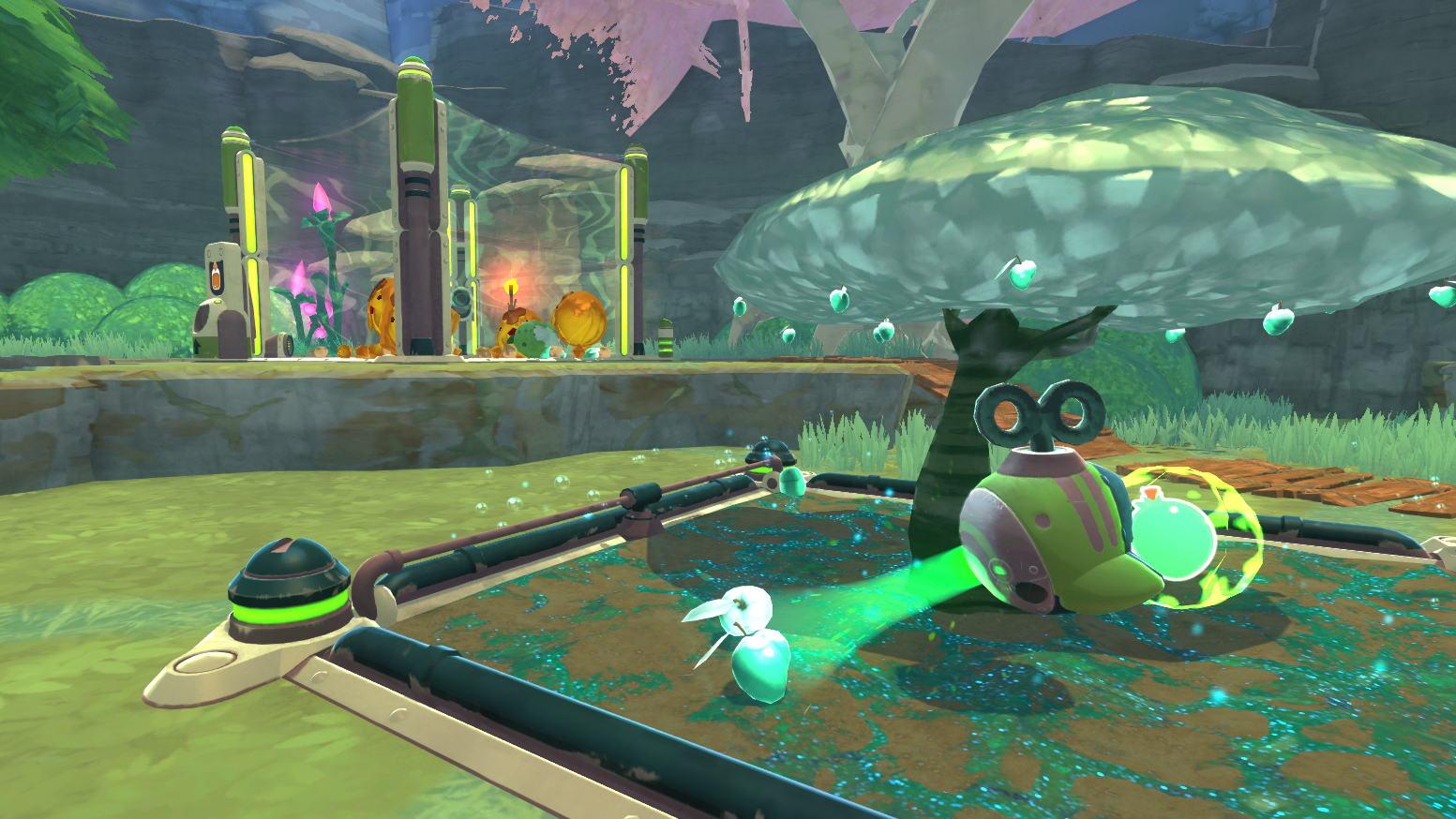 When eating their favourite foods, Slimes produce a valuable resource known as Plorts. This excrement appears to be the lifeblood of Slime Rancher’s economy, and it’s where the majority of your profits will come from. Upon capturing slimes you can throw them into an enclosed pen and feed them for profit.

They’ll try to escape (or eat your damn chickens), so upgrades can be purchased to increase enclosure height or calm them down with soothing music, because there’s nothing like playing a bit of Snow Patrol to stop your slimes from cannibalising one another. Snapping up these enhancements doesn’t cost a whole lot of coins, so it felt like I was hitting a plateau with ranch customisation far too quickly.

You start with a limited number of areas to explore, which are filled with rudimentary species of slime and a few creative secrets to uncover. It takes only a few minutes to understand the myriad systems you’ll be interacting with for hours on end, and then the focus lands squarely on grinding for slimes until you’re an intergalactic ranching kingpin.

New areas, all of which possess a bit of seasonal flair, are unlocked with a substantial amount of currency – and for good reason. They expand the formula in some excellent ways, whether it’s through new discoveries and puzzles, or the ability to breed slimes into fun new variants as a budding scientist. This manner of splicing is another neat mechanic, although the actual modifications are nothing less than binary. 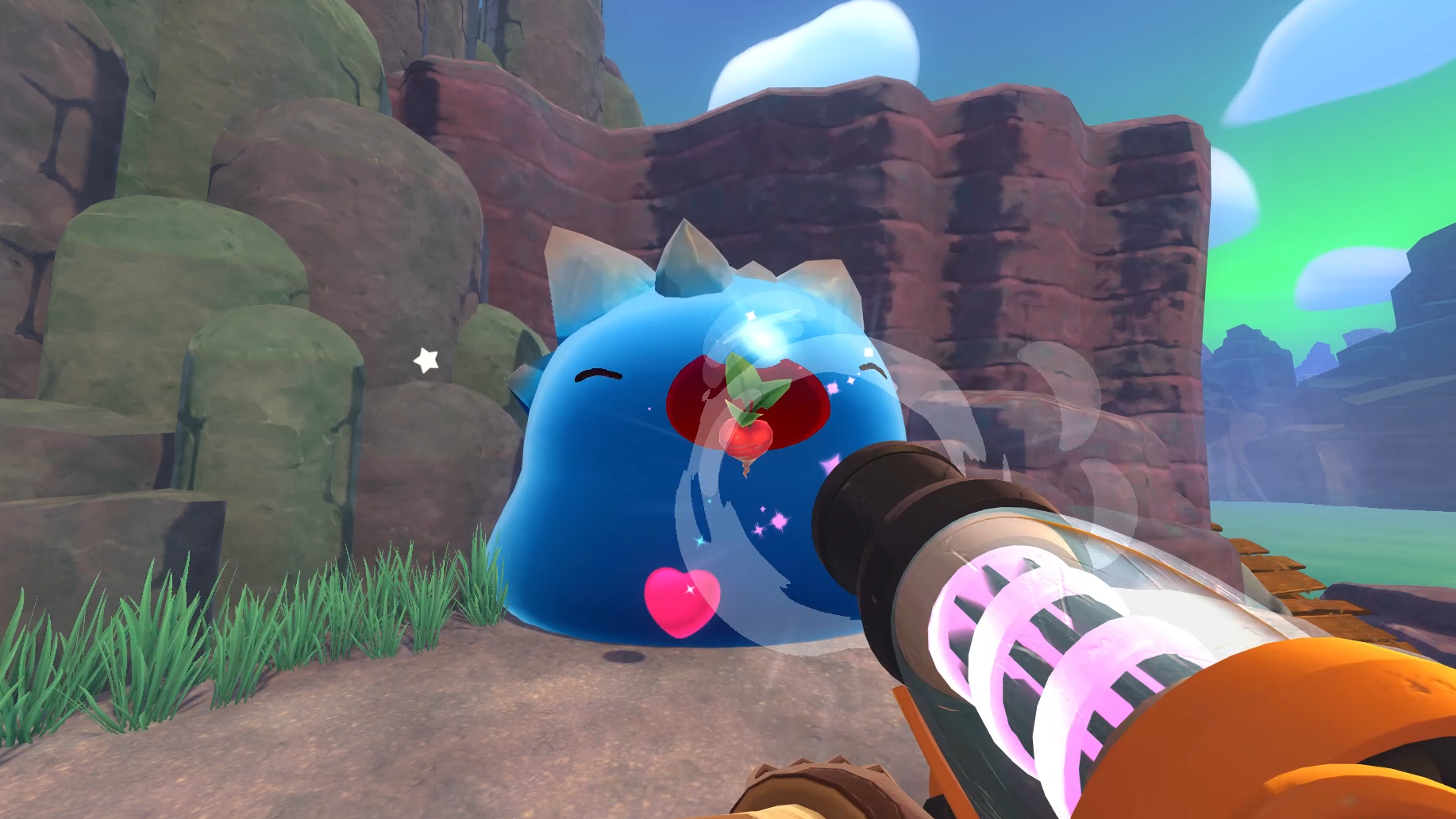 You can breed two slimes together for unique varieties, all with their own temperaments and dietary requirements. It’s frustrating that this is little more than aesthetic dressing, rather than requiring a shift in strategy. Slime Rancher is all about the grind, like a paid version of Cookie Clicker, where the focus is on numbers rising and the obvious satisfaction that comes with this.

It’s enhanced by sickeningly adorable visuals, with almost every living thing plastered with an unwavering smile and fluorescent bursts of colour. It’s undeniably infectious and seldom grows tiresome, thanks to the inventive level design. Once you acquire a jetpack, more complicated platforming becomes part of the equation, leading to deviously hidden secrets and resources previously left unclaimed.

The lack of depth once you begin delving into later levels is disappointing. Aside from creating new slime variants and exploring new areas, the mechanics don’t lend themselves to something in which you can lose yourself. Short bursts of fun can definitely be had, yet beyond its initial charm, Slime Rancher can end up feeling frightening shallow.

A commendable effort has been made to give this world substance, though. At the end of each day, you’ll return home to rest, which is also where your mailbox awaits. Characters introduce themselves with cutesy messages, providing the world with a sense of extra life. You aren’t alone in this universe, and that’s also made obvious by sparse text logs found on your many expeditions.

Slime Rancher is an enjoyable foray into virtual ranching, yet fails to provide enough meaningful depth beyond its adorable visual identity.

Befriending slimes and populating your growing farm with them is engaging at first, and remains so for several hours. Soon after, though, the cracks begin to show.

If you’re satisfied with a lack of depth that can’t possibly extend into a worthwhile conclusion, Slime Rancher is worth investing in, because what’s here is infectiously enjoyable for a time.