The world of high end audio has stubbornly resisted the pressure of advancing technology so far. While consumers across the world have embraced digital music formats and computer audio, the industry that produces the very highest quality separates components has, like a snotty waiter in an overpriced continental restaurant, largely turned its self-opinionated nose up at the idea.


And so discerning consumers – audiophiles as they are so often labeled – wanting a little bit more from their extremely expensive music systems have been ignored. Stick with the old-fashioned way of doing things, one disc at a time, one album at a time or suffer a sacrifice in quality, has been the message from the manufacturers of high-end systems.

Could Slim Devices be about to change all of that with its latest wireless music player? Its Transporter – the big brother to the Squeezebox 3 reviewed here earlier in the year – embraces both the world of high-end audio and computer-based music. To quote the marketing material, this is “the network music player that audiophiles have been waiting for”.


It’s all very exciting and, on paper at least, the menu looks pretty tasty. At the heart of the Transporter is AKM’s so-called ‘miracle DAC’ – the AK4396. This chip, which takes care of digital to analogue conversion duties, has been designed for use in high end SACD and DVD players and has received rave reviews from audiophiles across the web.


A look at the rear panel of confirms the player’s high-end credentials. It’s a veritable Michelin star line-up. Not only is there a pair of gold-plated phono sockets here, it also sports balanced XLR analogue outputs plus coaxial, optical, BNC and professional-style AES/EBU digital outputs. There’s a matching array of digital inputs, too, so you can use the Transporter’s high-end DAC circuitry to process the digital output from other components, and you even get a word clock input. A pair of screw-in stubby aerials ensures reliable Wi-Fi reception, and gives you the option of adding more powerful aerials for improved longer-distance reception if you plan on setting up your Transporter a long way from your wireless router or bridge. There’s also an Ethernet socket here.

Moving to the front of the Transporter’s full-width case, there’s a suitable line-up of shiny, machined aluminium buttons to play with and, in the centre, one great big knob. Now, lewd jokes aside, this is probably the most interesting and exciting knob I’ve ever come across on a hi-fi component. Apart from providing easy access to all of the device’s menus and settings – and being clickable – it also features force feedback. This means that, when you get to the end of a list of albums or songs, the knob stops turning. A bit frivolous maybe, but certainly something to impress your (geeky) dinner guests with. The remote control, although not as impressive as this, is a big improvement on the cheap unit that comes with the Squeezebox. It has a nice, solid heft to it, a lovely piano black finish and cool white backlit buttons that glow when pressed.

And of course, on top of all this, the Transporter is laden with all of the fancy technological garnishes that make the Squeezebox 3 one of the tastiest wireless music streaming devices around. It has a wonderfully clear and bright display that helps you browse through your music collection with ease. It can be used as a wireless bridge so that wired Ethernet-only devices you use in your living room can still interface with your wireless network. You can use it to listen to Internet radio too, while the addition of the Alien BBC plugin gives direct access to the BBC’s DAB stations and listen again services. It’s driven at the PC end by the highly capable SlimServer software, among whose multifarious talents is the ability to stream music to any connected computer. And it’s also compatible with an absolutely huge variety of music files from MP3, AAC, WMA and Ogg Vorbis to lossless file formats such as Apple Lossless, FLAC and WMA Lossless.

As with the Squeezebox 3, the Transporter won’t play DRM encrypted files. However, because the Transporter is principally aimed at those who own systems that will ruthlessly expose the shortcomings of compressed file formats, and those who will principally be listening to their music via lossless formats, it’s not such a big negative.


The feast of features on offer is truly impressive then. But no matter how good the dish looks or how good the ingredients, if it ends up tasting rotten and the service isn’t much cop, you’re going to walk away with a bad taste in your mouth. And in this respect the Transporter hasn’t quite got it right.


Let’s start with the chassis and general build quality. Call me picky, but I think that the Transporter feels a little insubstantial and flimsy for a component that costs a penny shy of £1,300. In fact when the courier first dropped it off, I asked him to wait while I checked the Transporter was inside the box; it just felt too light. And though the display is wonderfully clear, the digital reproduction VU meters, which light up your rack like a Christmas tree, are going to look a touch out of place next to most hi-fi buffs’ minimalist componentry. Luckily, the display can be turned off when it is not required.

Apart from personal preference, though, there is some audio logic to the former complaint. Lighter and more flexible panels tend to vibrate along with the music, and those vibrations can also affect the electronic components inside. Electrolytic capacitors, for instance, used often in the output stages of audio components, are particularly susceptible to vibrations. In fact a popular – and successful – upgrade for CD players is to damp such panels using some kind of heavy material. Lead or bitumen sheeting is often employed in the search for increased performance.

The ultimate gauge, however, of how successful Slim Devices has been in marrying high technology with high-end audio is how the device sounds. And on this front too, I have to admit to being disappointed. There is no doubt that the Transporter is highly capable. Team it with a decent amplifier, cables and speakers and it will reveal the sort of detail you’d never hear from any other wireless streaming music device. On Pat Metheney’s A Map of the World, the atmospherics are wonderful and the guitar notes ring out in a superbly natural way. Andreas Scholl’s piercing vocals are presented in an unforced yet beautifully natural manner and the balanced, understated bass ensures that tracks such as The Prodigy’s Girls rattle along so effectively that it makes you want to get up and pogo on the coffee table.

It is clearly a country mile better than the Squeezebox 3 and Sonos’ wireless music system. But it isn’t, alas, as good as a traditional CD or SACD player of similar price. In back-to-back listening sessions against a Unison Research Unico CD player, which incidentally sells for £100 less than the Transporter, it lacked the punch, presence and sheer excitement on offer from the humble disc spinner. Where the Transporter was clinically accurate, and revealed as much detail, it simply didn’t project the music into the room as much as the CD player did. The imaging wasn’t quite as holographic; the presentation much more laid back. And although these sorts of listening tests are, inevitably, subjective, the difference was large enough that I’d find it hard to believe that, in a panel listening test, that the majority would do anything but plump for the CD player over the Transporter… every time. 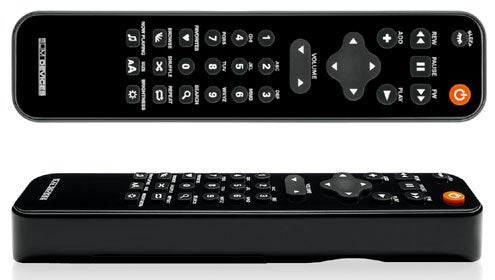 
There is no doubting that the Transporter is a quality piece of equipment. Its combination of convenience and sound quality is simply unrivalled by any other music streaming device. It also represents an important development for audiophiles, bringing the worlds of technology and proper hi-fi closer together than ever before, which is an achievement in itself.


But I couldn’t help but feel disappointed in it, notwithstanding all of its plus points – and that wonderful, force feedback knob.


If Slim Devices were selling this for half the price I wouldn’t hesitate in recommending it. Even at £500 less it would be just about worth it for the sheer convenience factor. But, in my humble opinion, £1,300 is just too much to pay for an audio meal whose flavour doesn’t quite cut the mustard.