What is the Slendertone Connect Abs?

Slendertone is a company with which most people are probably familiar, with many folk able to recall those 1990s infomercials on “toning your abs” without actually having to put in any effort. Those adverts that always featured lean and buff models having the time of their lives.

I’ve always been rather dismissive of the idea of electrical muscle stimulation as a training tool, like many I’ve spoken to. After all, if it were that easy, wouldn’t everyone be rocking a six-pack?

However, having recently tested the Sixpad and actually being impressed by the training benefit, I decided it was time to put aside those preconceptions and give the Slendertone Connect Abs a go.

As was the case with the Sixpad, the results were surprising. I actually came away impressed at the strength benefits gained by using the system for seven weeks. The companion Android and iOS app, which refers to the “Connect” part of the name, is also a useful inclusion.

However, like the Sixpad, there’s a caveat. The Slendertone Connect Abs isn’t going to be a shortcut to some serious abdominals unless you’re prepared to put in the work when it comes to diet and nutrition. You’ll need a low enough body fat percentage for your abdominals to show.

The Connect Abs consists of a small control unit that attaches to a waist belt. On the other side of the belt are three pads to which you attach the conductive gel pads. A pack is included out of the box and this should last 20 to 30 uses.

Compared to the Sixpad, replacement pads are much better value at £11.99 for a single pack, or £23.99 for a triple-pack. This compares with £24 for only a single for the Sixpad – although in fairness, the Sixpad requires six conductive gels.

As a result, the Slendertone Connect Abs doesn’t cover as much of your abdominal muscles compared to the Sixpad, although I didn’t feel like it was providing any less training benefit during testing. The electrical muscle stimulation that triggers the muscular contraction still causes all of your abdominal muscles to work in tandem. If you’re interested in a deeper look at EMS training, have a read of my Sixpad review. 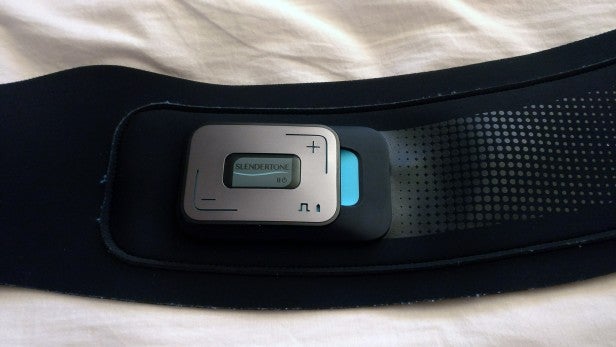 Before you can start, you first need to pair the control unit with your smartphone or tablet through Bluetooth. The Slendertone app is available on iOS or Android. During setup it is possible to establish your aim through the different Programs. Choices include: Essential Toning, Post Natal and Fitness.

I opted for the latter, which delivers 200 contractions in a 30-minute session. I decided this would be a good training aid alongside my standard powerlifting training. 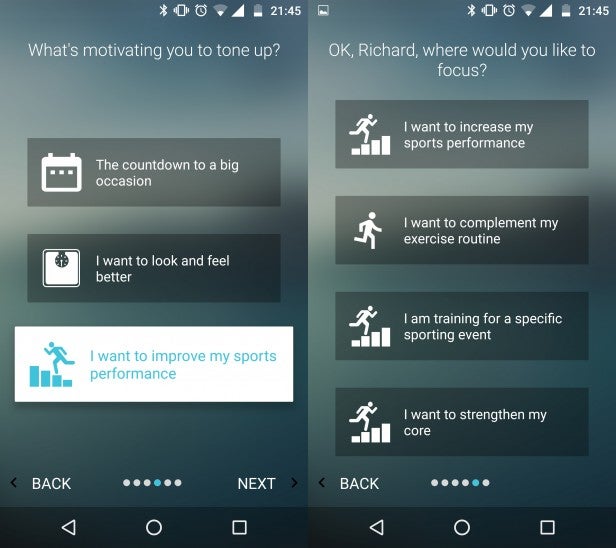 I chose to “strengthen my core”. By keeping tabs on my strength training performance, I could get an indication of whether my abdominal muscles were getting stronger as a result of the Slendertone.

Once you’re paired with the app, you select the intensity of the electrical muscle stimulation by dragging a control slider. A graph shows the intensity of the program – the intensity will fluctuate during a session – and how much time is left. You can turn on uninterrupted mode as well. By default the training will pause if you leave the app or receive a phone call.

You can also adjust the intensity using the control buttons on the main unit, although with 100 levels of adjustment, it’s going to be difficult to be specific without a screen.

Its greater number of intensity levels gives the Slendertone Connect Abs an advantage over the Sixpad. The Sixpad has only 15 levels, and I quickly found that I reached the top level and it was no longer sufficient for any additional training benefit.

Linear progression is important in all facets of training, so being able to continually increase the intensity over time is very important. 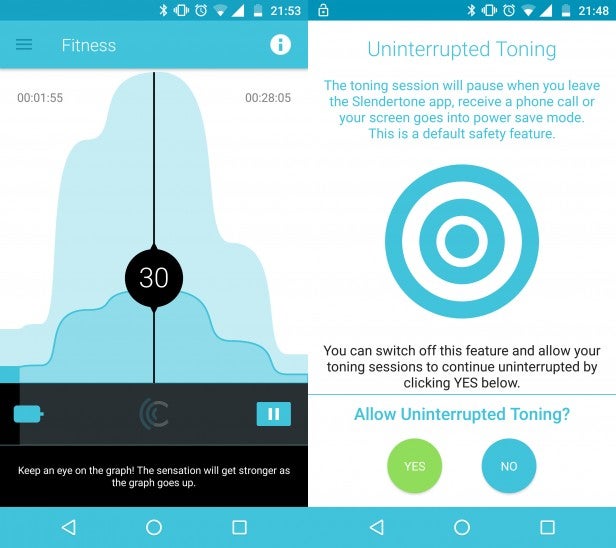 Conversely, when I first started using the Connect Abs, I had to start out on just 35, which already felt pretty intense. Gradually, I upped the intensity session by session as my abdominal muscles became stronger and adapted; I currently use it set to 80. This still leaves room for further progression.

Actual training sessions can be quite intense. While it is possible to multi-task to a degree, anything that requires real co-ordination or concentration can prove tricky. Kicking back and watching TV while using the Connect Abs is certainly a welcome possibility, though. 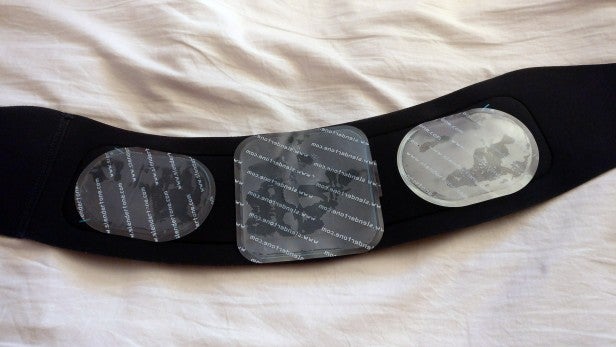 You need to be quite specific when positioning the three contact points, however. If the two side points are too low and close to your hip bone, the electric stimulation will cause a tingling sensation in your legs. If this happens, simply pause the program and readjust the placement a little higher.

Having used the Connect Abs for a few months now, I’ve also found that occasionally it can be a little painful if the pads are placed erroneously. Mainly from the pads towards your obliques, where you can get a mild stabbing pain when the intensity is set particularly high – a bit like the electrocution from a Pavlok device that gives you a small electrocution to try and get you out of bad habits. Pausing and re-adjusting alleviates the issue at least.

Annoyingly, there’s no notification-based facility to send out reminders regarding your daily training. The app can only create a separate Google calendar with reminders, which isn’t really an elegant solution.

Other minor annoyance is that the Connect Abs never automatically connected to my Android phone, even when the app was open and looking for it. I’d have to dive into the Android Bluetooth menu and select it each time, and even then it would take a few seconds before the app connected to the device.

For a short period, there was a bug in the Android app that meant the belt wouldn’t operate when paired. In Slendertone’s defence, this was corrected pretty quickly and those affected were offered free replacement pads as compensation for the inconvenience. The belt still worked when not connected to the app when using the onboard controls, too, so it wasn’t the end of the world. 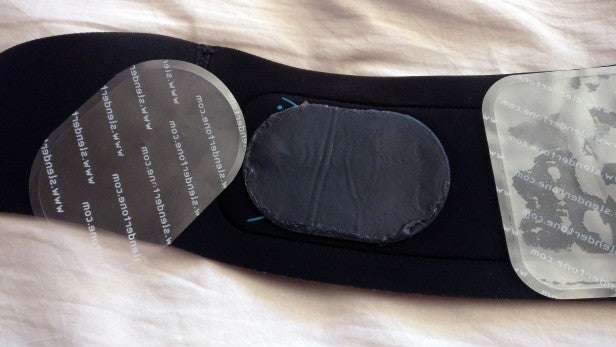 After your session is complete, you need to re-attach the protective plastic to the conductive gel pads. This isn’t particularly elegant either, but it does the job. A storage bag is included but it isn’t great quality.

The Connect Abs has a built-in rechargeable battery, which I found needed charging only around once every three weeks. Charging simply requires popping the control unit out of the waistband and plugging in a micro-USB cable. It’s more convenient than using watch batteries with the Sixpad.

Next
Does it work & verdict Review