Wireless headphones have been around for quite a while but they’ve invariably suffered from a multitude of problems. First and foremost is the simple fact that if they run out of battery power they’re unusable, which limits their appeal for long travel. Secondly, they can be large and unwieldy or, like the Sennheiser MXW1’s, look frankly ridiculous. Then there’s the simple fact they can just sound rubbish. However, Sleek Audio could finally have solved all of the above problems with its W1 wireless headphone adapter.


It’s designed to be used with Sleek Audio’s own impressive SA6 customisable headphones and can be bought separately or bundled with said headphones, which will save you £10 off the total cost. This isn’t exactly a game changing discount but “it’s better than a kick in the teeth with a wet fish”, as my old man says. 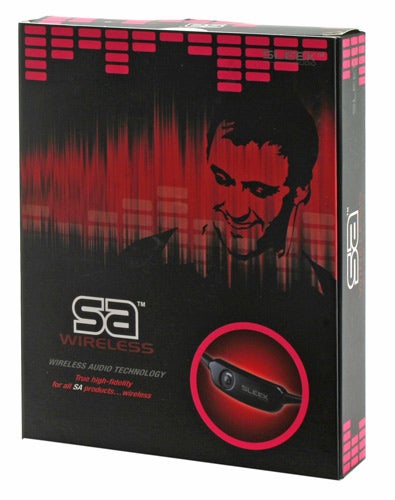 What really sets this adapter, or the bundle, apart from the competition, though, is that the customisable nature of the headphones means you can remove the driver unit/ear piece from the wireless adapter and plug them onto the normal SA6 cable, solving our battery problem outright. And while it may sound like extra effort to constantly carry around a spare cable, just in case you do run out, the 10 hour battery life rating means you shouldn’t actually need to have it with you on most occasions. 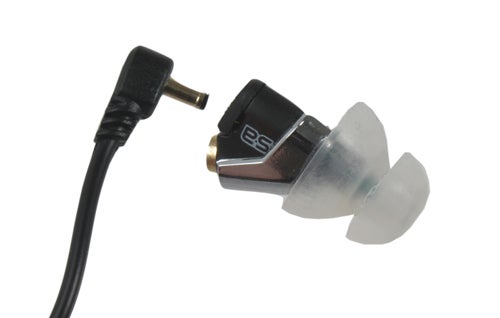 The adapter itself consists of two parts (not including the earphone units themselves); a transmitter and a receiver, which communicate using a 2.4GHz radio link developed by Kleer. This has enough bandwidth to transmit lossless CD quality audio and up to four receivers (from multiple brands) can be used with each transmitter.


Range is quoted at about 60 feet, which we found to be accurate in an open air environment but through a brick wall or even through thick clothing, this quickly dropped to sub 20 feet. Still, it’s enough that it gives you all the freedom you should need. Just don’t expect to be able to plug the transmitter into your hi-fi downstairs and listen in your bed on the third floor. 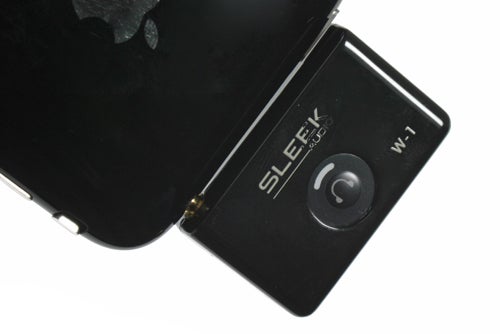 The transmitter is a large black lozenge with a 3.5mm headphone jack poking out of one side. This plugs into the headphone socket of your Portable Media Player (PMP) and the volume is controlled using you player, rather than a separate inline control on the adapter. The position of the jack plug means the lozenge sits flush with your mp3 player so it looks neat and tidy. However, this does mean it won’t fit on players that have any sort of case as these will push the headphone plug out of its socket.

Meanwhile, the mange-tout shaped receiver module is designed to fit round the back of the neck and the short cables to the earpieces run up and over your ears. The cables can also be worn hanging straight down from the earpieces but this is less comfortable and not very secure. The length of the cables can then be adjusted by making a loop out of the excess and pushing it through the gap in the receiver (this isn’t some botch job method we made up; it’s designed to do this). 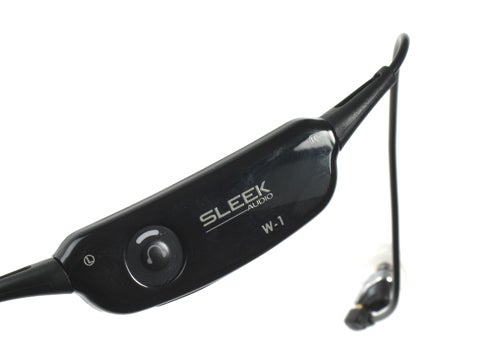 Overall, the receiver is surprisingly comfortable and feels incredibly light. We had no problems using it for an entire day at work or for extended sessions at the gym, where we found the lack of cables a particular bonus. That said, exercising that jolts you around, like running and aerobics, did tend to work the phones loose after a while.

This is one area that, perhaps, could have been improved if Sleek Audio had included some alternative tips to the double-flanged silicone ones that come with the SA6s. This was something that we cited as a problem in our original review of those headphones and the omission is even more apparent here. You can buy alternative soft foam tips made by Comply, but we didn’t get a chance to test these so can’t vouch for how they perform – though both Comply’s own NR-10 headphones and the Philips SHE9850 use Comply tips and they impressed us.


When you receive the adapter, the transmitter and receiver are already synced but if they somehow lose sync or you want to synchronise more receivers there’s a quick and simple procedure for doing so, which is clearly explained in the manual. Otherwise, it’s just a case of holding down the power buttons for a couple of seconds each time you want to turn them on – they turn off automatically once music stops playing (in this standby state the batteries will last around 7 days). 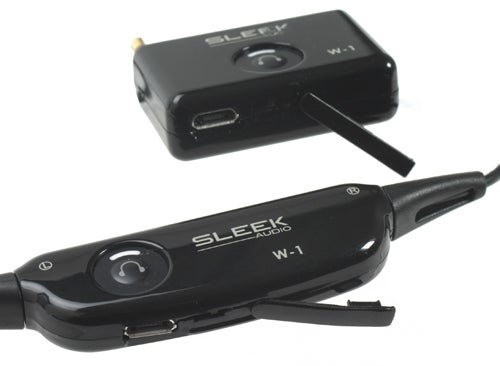 Both modules are charged via microUSB and a USB to twin-microUSB cable is provided for doing this. Next to the charging sockets are tiny switches for properly turning the modules off to save battery life (the batteries will still naturally drain down over a period of about three months).

A foam pouch comes in the box, which can be used for storing the adapter, phones, spare cable, and any other bits and bobs you may want to keep with you. We appreciate that Sleek Audio has heeded our advice on the overly complicated case that originally came with the SA6 headphones and has gone for something simpler this time. However, I can’t help think the pendulum has swung a little too far the other way. Considering the fairly premium price of this product, I’d hope to get a pouch that at least zips shut, so I can be sure I don’ lose any bits (Shure’s semi hard case is a good example).

Aside from the pouch, you don’t get any other accessories with the W1 bought separately. If you buy the bundle, though, you also get the replacement tips, tip cleaner, cable, bass and treble ports, and treble tip removal tool that come with the SA6 phones. The bass + port has also been updated to a new bass ++ which is meant to give a bit more kick to your bass lines. 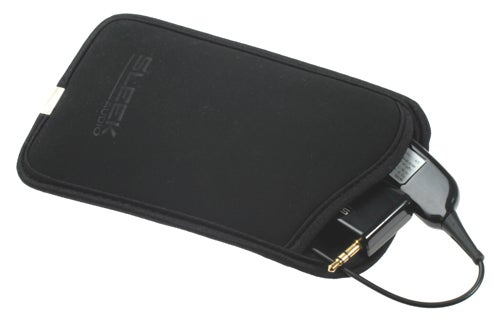 Sound quality is largely determined by the SA6 earphones, which we do think are rather good with the cutting-edge extended-range drivers providing fuller bass than we’re used to from a single driver design while maintaining an impressive level of clarity at the top end. However, there is definitely a very light background hiss added to the proceedings, by the W1, that could prove distracting if you listen to a lot of classical music with quiet passages (solo piano, quartets, that sort of thing) for instance. However, for the most part this hiss was masked by even fairly quiet track audio and also by the murmur of background noise that will inevitably leak through the phones.


One small complaint we did have was that when you plug the receiver into an audio source and also when you turn the adapter on it causes the headphones to thump and crackle (as audio devices tend to when you unplug or plug inputs), which can be loud and painful if you’ve already inserted the earphones. It’s an easy scenario to avoid but does catch you out every now and again. 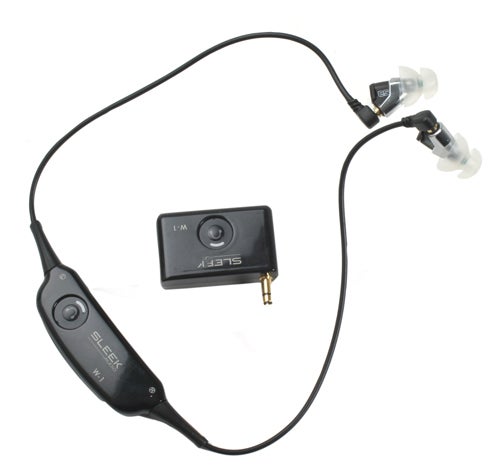 Overall, though, we really like the W1. Unlike Bluetooth headphones, the wireless experience can be used with any audio source, the receiver is very comfortable and unobtrusive, and the audio quality is impressive. The only real problem is the price, which at £100 is simply too much for us to outright recommend it. It’s not extortionate but you should probably have a good long think as to whether you really need your earphones to be wireless.


The Sleek Audio W1 wireless headphone adapter is a great product and, whether bought separately or bundled with Sleek Audio’s SA6 headphones, it is one of the best wireless audio systems we’ve used. You do, though, pay quite a premium for ditching those wires and we feel the price needs to drop a little before we could recommend them to everyone.